December 09, 2008
I received a note in the mail from Andy of the must-see 78 Topps blog the other day. The note read thusly:

Short and to the point. You may interpret "yo" as "hello" or "what's up" or "how y'all doin' out there tonight?" But I interpret it as "give me your own personal top-10 countdown of your favorite 1978 Topps baseball cards."

I'd be happy to Andy.

Keep in mind, this is my list, assembled in a matter of minutes during a Monday afternoon of making sure the dog didn't do any MORE damage to the Christmas tree. So I may have been distracted. Here we go: 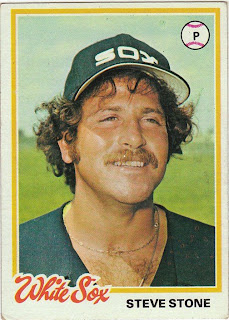 10. Steve Stone, White Sox, card #153: I was tempted to put this card at No. 1. If someone had to pick one card to sum up the 1970s, this is it. Long, curly hair, mustache, open collar, gold chains, wacky White Sox get-up. This photo has it all. All Stone has to do is lose the cap and don a white jacket and he's ready for Studio 54. 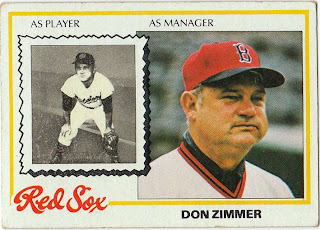 9. Don Zimmer, Red Sox, card #63: I've mentioned a couple of times that I think the '78 manager cards are the best manager cards of all-time. The Muhammad Ali of manager cards. And this one is the best of the best. Zim was quite the figure in '78. I love the fact that he has a chaw going in both the manager photo and the player photo. (dirty habit, kids, don't imitate). 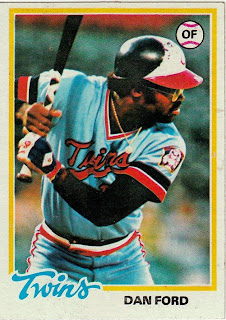 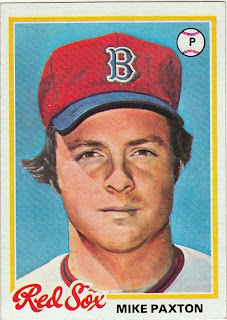 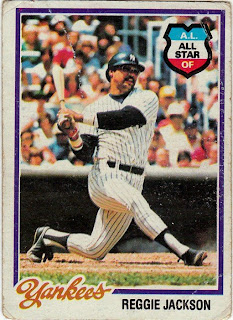 6. Reggie Jackson, Yankees, card #200: (my copy of the card is in need of an upgrade). A great shot of Reggie's swing follow through, the signature left knee on the ground. This pose usually signified a swing and a miss for Reggie, which is why the card was one of my favorites as a kid. I did love to heckle Mr. October. 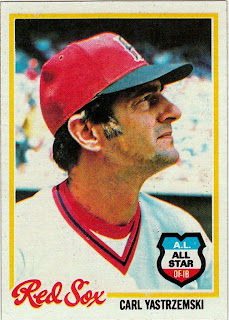 5. Carl Yastrzemski, Red Sox, card #40: Yaz was a veteran, an all-star and The Captain. He was all business and concentration on the field. This portrait shot captures him perfectly. 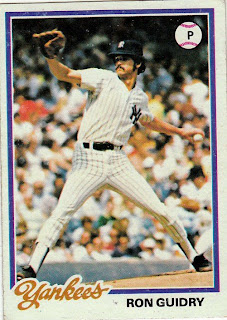 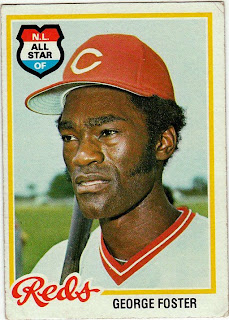 3. George Foster, Reds, card #500: Forget Eddie Murray or the Molitor-Trammell rookie card. In 1978, this is the card you wanted to get as a kid. Foster was bad ass. His 52 home runs in 1977 was as mind-blowing at the time as the numbers McGwire and Sosa put up 20 years later. But Foster was legit. I was thrilled when I pulled this card. Love the black bat, too. 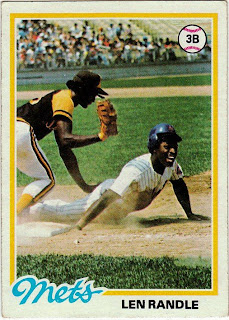 2. Len Randle, Mets, #544: Randle always seemed to be in pain in his card photos (see his 1975 card in this post). This may be a rather mundane action shot these days, but we really thought it was cool 30 years ago. Randle's expression, his head first slide (not all that common then).
I've always been puzzled by who is applying the tag on the play. It looks like Jerry Turner, but Turner was an outfielder. No one else on the '77 Padres team resembles that player. I also don't know what bag that is -- first, maybe? 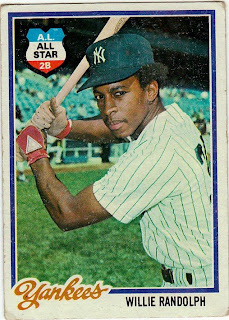 1. Willie Randolph, Yankees, card #620: Perhaps this choice surprises some people. I think it's simply a great card. Great pose, great camera angle, great look on Randolph's face. I love the colors in the background, I love the all-star shield.
The 1978 set is special to me because it is the first complete set I ever saw. My brother ordered away for it that year. We thought it was fantastic to have a complete set of our very own. We even took a snap shot of it: 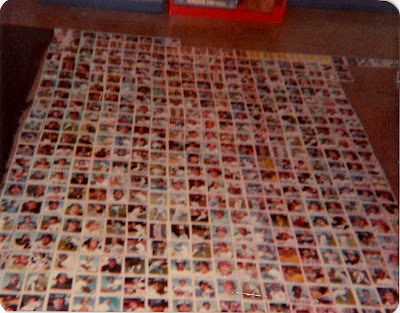 That's not the entire set. I must have taken the photo before all the cards were put out because I didn't think I could get the whole set in the shot. The cards are arranged by team (in case you care, from left to right it's: Rangers, Indians, Angels, White Sox, Padres, Brewers, Giants, Royals, Expos, Tigers, Phillies, Reds, Mariners, Pirates, Orioles, Mets, Twins, Dodgers, Cardinals, Red Sox)
I almost forgot that Andy sent a few cards along with his note. Somebody else beat him to the '86 Topps that he sent, but he also threw in a couple '87 Donruss Dodgers that I needed. 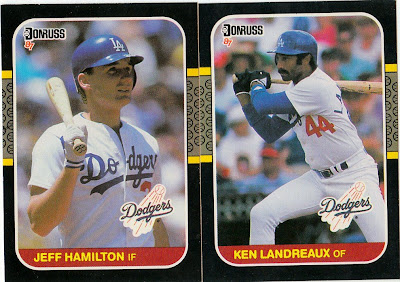 Thanks, Andy. Cards coming your way this week.
I'm sure anyone reading this is also reading the '78 blog, but on the off-chance you're not, Boogie Oogie Oogie on over there and check it out. For me, it's a great nostalgic rush.

MMayes said…
I think it's Gene Richards at 1B. He's the only black Padre who played 1B in 1977. Then, you go through box scores where Gene played 1st against the Mets in a day game when Lenny Randle played and you get to July 31.

In the bottom of the 3rd, Lenny singled and the play account says he was picked off, but there was an error on pitcher Dave Wehrmeister and Randle went to 3rd.

This card looks like it could be that play. The ball has just gotten away from Richards and Lenny's diving into first and looking to see where the ball is so he'll know whether to go.
December 9, 2008 at 1:02 PM

night owl said…
So it's Richards! I just dismissed him because I didn't think he ever played first. Thanks.
December 9, 2008 at 1:40 PM

Cliff said…
Mr. Mayes is a genius! I did the same analysis, and came to the exact same conclusion: