December 29, 2008
Here is a post about various items, none of them particularly related except for the fact that they all have to do with baseball cards.

First, even though I already responded to Dinged Corners' New Year's Baseball Card Questions in the comments, I noticed that others had responded on their own blogs instead. I've enjoyed reading their responses, which are much more detailed than any comment can be. So, I figured I'd do that, too. Some of these questions I've already rambled about, so bear with me.

1. If I didn't collect baseball cards, I'd collect ---
A: I don't even like to think about this. It's like asking me what I'd do if I was a girl. I like myself just the way I am thank you! Anyway, I suppose I'd collect baseball magazines or yearbooks or something like that. I did a little of that when I was a teenager. If there were no cards around, I'd still have to keep it baseball. 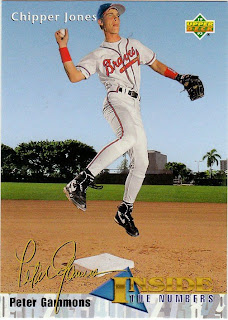 I mentioned this once before in the early days of this blog. I am in awe of players who look and play like they were put on this earth specifically to play ball. There are very few of those kinds of players. Even players with a ton of talent don't qualify. It's a trait that's kind of hard to define. But Chipper Jones is definitely one of those players. I mentioned this before: if Major League Baseball ever decides to change their logo, they should make it the silhouette of Chipper Jones. Because he is baseball in many ways (Keep in mind, I do not even like the Braves, that's how much of an impression he's made).

3. Every New Years, I resolve to --- my collection.
A: Organize! I have reached the letter "H" in my card-cataloguing system. It has been grueling. I know what it's like to write stories for a living. It's not quite that grueling. But the drudgery factor, on a scale of 1-10, is about a 14.5.

4. If I could spend a day with one person from baseball history, it would be ---
A: Pee Wee Reese. 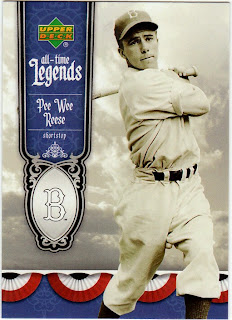 I know a lot of people answered Jackie Robinson for this question, which is cool. Here is why I answered Pee Wee Reese. Robinson's story has been told, by him and others, tons of times. I'm sure he could tell you some stuff you've never heard, but I've heard a lot of it already. Plus, as a white man, I confess there are some things that African-Americans had to endure during the 1940s that I would have a hard time grasping, because I did not have that background. Fascinating stories, yes. Awful stories, yes. But I think Pee Wee Reese's role would be something I could relate to even more. We are linked by skin color, as sad as that is to say. If I was a ballplayer for the Dodgers during the 1940s, logic dictates I would be Reese, not Robinson.

I am always interested in people who are thrust into a situation in which they have to choose between what is popular and what is right. Reese was a white athlete. (A southern, white athlete, at that). He made the right decision and befriended and supported Robinson. That could not have been easy. I would love to hear about why he made the decisions he did and what he went through. Plus Reese began his career at the start of Brooklyn's great run, and he was there until the end. There were some great stories there.

On to Lucy's questions (they're not so heavy, man):

1. What is your favorite kind of dog?
A: A beagle. Our dog is mostly beagle, but he's got a little Basset Hound in him. 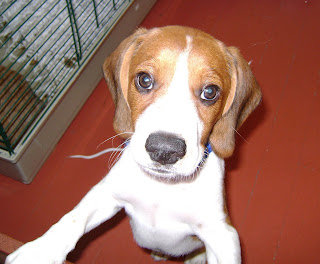 There he is. Ain't he cute? He's also a baseball-card chewing, Christmas ornament-chomping, pillow de-fluffing troublemaker.

2. Who is your favorite baseball player?
A: My favorite ballplayer of all-time is Ron Cey, former all-star third baseman for the Los Angeles Dodgers. My favorite current player is more difficult for me to answer. As you get older (I'm not older than the oldest active ballplayer, but I'm getting there), it's harder to relate to the younger players. The generation gap starts to interfere. I guess I'd say Russell Martin, but I could change my mind tomorrow. 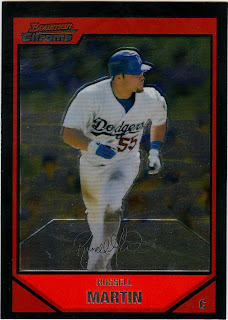 3. What is your favorite team?
A: Oh, if only these questions could have been on my college exams! The Dodgers. Brooklyn, Los Angeles, it doesn't matter. Did you know the Dodgers were once called the "Bridegrooms"? Yup, they were.

4. What is your favorite baseball movie?
A: "Field of Dreams." I fully realize that it's sappy. But there is a lot of important stuff in that movie. And how can you beat a movie in which "Moonlight" Graham and "Shoeless Joe" Jackson are key parts of the story?

5. What is your favorite baseball book?
A: It's a series of books, actually, by writer Roger Angell. In my opinion, he is the best baseball writer to have ever existed. He has written for "The New Yorker" for a long time, and the stories in the books are taken from those magazine articles. His books (I have five of them) are about the baseball players and the subjects of the time. Angell loves the game, but he doesn't get sappy.

Among my favorite stories: Three grown men who live and die for the Tigers during the early 1970s; the demise of Pirates pitcher Steve Blass; the 1975 World Series; a great, great article about Bob Gibson; the 1986 World Series (Angell is both a Mets and Red Sox fan, so this is a terrific read), and lots of other great stuff. From the 1960s all the way into the 21st century -- Stan Musial to Barry Bonds -- he's seen it all. 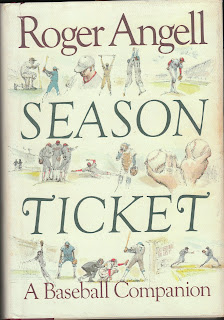 6. What is your favorite card?
A: I think this is the third time I've featured this card on this blog. But I don't mind. It's my favorite card! It's a 1975 Topps Ron Cey. There's a story behind it, but I've told it already. 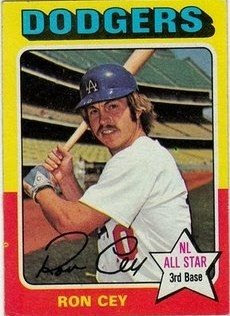 Those are my answers. So nice of you both to ask!

And, that was a little longer than I had planned. The other two items I wanted to mention are shorter.

Second item: I finally was able to get to the store and buy some baseball card materials (I got stuck behind a woman buying a boatload of half-off Christmas stuff and discussing with the clerk in great detail how much she saved).

I purchased a much-needed binder and sheets, and put together all of the 1986 Topps cards I had received from various bloggers. In the process, I discovered another card that I need: No. 46, Billy Hatcher. I've added it to the want list, along with No. 102 (Joe Orsulak). The other two cards I need are on their way to me, I believe. Also, I discovered I have about 50 or so doubles. If anyone is looking for '86 cards (I'll be sure to reserve some for Rod of Padrographs as soon as he finds out what cards he still needs), I might have some.

Third item: deadline for entering the contest is January 1st, and I'll announce the winner later that day. Keep in mind that not only will I send the winner all those cards along the sidebar, but I'll try to find something you're especially interested in and send you that, too (I'm not stocked with 1 of 1s and autos, though).

Thanks, as always, for reading.

Dinged Corners said…
I have that exact edition of Season Ticket on the nightstand. What a fine writer. The pup is not cute, no. We're sorry to disagree. HE'S ADORABLE. We are hoping his name is Snoopy.
December 30, 2008 at 3:07 AM