Well, there is a foot of snow outside ... 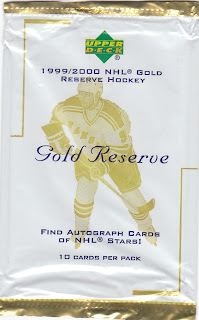 This is a pack of 1999-2000 Upper Deck Gold Reserve sent to me with my baseball goodies by Captain Canuck of Waxaholic. The Captain is known for throwing in a pack or two of hockey or basketball cards with his packages. Thank Gordie Howe that he sent me hockey cards. I know zip about the NBA. I'm pretty certain I've never watched an NBA game from start to finish in my entire time on this planet.

That said, I don't know much about hockey anymore either. I was quite a fan in the '90s, but hockey has gone the way of football and other sports now. For me, it's baseball or nothing.

So, it's a good thing this is a pack from almost a decade ago. I can revisit some of the players I knew and catch up on what they're doing now. And since Hockey Night in Canada is only about 13 hours away, my timing is just about perfect. 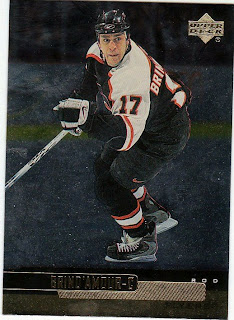 1. Rod Brind'amour
Then: Flyers (good golly, I hated him then).
Now: Hurricanes (the captain and winner of a Stanley Cup championship in 2006)

2. Arron Asham
Then: Canadiens
Now: Flyers. He's bounced around since with the Islanders and Devils. He now leads the Flyers in penalty minutes, which, considering the franchise's history, is a decent feat. 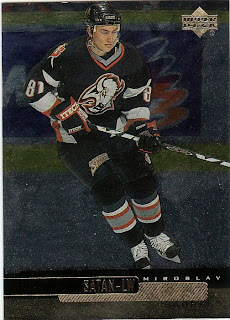 3. Miroslav Satan
Then: Sabres (one of the heroes of 1999 for Buffalo)
Now: Beelzebub on Ice is in his first season with the Penguins. He's third on the team in scoring, but kind of overshadowed considering Nos. 1 and 2 are Evgeni Malkin and Sidney Crosby

4. Lubos Bartecko
Then: Blues
Now: Playing for a team in a league in Sweden (no, I'm not going to spell it). He hasn't played in the NHL since 2003. He missed all the lockout fun!

5. Mike Ricci
Then: Sharks (and before that, he skated for the much despised Quebec Nordiques)
Now: Geddy Lee's doppleganger has been retired since 2007 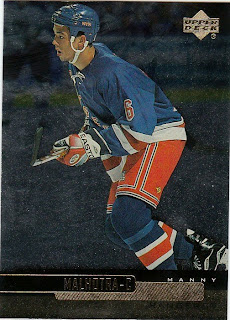 6. Manny Malhotra
Then: Rangers. The second person of Indian ancestry to play for the NHL was a sensation for New York in 1998-99 at a mere 19 years of age.
Now: Blue Jackets.

7. Zdeno Chara
Then: Islanders
Now: The tallest player ever in the NHL (he's 6-9) plays for the Bruins. While looking at his wikipedia page, I suddenly felt inadequate. Not only is Chara a fine player, but he speaks five languages and has climbed Mt. Kilimanjaro. Me? I'm hoping I spelled Kilimanjaro correctly.

8. Pavel Bure (this is a pretty nice pack)
Then: Panthers
Now: Bure retired suddenly in 2005. The "Russian Rocket" is the GM for Russia's Olympic hockey team 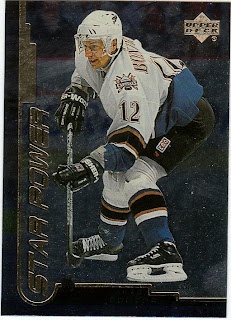 9. Peter Bondra, Star Power
Then: Capitals
Now: Retired in 2007. Now GM of Slovak national team. (Could have fooled me, I thought he was still playing)

Thanks for the pack, Captain. I won't be tuning into Ron McLean and Don Cherry on the CBC tonight because, for the millionth time in a row, I have to work Saturday night. And, like I said, I'm really just a baseball guy.

Which is why I appreciate this: 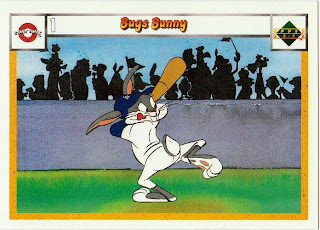 Bugs in a Dodger hat! There's the the baseball card in this post! Thanks again, CC!

Also, I wish we had a foot of snow! It's December, and it hardly even feels like winter. Temps have been in the 50s for weeks. When we went to find a Christmas tree, there wasn't a hint of snow to be found.
December 7, 2008 at 3:15 AM

Captain Canuck said…
You are welcome my friend. I'd recommend to Joe to put Bugs at short. He'd be a fine replacement for Raffy.
December 7, 2008 at 11:58 AM