Cards to soothe a disgusted fan 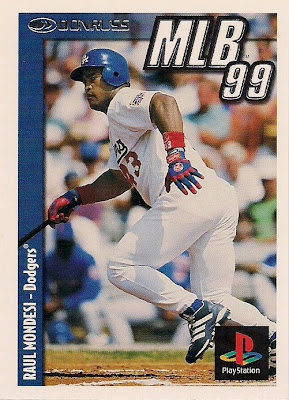 It's because it actually gives them control over a baseball team, which as any fan will tell you is something that NEVER HAPPENS AT ALL!!!!

I devoted a good seven hours yesterday to the Dodgers game. I hadn't intended on giving it that much. But when you live where I do, you grab onto any chance you get to see your favorite team on free television and you do not let go ... for anything.

The Dodgers were playing the Cubs on WGN. The game was delayed almost 3 hours because of rain. So while I waited out the delay, switching back over and over ("no, now they're airing Cheers" ... "no, now they're airing America's Funniest Home Videos" ... "hey, whatever happened to Daisy Fuentes?"), to see if the game had started, the Dodgers stayed foremost in my mind the whole time.

Finally, the game began, and it was a piece of crap as far as this Dodger fan was concerned. Sure, my team held the lead for most of the game. But they tried to give it away with virtually every pitch, every at-bat, every ground ball sloppily fielded. It was one of those games that I just knew would end poorly.

Lucky me, they decided it wouldn't end poorly until the 11th (yeah, yeah, I know the Red Sox have me topped by going 17). And when they finally walked in the winning run, and I saw the Cubs celebrate a victory that they should have had wrapped up in the 6th inning, I burst -- airing my disgust to my wife, who I'm sure was only vaguely aware there was a game on for that entire time.

I'm still fuming a little bit, so I'm showing some cards I received from The Baseball Card Snob himself. I'm hoping that seeing a few of these will make me forget Javy Guerra, and the drunks at Wrigley, and Bob Brenly's annoying rooting.

Paul gave my want list a thorough review and produced a bunch of cards from the '90s that I needed. Most of these cards are from sets that I never collected because they arrived during the years when cards were about as valuable to me as beanie babies.

So I don't have a lot to say about them. But given my disgust, that's probably a good thing.

I'll start with some late '90s Topps Gold Label. One of these cards is from a different year than the other two. I can barely tell the difference between the two years, and Gold Label adds to the confusion by issuing multiple versions of the same player. ... I don't think card companies really wanted anyone to collect their cards in the '90s. They seemed to do so many things that would prevent people from wanting to buy their product.

I scanned these 2002 Leaf Rookies and Stars cards just because I like the red. As a Dodger fan, I don't get to see red on cards that much. 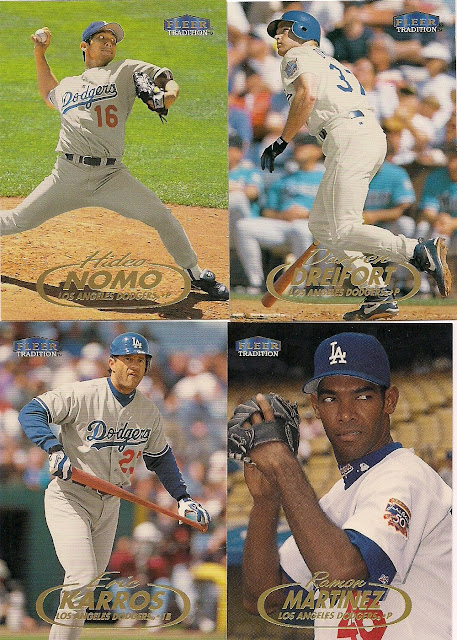 Guess which 1998 Fleer Tradition card I like the best?

That's right, any Hideo Nomo card that I don't have automatically is a candidate for best card in the package  (speaking of which, I haven't done one of those posts in a long time). 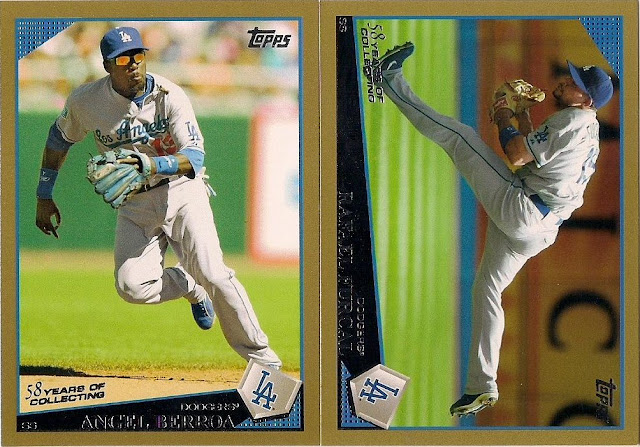 Two golden shortstops who aren't Dodgers anymore (I'm suddenly realizing that these cards aren't all from the '90s).

How is it possible that Furcal isn't injured yet? 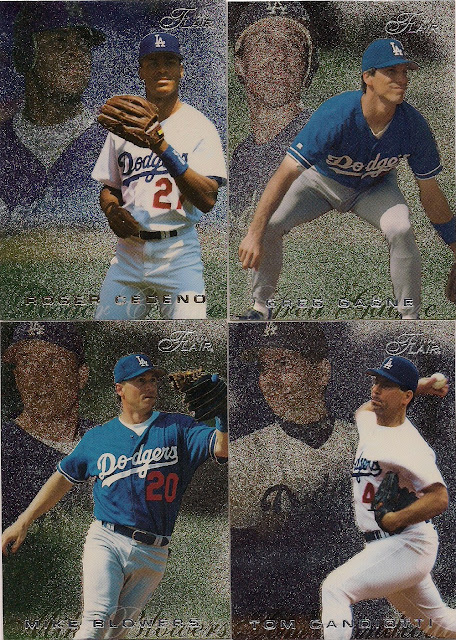 These 1996 Flair are super sparkly and I don't know if that's because they're parallels or if Flair actually came like that in '96. I was too busy trying not to kill the downstairs neighbor in 1996. 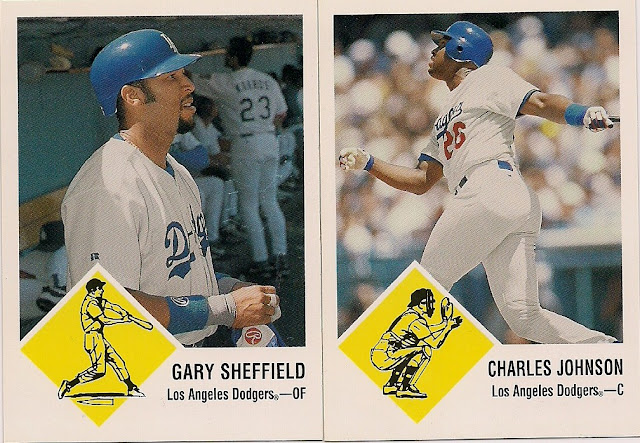 These two cards just remind me of that horrible trading away of Mike Piazza and the fact that I read about it while my two-month-old was desperately sick in the hospital.

I wonder what a whole binder of 1995 Fleer looks like?

Is it even legal to have a full binder of '95 Fleer? 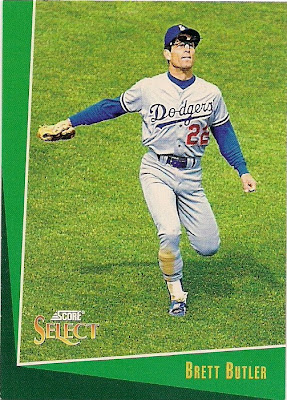 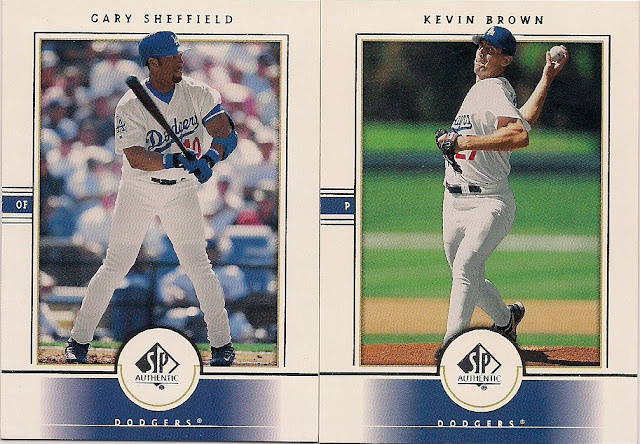 2000 SP Authentic is one of those sets that when I receive cards from it, I wonder if nobody sent me the cards how long I could go without being aware that the set even exists.

It doesn't matter that it's on my want list. I was just vacantly typing in wants when I typed in "2000 SP Authentic." It had no meaning.

I'm guessing if I lived to be 140, I'd never attempt to complete the Dodger team set for 2000 SP Authentic.

But thanks to Paul, I don't have to live that long!!! 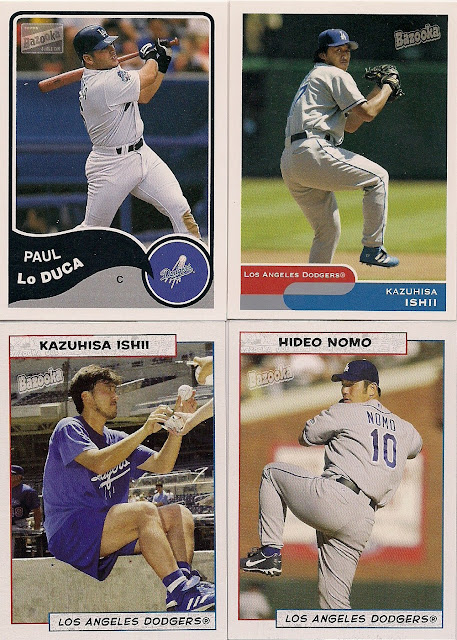 (hint: the answer was several cards ago).

The Snob sent me a number of other cards, but I think that's enough. I've forgotten a lot of the nastiness from earlier.

That gives me plenty of time to gear myself up for my next Dodger viewing experience. The Dodgers are playing the Giants on MLB Network on Tuesday!

Don't screw it up, guys.

I can buy a video game, you know.

arpsmith said…
I am sorry but I do believe the Giants are going to ruin your MLB network viewing!
May 7, 2012 at 9:40 AM

Mark Aubrey said…
Daisy? She's hawking perfume for Kohl's and has been recently seen dating Hideo Nomo.
May 7, 2012 at 12:00 PM

steelehere said…
It's about time Don Mattingly ends the Javy Guerra closer era since the league has figured him out and puts Kanley Jansen into the closers role. He's a much more effective pitcher.

While on the subject of the bullpen, the Dodgers need to call up Shawn Tolleson. He's been lights out at every level of the minors since the Dodgers drafted him.
May 7, 2012 at 12:10 PM