My solution to Topps Archives ... Minnnniiiiiiisssss!!!!!!! (of course!)

May 23, 2012
I am seeing 2012 Topps Archives posts everywhere. I suppose, as a lover of everything that features even a hint of vintage cardboard, I should weigh in on the newest card product in, oh, what's it been ... two whole weeks?

So, here it comes.

My opinion on 2012 Topps Archives.

Prepare to be thought-provoked, tickled, angered, bemused, changed in every way.

I really wanted to be interested in this product when I first heard the news that Archives was coming back. But after seeing it -- on the blogs anyway, who has time to go to a store in the middle of the week? -- I'm not that intrigued.

I've come to the conclusion that I'm just not very interested in new cards this year. I still like to buy a pack or two to see what's out there. But I'm not like I was four years ago. The chances of me attempting to complete a set of new product has declined immensely in the last couple of years.

Archives looks a little interesting. But you have to remember that I just received a big shipment of Fan Favorites cards from 2003-05. Except for the fact that Archives has new players on familiar Topps designs, Fan Favorites is pretty much the same -- but it includes more than four designs in the base set, and the cardboard isn't that pressed plastic stuff that is used in Archives.

As for new players on old designs, didn't we just see that in Heritage?

Listen, I don't hate the product like Gypsy Queen, or am dismissive like with Bowman or Opening Day. It's just that there's too much of the same-old in it for me. I just collected a similar set to Archives called Lineage last year. Granted, Archives is a big improvement on Lineage, but my excitement and energy about a mix of old and new players in one set was drained with Lineage. Sorry, that feeling is not coming back for awhile. 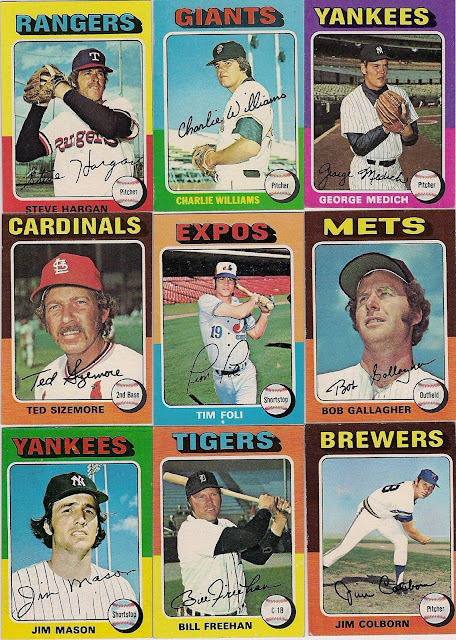 (You knew it was coming. It was right there in the title).

1975 Topps minis will never bring out a "meh" in me. I will always be thrilled with them. My heart will always skip a beat when I see them in a card package. It will always be exciting shopping for them. Because '75 minis have a real connection to what I collect and why I collect that no modern set can match.

Which is why I'm still trying to finish off the Lineage '75 minis insert set, too. I've had to take a break from that because of my Fan Favorites binge, but I'll be back on the Lineage mini wagon in a few weeks.

Meanwhile, I'm getting the real thing in card packages!!!!!

The Steve Hargan mini and the Jim Colborn mini came from Max at Starting Nine and Adam at ARPSmith's Sportscard Obsession, respectively. You'll see the rest of the cards from those two packages when I'm good and ready.

The other seven cards in that group all came from Josh at Royals and Randoms. He saw them and knew just where to send them!

I love being the resident '75 mini collector.

Speaking of which, a random package arrived the other day from Ted at Crinkly Wrappers. Out popped two colorful, undersized cards with lots of tiny people on them. 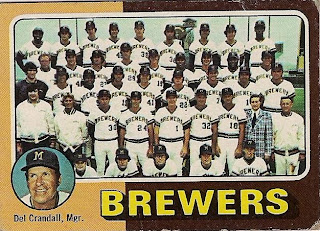 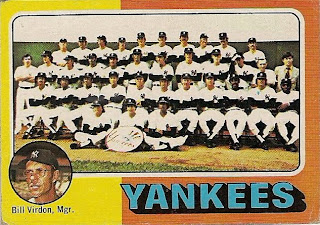 And the checklist backs aren't even checked!!!! Not necessary, but preferred.

I've said this before, but if you want to send me cards that will go right to my heart every time, check out my '75 Topps mini wants and find some minis to send me. I will desperately search for something to send you back (I've been really pokey sending out packages lately, but I'm targeting Friday for another shipment).

Quite simply, '75 Topps minis are the only cards that transport me immediately to that green, nameless corner store a few blocks' walk from my home in 1975. There I am, standing in the only aisle in the store, right in front of the counter, and there they are, glorious cello packs of '75 minis stacked on the counter. I can see it as clear as the words that I am typing right now. 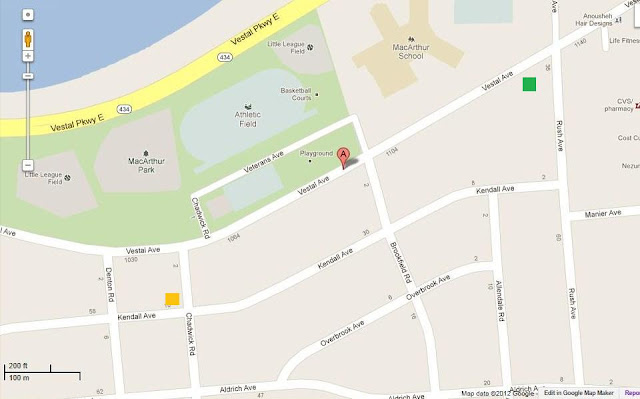 This is a map of where I grew up. The gold box is my home. The green box is the store that contained the best cards ever made.

It was just a few blocks away, but it seemed like a journey to the end of the rainbow.

Sure, I'll grab a few packs of Archives. It'll be a little interesting until A&G hits. I'm aiming to get the 1954 style Matt Kemp and Jackie Robinson, the 1971 style Ted Lilly, the 1980 style Clayton Kershaw, the 1966 style Sandy Koufax short-print (can you tell I've seen a few posts of this stuff?). But this is not set-collecting territory here.

I've already found a set close to my heart. And it doesn't reside on a shelf in Target or Walmart.

The Lost Collector said…
I played many a soccer and baseball games at MacArthur. And I certainly hope you went to Pudgies right after you got your cards.