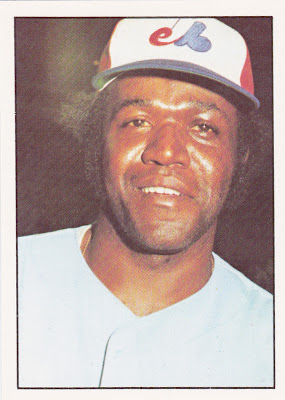 Ten reasons that you need to find this card for your collection:

1. It is an awesome night card.
2. The card has no words.
3. Nate Colbert -- I swear that's who is on the card even though there are no words -- is a Montreal Expo in the picture. Everyone remembers him as a San Diego Padre.
4. It is a super close-up picture.
5. Colbert's teammates considered him ugly.
6. They thought he was so ugly that they nicknamed him "The Iguana."
7. It is a super close-up picture of an ugly iguana.
8. Colbert played for last place teams from 1968-76. The only year he did not play for a last place team was in 1966. That team finished 8th. There were 10 teams in the league back then. The two teams he finished above were the Cubs and the Mets. So, really, he finished last every year of his career.
9. Colbert hit five home runs in a doubleheader in 1972. Look at the photo. He's practically dying to tell you about it.
10. I can't come up with a 10th reason. Just get the card. ... But not mine.