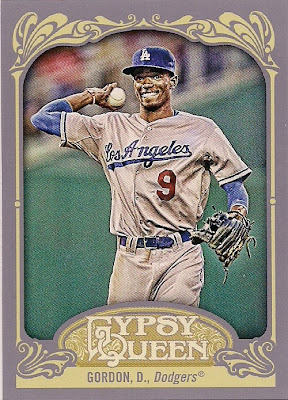 As the resident hater of Gypsy Queen, I suppose people are waiting for me to fall off the wagon and announce that I've purchased two cases of GQ because I confess I just love the stuff so much! It's so BEAUTIFUL.

Well, first, I don't hate any set. Hate is too strong a word for cards.

Except 1992 Donruss. Sorry, '92 D, I really, really, really hate you. Burn in the ground you disgusting, putrid, vile set of horror.

But everything else I measure in "like" and "dislike." Sometimes "love."

I still dislike Gypsy Queen, particularly this year's version. And, no, I haven't bought any GQ since my first experience with a pack. I'm not even tempted in the card aisle. All I have to do is look at the price tag and I say to myself "$9.49 for THAT?"

Yup, the chances of suddenly discovering random Gypsy Queen in my shopping cart is nil.

But fool team collector that I am, I'm required to obtain cards from each and every set regardless if it's one of the homeliest things put to cardboard. And that's where you come in -- sending me cards that I believe have no redeeming value.

The first person to send me this year's GQ was Topher at Crackin' Wax. He was shipping cards out free and, gee golly, I had to have the Dodgers. You see the Dee Gordon card up there. Dee hasn't lost his smile despite hitting .237. 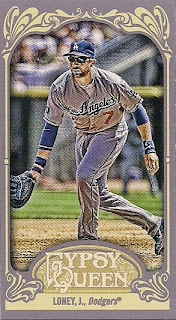 Here is my first GQ mini, of the equally light-hitting James Loney. This Loney card says "Straight Cut" on the back, which leads me to believe it's a ridiculous back parallel. I only know this because some blogger mentioned that a certain card they pulled was the "Straight Cut Variety," and after sitting puzzled for a moment, it occurred to me that Topps wants you to collect two versions of the same card just because it printed "Straight Cut" on the back.

Honestly, these back parallels are moving into the realm of parody. How does anyone take them seriously anymore? 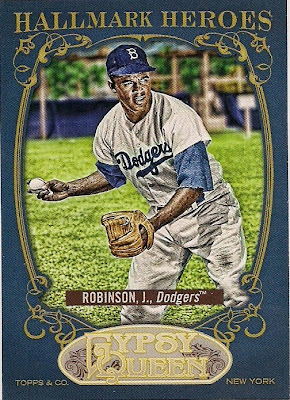 Here is the final card from Crackin' Wax. It's yet another Jackie Robinson card. From one of the insert sets in Gypsy Queen.

If this pose looks familiar to you, it's because it's appeared in dozens of sets over the last few years. In fact, one of those sets was Gypsy Queen, JUST LAST YEAR. 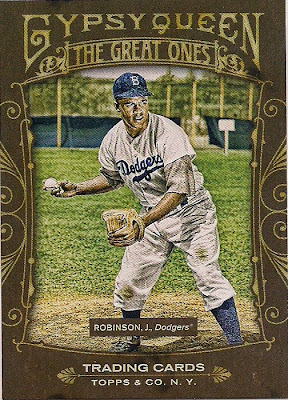 There it is. One year ago. But Topps tricked us by zooming in on Jackie for this year's set and colorizing the trees in the background. Gosh, it's like a WHOLE DIFFERENT PHOTO.

Really, Topps. I'm OK without a Robinson card in the set. In fact, you can never print another Jackie card ever and I won't hold it against you. Think about it.

The second person to ignore my whining about GQ and send me some GQ Dodgers was Ryan from Ryan's Pitch.

I'll show some of the other cards he sent some other time. I don't want to sully them by having them appear in a Gypsy Queen post. 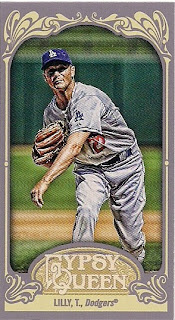 All of the cards are minis. You'll be pleased to know they all have the same backs, too. I know everyone is wondering.

By the way, Ted Lilly and Chris Capuano are the Dodgers' two most successful pitchers this year. Have both of them on your fantasy team? I thought so. 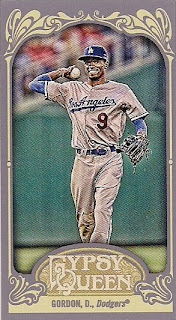 Hey, it's Dee again! So glad I didn't go on a binge of buying Dee Gordon autographs. But I'm certainly hoping he'll get things going again. 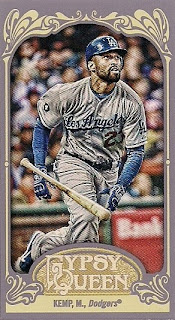 Finally, Brian at Play at the Plate sent me some GQ, too. A couple of the cards are repeats of what I showed already, but there is at least one new one. 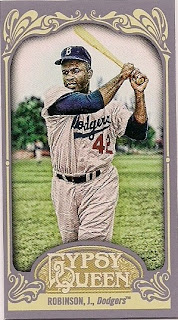 A mini Jackie. Different pose from the other card that I loved so much. But still one that we've seen many times.

This Jackie is the red gypsy back, which means ... well, it means nothing. It means I'm done collecting 2012 GQ Jackie Robinson minis.

Oh, and I'm supposed to wonder if any of these are picture variations.

GQ sure is full of itself for something so hideous.

Brian also sent another card. It's not GQ, but we could all use something colorful after all these pictures of players in their dirty, wrinkled uniforms. 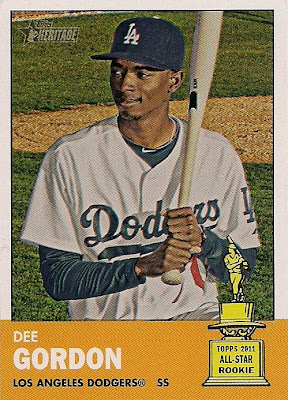 It's Dee one more time. And it's a Heritage short-print.

Doesn't that look so much better?

Unfortunately, because I'm avoiding buying the stuff, I still need more GQ Dodgers. The want list has officially been updated with 2012 offerings.

Help me out. My binder can't be filled completely with colorful, pleasantly designed sets. Help me ugly it up.

Commishbob said…
Hey, I picked up Capuano last week. He was icing on a pretty good staff for me. Now if I had a middle infielder hitting above the Mendoza line I'd be all set.
May 9, 2012 at 10:03 PM