Someone from Bowman who actually made it 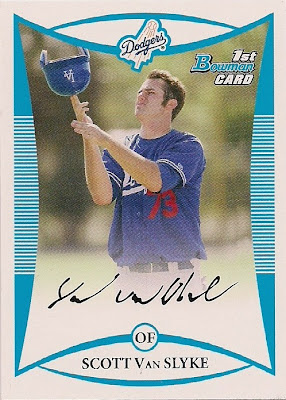 Bowman is not meant for me. I try to say that every time I mention Bowman because I'm sure there is some Bowman lover reading me bashing on his favorite product who is saying over and over "BOWMAN IS NOT FOR YOU! QUIT BITCHING!!!!"

So, just so you know, I know that Bowman is not for me.

I know this because of the Scott Van Slyke card here.

I received this card way back in one of my first blog trades almost four years ago. I believe it was from Dinged Corners. They liked to send wacky photos like this and this is a wacky one.

Van Slyke is the son of former Pirates outfielder, the wacky Andy Van Slyke, and I've said before that I'm convinced Bowman only printed a card of Scott so they could use the photo here. He wasn't considered a big prospect at the time, which is evidenced by the back of the card in which the first line of his resume says "Placed sixth on Great Lakes roster in 2007 with 89 hits."

Placed sixth. In hits. On a Low Class A team.

A proud moment for him to be sure, but not something someone who is used to collecting cards of major league players wants to read on the back of a baseball card. 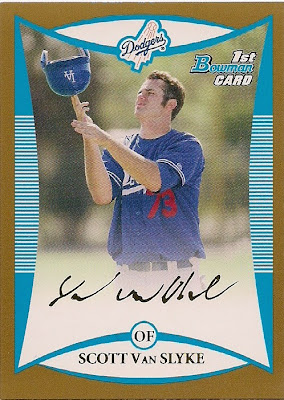 These cards of Van Slyke appeared in one of the 2008 Bowman sets, a pack of which I never bought.

That's the way it almost always goes. Unless I'm in some sort of weird, pack-buying junkie frenzy, I can avoid Bowman as if I'm looking at doilies or drapes or HGTV. It doesn't even register.

Otherwise, it's a waste of money. 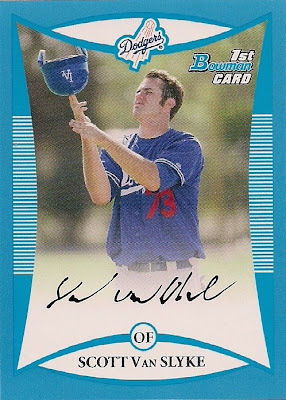 All of these Van Slyke cards came in trades, and there's Van Slyke still balancing that helmet.

He found his swing somewhere in Double A and started hitting. Last season, he was named the Minor League Position Player of the Year.

And then, yesterday, he was called up by the Dodgers after Juan Rivera went on the disabled list. In his first at-bat, he broke his bat hitting an RBI single up the middle against the Giants. It was the first time a Dodger had driven in a run in his first major league at-bat in 51 years. 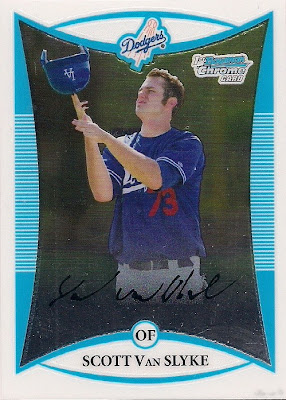 Van Slyke had made it. Someone who I never thought would make it, who was just one of those "ha, ha, look at this, I have FOUR Bowman cards of this guy and he never made it" had actually made it.

I suppose this is what Bowman collectors live for, some player who nobody knows, who is automatically discounted, who ends up actually playing in a big league game.

But for me, I can't be waiting four years for something that might happen. Out of all the Bowman Dodgers prospects from the 2008 set that I have, Van Slyke is only the second who has made it with the Dodgers. Dee Gordon (then known as Devaris Strange-Gordon) is the other.

Wesley Wright made it with the Astros. Bryan Morris is in Triple A with the Pirates. Pedro Baez is in Double A with the Dodgers. Jaime Pedroza was released last year. Brian Mathews has been out of pro ball since 2009.

It's gotten me a little curious, but not much. I don't even know if it's on a store shelf where I live yet. I have to take my daughter to Target later today, so I'll find out then.

It's possible I may even buy a pack of the stuff that I can avoid so easily.

But whatever prospects come out of that pack, I know I'm not holding on for four years hoping they make it.

I don't have time to look up projections and scouting reports and calendars of 2016. I'm a busy guy, you know.

But congrats, Scott. May there be many more hits against the Giants to come.

Oh, and it's not "bitching." It's "constructive criticism."

cynicalbuddha said…
I'm right there with you. I decided back in 2002 that I wanted to try and put the Bowman set together this is right around the time that they went to the insane numbering system they still use today. Lets just say it left a bad taste in my mouth. I actaully like this years design. But I don't plan on buying a single pack of this stuff. I just bought my Brewers team set from ebay and I'm done.
May 10, 2012 at 12:05 PM

coronado2010 said…
i just got into BDPP this season and really liked it. I like the prosppects because they're more apped to sign ttm. plus because of the chrome cards i pulled several hits. I understand though...have only heard of 4 players out of the 110...lol
May 10, 2012 at 2:14 PM

chuckneo said…
Bowman is also not for me. Definitely not 1994 and after. And maybe not even 1992 or 1993. I actually kind of like the earlier incarnations of Bowman, because they are kind of like retro sets. And if nobody has noticed - I like retro sets!

Spiegel83 said…
I found the top Van Slyke card in my Dodgers dupes/bums box. It must have been sent to me months ago. I don't open Bowman so, it must have came from a trade. I am happy that I found it now and I hope Van Slyke is on his way to a good career. He only needs to play good enough to get at-bats from Bobby Abreu, Tony Gwynn Jr. and Joames Loney. Should be easy for him.
May 10, 2012 at 2:52 PM

The Lost Collector said…
I'm a Bowman fan because I like to send TTM requests to minor leaguers (usually better at responding than big leaguers). It's always nice to have a card of a player in the big league uniform, as opposed to an airbrushed Tristar card or something.

I have never understood the numbering system or the different variations, but as a TTM collector, I look forward to Bowman.
May 10, 2012 at 4:01 PM

Kbrewster/90 said…
I COULD like Bowman if they would stop picking guys that are out of baseball before their cards are printed. Prospecting first round draft picks is one thing. Putting cards out of players who have been in the minors forever and were never drafted is another.
May 10, 2012 at 4:46 PM

Paul Hadsall said…
I don't think there are any Bowman collectors - just prospectors hoping to acquire cards of "the next big thing" before everyone else catches on.

I love going back a few years to look at the prospect cards of the other guys to see how many I remember that maybe I saw them in a short major league callup, or maybe I saw them play in the minors or indy baseball.

The Bowman cards I have no use for? The veterans... Topps doesn't put enough effort into card design for me to care about the 30th Albert Pujols, Derek Jeter or David Ortiz card of the year. :)
May 10, 2012 at 8:13 PM

Brandon said…
Good to see Scott Van Slyke make it. I saw him play several times when he was with the Great Lakes Loons which is the next town over. He never seemed to me like a prospect so its a little surprising he made it. But good for him.
May 11, 2012 at 12:09 AM

Play at the Plate said…
I bought a value pack when I couldn't find the Olympic blasters. I was not impressed, but I never am. I just don't prospect. They are great for TTMs if that's what you want, but I think there are billions of Bowman cards out there for guys who never even sniffed AAA.
May 11, 2012 at 12:51 AM

steelehere said…
The first Dodger in 51 years to drive in a run in his first at bat stat isn't correct.

night owl said…
My write-up should have read that Van Slyke was the first Dodger to drive in a run in his first at-bat AS A PINCH-HITTER in 51 years.