May 17, 2012
(OK, one more chance to enter my 2,000th post contest. I hope to be adding up the results in the next couple of days and revealing a winner. But first, it's Cardboard Appreciation time. It's the 142nd in a series): 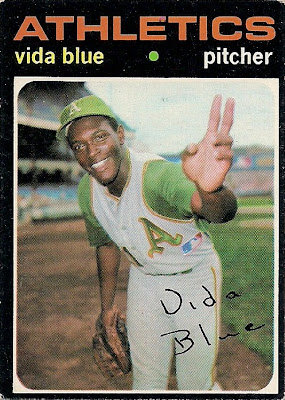 To me, this is among the most memorable cards in collecting history. It is my era's 1986 Donruss Jose Canseco  or 2001 Bowman Chrome Albert Pujols.

I wasn't collecting in 1971. I was only five. But I knew about this card from my earliest stages in the hobby. Vida Blue's smile, his combination pitching pose/peace gesture, his epic 1971 season at the age of 22, made this an epic card, even if it was one I could only admire from afar.

But since I've completed the 1971 set, I can now admire it right in my hands.

Here, let me turn it over to the back: 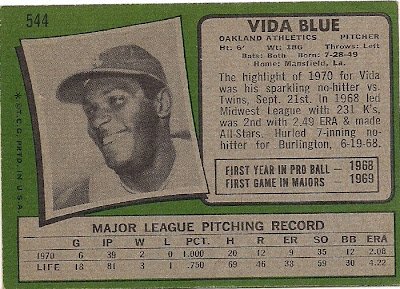 Vida's still smiling. But you can see by the stats, he hasn't achieved very much in the majors, entering his breakout '71 season (although the blurb mentions that no-hitter at the end of the 1970 season).

Fan Favorites issued Vida Blue cards in all three of its sets. 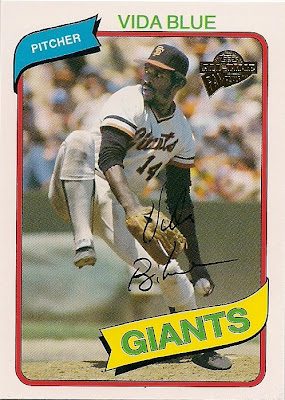 But in the 2003 and 2005 sets, Blue is an Oakland A. And in each case, Topps puts him on a 1971 design, because Topps liked to match the player up with one of his greatest seasons -- when fans would most consider the player a "favorite." 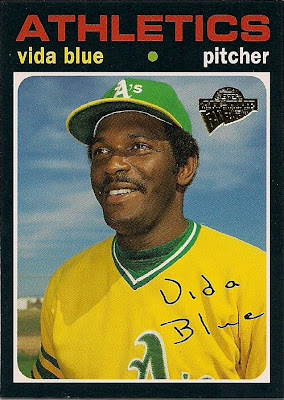 The strange thing is that in all of Blue's Topps cards, from 1971-79, I don't think he's wearing a mustache on any of thm. This picture of Blue, given his facial hair, appears to match his early San Francisco Giants days in the late '70s/early '80s. So perhaps this photo is from late 1977. 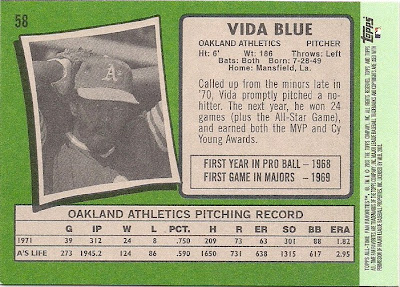 The back of the card raises more discrepancies. First, there's another photo of an "older than 22" Blue. But look at the statistics. Blue's 1971 season is listed on the back of a 1971 card. That's rather odd. But Fan Favorites did this with a lot of its cards. For example, Blue's 2004 card in which he's with the Giants, lists his Giants years on the back, up to 1986, even though it's a card with a 1980 design.

I'm not criticizing here. This is the fun of Fan Favorites. Comparing the cards, matching them up with the "real" version of the card, and noting the similarities and differences. 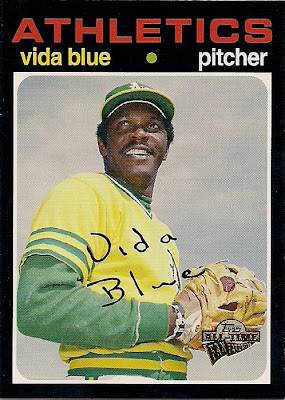 OK, Blue's an A, but he's got that mustache again, which leads me to believe it was taken right around the time of the 2003 Fan Favorites photo. Not exactly time accurate, but still fun.

Let's turn it to the back: 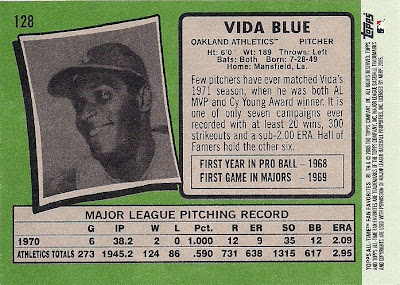 Topps is more true to the original on the back of the 2005 set. It even uses the same black-and-white photo that appeared on the 1971 card. The stats are from 1970, too, just like on the '71 set. The stats are slightly different. Topps goes with the more accurate 38.2 innings pitched rather than 39. It also omits the hits column, probably because the bold type used up too much space to add another column.

But really, there's just one favorite among the three.

It's the one that I knew about that very first year I collected cards in 1975. Vida and his smile, saying to me, "Peace. Keep on Collecting, Kid."

Commishbob said…
Vida was heavily recruited by Bill Yeoman's University of Houston football staff as a quarterback. He was a couple years ahead of me but we would have been there at the same time.
May 17, 2012 at 8:37 AM