Why CAN'T he be the next Koufax? 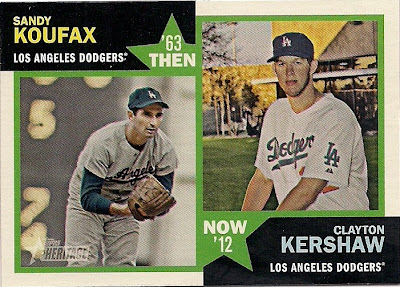 I received this card from Dennis at Pictures of Men. I've come into a lot of Blue Jays cards recently and he is going to be a beneficiary of that windfall as soon as I can find a post office.

Cards like this Koufax-Kershaw item get some collectors' blood boiling, because the card by its nature is comparing one player with another, as if (*gasp*) they are the same.

But the Koufax-Kershaw comparison has been made before.

And I've heard a load of people dismiss it instantly: "I don't think Kershaw is another Koufax (said with a "that's absurd" tone of voice.)"

But why can't Kershaw be another Koufax? His last name starts with K. He's a Dodger. He's a pitcher. He's a tremendous talent. He strikes out a lot of people. He's the ace of the staff. He's won a Cy Young.

Right. Koufax did/was all those things, too.

Truthfully, it's also difficult for me to imagine Kershaw matching all the feats of Koufax. Four no-hitters. I mean that's big mountain. Kershaw doesn't even have one yet. 382 strikeouts in a season. Kershaw's best is 134 less than that.

I think the reason a lot of us have a problem with this is we don't want to give modern players credit while we give past players too much credit.

I've learned to get past most of that with Kershaw. I've decided to enjoy him for the greatness that he is. I've never been more excited about a player on my team (although Matt Kemp is getting very close). In fact, I've gotten to the point where I'm stunned when Kershaw doesn't do well.

So, I'm trying to get all the Kershaw cards while I can, before everyone realizes, "geez, maybe this guy really IS the next Koufax."

These came from Dennis, too. It's kind of a cheap way to pick up Kershaw cards. But I'm not the one who put four unrelated players on one card. Believe me, if I produced cards, I'd never do this.

Dennis also sent me another Koufax: 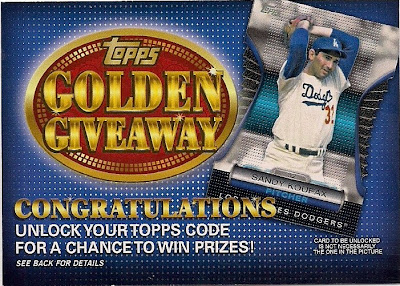 OK, it's one of those Golden Giveaway ads with a card I'll probably never get (because all get out of that stupid thing are fake coins). But good on Dennis for knowing that -- for me -- yes, this is a Dodger card, too.

I also received another item that isn't related to Kershaw or Koufax and isn't even a card.

But it's uniquely Canadian.

It's some sort of fold out that must have come out of a cereal box, as you might be able to see the "General Mills" logo under Kevin Bass' mug. You can see in the upper right corner of the Mike Scott picture that it was "printed in Canada."

I chose to display the three Dodgers. There are actually 10 players on this fold-out. Dave Parker and Bill Doran didn't make the cut for this post.

Today, you see collectors worshiping '80s players like I held '70s players up on a pedestal. There is a lot of love for Murphy and Gwynn among the thirtysomething crowd. I was in my 20s when they played, and they were good, but I never thought they were legendary.

It's just difficult to appreciate players when they're playing.

But I'm trying to snap out of that mind-set. Fortunately Kershaw (and Kemp) are making it easy.

That doesn't mean that Topps can create a card comparing Bryce Harper to Mickey Mantle.

(Who am I kidding? It's probably already made).

Nick said…
I 100% agree with you on it being difficult to appreciate players when they're playing.

I just can't imagine guys like Pedro Martinez who I grew up watching being in the Hall of Fame one day, even though he certainly is deserving of the honor. It's just hard to fathom for some reason.

Kershaw is definitely the real deal. If he has a few more monster years, then he'll easily be in Sandy Koufax territory.
May 4, 2012 at 2:41 AM

Spiegel83 said…
I could see this happening. Kershaw is a beast and I get super pumped when I have Kershaw tickets. I buy most of my tickets in the pre-season and if I get lucky it is to games when Kershaw is on the mound.

I also hold older players to a higher level for some reason. I may have only seen clips or heard stories of there greatness. Stories about Sandy Koufax going on a poor two outing stretch in 1961 never get told. We only hear about the successes of the players of the past.
May 4, 2012 at 3:48 AM

TheHitKing said…
I have always like Mr. Braun. I have a immense respect for those who achieve great things in the face of adversity. He was one of them, being at an age in which he knew across the pond his people were being targeted and killed for religious purposes. He also went to college in Cincinnati, that is probably where he picked up his greatness. Comparing Kershaw to Sandy today would be like comparing a gorgous 57 Chevy Belair to a 2005 Chevy Impala...both the same four door family sadan sold at a reasonable price by GM, but only time will tell...
May 4, 2012 at 7:24 AM

Kevin said…
That's the first time I can ever remember seeing Kevin Bass with a full beard. He spent most of his career sporting that classic Groucho mustache, although when he was with the Mets and the Orioles I believe he went clean-shaven.

As far as players from the 1980s (Jack Morris, Dale Murphy, Don Mattingly) being lionized today, I feel like some of that is a wrong-headed attempt by certain baseball writers to put them on a pedestal above the so-called "steroid era" guys. As I've mentioned on my own blog, I'm incredibly turned off by the hypocrisy and obstinance of the "performance enhancing" drug panic.
May 4, 2012 at 8:27 AM

Anthony Hughes said…
Kershaw is hell of a pitcher. The comparison to Koufax is appropriate, I think.