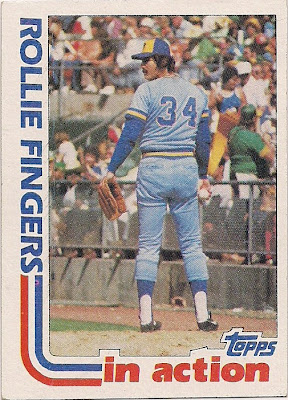 Continuing with my subjective evaluation of the major sets from each year since 1981, we have the sets of 1982. Like 1981, there was Topps, Fleer and Donruss. Like 1981, I tried to complete all three -- although not as enthusiastically as the year before. Like 1981, none of these sets rate even close to my all-time favorites.

Although '81 drastically altered the card-collecting landscape, '82 was a bit more subtle with its changes. The changes were more in terms of philosophy with the given card brand. Topps scrapped some long-standing traditions to start a few new ones. Donruss created a card back that it would use for the next decade. And Fleer, well, Fleer didn't do much new. Apparently, odd photos and errors were company policy.

So, it's time to see what was good and bad about cards in '82 -- the last year I would seriously try to collect all three brands. 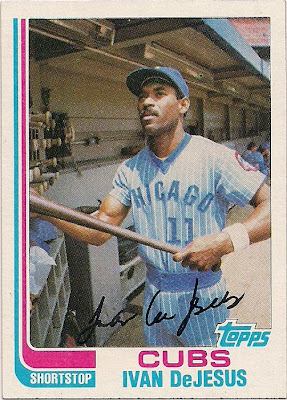 Plusses: A colorful design that appropriately reflects the time period ... The addition of some new features -- or at least new to collectors in '82 -- like separate All-Star cards, team leaders checklists, and In Action cards, which may or may not have been a 10-year homage to the '72 In Action cards. ... More dugout shots!

Minuses: Again, the color borders didn't match with the teams. The Dodgers got pink again. ... The disappearance of All-Star banners on the respective player's base card, something that had been in practice since 1975. 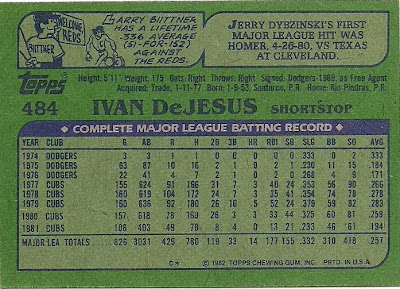 Plusses: Not a lot to say here. When the cartoon was on the back, which was hit-and-miss, it livened things up a little.

Minuses: Dark green AGAIN? Topps used dark green backs for 1974, 1976, 1977, 1979 and 1982 before finally running out of that color of paint. ... I never understood why there couldn't be two cartoons on the back instead of one and then a boring factoid in the other spot. Jerry Dybzinski's first hit? Who? ... Like '81, Topps scrapped the cartoon if there were too many stats, which made for a pretty dull back.

Minuses: Although there's nothing wrong with the design, it's never been my favorite. It should be the next '80s set I try to complete, and I just can't get into it. ... The extra All-Star cards cheapened the base cards of the respective stars. It was always a thrill to have that card feature an all-star logo. They were special, special cards. ... The addition of the All-Star cards and In Action cards (and to a lesser extent, the team-leader cards) smacked of an attempt to get multiple cards of certain players in the set, copying what Fleer and Donruss did in '81. ... The end of team photos on cards for like two decades was sad to see. ... Continued boring backs that would become epidemic in the '80s. 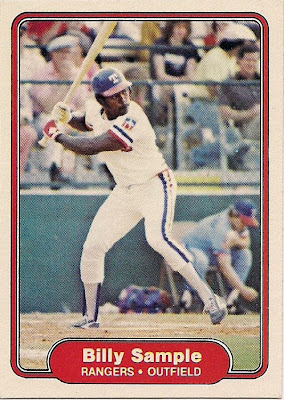 Plusses: A simple design that works. ... Design colors are coded with team's colors. ... Some of the photos are ones collectors had never seen before, in a good way. 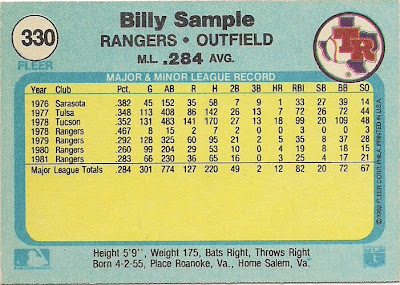 Plusses: A cool, color logo of the team in the right corner. That caught my eye right away. ... Replacing the gray of the 1981 card back with blue. It's a sickly blue, but at least it's not gray. ... Putting vital stats on the bottom. That was slightly different.

Plusses: I didn't mention this the last time, but Fleer is to be commended for putting the set in order by team ... The beginnings of SuperStar Specials, although Fleer didn't call them that then. Some wacky, random pairings, but some of them were fun. ... I really like the design. If the photos were any good, it would have worked well. In fact, I have an unnatural love for '82 Fleer. ... Cal Ripken rookie card.

Minuses: A set that would be derided the instant it hit the shelves for the slip-shod way it was produced. ... Errors, errors, errors ... Some of the cards looked like set-filler. "Steve and Carlton," I'm looking at you. 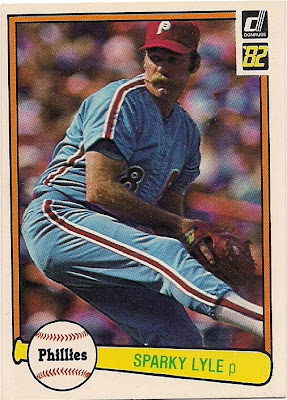 Plusses: A completely different design and look from its debut year. ... The ball and bat graphic is cliche, but it works for some people. ... Much more focus on the photo. ... More action shots.

Minuses: I found the bat-and-ball childish the moment I pulled my first '82 Donruss card out of a pack. ... Some of the pictures are dark. 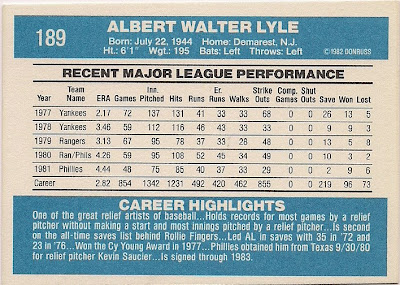 Minuses: I don't like these backs -- only 5 years of stats (an outrage for people like Carl Yastrzemski), the elimination of the timeline from the previous year -- not good. ... The card backs were always upside down when you flipped them over, compared with the traditional Topps and Fleer orientation for horizontal card backs.

Plusses: A much more professional-looking set than the previous year. ... A larger set. ... For the second year in a row, the only set with manager cards. ... The only set with coach cards, although the randomness was kind of weird. ... The first San Diego Chicken card. ... Cal Ripken rookie card.

Minuses: Nothing about this set made me want to collect it. I almost thought it was for little kids. ... The card backs would spawn year-after-year of the same back, making me totally uninterested in turning over the card.

And so it's time to declare the winner:

I promise that Topps won't come out on top ever year. Not that there is anything wrong with that.

Commishbob said…
Jeez, I can't tell you the number of '82 commons from all 3 of those sets I threw away back when I did a 'card purge' 10 years or so ago.
But that Ripken Rookie!! I had bought 800 count boxes of Oriole cards and had probably 75/100 Ripken Rookies, mostly Topps. It was at it's height when I decided to go back and finish my last semester of grad school. They pretty much paid for that semester.
March 19, 2012 at 8:16 PM

Mariner1 said…
I've really started to take a liking to the 82 Fleer set in the last month or so. Everytime I see some I continue to pick them up. I'm thinking of one day maybe trying to build the set.
March 19, 2012 at 9:18 PM

Jason said…
This post brought back a lot of memories. Jerry Dybzinski - first thought was 'Dibber', which is what longtime Tribe announcer Joe Tait always called him.
I thought Topps put out the ugliest design in their history, at least until 1990 rolled around.
Totally agree with your thoughts on Fleer. I liked the design so much I bought the whole set after only opening a couple packs, then was hugely disappointed to see so many blurry pictures.
Donruss, with the kiddie looking set, I thought did the best job, but that's not saying much. At least they managed to put a set out without using the same Rod Carew photo that Fleer and Topps (In Action) used.
March 19, 2012 at 9:48 PM

Erik said…
Love the post. I might be the only one who prefers the '82 Donruss set. For some reason I like the bat/ball base over the designs of the other sets. Some day I wouldn't mind trying to complete that set, I don't think unopened material is too expensive for that set.
March 19, 2012 at 9:53 PM

MCT said…
I began collecting baseball cards in the second half of the '70s, when Topps would put the All-Star designation on the player's base card. To me, that's just how things are supposed to be. I could never get used to the separate All-Star cards from 1982 on.
March 19, 2012 at 11:31 PM

beefman said…
I was 3 when these sets came out, so I waited until a couple of years ago before I found all 3 complete sets on Ebay for about $100 total. I preferred the Topps set too, mainly because it was more comprehensive. Though they get a minus for the multi-player Ripken. And the 'hockey-stick' design!
March 20, 2012 at 3:54 AM

Anonymous said…
Aahhh a lil' '82 Topps love. This made my day.

Anonymous said…
I've got to agree with you - 82 Topps is the best of a mediocre lot.

Fuji said…
Love that 1982 Topps set from when I was a kid... it's the bright colored stripes that do it for me.

Play at the Plate said…
1982 was my second year to collect so I remember being so excited to see new cards coming out. I bought mostly Topps because I couldn't find much else.
March 23, 2012 at 2:11 AM

Classon Ave said…
I'm fond of the '82 Topps set, and think it has aged pretty well. I'm not wild about the green either, I can live with it.