Wow, I didn't know giving away free cards would be so difficult! How is it that no one guessed that caramel creams were my favorite kind of Halloween candy when I was a kid? Am I that much of a freak? (don't answer that).

Perhaps my hint that it is a kind of candy you often find in movie theaters threw people off. But I know I've seen Goetze's caramel creams in theaters. I just saw them a few months ago. And, geez, the candy maker's been around since 1895!

What made things even more difficult in selecting a winner of 15 packs of 1993 Upper Deck was the fact that no one guessed the second part of my question either. The guesses on the first 2008 Topps Dodger that I pulled this year were: 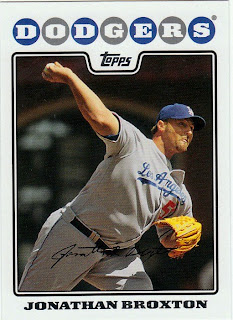 Yup, it was the big boy, Jonathan Broxton.

So, in the event that no one guessed either part of the question, I said the winner would be whoever (whomever?) came closest on the first part, guessing the right kind of candy. That involved a lengthy whittling down process.

First, I disqualified the candies that weren't around when I was a kid. Those would be:
Sour Patch Kids and Gummy Bears (I first remember seeing Gummy Bears when I was in college and hot for this girl I worked with in a department store. She loved Gummy Bears and I got myself good and aquainted with the GB).

Secondly, I disqualified candies that first made an appearance when I had just about put the whole trick-or-treating thing to bed. Those would be Starbursts and Skittles. And I eliminated candies that may have been around when I was young, but I just wasn't aware of them: Hot Tamales and Swedish Fish.
With me so far?

OK, next I eliminated the candies that I didn't like or just wasn't all that crazy about. Those would be Good n' Plenty (yuck, black liquorice), Dots (they get stuck in your teeth) and jujubees (same thing). I also eliminated the candy that was OK, but not my favorite (Mike-n-Ike, dum dums, Twizzlers and Sweetarts).

So, that leaves four kinds of candy left: Bottle Caps, Nerds, Payday and Rockets.
Rockets are the Canadian version of Smarties. They were good, but not great, so I eliminated those. Nerds I enjoyed quite a bit, but my mother hated them because they made a mess, so we didn't get to have them much. So Nerds are out, too.

I loved Bottle Caps. I still do. Whenever my wife is in a store without me and she spots them she buys a pack for me. They're fantastic, especially the root beer.

They're not the CLOSEST kind of candy when comparing it with caramel creams. The closest would be none other than Payday. They both have caramel. In fact, out of all the picks, it's the only one with caramel.

Andy, just email me your address (or leave a comment with your email address), and I'll send the cards off to you. Also, if you have any particular favorite team or player or year you collect, let me know, and I'll send a few of those cards your way, too (if I've got 'em).

Thanks for playing, all. I hope it won't be the last giveaway. Maybe someone will guess right next time ;)

Joe Martelli Jr. said…
Taken from About.com. Hans Riegel invented gummi bears (the first gummi candy) and gummi candy during the 1920s. Riegel was the owner of the German candy company Haribo. Haribo went on to manufacture the first American made gummi candy in 1982. I didn't win, but you caused me to learn a valuable historical lesson, and for that I thank you!
October 30, 2008 at 11:18 AM

I kick myself for not saying Jonathon Broxton. I almost did. OOh well.

night owl said…
CC - Smarties are the American version of Rockets? :) Actually, according to wiki, they both come from the English "fizzers"

CA - I didn't know gummy bears were around so long! 1982 for American gummi bears sounds about right. Prime chasing girls period for me was '83-'87. So that'd correspond w/girl I liked and her GB obsession.

Dinged Corners said…
We demand that the umpires review the replay. Plus, there seems to be a chocolatey element to those...whatever they are. :D
October 30, 2008 at 5:33 PM

Now my big huge pile of '93 UD doubles will never be made even huger.