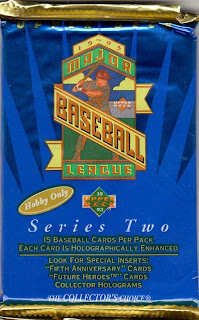 I am writing this as fast as I can because a rainstorm is blowing through, and it's already knocked out the cable and internet connection three times so far. So let's see how far I get.

I'll mention the contest at the end. (Yes, it has to do with 1993 Upper Deck, whoopee!). In the meantime, here's where I talk about what I bought my fellow blog-o-teers at the show on Sunday.

I had a hugely ambitious task. Too ambitious, frankly. I wanted to get some cards for as many card bloggers as I could. Unfortunately, there are so many generous, talented bloggers out there that I ran out of cash before I could find something for everyone. But that doesn't mean I've stopped trying. I have card stacks all over the house for certain people (my wife asked me today if we were going to have to buy a bigger house).

With the exception of one blogger, who specifically asked me to look for cards of a certain player, I'm keeping the cards I bought a secret. You'll find out when the package arrives in the mail. I hope to send some packages out next week. For others, I'll add your purchased cards to the pile, hope it blossoms into a nice, healthy specimen, then mail it when it's a fully grown adult (or at least a cranky and snippy adolescent).

But I'm revealing the cards I bought for Bailey, of the Nennth Inning, because he already knows them. I tracked down a couple of Tim Lincecum rookie cards per his request. (I also bought another Lincecum rookie I thought he needed but then realized he already had. Silly me, I misread his list. Guess I'll sell, er, keep it).

Bailey will come right out and tell you Lincecum deserves the NL Cy Young Award. I agree with him, even though everyone knows what I think about the Giants (nasty, nasty thoughts). I believe the writers are going to fall in lock step and pick Brandon Webb for the Cy, but the news has been good for Lincecum recently, so who knows? 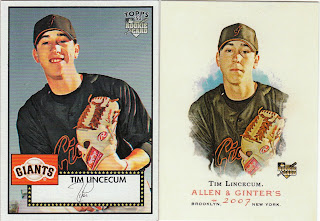 Here they are Bailey. They're headed to the post office tomorrow.

As for other bloggers, I tracked down a few goodies for David at Indians Baseball Cards. Always. His generosity should not go unpunished! The contests he runs, the huge volume of cards he sends, the money he spends. It's awesome. He also runs a great blog, and I admire anyone so devoted to the Indians, a team that was miserable for so many years until finally waking up in the 1990s. Cards are coming your way soon, David!

For the girls of Dinged Corners, I think your blog is in the top two in the pantheon of card blogs. For that reason alone, I found a few goodies that I've added to the card pile that's almost (almost, I swear!) out the door. There are smiles and mid-air acrobatics galore, a Granderson here or there, and just some plain ol' cards that I hope you enjoy.

I also found cards for some bloggers I've already traded with -- madding from Cards on Cards, Steve from White Sox Cards, Spiff from Texas Rangers Cards, and John from the the U.K. of A Pack a Day. John's already got another set of Dodgers prepared to send me, so John, I've just sweetened the Red Sox pile I already had ready. Hopefully, I'll get a chance to send cards for the others over the next few weeks.

As for some of y'all. Dayf, I think I have Braves that you're gonna want. Mario, if I ever find an Andrew Miller you don't have (I'll be shocked if I do), it's headed your way. I hope to track down other people's wants in the near future.

Now onto the contest. I promised Chris Harris at Stale Gum that I'd find some junk wax packs for him at the show. I was looking for some mid-'90s stuff and there was none to be found. I couldn't find loose packs of anything that was more than two years old. And this was an OK-sized show.

What I did find were boxes and boxes of the usual overproduced cardboard. If I collected 1990 Score, I could have bought enough boxes to pour the cards out on my living room floor and swim through them.

So, with that disheartening realization, I settled on a box of a mega-produced brand that I really like a lot, 1993 Upper Deck.

It's a hobby box of Series Two, and it cost me next to nothing. Of course, the most notable card from Series Two is the Derek Jeter rookie card. You can also find Greg Maddux, Mark McGwire, Barry Bonds and Cal Ripken. If you ask me, it's good stuff. And, hey, free cards are free cards.
So, I told Chris I'd send him a couple of packs. I'm sending him six. That leaves 30 packs left. I'm keeping 15 and the other 15 are going to whoever can answer this two-part question:

First part: when I was a kid, what was my favorite kind of candy to get when I went trick-or-treating? A couple of hints: it's a kind of candy that you see most often at Halloween (or sometimes in movie theaters), but it's not specifically associated with Halloween (for instance, it's not candy corn). The other hint: there's no chocolate in it or on it. The person who guesses correctly first wins the 15 packs, all 225 cards. It doesn't matter whether they get the second part of the question wrong. 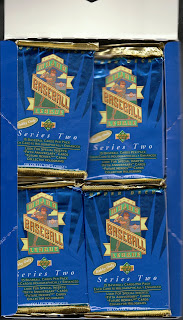 The second part of the question (which will only count if no one guesses the first part): who was the first Dodger that I pulled from my first pack of 2008 Topps (the flagship set) this year?

I haven't opened any of the '93 UD packs, and I won't until I've mailed the ones off to Chris and to the trivia question winner (although this technically doesn't fit the definition of trivia. It does fit the category of meaningless facts about night owl).
Leave your guesses in the comments below. (for example: "Snickers, Nomar Garciaparra" ... But don't guess THAT, because of the whole chocolate thing and the fact that Nomar's disappeared from Topps sets). Leave an email address if it's not already readily available on your profile. If no one gets either part of the question right, I'll go with whoever guesses closest on the first part. Happy guessing!

And if none of you like '93 UD, then I guess my wife's fears are right: we're going to have to buy a bigger house, because I'm keeping them all.

Erin said…
I can't see it not being Dots, but since that's already been guessed ... my second guess is --

--David said…
Well, since Good-n-Plenty is taken, how about Mike-n-Ike? Oh, and um, Fernando Valenzuela...LOL