The book that started it all 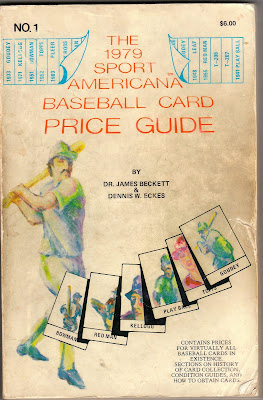 This, in a roundabout way, is my response to the results from the "Where has Topps Gone Wrong" poll I posted. It's obvious, according to those who voted (and I know for a fact Chris Harris did not vote 36 times), that Topps' gimmickry is mostly to blame for the feelings of ill will that collectors have for "The Real One." Actually, the poll categories were fairly even until news of the Sarah Palin beauty queen card broke, and then that second column pulled a Carl Lewis.

The poll's not up anymore, but here are the results written out:

I, personally, have the most problem with the first and second categories. I'm surprised that the relics/autos category didn't draw more votes, though. I know some bloggers have noted that the thrill of pulling those just isn't there anymore because there are so many autos and relics available.

Anyway, the folks at Stale Gum, Cardboard Junkie, Trader Crack's, etc., have already addressed the gimmick issue in all its various inglorious forms (Fukudome, the Jeter card, Favre on his riding mower, yada, yada), and I can't add anything more to that except a few amens and then wait for news of the next Topps shell game.

So, I'm addressing this by going back to the past, to the days of what's believed to be the very first (edit: the first modern) price guide, the book you see at the top, the 1979 Sports Americana Baseball Price Guide. It was the precursor to the current annual Beckett price guides. The '79 version was compiled by Dr. James Beckett and Dennis Eckes (by the way, you can buy the '79 guide at Fritsch Cards for $74.95. Apparently, I have the "rare white cover," although, as you can see, it's now as white as snow downtown in February).

It's fun to look at the book and see the simplicity of the hobby back then. It's also fun to look at all the check marks I wrote in the book, noting who I had and who I didn't. (Any '75 mini cards I had are denoted with a largely-scrawled "M") There are plenty of photos, unlike the current guides. And there are a few card montages, along with one devoted to non-sports cards: 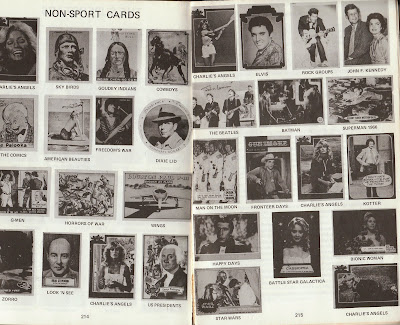 Charlie's Angels cards are featured five times on these two pages, as opposed to the other card series being featured once. Someone at Beckett had an unhealthy obsession with Farrah Fawcett, because she would pop up in strange places in future Beckett guides, too.

The best part of this guide, of course, are the prices of cards back then. It makes me wish I was an avid collector in the '70s because everything was so cheap. A few prices from back in the day, all for cards in mint condition:

At the front of the book is the introduction that Beckett has had in its price guide books in various forms over the years, although the '79 intro is refreshing in its simplicity. No mention of "short-printing" or "deceptive trimming" or similar scheming. The one category I found the most interesting is the addressing of card value. The book mentions five categories when determining value:

It goes on to mention that card condition is perhaps the most important category. And back then, it was. I remember when I was collecting as a kid, condition, who was on the card, and age of the card, were the three biggest factors. Initial scarcity was never a thought.

But initial scarcity has grown to almost overwhelm the other factors in today's market. It's also what feeds the gimmick monster. And, I think, until collectors stop caring about 1 of 1s and other scarcity issues, or at least stop making it the most important factor in their pursuit of cards, then gimmicks will always be a problem.

Still, collectors' habits don't excuse Topps. Their gimmicks, and the way they go about them, are sneaky, underhanded, deceptive, distasteful, and in many cases meant to be funny, but are not funny at all. What they do and how they do it is bad business sense, and it will hurt them, eventually.

dayf said…
Great post, I love looking through old price guides and magazines to see how the modern hobby formed back then. The actual first price guide is Jefferson Burdick's American Card Catalog, but this is definitely the first one for the modern era. My oldest one is from 1982 and it's pretty cool looking at the old ads, articles, and of course prices. It's cool you have the 'rare' cover version, it would be fun to look through it.
October 15, 2008 at 1:08 AM