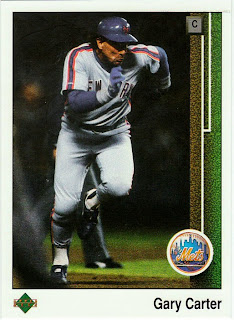 I tried to find a night card that fits a Halloween theme, but this was the best I could do. Doesn't Gary Carter look like he is in a panic, running from what appears to be a shadowy, headless, umpire figure? Humor me, it's Halloween.

This card was among a group of the first night cards that I have received in a blog trade. I got them from gcrl of the garveyceyrusselllopes blog. Both gcrl and I are Dodgers fans, but it looks like he's accumulated many more Dodgers than I have. Yikes, the box I received in the mail on Monday contained just short of 200 cards, nearly all of them Dodgers! I've yet to send him his cards, partly because I'm in the midst of wading through all these gems.

Here is a look at some of the highlights: 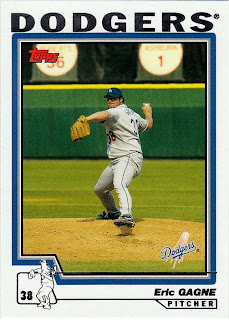 Eric Gagne, 2004 Topps. I don't know what Topps was going for in 2004 and 2005 with their photos. Gagne is a big guy but he looks like you could pick him up with two fingers. Did they take this photo from the the second deck? Did Topps decide that because Upper Deck's mantra was "we'll continue to keep you as close to the game as you can get" that they would go in the opposite direction and take you as far as you could get? 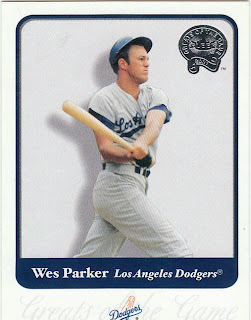 Wes Parker, 2001 Fleer Greats of the Game. It's in the bylaws of the Los Angeles Dodgers constitution that they must have a matinee idol on every team. Parker was the guy during the late 1960s-early 1970s. He appeared on several TV shows, including the Brady Bunch, playing the boyfriend of the math teacher Greg had a crush on.

I'm guessing that L.A.'s current matinee idols are Andre Ethier and Blake DeWitt. But I'm not a regular reader of Tiger Beat (is that still around?), so I could be wrong. 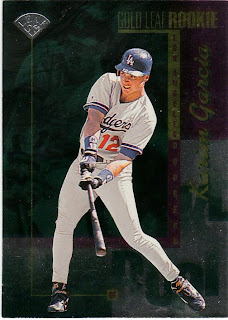 Karim Garcia, 1996 Leaf Rookie. I'm not sure what's more disturbing: 1) that I received 7 different Karim Garcia cards in this box, 2) that gcrl likely has many more Garcia cards, or 3) that card manufacturers actually produced this many cards of Garcia during a two-year span. I'm going with option No. 3. 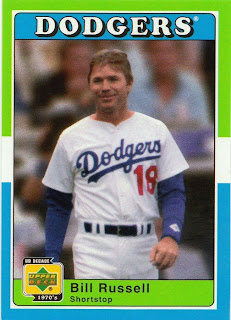 Bill Russell, 2001 Upper Deck 1970s. My collecting was nonexistent in 2001, but when I saw these at a drug store back then, I picked up a few packs and then went back for a few more. I like the old-timers. The best part of this card is the trivia question on the back: 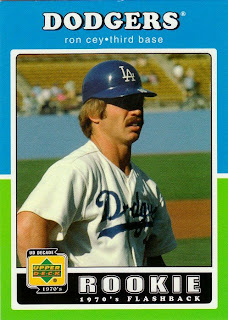 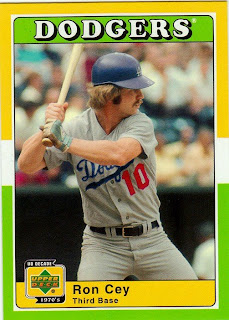 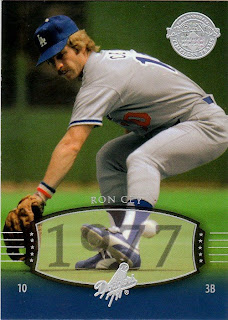 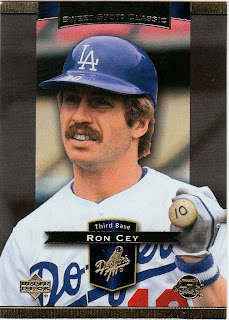 How about that? gcrl sent me four Cey cards I don't have. That alone is worth the price of admission. The last card in that series is an Upper Deck Sweet Spots Classic card. These cards have the odd habit of featuring a player with one team on the front, praising the player for his accomplishments for that same team on the back, then featuring stats for ONLY the other teams he played for (in Cey's case the Cubs and A's). Huh? 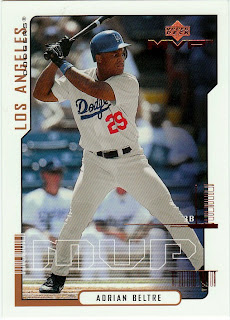 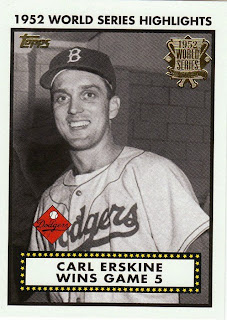 Carl Erskine, 2001 Topps World Series Highlights. Erskine is one of the original good guys. I enjoyed his book, "Tales from the Dodger Dugout," written a few years ago. It was an informative, behind-the-scenes book, but it didn't get seedy. I'm all for "Ball Four," but sometimes a different perspective is nice. 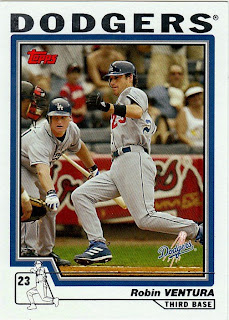 Robin Ventura, 2004 Topps. This was during a period not so long ago when the Dodgers were randomly acquiring players, throwing them on the wall and seeing if they stuck. Ventura didn't stick. 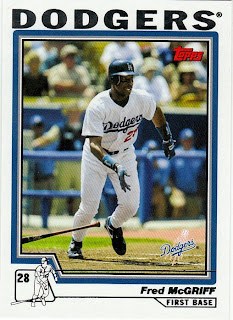 Neither did this guy, Fred McGriff. But how cool is that? McGriff in a Dodger uniform! And today's his birthday! 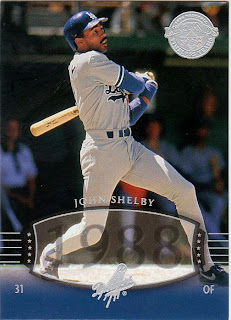 John Shelby, 2004 Upper Deck Legends Timeless Teams. Shelby isn't any legend, although he did help L.A. to a World Series championship (to this day, I don't know how it happened). These cards remind me a bit of the Topps Fan Favorites cards.

Fan Favorites had its own problems, issuing cards of certain players who were far from the favorite of this fan. Tom Niedenfuer? A Fan Favorite? Certainly not after he gave up that HR to Jack Clark in the 1985 NLCS. He was my favorite to have catapulted out of the stadium with a rocket launcher, if THAT is what Topps meant. (Someday I'll write on here how I absolutely knew even before Lasorda put Niedenfuer in the game that he would give up a devastating HR to Clark. Lord knows plenty of people have heard me talk about this, I might as well share it with the other 156 in the world that haven't). 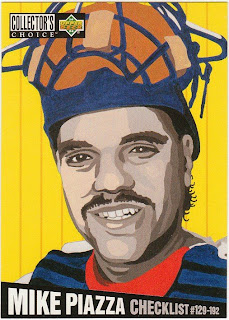 Ahhh! Here's my Halloween card! Didn't that make you jump? These '94 Collector's Choice checklist cards are so freaky. 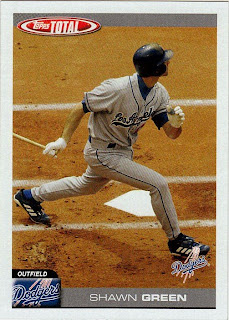 Shawn Green, 2004 Topps Total. Nice card. I think Green could get to first base in just four strides if he wanted to. 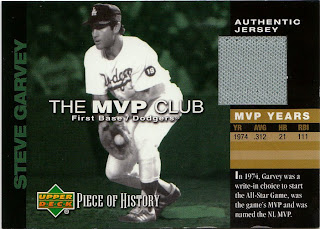 Cards are coming, gcrl! Meanwhile, read his blog, especially if you're a Dodger fan. And arrange a trade with him. You won't regret it.
Meanwhile, this is probably the last post for the day. I'm off trick-or-treating with my daughter. She's going to be a pirate. And, you, according to my recent poll, are dressing either as Evan or Eva Longoria. Happy Halloween, all.

Anonymous said…
I've often wondered about Topps using the incredibly small and distant action shots on their cards as well. Surely they must have better options. They look like the custom cards I end up making for the guys who don't get much playing time, and you can only find one shot of them.
October 31, 2008 at 4:21 PM

Anonymous said…
The thing I like best about that Ventura card is Jeromy Burnitz directing traffic in the background. "HIT THE DECK!"

My only memories of Ventura were that he was the yearly "get Adrian Beltre motivated" acquisition (Tyler Houston?!?) and that he hit his final career grand slam in what was also Hideo Nomo's final career victory, back in 2004. They beat a young Diamondbacks team (with Brandon Webb pitching) in a bad way!
November 1, 2008 at 2:23 PM