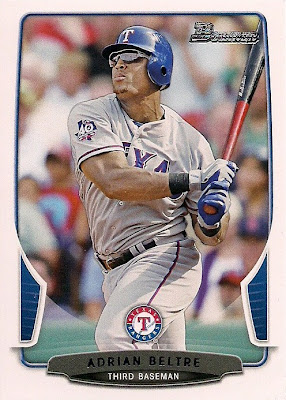 A bit of a cash crunch delayed some packages that I had planned to send out at the end of last week. But everything appears to be in order now, so I should be back to my old stop-and-start, wildly slow trading pace in the next 24 hours.

Meanwhile, I thought I'd make one last stab at 2013 Bowman before I wave goodbye to it forever. Unless some crazy hit from this set crosses my way, or I land the Ryu or Puig cards, I don't expect to feature any more cards from this set here, mostly because I don't plan on buying any more.

So let's see if we can come up with a Define the Design name for 2013 Bowman as a farewell gift.

The design is a lot like last year's with a little more going on -- it's got that technogadget vibe that Bowman has churned out the last couple of years.

The outline of the design looks like one of those wine glasses with a thick stem. Or even better, a goblet. In fact, I like "the goblet set."

But then there are those blue tab-like items on the sides that puts me in mind of a hand-held game, in which pressing in the tabs causes some sort of action. So if there is some sort of old-style game that resembles this, I'd love to pay tribute to that with a Define the Design name.

If you have any ideas, just let me know.

And, yes, I realize the prospects in this set have a different design, but I'm not going to acknowledge that because as usual with Bowman, it just confuses the issue.

While I'm talking about Bowman, I thought I'd show some Dodger Bowman cards I received from Uncle Doc's Card Closet.

Doc went through and found cards of my wants for virtually every Bowman year between 1993-2008. This is much appreciated because I think I pursue Bowman sets less vigorously than any other set brand. I don't find it appealing, therefore I ignore it.

Doc must know this because here is what he sent: 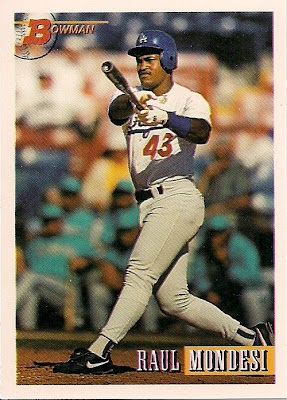 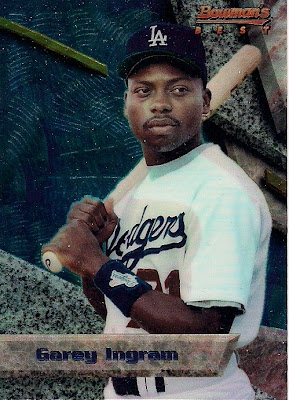 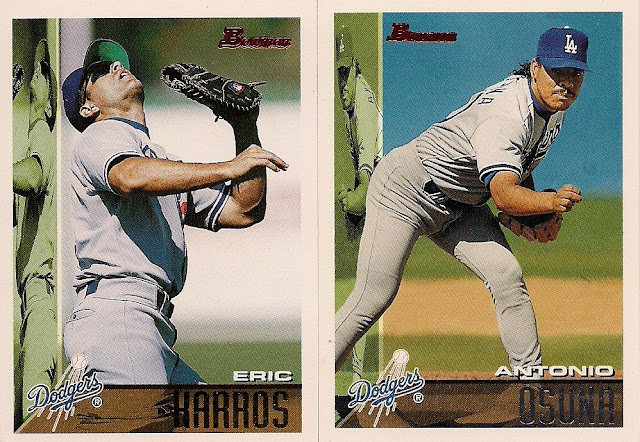 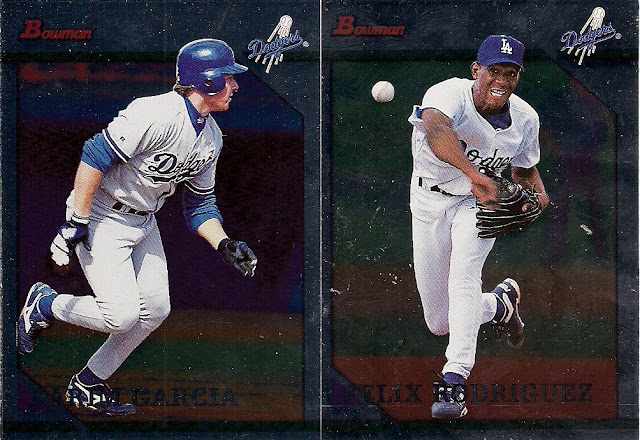 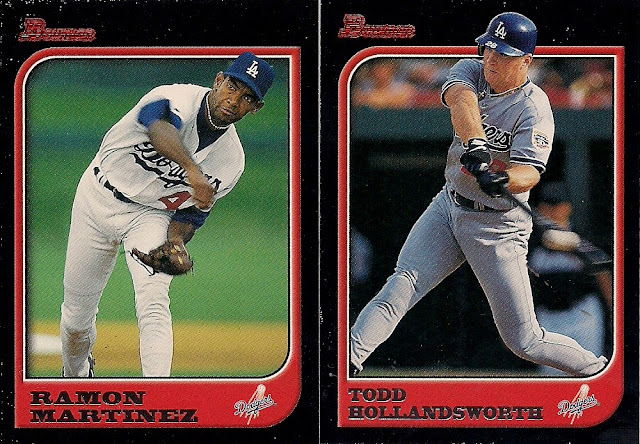 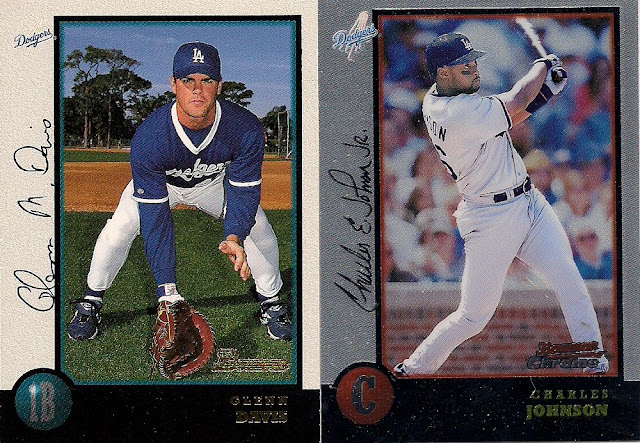 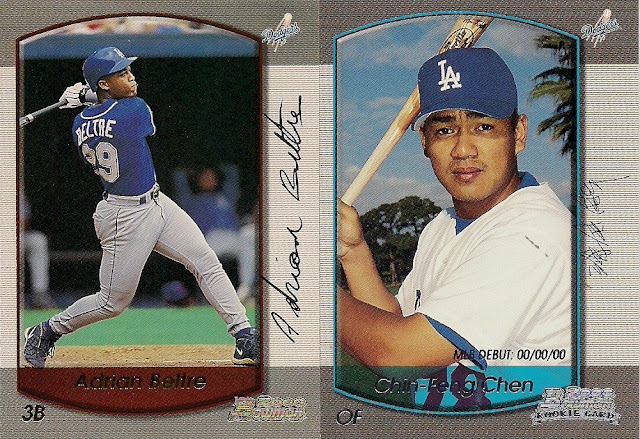 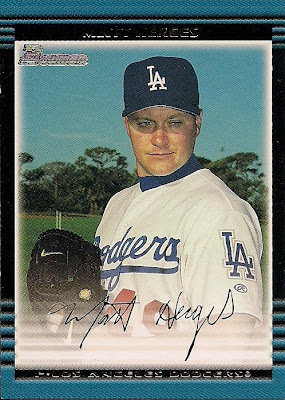 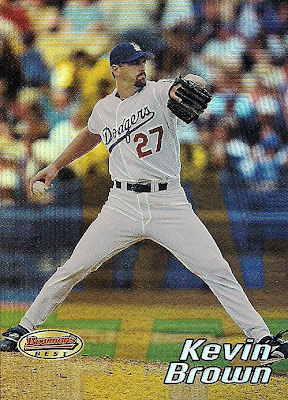 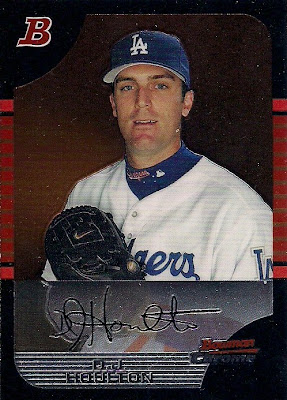 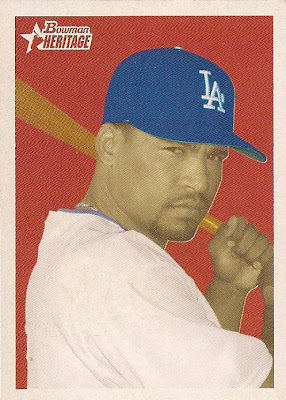 2006: Would've loved to see what Furcal could've done with a complete career. 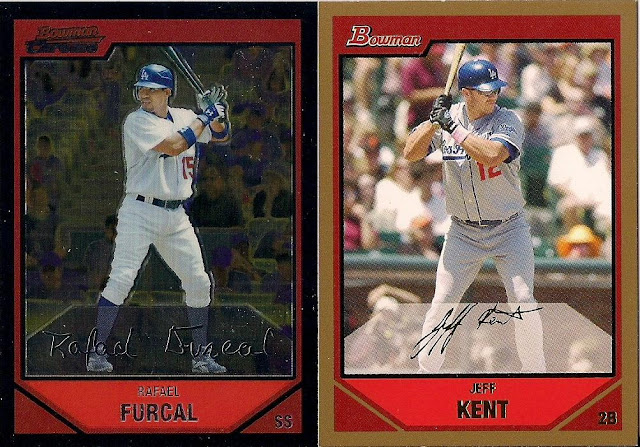 2008: Loney is doing in Tampa what I feared he would when he left L.A. 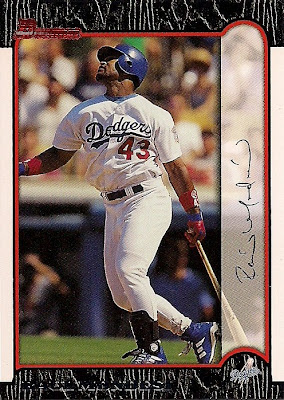 Doc also sent me this pre-production Bowman card of Raul Mondesi, which of course I didn't know existed. 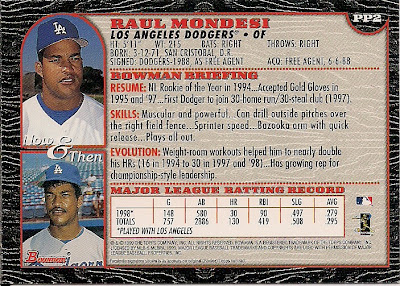 That's the back of it. Very cool. And very cool of Doc to leave an identifying note, because who has time to track stuff like this?

Doc also sent me a handful of Bazooka Dodgers, this one being my favorite: 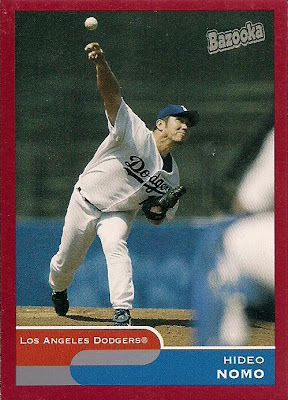 I'm not sure where Nomo is looking, but it's not at home plate.

For me, it's about as memorable as the set was this year.

Doc said…
My pleasure to send those cards your way! One of the best parts of this hobby is getting cards to those you know will appreciate them more than yourself.

The Junior Junkie said…
I think it looks more like a snifter. As in a brandy snifter with a short base.

It also looks like a loch in the Panama Canal viewed edge-on.