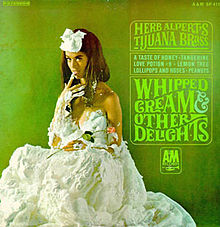 The set Topps put out that year was pretty good. The pennant flags on those cards is one of those "I wished I thought of that" designs. But also consider that the Dodgers won the World Series in '65. And Sandy Koufax pitched a perfect game.

Oh, and I was born that year. "(I Can't Get No) Satisfaction" was the No. 1 song the day I touched down. It's terribly appropriate.

The year 1965 was also when Herb Alpert and his Tijuana Brass released "Whipped Cream and Other Delights," a now-iconic, all-instrumental album as popular for its sleeve jacket as its memorable music.

This LP is part of my childhood. My father listened to lots of instrumental music. Classical and marching band, mostly. Except for the children's records that my parents would play for my amusement (who remembers "Teddy Bear Picnic"?), the living room soundtrack 11 months out of the year was Beethoven, John Philip Sousa and Herb Alpert.

When I grew old enough to lose interest in Sesame Street's "C is for Cookie," I would slide the wooden door open on my parents' record cabinet and pull out the records, making sure to keep them in order, and stare at them. I stared at Whipped Cream & Other Delights longer than the others.

There were no Playboys in the house. No National Geographics either. The model on the cover, Delores Erickson, was it. And, wow, was she IT.

Later, when I was old enough to afford my own albums and form my own musical tastes, WC&OD was the only album from my dad's collection that I would play. To this day, some of Alpert's music on that album is on my ipod. Mid-to-late 1960s music takes me back to my earliest memories and the album keeps its impact inside and out.

I had fun trying to find cards to match the song titles on this album. As you might know, virtually all of the songs refer to food, which didn't make it easy to make a connection. Other albums' song titles address concepts or at least have words in the songs to help make a connection. These songs have no words and the food title is all you've got.

So, let's play "Match the Song Title" I think everyone knows how it goes by now. 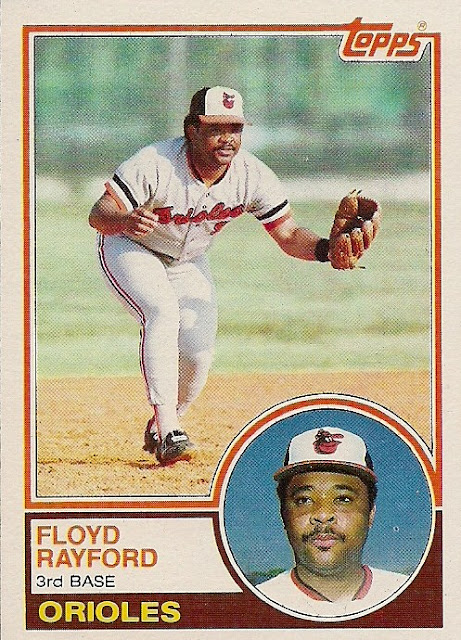 Track 1: Taste Of Honey.  The "Honey Bear," Floyd Rayford, came to mind instantly. This is Rayford's first card. In other words, our first taste of honey (bear).

This is also the most memorable song on the record for me. 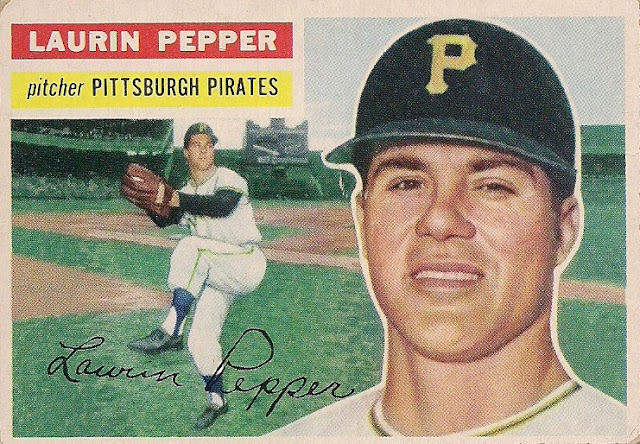 Track 2: Green Peppers. Julius Peppers never played in the majors, nor do I have a football card of him. So let's lop off the "s" and give Laurin Pepper his due. Pepper WAS heavily recruited by the Steelers, so there's your football angle. 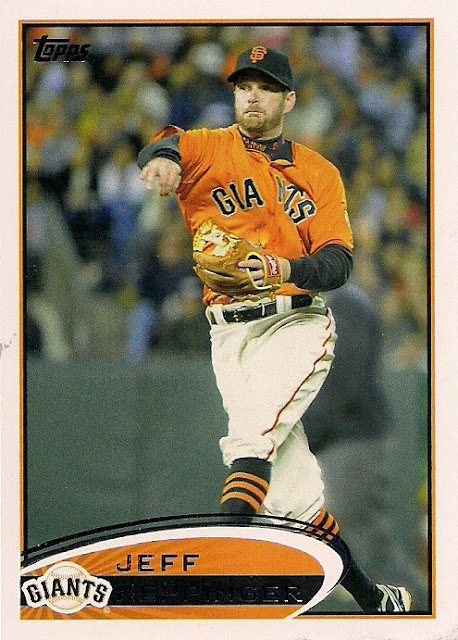 Track 3: Tangerine. I don't know about you, but when I dreamed of being a major leaguer, getting to look like a giant tangerine was not one of the goals. Congratulations, Giants on your weird fashion choice. 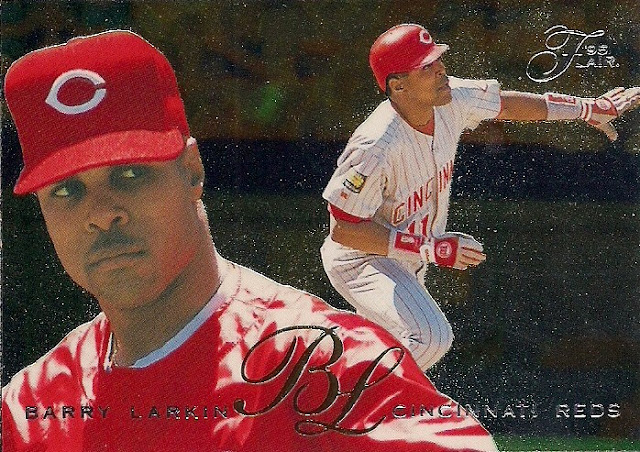 Track 4: Bittersweet Samba. A little thinking involved with this one. Samba is a dance from Brazil. Guess who was the manager for the Brazilian team in the World Baseball Classic?  Barry Larkin is not Brazilian, but apparently that's not a requirement. 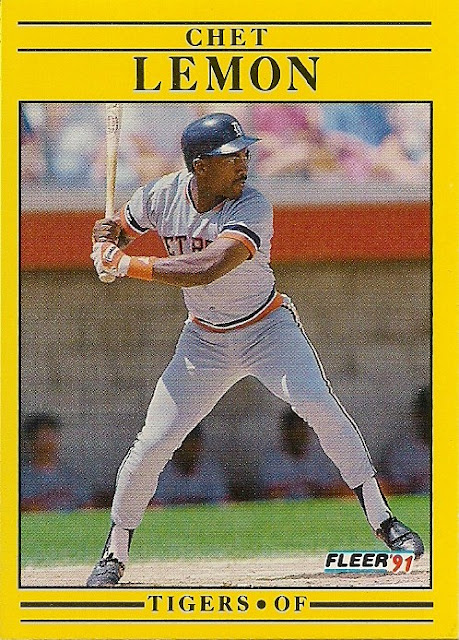 Track 5: Lemon Tree. Former Senators and Twins player Jim Lemon was 6-foot-4, which would fulfill both the "lemon" and the "tree" requirement. But I couldn't resist 6-foot Chet Lemon on a lemon-colored card.

Track 6: Whipped Cream. Sorry about the lousy image. I thankfully do not own any "pie in the face" cards, although it's quite useful for this exercise. So I held my nose and selected this one. Thank goodness Ms. Erickson wasn't wearing whipped cream on her face. 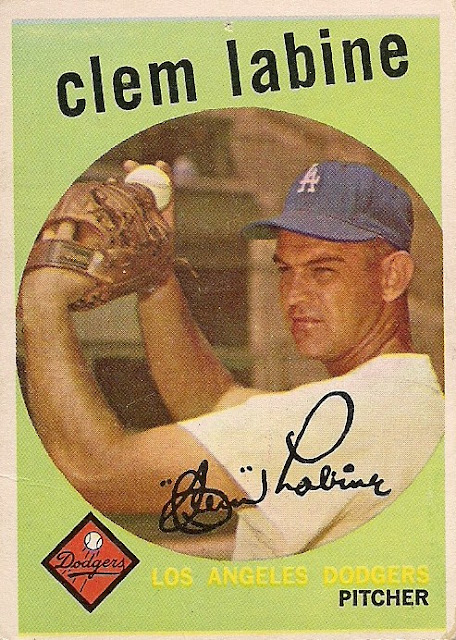 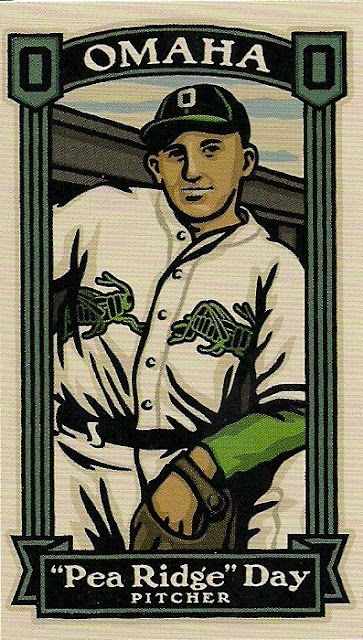 Track 8: El Garbanzo. A garbanzo bean is also known as a "chick pea." That gives me the opportunity to show this wonderful Infinite Card Set item of "Pea Ridge" Day. That grasshopper uniform is fantastic. The way Day's life ended, however, is not. Something about cutting his own throat. 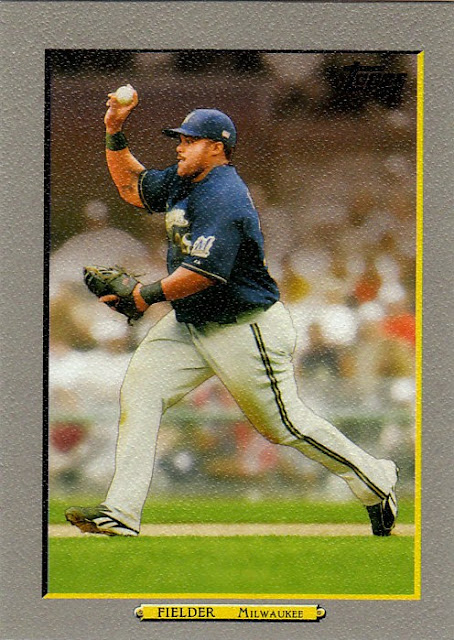 Track 10: Butterball. A Turkey Red card of one of the roundest men in the majors. In other words, a butterball on a Butterball Red card, if you want to be mean about it. 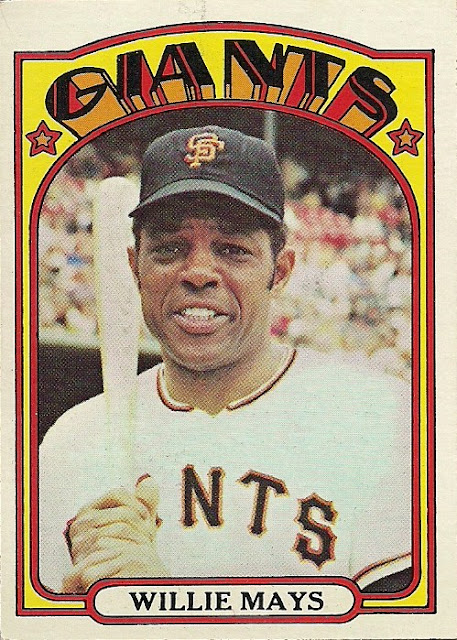 Track 11: Peanuts. I could've gone with former major leaguer Peanuts Lowery. But I don't have a card of his. I could have used some sort of peanut tie-in since it's a well-known ballpark food. Instead, I went with the Peanuts cartoon strip. If you followed it feverishly as I did as a kid, you might remember when Charlie Brown was in a spelling bee. He's asked to spell the word "maze." He confidently spells it "M-A-Y-S." And then ... 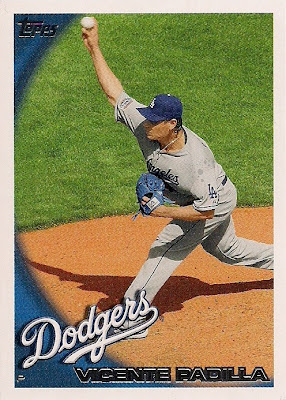 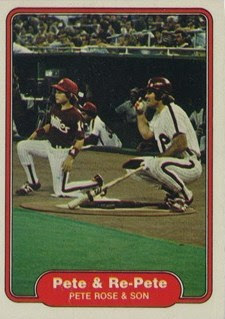 Track 12: Lollipops & Roses. One of two songs on this LP used on the old "Dating Game" game show, the Padilla card is for the "lollipops" -- a reference to Padilla's increasingly ineffective lollipop pitch -- and the Pete & Re-Pete card is for the "roses."


And that's where the needle comes off the record.

If you've been following this series since January, you probably noticed I've gone farther back in time with each album. I'm going to try to do that regularly. I'll return to the present (or recent present) for the next "Match the Song Title" because I can't go any earlier than the '60s without the albums losing their meaning to me. And then I'll precede backward from there.

I love it so much that I picked up the remix/tribute version that came out a few years ago. 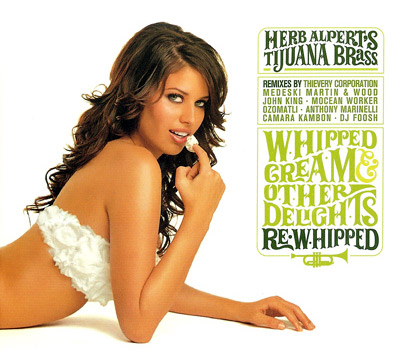 The Prowling Cat said…
The wife says she loved your record choice. As I was going through telling her the songs she knew all about them, and kept saying great song.
May 7, 2013 at 8:51 PM

JediJeff said…
I used to listen to this album when I was younger. My mom had it and man, was it a great listen. The moment I saw the album image in the blogroll I thought "Herb Alpert?? NO WAY!"
May 7, 2013 at 9:18 PM

night owl said…
If you have the original, I wouldn't recommend getting the remix. The remix is fun, but kind of repetitive. I bought it back when I didn't have access to the original.
May 8, 2013 at 2:11 AM

Fuji said…
Here's the deal. Publish a flippin' magazine already... and I'll be your first subscriber. Great post. I'm definitely motivated to check out their music... or at least look for one of their albums at the flea market this weekend.
May 8, 2013 at 10:15 AM

Mark Aubrey said…
"Miss Longshoreman" in Seattle for Seafair? I'd vote for that.

I'm sure that you bought the remix for the songs.

ClassicMNTwins said…
Your childhood, family listening choices included, were my experience as well. I'm a '62 kid.
The samexcept that we had a strong infusion of the Beatles, tons of pop music. Herb Alpert and the Brass were definitely a background sound at 317 Lincoln Avenune, but for some reason we never had "Whipped Cream." 'Tis a pity. As a postscript, that one good lookin' Latino actress (name escapes) reprised that cover for somebody' band, or some product.
September 17, 2013 at 3:38 PM