May 05, 2013
I received an email a couple of weeks ago from Tom at The Angels In Order asking me if I had the need for some oversized items.

Normally, I shy away from stuff like that, because storing it is next to impossible and I have enough spills to clean up as it is.

But I couldn't resist the opportunity to land a giant Orel Hershiser head: 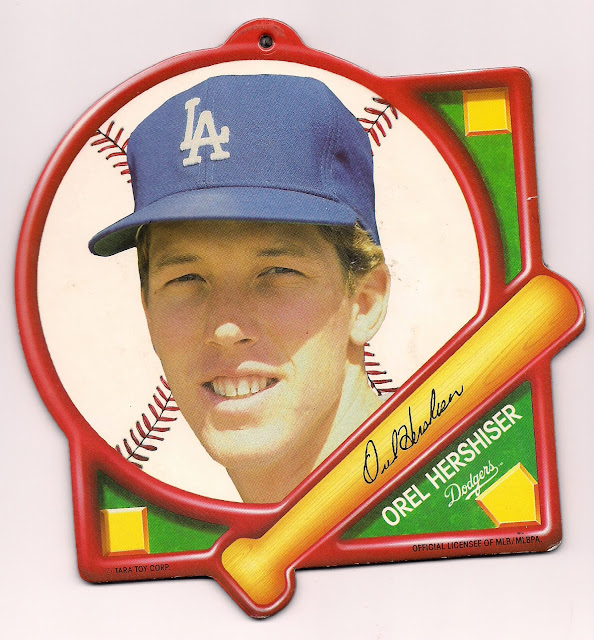 I had no idea what this was when I received the email and even less of an idea when it arrived. Fortunately, Tom left a note that said it was a 1989 Tara Toy "Play Ball."

I did some brief hunting and realized it was a simple plaque. You could hang it on the wall. I suppose it'd fit perfectly with the decor in a young boy's room (you'll have to forgive me for my puzzlement over a late 1980s toy. I was in college in the late '80s and I believe that if there is one point in your life when you have zero knowledge of little kids' toys it is the college years).

So there you are. It's something I can hang on my wall, if ... you know ... I could hang something like this on the walls of my home.

I received another oversized item from Tom: 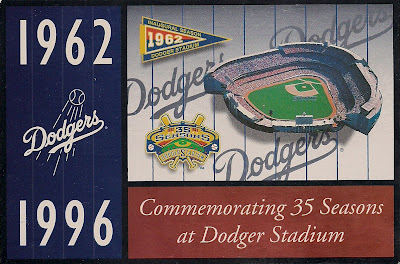 It's a postcard-sized item that maybe was a stadium giveaway in the mid-1990s? I'm too lazy to do any research on it.

But apparently I'm not the only one. This note was added to the package: 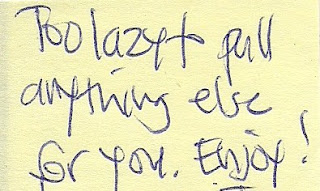 What a relief. The last thing I want to do now is scan cards.

SpastikMooss said…
To me it looks like a Christmas ornament (the Hershisher). Put a hook through the hole and you're good to go.
May 5, 2013 at 4:12 PM

The Angels In Order said…
Haha. I bought that postcard at a Dodger Stadium souvenir kiosk in 1997. I made the hour drive up for a Dodgers Hot Wheels giveaway. Good times.
May 5, 2013 at 4:18 PM

Jason T. Carter said…
I have the Eric Davis...bought it at a card show a few years ago for $1. It also comes with a stand, and looks very nice on top of a small bookshelf.