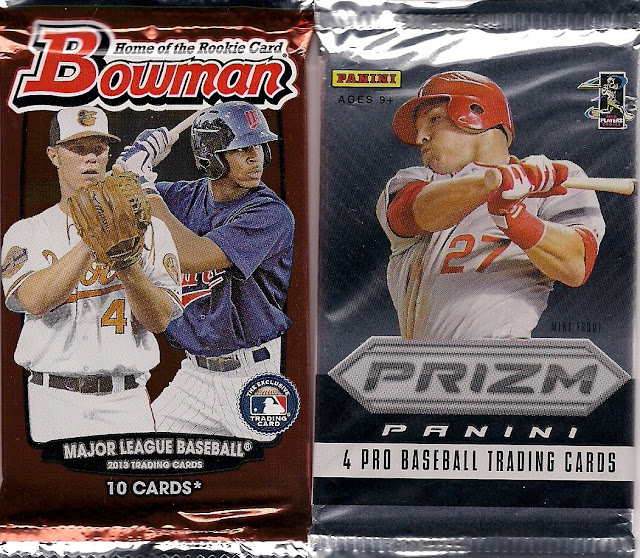 Spring is typically a dull period in the yearly card cycle. When the buds are on the trees, Topps flagship and Heritage are rotting on the shelves. Allen & Ginter's summer splash is a long way off.

I always thought this interesting because spring should be reserved for the very best of what the hobby has to offer. Instead, we get Opening Day and Gypsy Queen. I suppose Archives is around the corner soon, too, but that's not a skirt-blower either.

Right now, the new stuff on the shelves where I live is Bowman and Panini's Prizm. Today I bought one pack of each, even though I have no interest in either.

But what the hell, let's open a couple of packs of boredom, shall we?

I'll start with the Prizm first.

I can't show any cards though without first mentioning the name. I never liked the advertising gimmick of purposely misspelling a word to grab attention. I suppose it's delightfully old school to someone, but my fingers practically go into spasms reaching for the "z" key when I write out the word.

But I suppose Topps is a violator in this area, too, so I'll just have to get used to this.

What I can't get used to is four-card packs. Four cards for a licensed pack is outrageous but four logo-less cards to a pack? For three bucks? That's 75 cents for guys who look like they're playing for a city slo-pitch league that sprung for some really fancy batting gloves. Try to convince me the guys below aren't sponsored by the local sewage waste removal business. 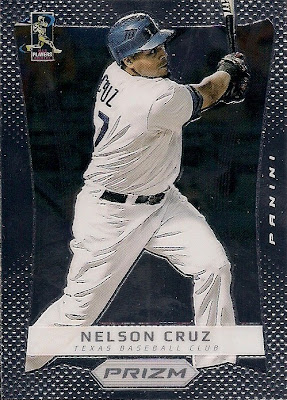 The cards are straight from some chromed-up product from the late 1990s, both in terms of look and feel. The card quality is pretty impressive, but I can't say I like anything else about it. The silver look was over about 12 years ago. 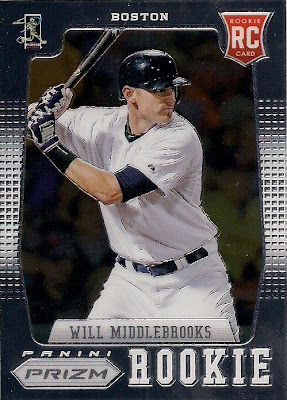 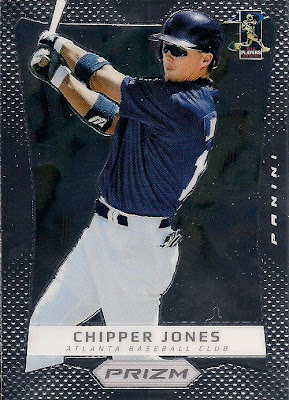 A card of the retired Mr. Jones. I suppose that's nice. It even refers to his retirement on the back. 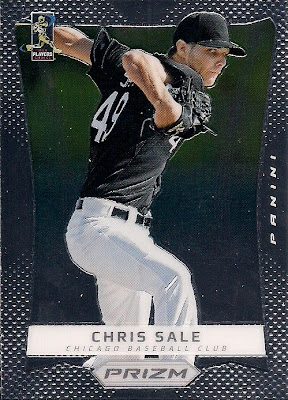 I figured out something nice to say about these cards. They smell exactly like the record albums I bought during the early '80s when I was first buying albums.

Stop looking at me that way. It's not the first time I've smelled my cards. Or mentioned that I liked ELO.

All right, let's move on to some Bowman.

As you know, there is almost nothing that interests me about Bowman. No one has been able to convince me it's a worthwhile product, and after years of doing this, I don't think anyone will.

My interest in it is even less than it's been in years past. The only thing I want out of it this year is the Hyun-Jin Ryu card and the Yasiel Puig insert. (Feel free to send me any Dodgers, of course).

So this pack is likely the only Bowman item I will buy. 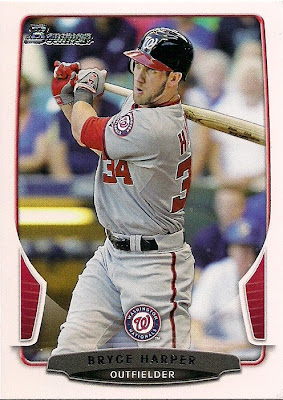 I swear this was the first card. Harper must be old news to Bowman folks. You're a has-been, Bryce! Hang 'em up! What are you now, 20? Out of my way, grandpa! 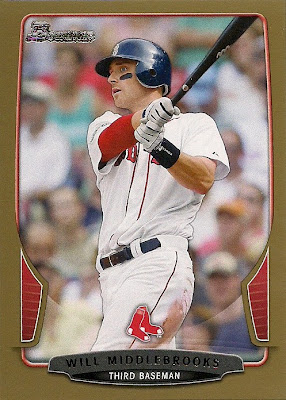 Well now, if I was a Middlebrooks collector, I'd have no issues with these two packs, would I? 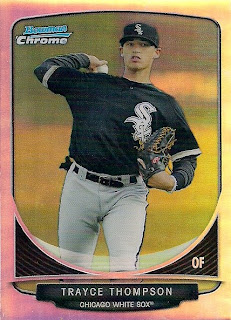 Here, I'll prove it to you by posing Trayce next to the card that followed in the pack, someone else I never knew about until I pulled his card. 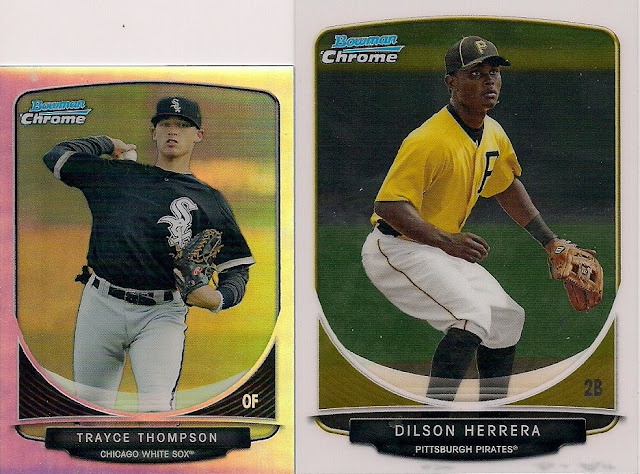 Minis have not only jumped the shark, they have hurtled over every known sea creature all the way into space and imminent oblivion. I no longer want to collect any mini not made in 1975 or with an Allen & Ginter reference on the front. All other minis are now HEREBY EVIL.

See what you did, Topps? 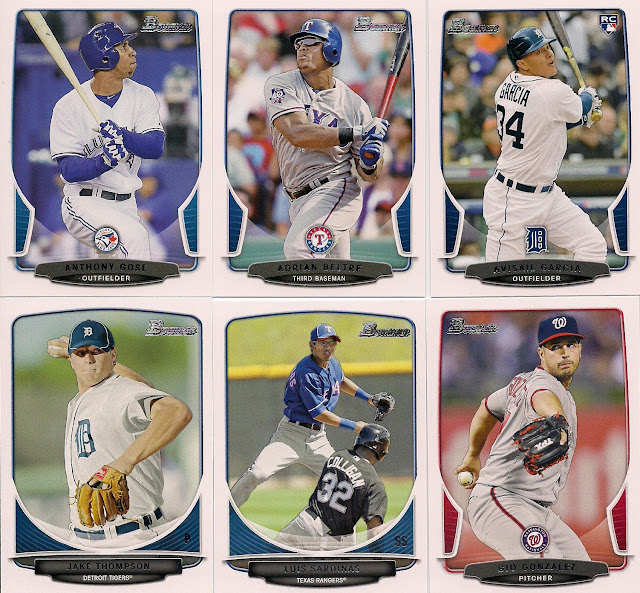 And there are the guys I didn't show before because I was so bored by the whole thing.

The last month or so I've been having a good time shopping for vintage cards and making trades for want list needs. I stop by the card aisle a little less frequently and buy a lot less frequently.

I expect this to continue through most of the year, even with Allen & Ginter.

So you know borefests like Prizm, Bowman and Archives don't stand a chance.

dayf said…
Oh jeez I did THE EXACT SAME THING today. Even got a stupid mini. There goes my blog post all down the drain.

Unknown said…
If you're not too in to the Thompson I'd trade for it. Seeing as it is Klay Thompson (of the Warriors younger brother) and I got to meet him this Spring Training. I'll see what I can offer you.
May 11, 2013 at 3:07 AM

jackplumstead said…
I just love the expression skirt-blowing in reference to cards.
May 11, 2013 at 1:59 PM

JediJeff said…
A) Prizm sucks
B) Bowman sucks
C) ELO rules
D) all that being said, you can send me that lame Sale Prizm if you want. And that Sardinas DP card.

Jamie Meyers said…
ELO was, is, and always will be awesome. Putting 4 cards in a pack and charging more than about 75 cents for it is just plain wrong, especially when the cards are as lame as Prizm. I only really care about cards of players I might be able to get signed in the minors so I wind up buying a lot of Bowman Prospects and Draft Prospects. Singles for me are better bang for the buck since I'm not after the gimmicky stuff that many people like.
May 11, 2013 at 3:19 PM