May 12, 2013
(Happy Mom's Day. If your situation is anything like mine, there are moms everywhere today and not much time for anyone else -- as it should be. Let's see if I can squeeze in a small Cardboard Appreciation. This is the 183rd in a series): 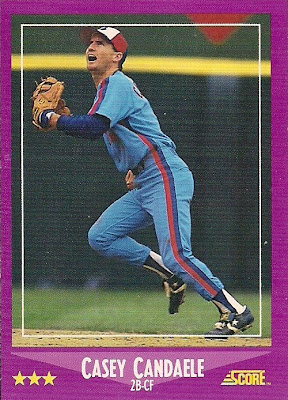 I sometimes wonder what it would be like to grow up in a sports dominated family. I don't mean just being interested in sports and watching sports and sometimes playing sports.

I mean growing up in a family where sports was part of your family's occupation. Growing up where the zeal for and necessity of sports was so ingrained by the time that you entered the world that it was all anyone ever discussed. It was basically your family's life source.

I wonder if it was that way for Casey Candaele.

Candaele, a sometimes full-time infielder/outfielder for the Expos, Astros and Indians, is known in part for having a mother that played professional baseball, too. 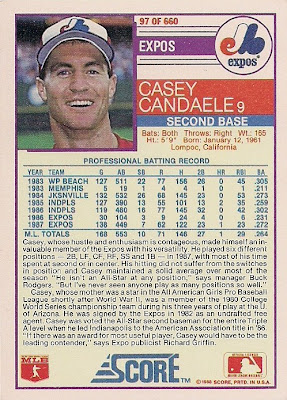 It's mentioned right on the back of his 1988 Score card.

Candaele's mother was Helen Callaghan, a tremendous hitter for the Fort Wayne Daisies during the 1940s. Her prowess and love for baseball was so much a part of the family that Candaele's brother, Kelly, made a PBS documentary on the All American Girls Professional Baseball League that caught the attention of director Penny Marshall, who would create the movie "A League Of Their Own."

A mother who made sports history and whose legacy continued more than 40 years after she last played? What were the dinner conversations like? "That pitch was two feet outside! ... Elbows off the table!"

I've talked about my mother's connection to sports on this day before. There was no connection.

She tolerated her sons' interest in sports. She still does. Meanwhile, my father would watch sports and play ball with us, but I'd hardly consider him a sports nut. I sometimes wonder how I ever got interested in baseball considering how low on the list sports was in my family before I entered the world.

In fact, I think it's myself and my brothers who turned my family into a sports family. No, my mom doesn't talk about sports any more than she once did. But with the way that sports swirls around me and my brothers, from our jobs to our proximity to a ballpark to the interests of our kids, my mom has developed a sports dominated family without even trying.

You never know what you're going to raise, huh?

Jason Presley said…
Wow, that's pretty cool. Yet, even to this day, no card company has jumped on the opportunity to produce the first Mother/Son card in a baseball card set. A quick googling reveals Helen had at least one card, from a Larry Fritsch set, and there are plenty of photos of her available.
May 13, 2013 at 9:31 AM