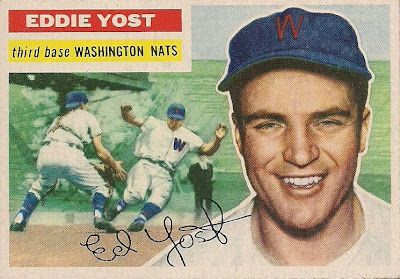 I wasn't going to post today. I don't have very much time and my muse was out to the shop. So I was going to leave you to stare at Pacific cards for another day.

David sent me another little package. He's already provided great stuff like '84 Donruss, '77 Topps, '72 Topps, and a few '56s like the one you see here of Ed Yost. 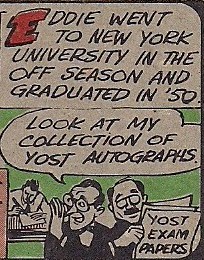 One of the cartoons on the back amused me.

But the Yost really was the lowlight of the package. And, yes, I know I just did a grave disservice to the hobby by calling a '56 card a "lowlight." 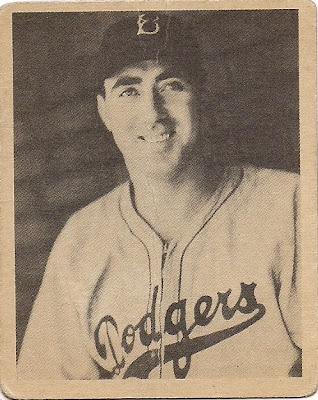 Here is another card out of the package. Dave threatened to send me a Van Mungo card back when I showed the Pete Reiser card he sent me. So I was ready for him.

But I'm not any less thrilled or impressed. A 1939 Play Ball card of the immortalized Van Lingle Mungo! His rookie card! 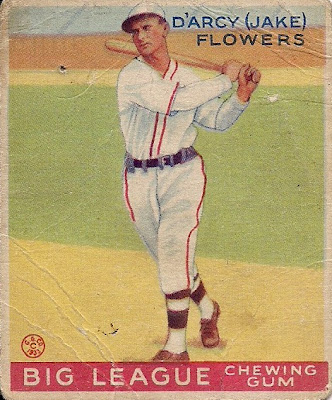 Sir D'Arcy Jake Flowers has the honor of being tied for the oldest card I have along with a couple of other '33s that have come my way. But Flowers is even better because he was a Dodger when this card was issued (he's shown as a Cardinal but the trade to the Dodgers is mentioned on the back).

In my perfect card world, the oldest card I own would be a Dodger.

So I guess you could say my card world is perfect.

And I'm not going to back off of that statement after seeing the following card come out of the package: 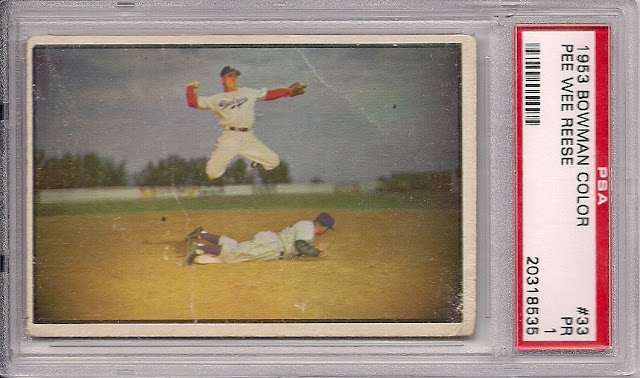 That is beyond amazing.

This is yet another card that I didn't think I'd ever own. The '53 Bowman Pee Wee Reese has been out of my price range virtually every time I've looked one up.

I don't know who in the world could grade this card as "poor." Even if it was folded in sixteenths, it wouldn't be "poor" in my eyes.

Outside of that, I just don't know what to say.

This is a tremendous gesture from a fellow collector. Thank you.

I think I'm going to have to revise the Greatest Dodgers Cards Of All-Time Countdown.

Cory said…
The '53 Reese has always been my White Whale, or Elephant , or whatever they call it.

Michael Chase said…
Amazing! I'm definitely speechless and they're not even my cards!

madding said…
I guess this is an example of me completely not understanding card grading. As in, why people do it.
May 3, 2013 at 9:11 PM

Doc said…
My jaw dropped further as I scrolled down, and eventually hit the floor. Epic, epic, EPIC package. I am sure you are on cloud 9 and that makes ME happy. Yay blogosphere!
May 3, 2013 at 10:30 PM

mr haverkamp said…
Wow, that's some kind of a surprise package to receive, N.O. Icing on the cake will most likely be the result of Kershaw's start in SF tonight (he's currently perfect through 3 and looking untouchable there again)
May 3, 2013 at 11:19 PM

Robert said…
That's an envelope that may never be topped...

Scott Crawford said…
That is literally the best looking PSA 1 ever. And it's not just because it's what it is.

Nick said…
I can't imagine the emotions you must've gone through after opening that package. That Reese has to be the most breathtaking card ever produced.

Stories like these are why the blogosphere is the greatest card community around. And it's not even close.
May 4, 2013 at 1:10 AM

it's also the background image on my laptop.