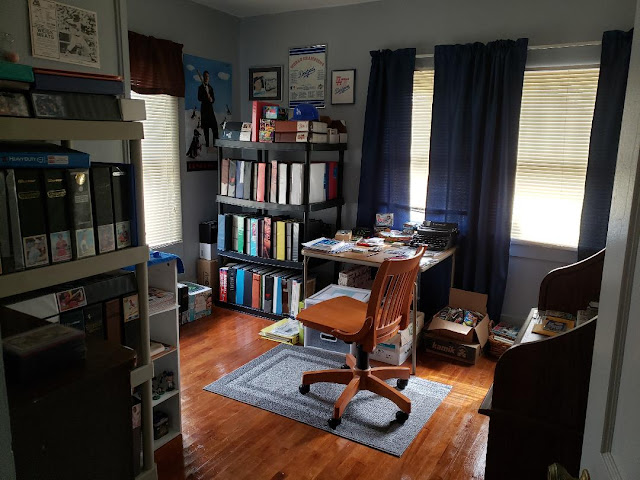 A lot of people are being told -- or just plain choosing -- to work from home these days.

Now, what you're looking at above is the entrance to the card room. Since my first photos, I've updated a few binders, reallocated cards to other binders, and added a display or two. But overall the room is as I want it -- and there isn't much more wall space anyway. 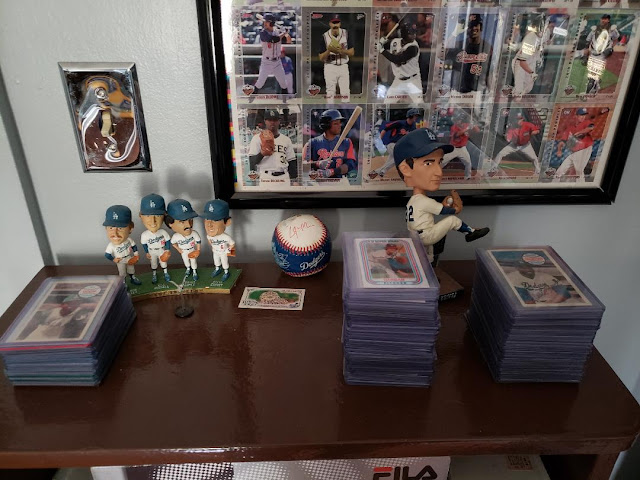 This is the area just around the corner from the entrance. I've added many of my Kellogg's collections to this space. At right is a complete stack of every Dodgers Kellogg's card (variations excluded) from 1970-83. Next to that is my completed 1976 Kellogg's set. And at left are Kellogg's card from the '70s and '80s that are in solid condition -- no cracks, etc. I need more of those. 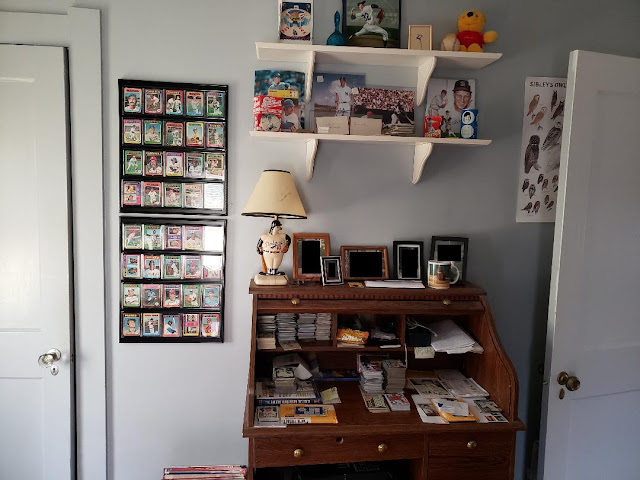 Another view of my card rolltop desk. I've added a second display of 1975 Topps -- the original cards I collected from that year. Also, those of you who have sent me stuff recently might spot it on the left side of the desk.

The closet on the left is mostly clothes, but it's also where I stash many of my dupes these days. 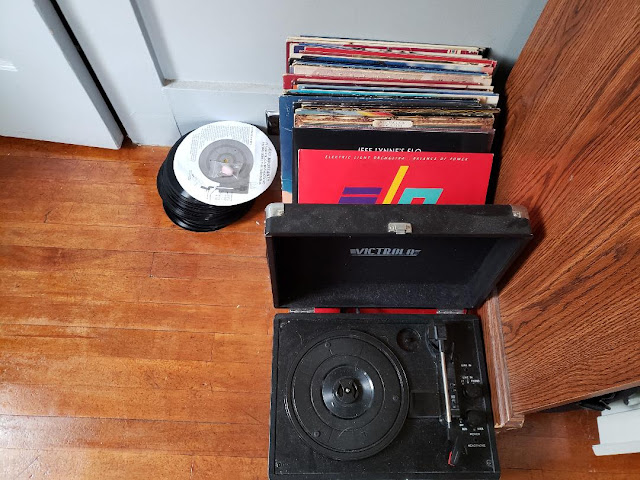 This is my cute little record player that I use ALL THE TIME. I come from an era where music at its pinnacle was played on Hi-Fi's with monster speakers and equalizers and all that good stuff that could light up your night. Things are more primitive these days and that's OK.

And, yes, ELO's final record (as the original band anyway) -- the much criticized "Balance Of Power" -- is front and center. Don't be bad-mouthing that record. It's better than most people say. 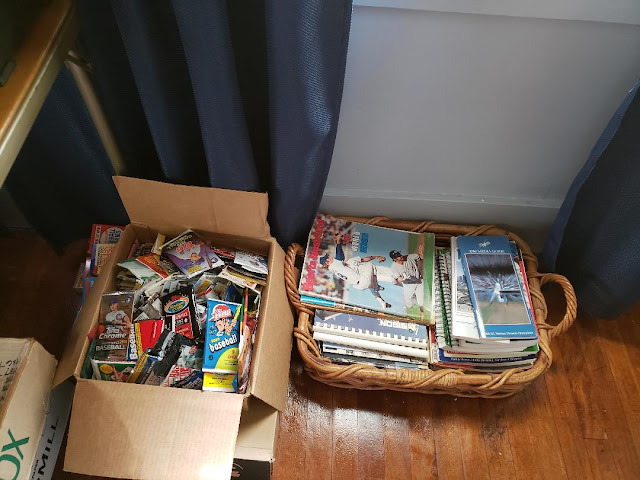 A couple of new additions, next to the card table where I do all my packaging, etc. One features magazines and media guides of importance to me, stuff from the '70s and '80s mostly. All my Baseball Card Magazines are in there, too.

At left is a box of all of the card wrappers that I've opened over the last decade-plus. I make a note to save one for every product I open and in the box it goes, willy-nilly. 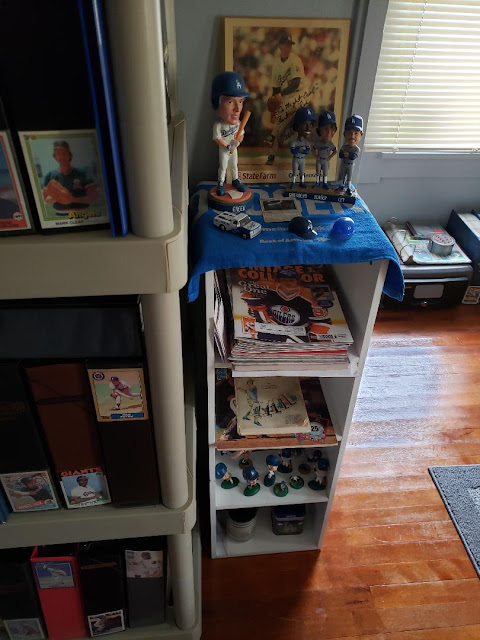 As I mentioned in the earlier room post, this is where I keep my Beckett Vintage Collector magazines, among other decorations and such. The newest BVC, the one with Willie Mays on the cover, is out -- or at least should be out very soon -- but I'm not in that edition. So, you know, don't be heartbroken or anything. 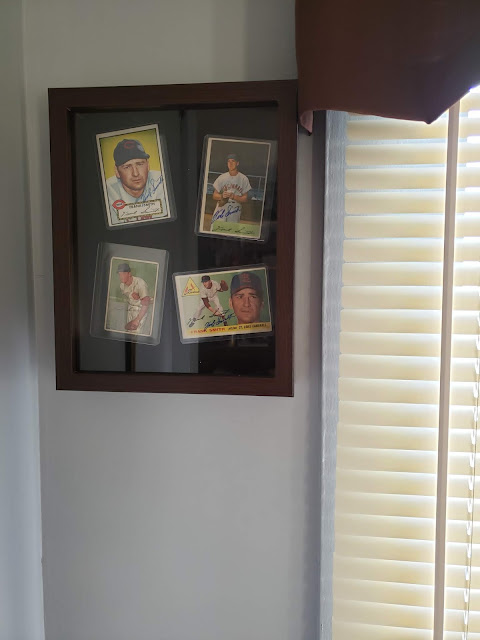 This is the most recent addition to the room.

It's a shadow box display of the signed Frank Smith cards that I received from the late former ballplayer's good friend after Smith passed away. As I've mentioned before, I wrote a big story on Smith back around 2002 and it left an impression, as he did on me. 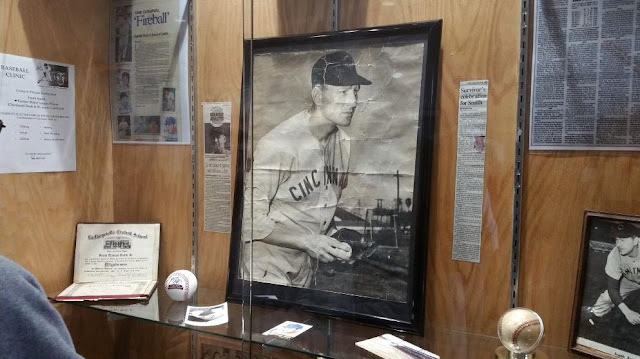 I've shown this before, too, but this is the display of Frank Smith at his high school alma mater, a small school about 20 minutes away from here. All of the newspaper articles on the wall there were written by me.

So, I figured, if my articles are on display at the school, I should at least have a display of Frank Smith in my card room!

Anyway, those are the updates such as they are.

I hope now you can see why I want to be working from home 40 hours a week.

Jordan said…
no badmouthing Balance of Power here. Heaven Only Knows is still an awesome way to open an album
March 18, 2020 at 7:44 PM

Jamie Meyers said…
I'm impressed with how neat and tidy everything looks. "Balance of Power" is not my favorite ELO record by any means but it's not bad. I see the latest one, billed as Jeff Lynne's ELO, behind it. Is that any good?
March 18, 2020 at 7:52 PM

Zippy Zappy said…
I hope you're sharing your honey flavored Halls cough drops with Winnie the Pooh.
March 18, 2020 at 8:19 PM

Base Card Hero said…
I love it. It is a lot of fun to see how other collector's store and showcase their collection. I really like the shadow box with the four cards in it. I may do something like that for myself.
March 18, 2020 at 8:57 PM

Fuji said…
It's always fun to see other collector's card rooms. Never thought about keeping one wrapper from every product I opened. Might need to start my own wrapper box... but in reality... I just don't have the room. I might have to go out and buy one of those shadow boxes though.
March 18, 2020 at 11:23 PM

CrazieJoe said…
Love the Smith shadow box - just for the memories and feelings it must bring up for you.
March 19, 2020 at 6:39 AM

GCA said…
Nice tour! Might make one when I get to stay home.

I keep two of the neatest opened wrappers with the sets in boxes. I bought a few sets already bindered, and the guy had put the wrappers in four pocket sheets in front. Cool idea.
March 22, 2020 at 12:20 AM