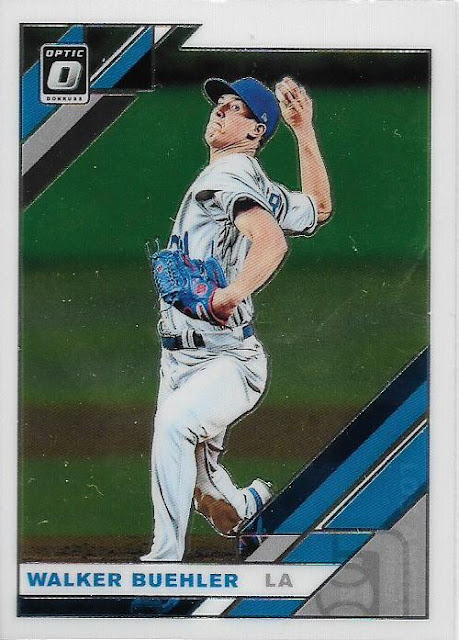 Spring fever must have hit collectors around the country because envelopes containing cards have been flying all over the home nest the last couple of weeks.

The card desk ran out of space for incoming envelopes for the first time in a long time, so I tried to scan a bunch of the recent goodies to clear some room -- which is a bit tricky right now because my scanner is at close to floor level and some recent minor surgery has made it difficult to reach upward or downward -- but the envelopes only kept coming to the door!

There are at least two more that I need to get to and then two more packages hit my mail box today. Good gosh, I need a staycation to handle all of this.

I'm going to make a little space for myself right now by showing off some of the generous items here.

I want to start with an envelope from Fuji because a whole bunch of bloggers have posted recently about their envelopes from him and I know you were beginning to think I didn't get one. 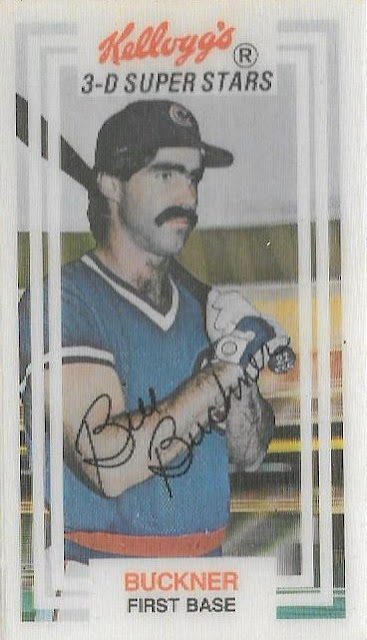 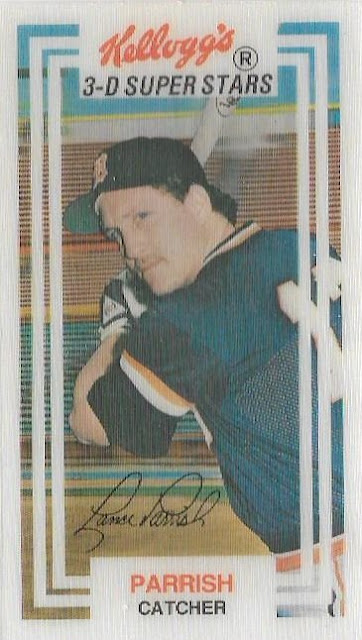 Fuji and I are two of the most avid Kellogg's collectors in all of card bloggery. I think he's enjoyed more progress in his Kellogg's quests than I have -- mostly because he isn't as easily distracted.

He found a couple of needs for my 1983 Kellogg's set, what was Kellogg's final farewell as far as I'm concerned. I'm interested only in Kellogg's cards from 1970-83, the golden age of the best food issue ever created and '83, although probably the dullest of all Kellogg's sets from this time, just makes the cut. 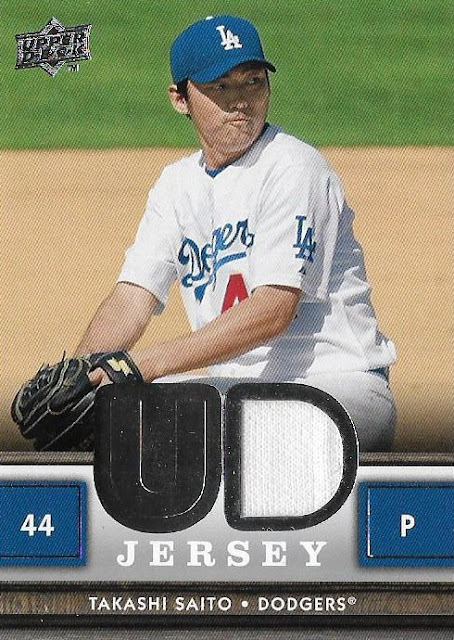 I miss baseball when Takashi Saito was pitching for the Dodgers. It was a more interesting time with him on the mound. Saito just celebrated his 50th birthday last month, which stunned me to find out someone who was so dominant not all that long ago all of a sudden is 50? 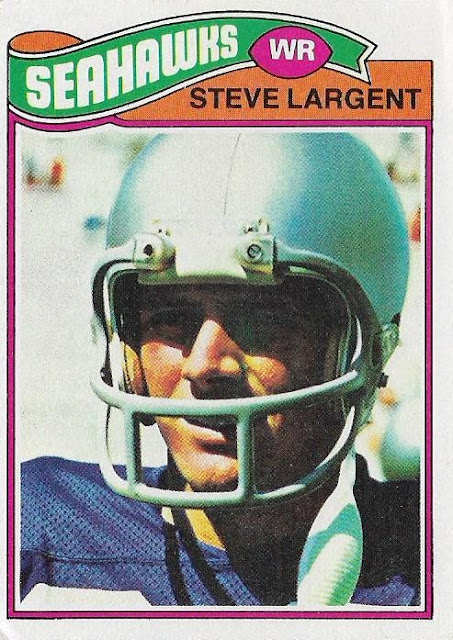 Probably the star of all the envelopes I'm going to reveal here today. This is one of the toughies in the 1977 Topps football set that I'm trying to complete. It's Steve Largent's rookie card. I had a chance to buy this at a card show a while ago but my wallet slapped it out of my hands. This was interesting. Fuji sent a packet of 1991-92 Pro Set hockey cards, which I believe came from the 1975 Baseball Cards blog. No, not that one. Why would I send cards to myself? This one.

If my speculation is right, that is an interesting development as I didn't know someone who seems to be the only blogger to rival my love for the '75 baseball set would have early '90s hockey cards like this: 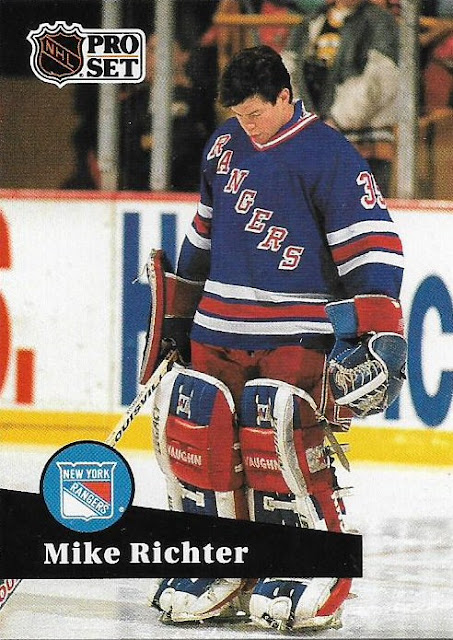 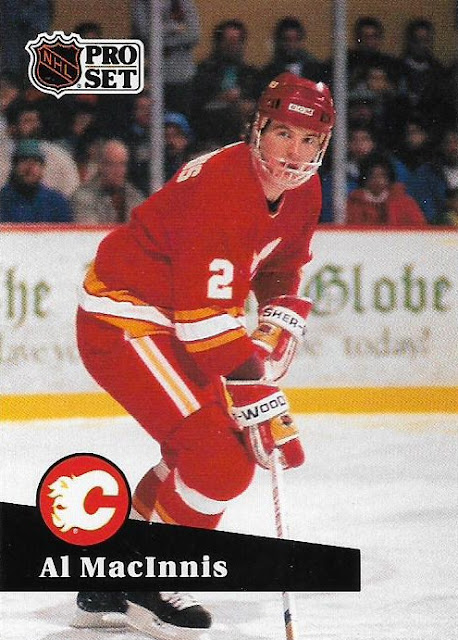 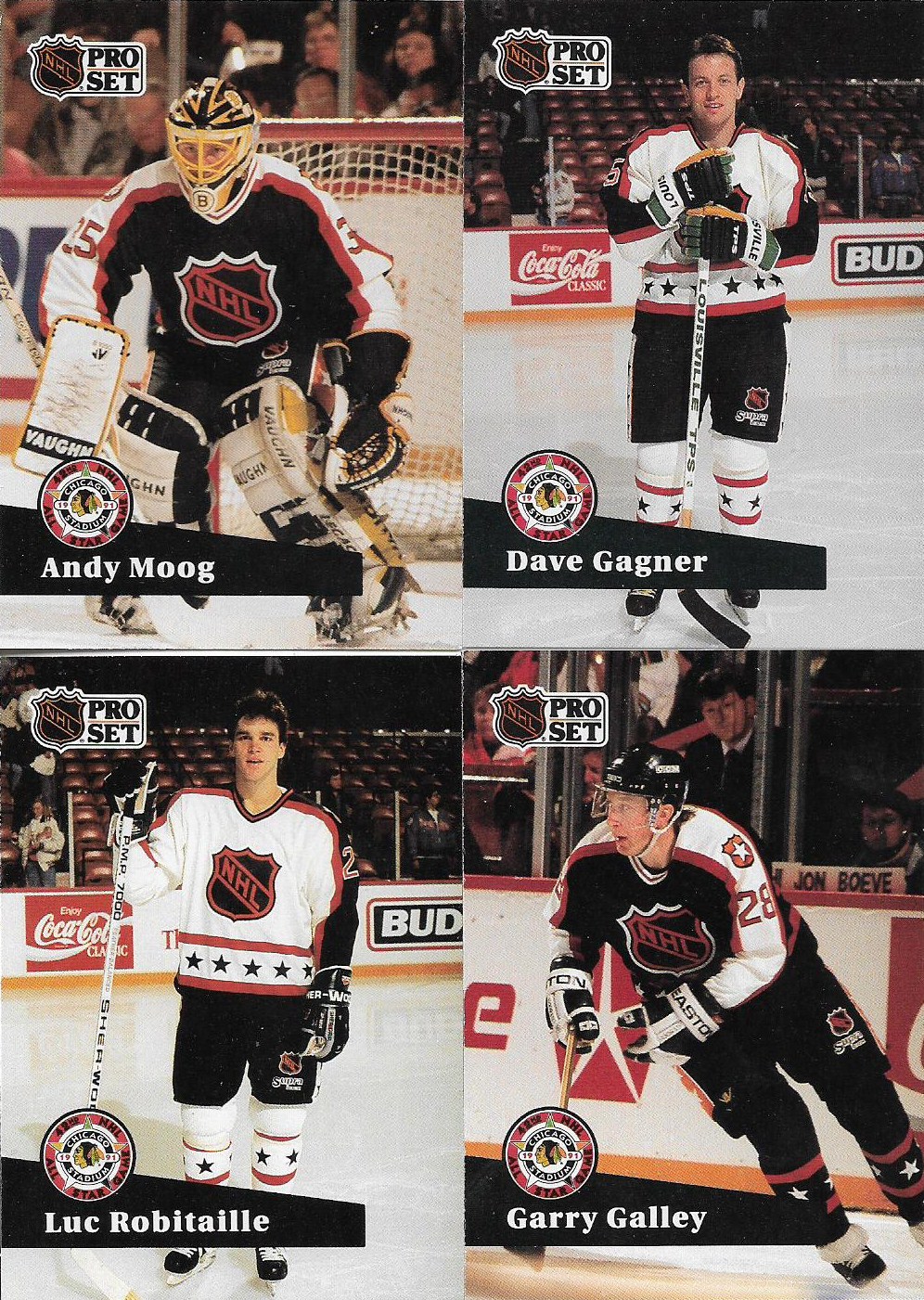 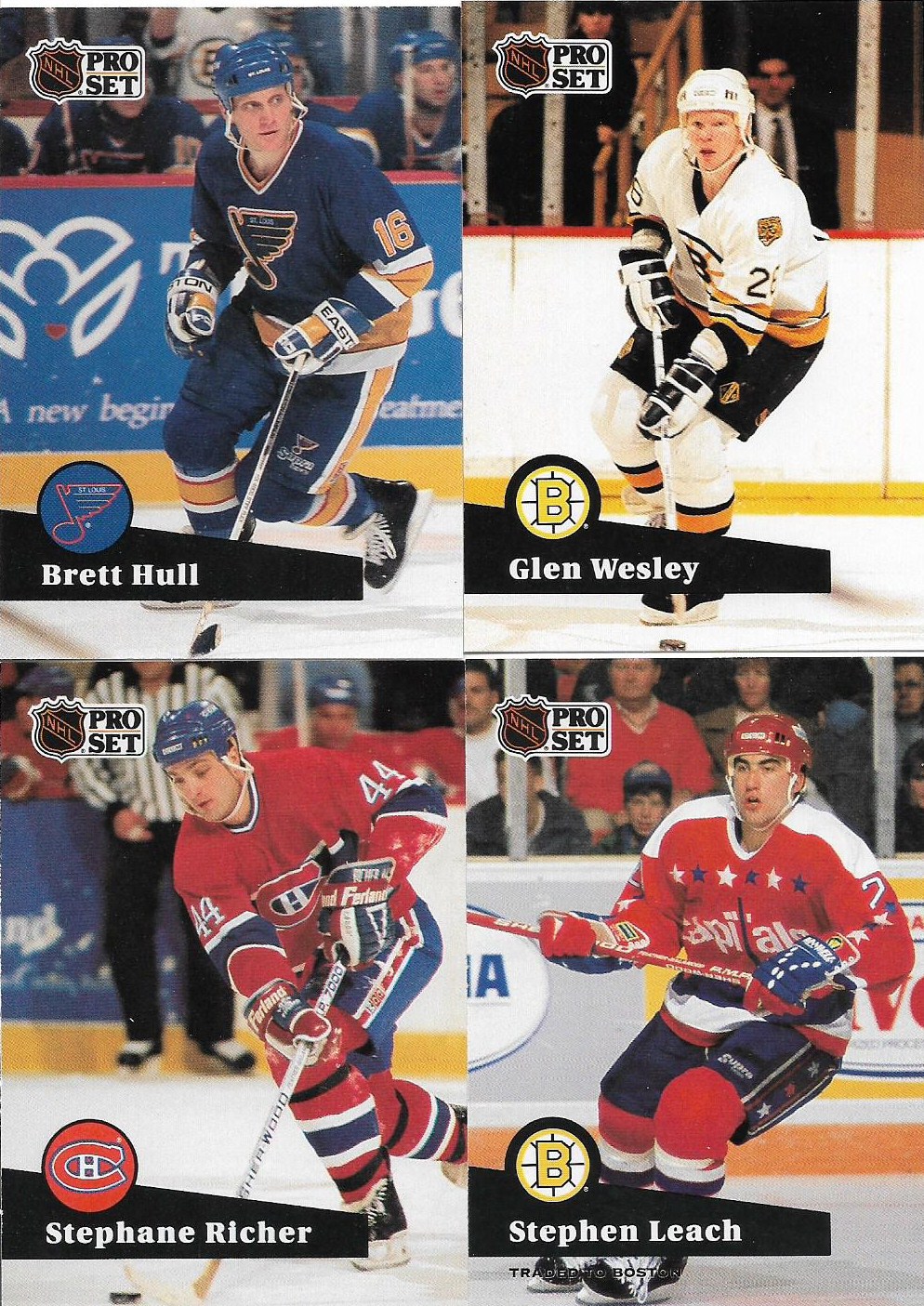 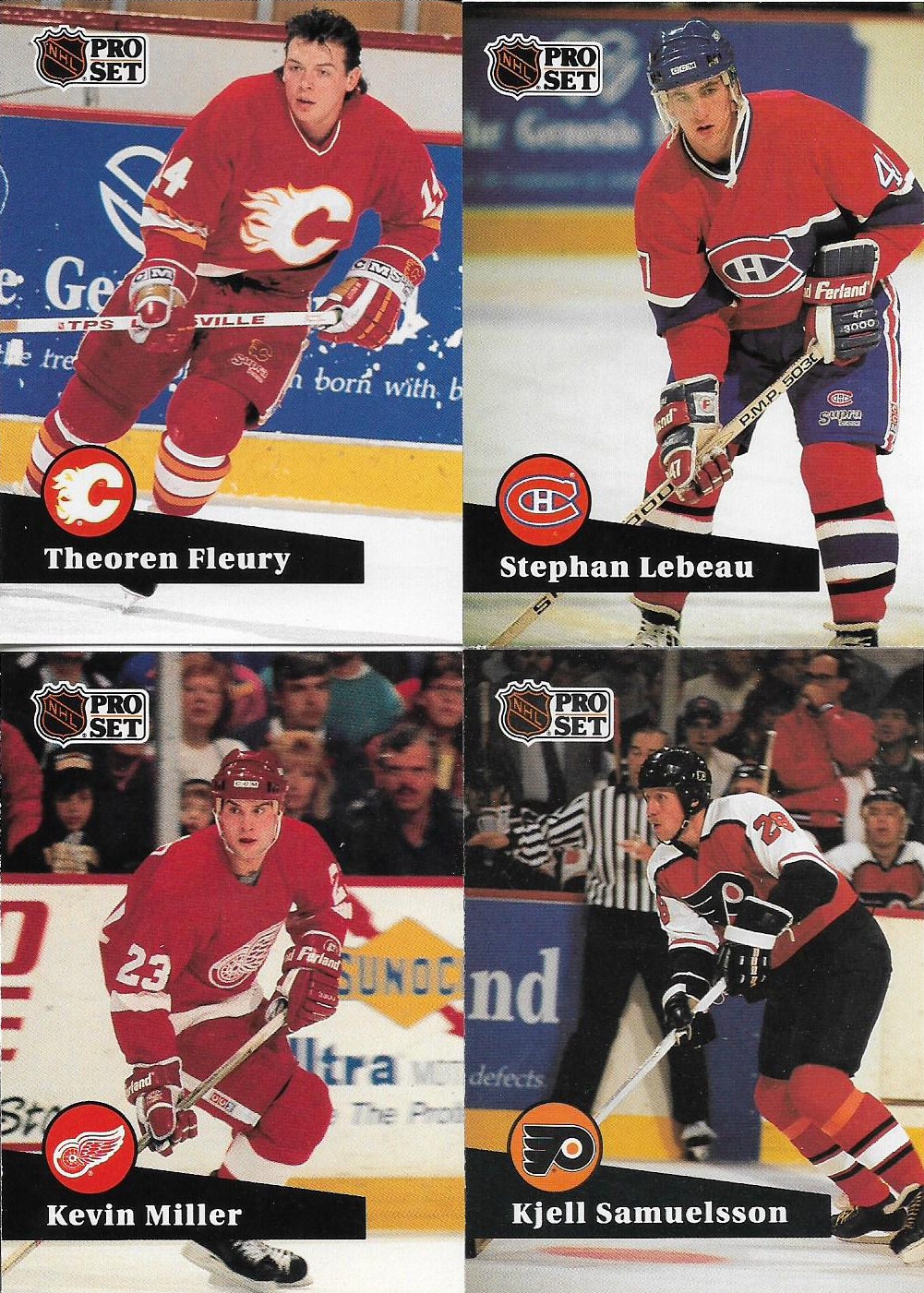 Yeah, I know. You're dying to tell me that 91-92 Pro Set grew on trees and every house has some of the cards somewhere. But that's a lot of wasted breath you could have spent sending these cards to me.

This is the most meaningful hockey set of my life. As sad as that may seem, I need all the cards. Even the French backs. But I'm  not crazy enough to collect both the U.S. and French sets.

OK, let's get back to baseball and stuff you're more accustomed to seeing from me. 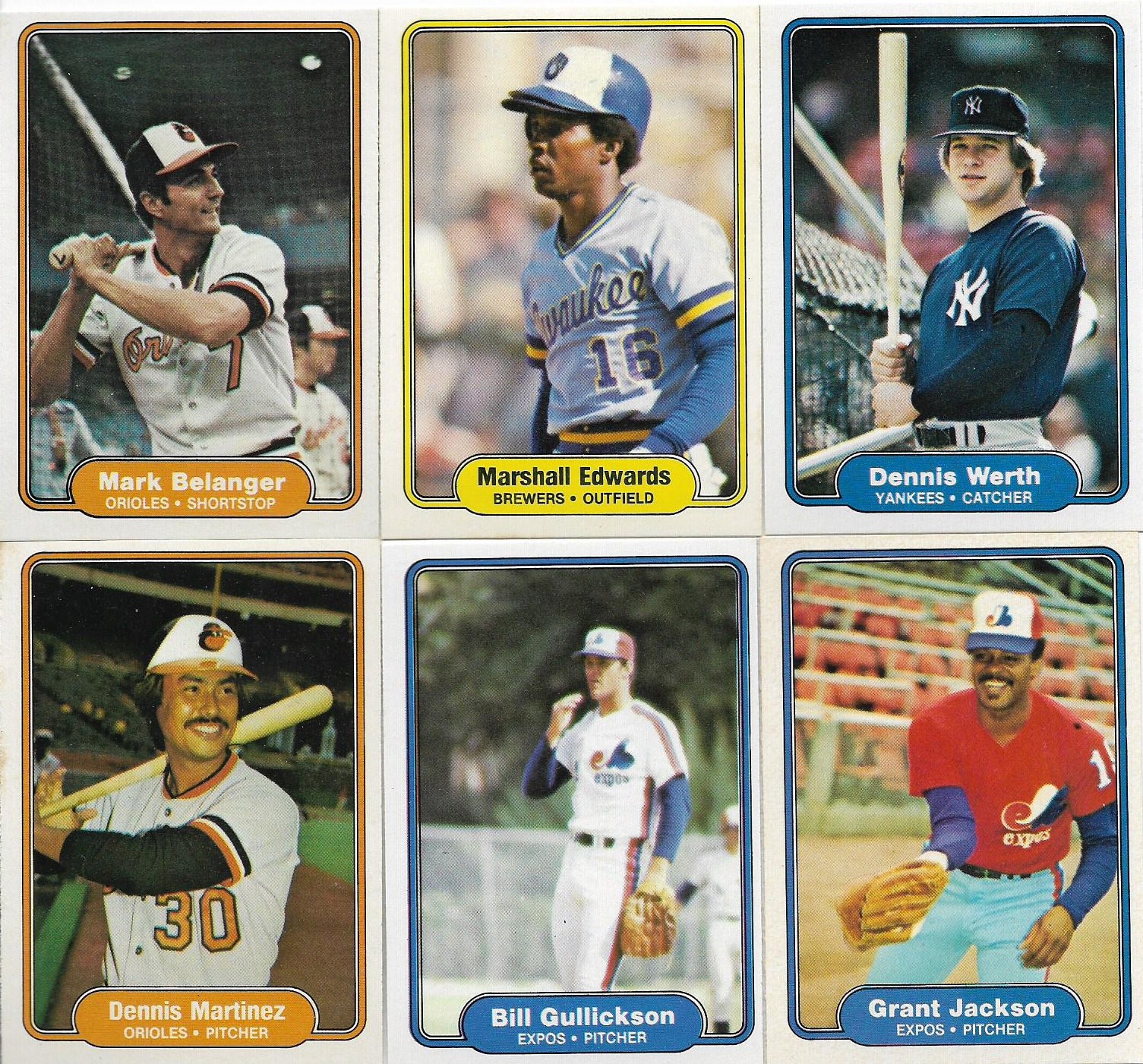 Yes. Some splendid, dark, off-center, bizzare 1982 Fleer. I sent out another request for my '82 Fleer collection quest and reader Brett Alan found some for me. 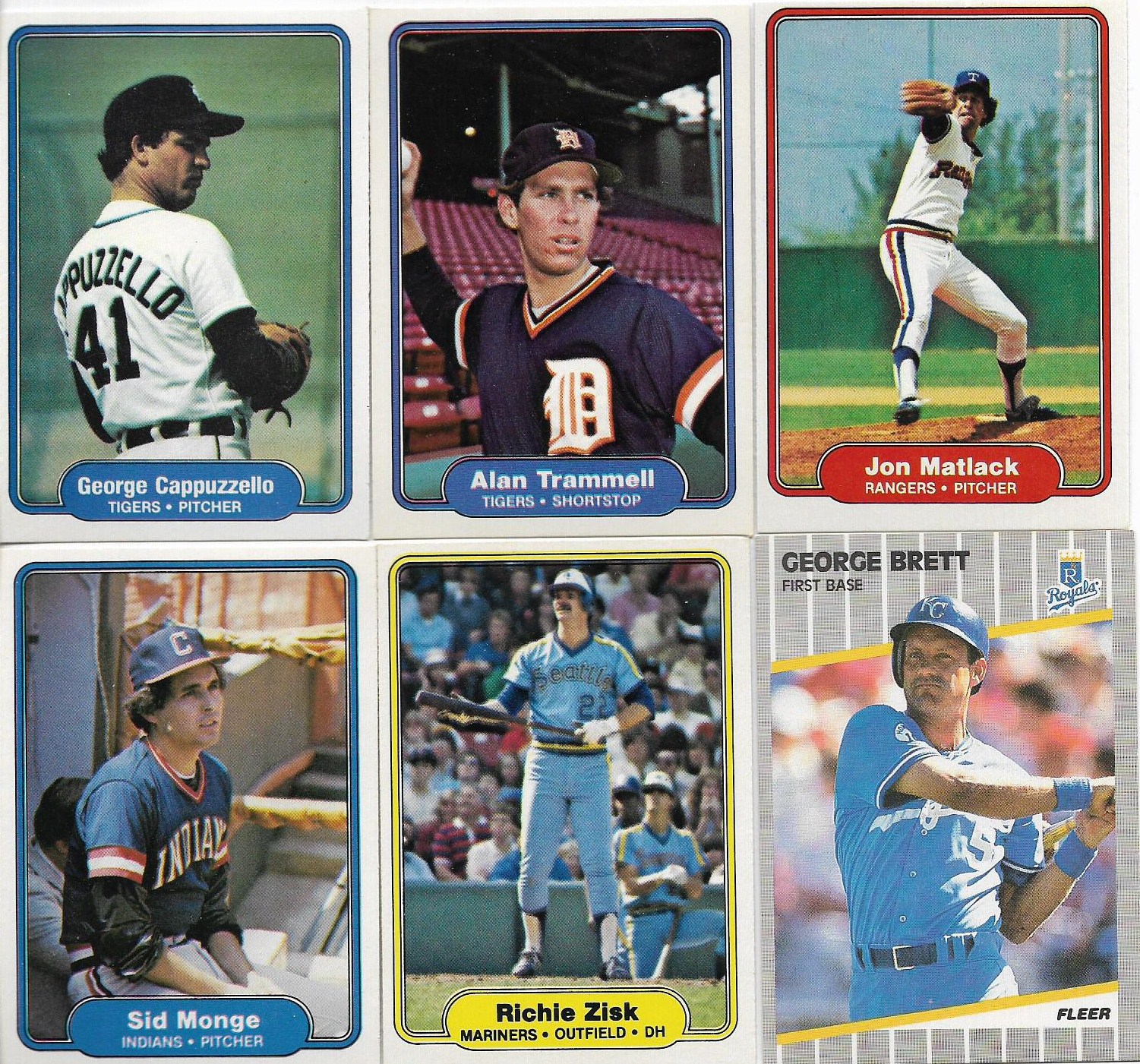 Some more. And even an '89 Fleer George Brett thrown in because ---- shhhh -- I'm trying to complete that set, too. (Please stay to the '89 Fleer want list, don't be bombing my front lawn with '89 Fleer boxes).

I appreciate the renewed attention to my '82 Fleer list. I want to get this finished before the year is out. I was contacted by another collector, Rob, who had some more '82 Fleer needs. I responded back a couple times with what I had for him, but he's gone quiet. Come back Rob! Very important set completing is at stake! 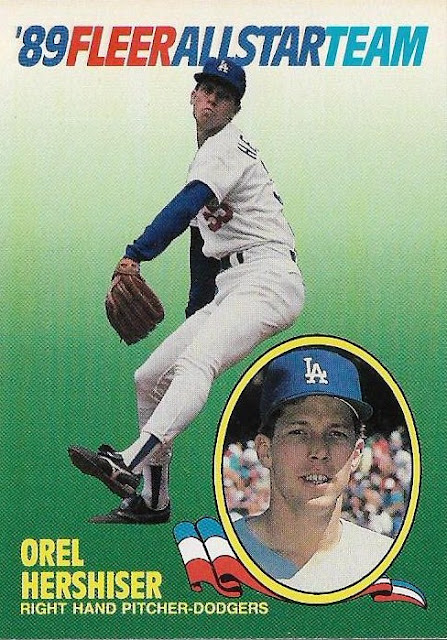 Another silly 1989 Fleer request arrived recently -- this time from gcrl of cards as I see them.

I don't know why I put this Hershiser on my want list. Is it possible I didn't have more than one in my collection? There doesn't seem to be anyway that could happen. There's probably six of them in the big Dodger box of dupes. But I appreciate not having to dig through that, Jim. 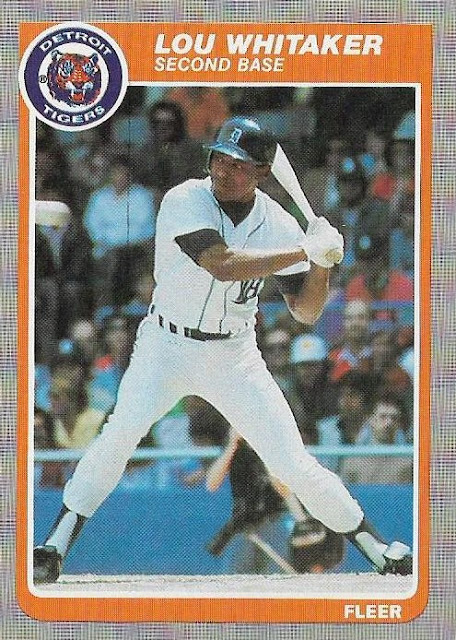 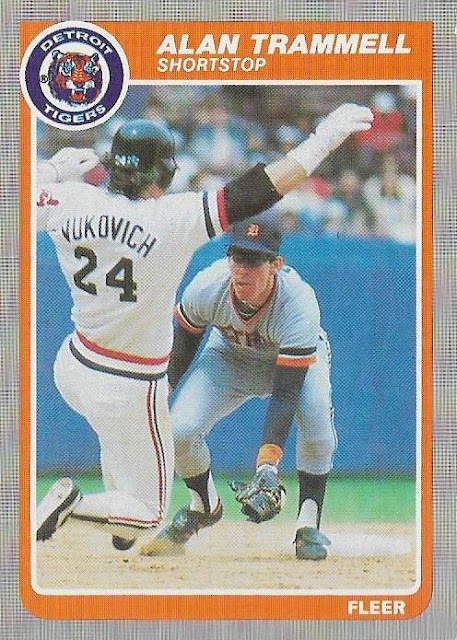 Who else besides Jim, the double-dip king, would have these two 1985 Fleer cards for my '85 Fleer completion bid? 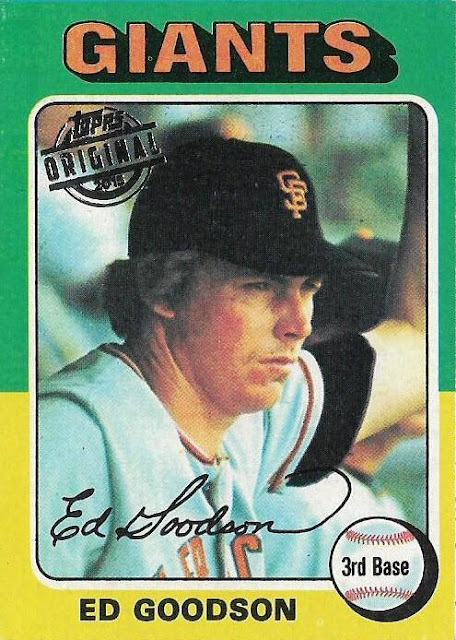 Here is a card that automatically makes a card package a good one: a 1975 Topps buyback card that I needed. Former Dodger Ed Goodson's buyback is the 365th in my collection. You honestly can't send anything better in a card envelope than a '75 buyback off my want list.

Well, that was kind of stupid to say. Of course there is better stuff. A '52 Jackie Robinson, a '56 Clemente, but I'm trying to be realistic. 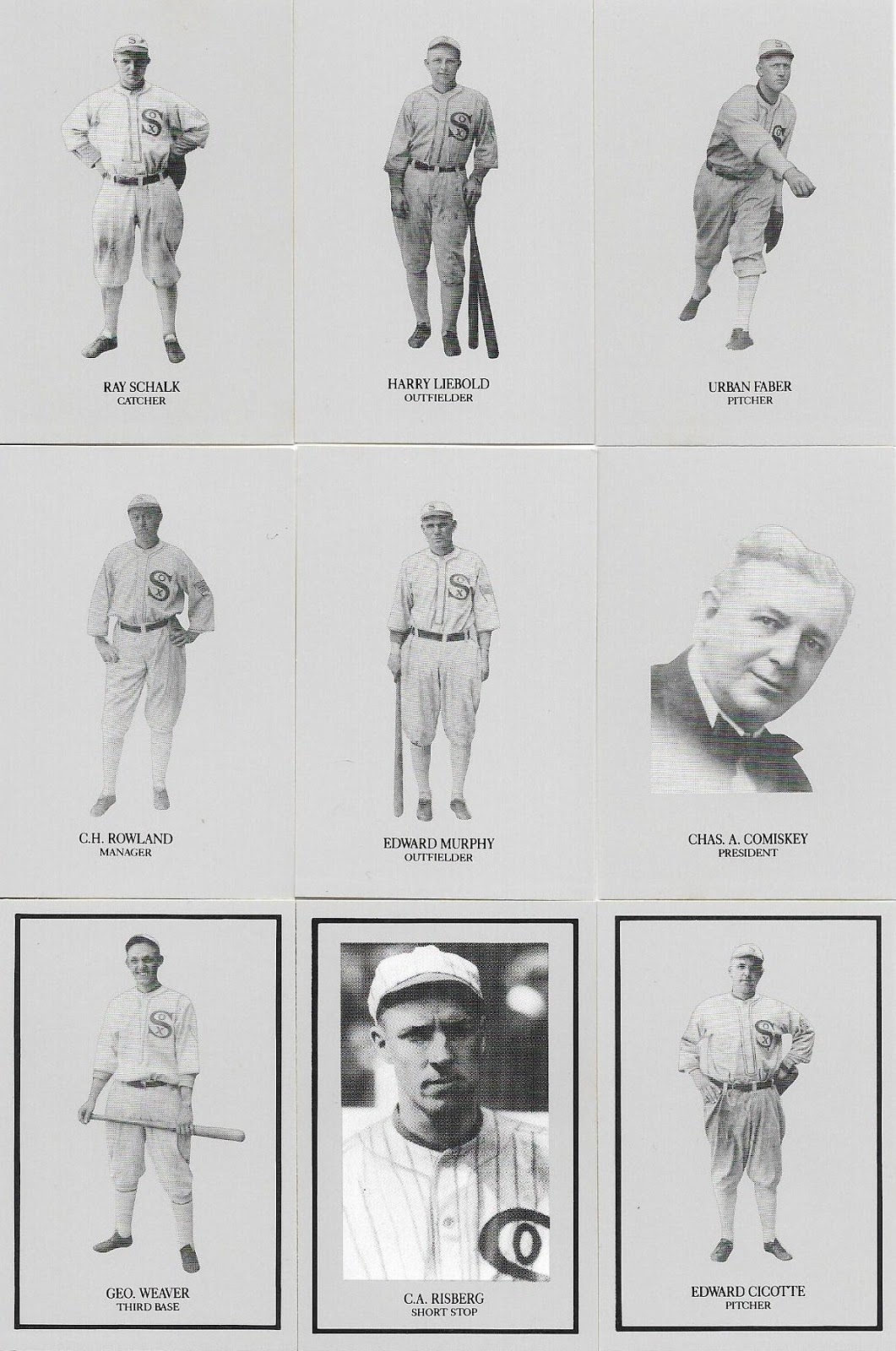 The next small envelope of cards is from Johnny's Trading Spot, part of his Big Fun Game freebies. I chose, Door #1, if I remember correctly, and landed these mini-sized tributes to the 1919 Black Sox.

I have no idea what these are from, I believe there are more (just because Shoeless Joe is missing). I also don't know why only the black-bordered ones have writing on the back (or why only three of them are black-bordered).

Kind of a neat little item.

Johnny sent along another card with those that was unexpected. 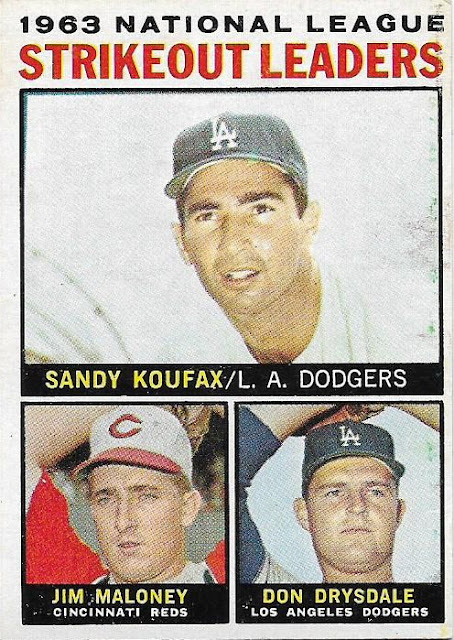 SURPRISE!, the note said, as this 1964 Strikeout Leaders card fell out of the envelope.

This is a card I have in my Dodger binder already but it will go nicely with my small assortment of 1964 Topps cards.

Also, I have an even bigger surprise than that.

Another envelope arrived from Tom of Waiting 'Til Next Year a couple of days later. He was sending a few cards in return for the 2020 Dan Vogelbach foil card I sent his way. It really wasn't necessary that he send anything in return.

But I appreciate it because I got this Gallery card of Max Muncy: 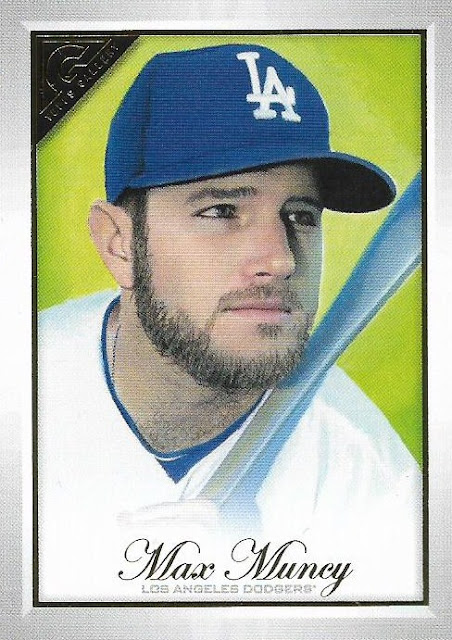 This was a need as I don't think a lot of people bought 2019 Gallery, I know I sure didn't. I honestly don't need to see painted chest hair.

Tom also sent a couple other cards in the envelope, including this one: 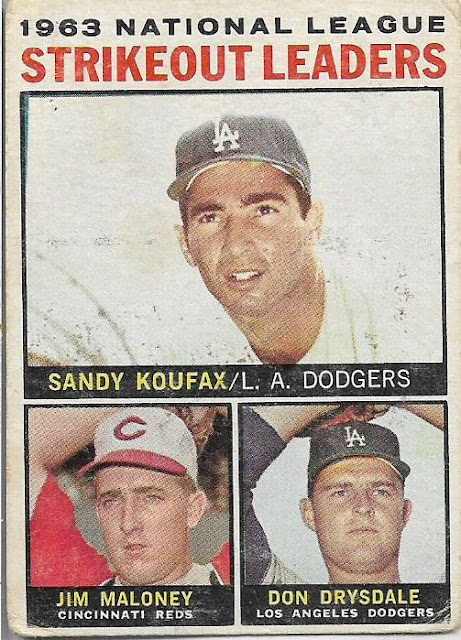 It's going to be another fun card year isn't it?

buckstorecards said…
You do realize how many of those Pro Sets are in repacks, right?

Johnnys Trading Spot said…
Your mini cards are part of a 26 card set. The Big Fun game will hold the missing cards (2 different games though).
March 5, 2020 at 9:44 PM

Nick said…
The black-bordered cards in the Eight Men Out set feature the guys who were thrown out of baseball (Weaver, Cicotte, Risberg, etc.). The others are guys who played for the 1919 Sox (or were linked to them in some way) but weren't part of the gambling.

Fuji said…
A. I wish I didn't get distracted easily. It's one of my biggest flaws. I blame the ADHD ;)

Brett Alan said…
Happy to put a dent in that Fleer wantlist. Seeing a package I sent on this legendary blog is definitely a milestone!
March 6, 2020 at 10:39 AM