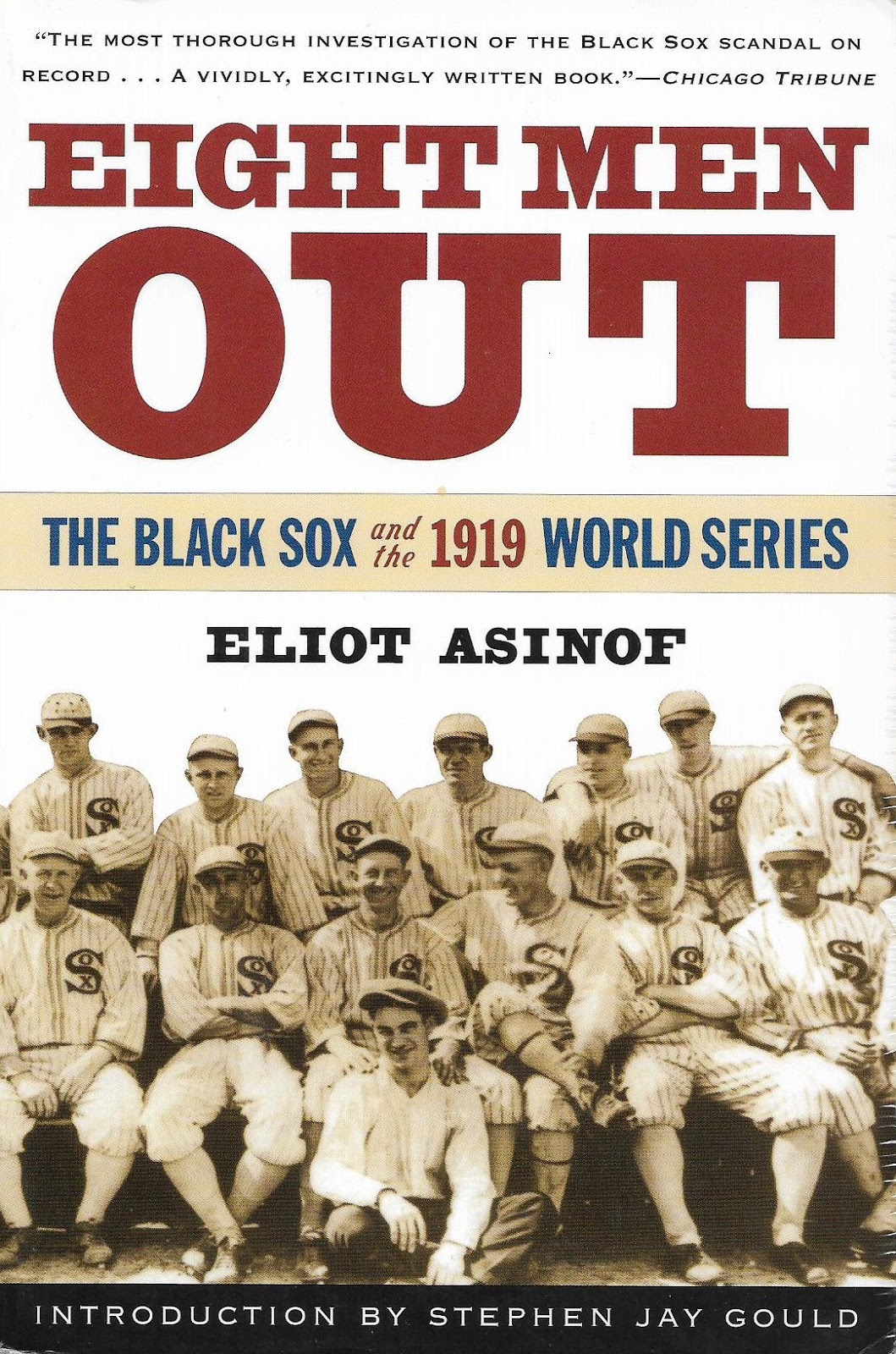 I haven't received anything that truly connected with my collection. But my interests are broad enough that I've been able to make things work and, thanks to a bit of luck, I now have a new set to build.

In the first Big Fun Game, I landed these: 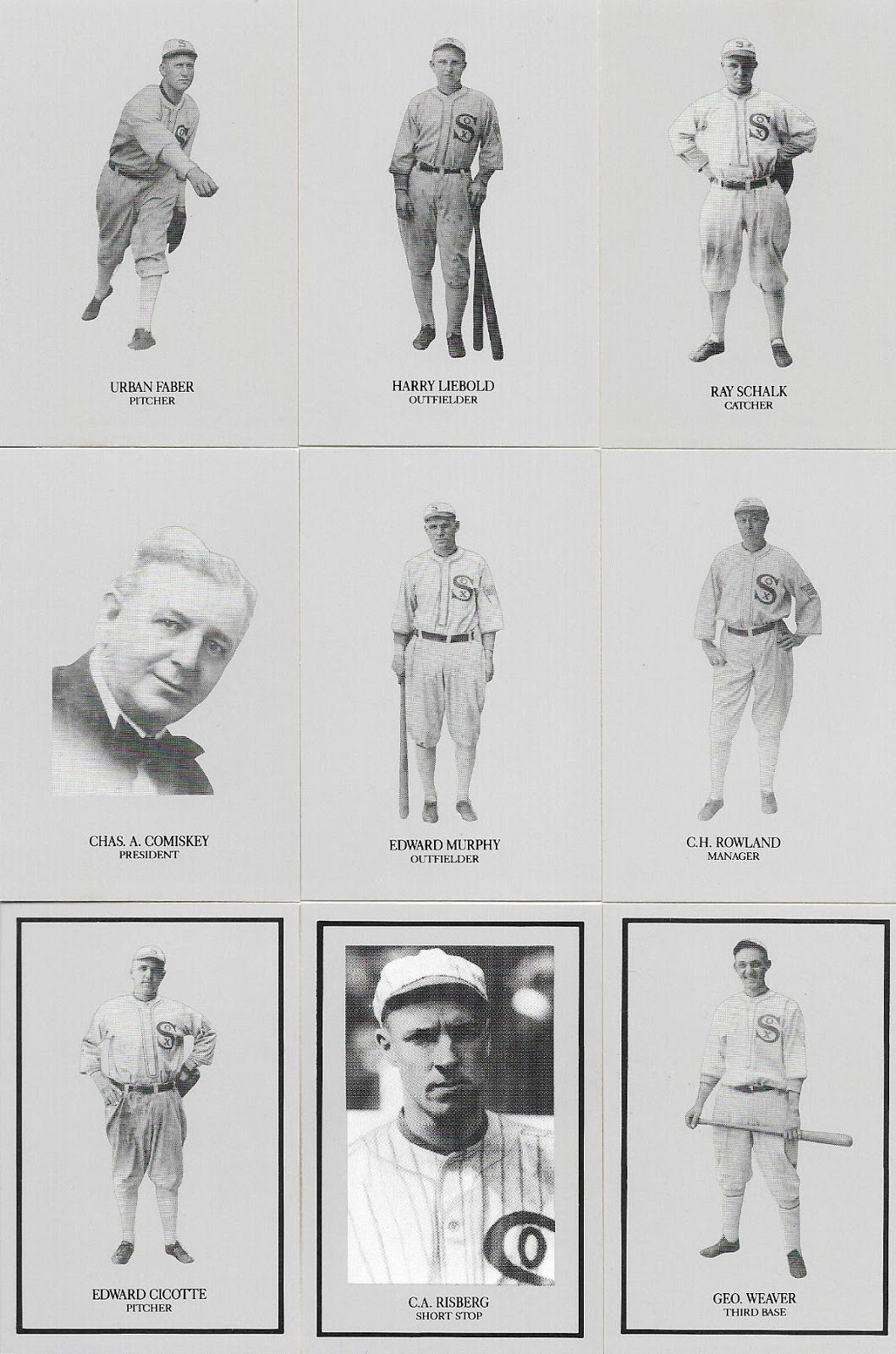 All I knew about them is they were from a set dedicated to the 1919 Chicago "Black Sox" and I recognized the names as members of that team. I've read the book. I watched the movie quite some time ago.

But I didn't know any more than that.

The second Big Fun Game came around and somehow I landed me some more cards from that same set! 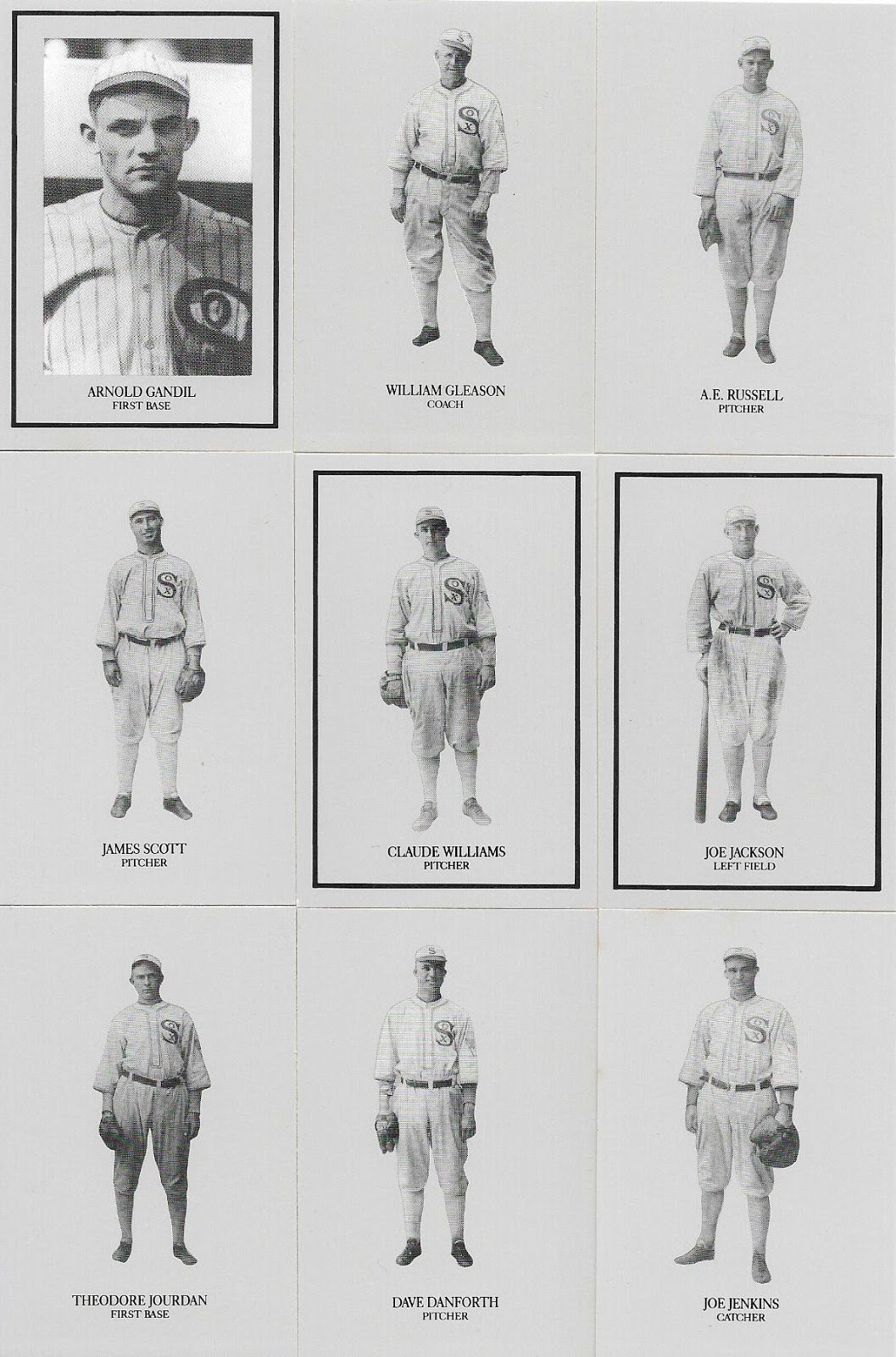 OK, now that's 18 cards from that set in my possession. Logic told me that there were probably other cards from this set, but likely not many more.

I probably should try to complete this thing!

But before attempting to complete it, I had to know what the heck it was.

It didn't take long to figure it out. A trip to Trading Card Database, a visit to the SABR Baseball Card blog and I was done.

The cards are based on a 1917 team set, issued by the White Sox, and offered to fans as a boxed set. It is the only set, according to the SABR blog article, that features all eight of the players who were banished by Commissioner Landis for throwing the 1919 World Series. Apparently that set is super rare and there may be only one of them in the world.

But the '92 set isn't rare, obviously, so if I'm going to complete a Black Sox set, this is the one to complete!

According to TCDB, there are 26 cards in the set, so I'm eight cards short of a set. There are two Joe Jackson cards, one is in color for whatever reason.

The '92 Manning set embellishes on the 1917 set by adding black borders around the "Eight Men Out" players, the eight figures who were banished. Those eight cards are also the only ones in the set that feature bios on the back. The other backs are blank. 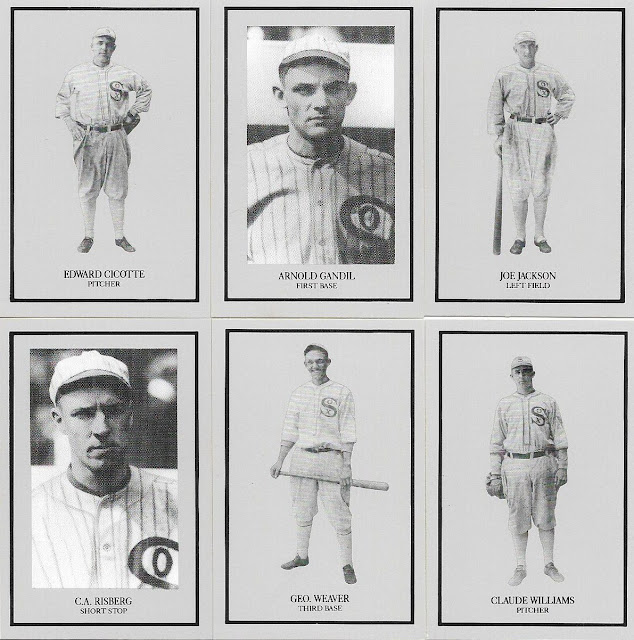 I have six of the "banished" eight. I'm missing Happy Felsch and Fred McMullen.

It's not like me to try to complete White Sox sets or even random reprint sets from the '90s. But I have always been interested in the Black Sox, it's one of the major moments in baseball history, full of intrigue and drama and misfortune. Shoeless Joe Jackson was born the same day I was so I have always looked for any of his cards that I can afford (there aren't many).

So, now that I know what these are, I can finally record them in my card database and then attempt to find a way to store these oddly-shaped items.

The best part of this is I gained some knowledge about a set I knew nothing about a month ago.

RunForeKelloggs said…
" I have always tried to look for any of his cards...". Sorry, I laughed out loud before finishing that sentence. Thanks for giving me a nice start to the day. I'm glad I don't focus on White Sox cards.
March 22, 2020 at 9:16 AM

Chris said…
I've never see these before. They're very interesting cards, particularly the black borders separating the 'crooked' players from the legit players. Good luck finding the last eight men!
March 22, 2020 at 10:38 AM

Fuji said…
I know set building is much more entertaining... but if interested, you can get the complete set with the box for $2.95 (free shipping) on eBay:

AdamE said…
Somehow I got a Fritsch Catalog this year. I must have bought something from them on eBay. This set is on page 110 and cost 32 bucks. (so flow Fuji's link don't go to Frisch)