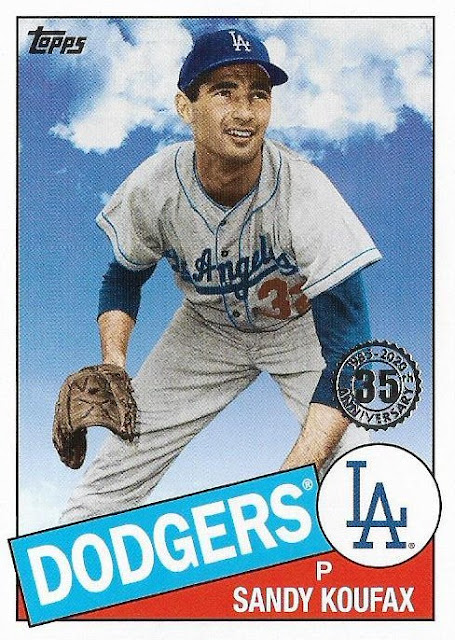 Topps loves to rehash its old designs and it knows faithful collectors like me will eat it up because they grew up with Topps and they love the old designs (better than the new designs).

But I will eat only so much. I know when I'm full (kind of). Topps is forever riffing off its old designs in Archives and insert cards like the one above, sent to me by Cards On Cards recently, and yes, there is a blue-bordered parallel of this '85 Koufax on COMC right now.

Even though I adore colored-border parallels, I'll take my reverence only so far. Much of what Archives produces and those inserts yield, I can take or leave. 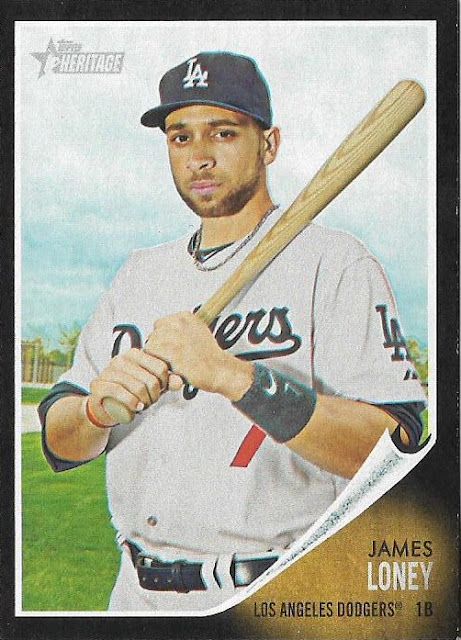 But when it comes to Heritage, and doing border stuff with old designs, that's when it gets serious.

I started to become aware of Heritage creating colored border parallels in 2011. The black-border parallels were part of retail blister packs and they were all the rage.

Although Heritage chrome black borders were a thing prior to 2011, the 2011 Heritage set is interesting to me because the cards resembled the wood-bordered 1962 set. The '62 set was the first time that Topps featured a design without a white border.

Creating colored borders with white-bordered designs is easy. You're not drastically altering anything. But when there is no white outlying border, it gets interesting. You're causing havoc with the whole look. 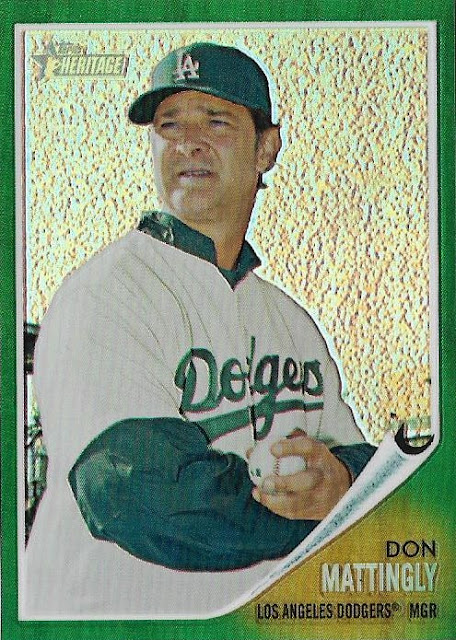 To stay connected to the original '62 look, Topps left a little "unpainted" wood in the lower right corner where all the factoids are. Perhaps the designer wanted the tiny type to still be readable, but part of me thinks Topps couldn't handle erasing all of that wood.

Until last year, this was the last year that Heritage had paid tribute to a non-white bordered design. Then 2019 Heritage came along with its tribute to the 1970 gray-bordered set. 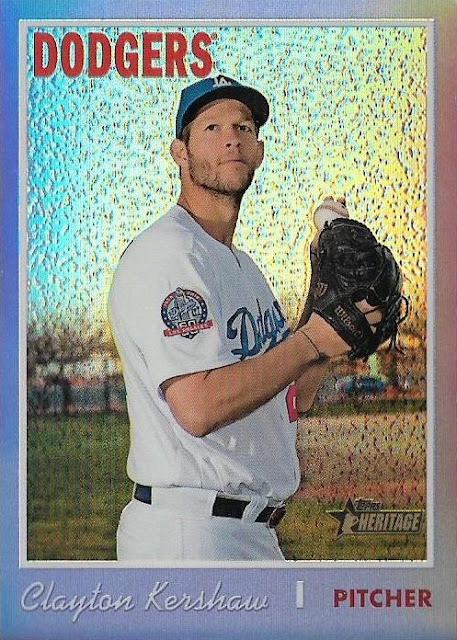 This is one of the "hot box" purple chrome parallels from 2019 Heritage. I'm not sure when hot box purple became a thing with Heritage, I remember pulling them in 2014 Heritage for the first time.

Since the arrival of these Heritage purple parallels, the cards have displayed a deep purple color. But the 2019 Heritage cards don't, they're more like a lavender.

Again, I wonder whether Topps didn't want to totally erase the gray-bordered theme by coming up with the closest way that purple could look like gray. 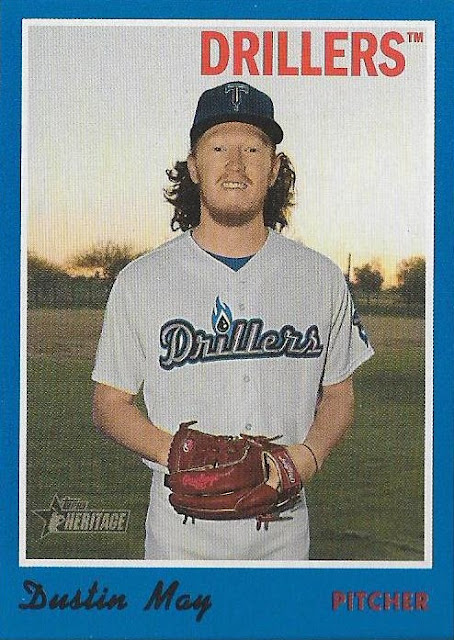 OK, never mind. Clearly, they have no attachment to that gray border.

But this is an interesting time period for Heritage because of the back-to-back non-white-bordered cards from 1970 and 1971. 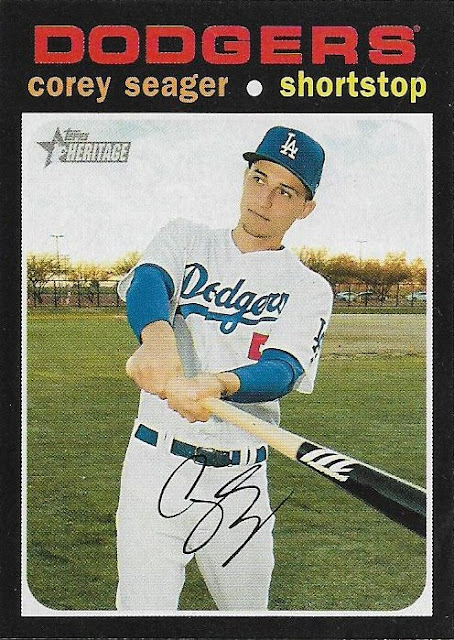 Here we now are with the proud, deeply black borders of 2020 Heritage and would anyone want to mess with those things just for the sake of a stupid parallel? 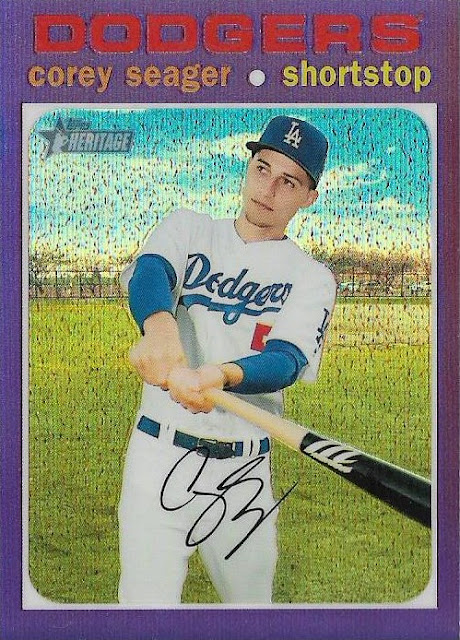 This is another card from the Cards On Cards package (the regular Heritage Seager came from Padrographs, more on his shipment later and his sneaky attempt to hook me into collecting another set).

The Heritage gang must be freaking out because they CAN'T MAKE BLACK BORDER PARALLELS THIS YEAR. But the purple ones are still here and I'm pleased to see the darker purple color has returned.

It's quite the gaudy card with red and orange and purple. But in general, I don't mind these "remakes" of the original cards. As much as I appreciate those vintage sets and think they're the best ever, I don't consider them untouchable. People who don't like the colored parallels simply don't have to buy them.

2020 Heritage is the last Heritage set to encounter a non-white-bordered design for the next few years. We'll get colored border cards on the '72 design next year (talk about gaudy, purple on the psychedelic tombstone design?), and on the next two.

My goodness, I don't know how I feel about that.

I don't even know what a parallel will look like with that set (what Archives attempted for parallels with its '75 tribute last year was just bizarre). Anything I can imagine doesn't look good to me. And I'm sure, even though I had no issues with coloring up '62 or '70 or '71, I'm going to be wincing through every parallel treatment of 2024 Heritage. It's not going to be pleasant.

I suppose '75 Topps IS untouchable. Or too close to my heart anyway.

Anyway, those were my thoughts when I started opening the envelope from Kerry. Here are some others: 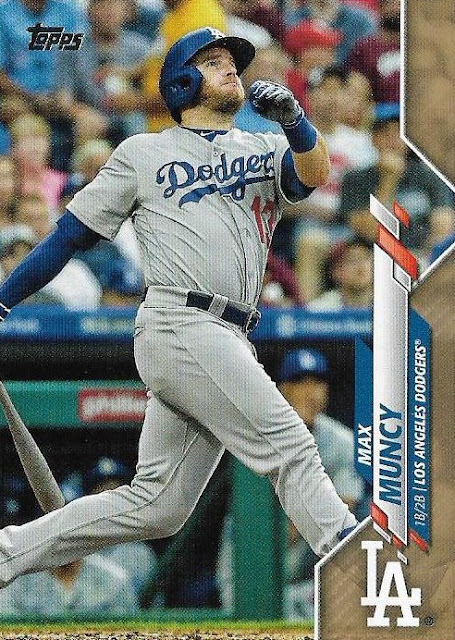 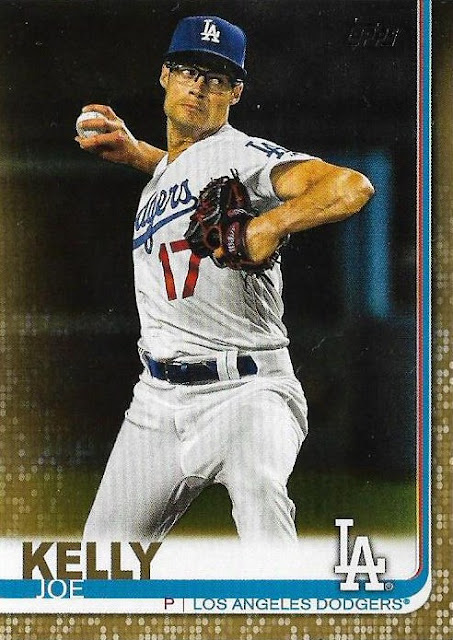 What passes for gold parallels these days. I don't think I want to see what Heritage looks like in 2068. Not that I'll have to worry as I'll be over 100 if medicine has advanced far enough and you know damn well baseball isn't even going to be a thing then. 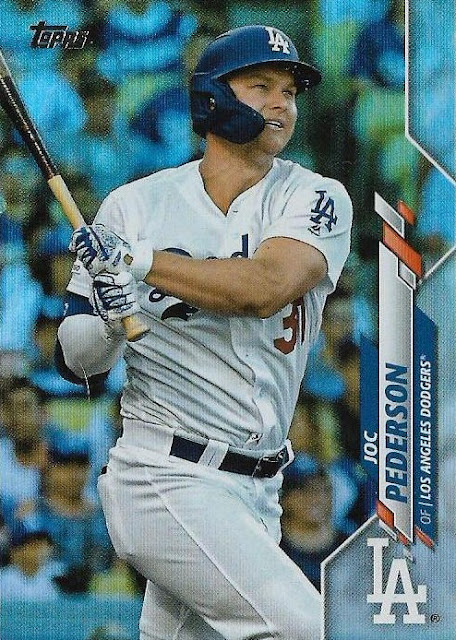 Closing out with a foil parallel. Bleh.

bbcardz said…
I like the look of those flagship foil parallels a lot. Topps seems to have somehow improved the snazziness of the foils in the last couple of years. I only started collecting Heritage in 2018 but I do like those different border colors. I think it's cool that one can embrace the traditional look or embrace the nontraditional look or embrace both. Or none (but where's the fun in that?).
March 14, 2020 at 10:12 PM

The colored parallels i this year's Flagship though make me wish that Topps had done that single edge in team colors for all the teams. The black Giants look great. I'm sure blue Dodgers would too. Definitely cuts down on the greyness of the cards otherwise.
March 14, 2020 at 11:06 PM

BaseSetCalling said…
There would be some easy, and obvious ways to make classy parallels of the '75 design. One would be to simply flip the 2 colors. A tasteful way to do it would be a lower print run in a color combo that closely matches the teams 2 primary colors, for each player. A regular card with one of the standard combos, and then a team color parallel.

There would also be a very, well, first-hit's-free-kid type way to do it - make it like a set of Topps Tek. And simply print every card in every color combo. Collect an entire set of one color combo. Collect a rainbow of a player. Collect a rainbow of a team. Or just collect a set of cards, randomly, and then no 2 sets alike. Don't like one combo? Don't collect it. But print all 18 combos in equal amounts. People would complain. Some people would melt-down completely about which color to collect. Other people would buy more cards than otherwise.
March 15, 2020 at 12:46 AM

Shlabotnik Report said…
BaseSetCalling has mentioned a fear of mine... that every 2024 Heritage card will be done in every possible 1975 color combination. Just the thought of this gives me agita.
March 15, 2020 at 8:50 AM

Nick said…
I feel like I should be against chroming/coloring up vintage borders...but I'm with you in that I actually kinda like it (in moderation). It's a weird, fascinating collision of old and new.
March 15, 2020 at 9:34 PM

Fuji said…
I'm torn between Topps releasing all of the psuedo-vintage stuff. I'm getting tired of them taking the easy way out... but on the other hand some of their new ideas are really, really boring.
March 15, 2020 at 11:03 PM