75 cards is not enough of a nudge (when it's Heritage) 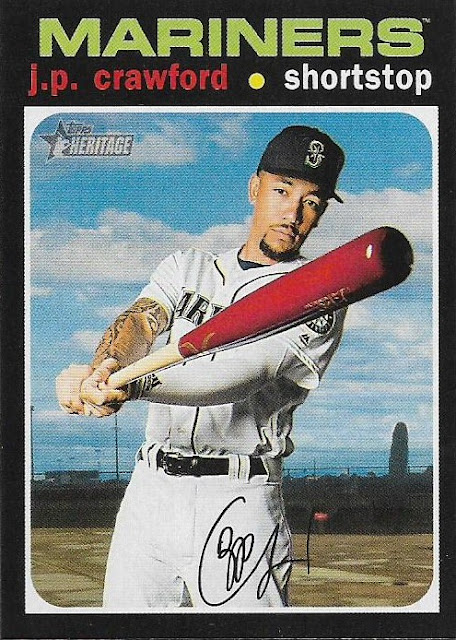 Recently I received a box of cards that Rod from Padrographs warned me was coming.

I knew it had something to do with 2020 Heritage, but I figured it was something Dodger-related.

It turns out it was set-related, as in a whole-bunch-of-the-set-related. 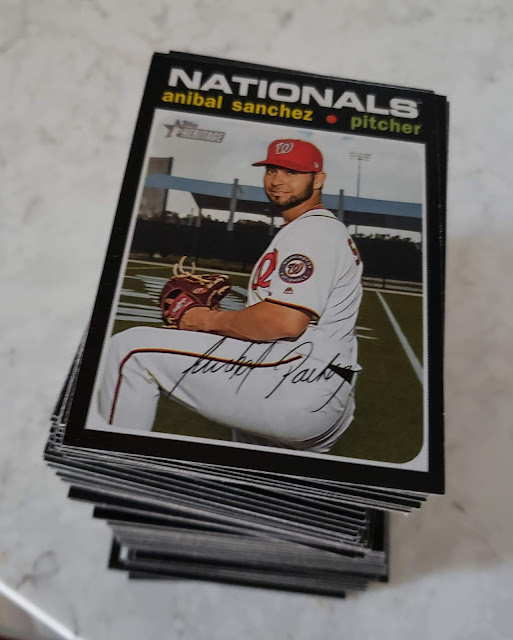 He sent a nice, healthy stack of 2020 Heritage, you know, in case I wanted to try to complete it.

Wait, that's not an accurate picture of how many cards he sent. Here you go: 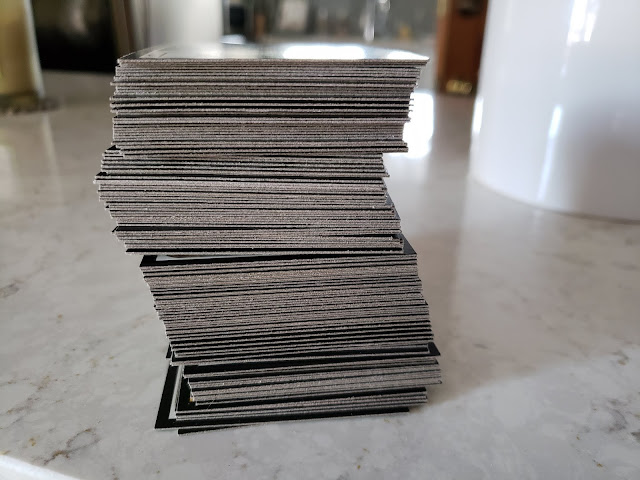 That's easily more 2020 Heritage than I had accumulated through a one-blaster purchase and a few pack purchases.

Out of the cards that Rod sent, 75 of them were new to me. Add those to what I had already accumulated and that's more than 200 cards from the set, quite the push not even a month into Heritage's release.

He even threw in a couple of high-number cards: 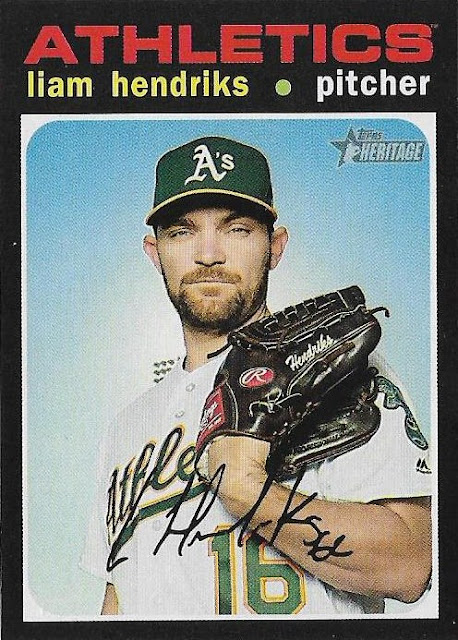 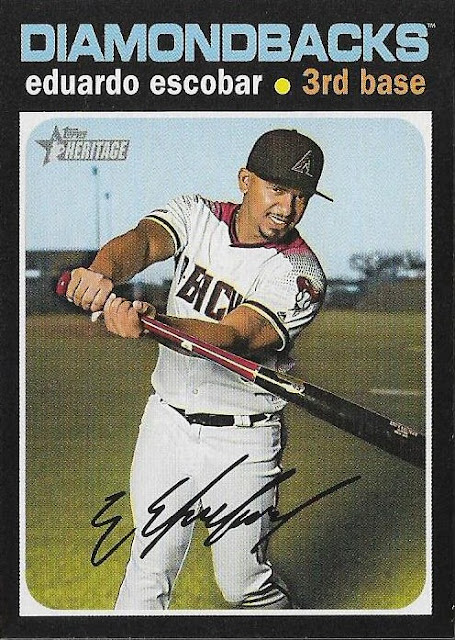 There was also the high-number Corey Seager card but that's already been squirreled away for my Dodger collection.

So with that kind of jump on a 500-card set, attempting to complete the whole thing is a little tempting.

This isn't the Heritage sets of the recent past in which I had little to no connection to the original sets to which Heritage was paying tribute. This is an ode to the '71 set, a set I remember seeing as a kid, pulling a ripped up, old Manny Mota card from the gutter. It is paying homage to a set for which I traded cards that were current at the time (1978 Topps) in order to get a few of those cool, black-bordered '71s from my friend's older brother's collection.

I wrote an entire blog about 1971 Topps, card-by-card. It will always be one of my all-time favorite sets.

But is it enough to try to complete the Heritage set?

Here is what I need from 2020 Heritage after Rod's very generous gift:

Although I could count on a number of fellow traders to get me those cards, that's still a decent chunk of cards to get, while I'm trying to collect other things that -- no offense, Heritage -- I like a lot more.

And here is the death knell for attempting to complete the set and any other Heritage set not named 2024 Heritage:

That want list doesn't include any of the 100 short-prints.

I have four of the 100 short-prints right now. Four. Someone with my budget and my card collecting interests would take at minimum 10 years to find all of those short-prints. And I'm not spending 10 years on a modern set. No way.

So there you are. If people want to send me cards off that list, great. I won't turn them away. They look like 1971 Topps, so they're going to be cool cards. But, more likely, I'll probably trade the cards to others who collect Heritage more seriously, like I've done with every other Heritage set of the last dozen years. 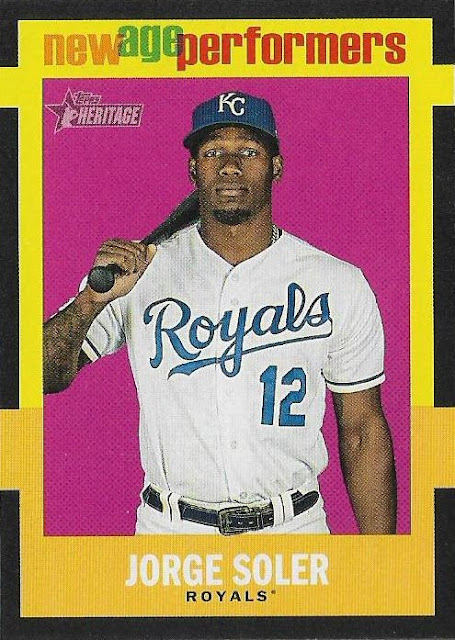 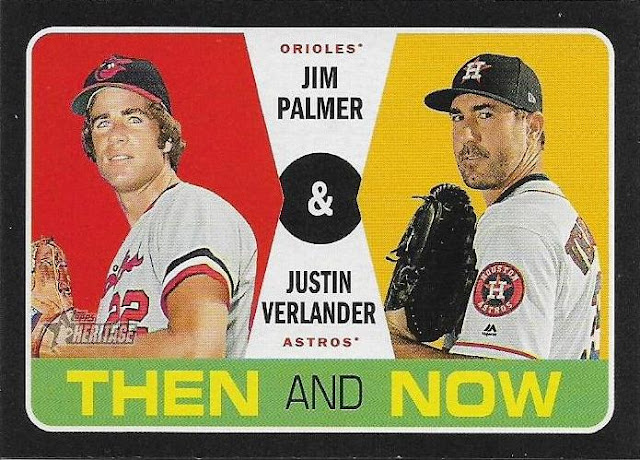 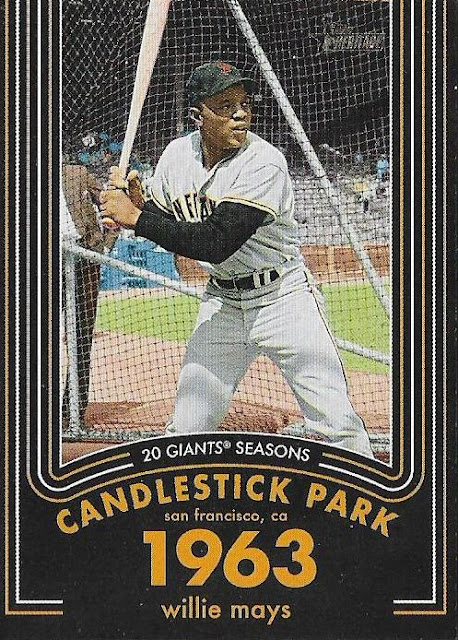 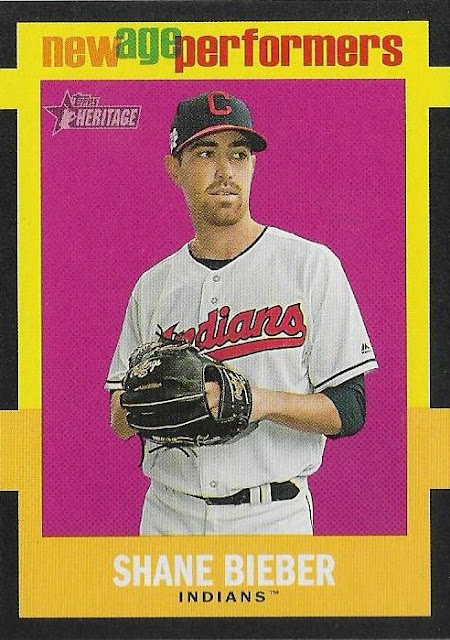 The inserts that I received will probably go to GCA at The Collective Mind, if he needs them, as I know he's looking to complete everything from the set. 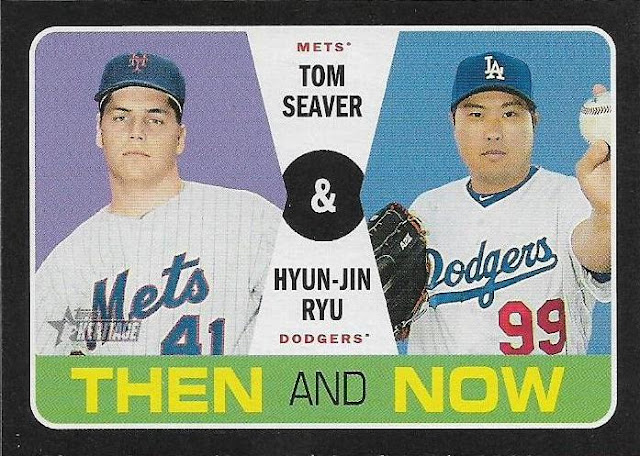 Except this card. This goes in the Dodger collection (interesting that Ryu has an insert in Heritage but not a base card).

But before I go, I went through the stack and found some cards in which Topps matched up the card numbers with the 1971 Topps counterparts. I'm still having fun with that, so let's see what I found. 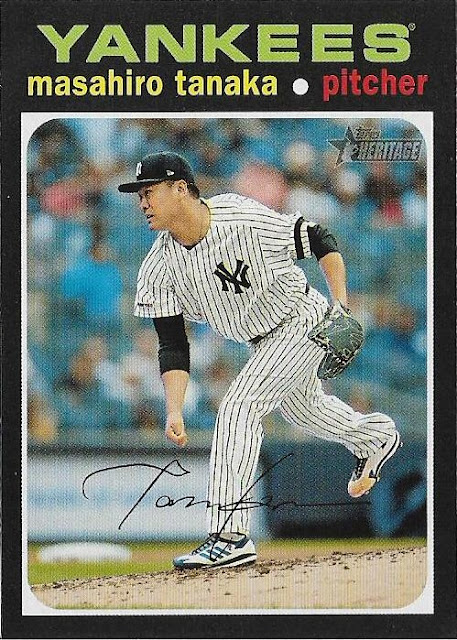 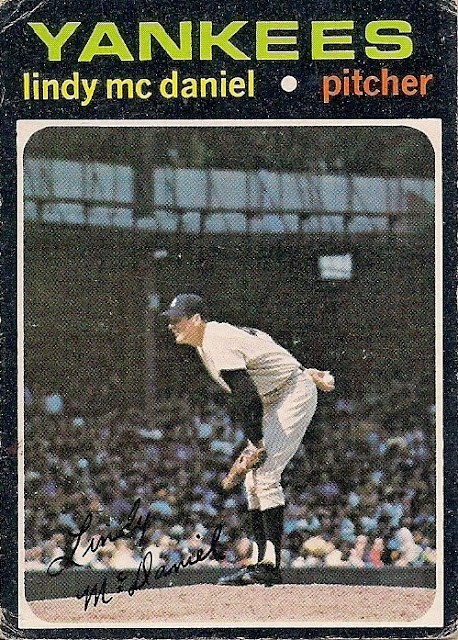 Masahiro Tanaka at #303 is matched up with Lindy McDaniel's #303 in the 1971 Topps set. To be honest, that's a tough assignment for Tanaka. McDaniel is a Cardboard Appreciation Hall of Famer for a reason, and Tanaka isn't pitching in old Yankee Stadium.

Nice effort but not nearly the same effect. 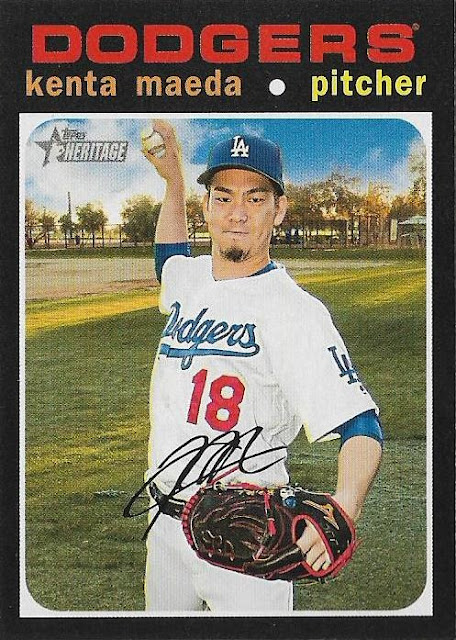 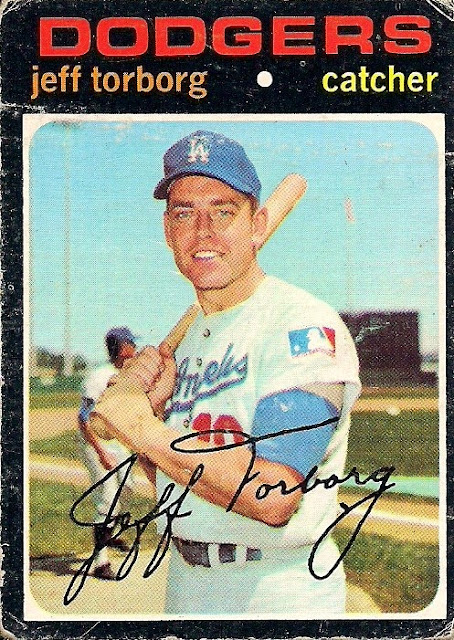 Kenta Maeda's 2020 Heritage card matches with Jeff Torborg's 1971 Topps card at card #314. Outside of them both being Dodgers and parts of batteries, I can't think of any other connection between the two. 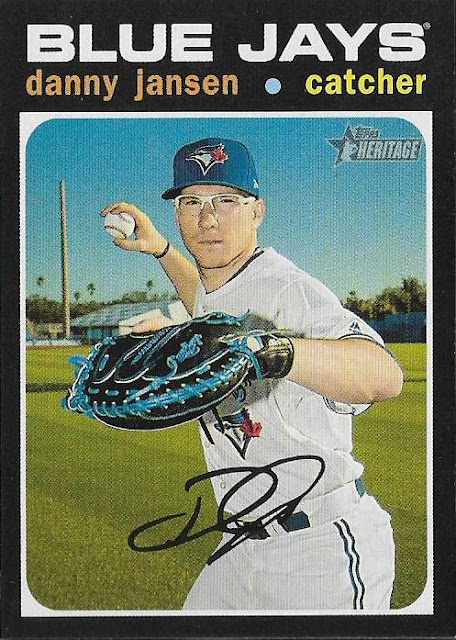 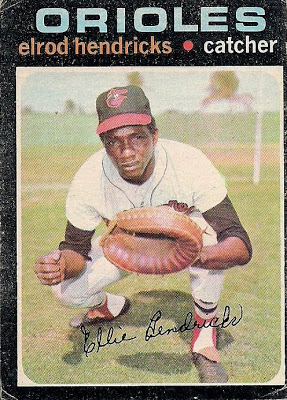 Danny Jansen's catcher's pose on card No. 219 on Heritage is connected to Elrod Hendricks' catching pose on No. 219 in 1971 Topps. 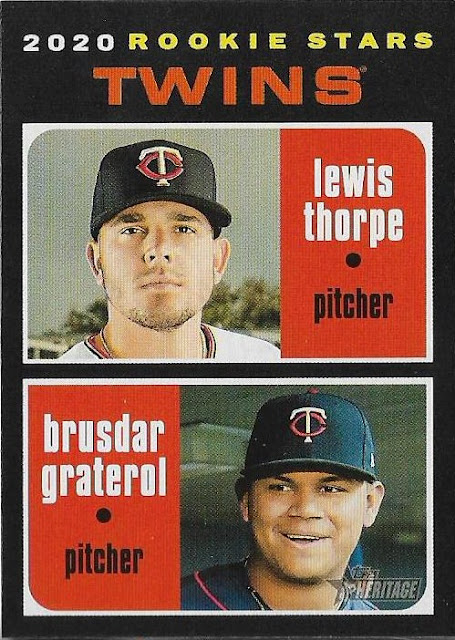 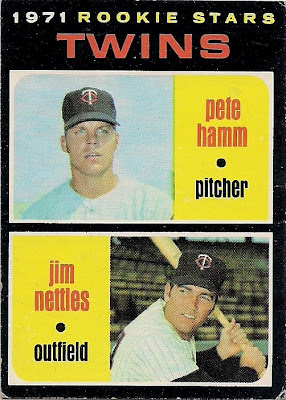 These are the two cards that wear No. 74 on the back of their cards. Too bad that Heritage couldn't replicate those yellow boxes on the '71 card. Now that Graterol is on the Dodgers, I'm hoping he performs better than Pete Hamm and Jim Nettles. 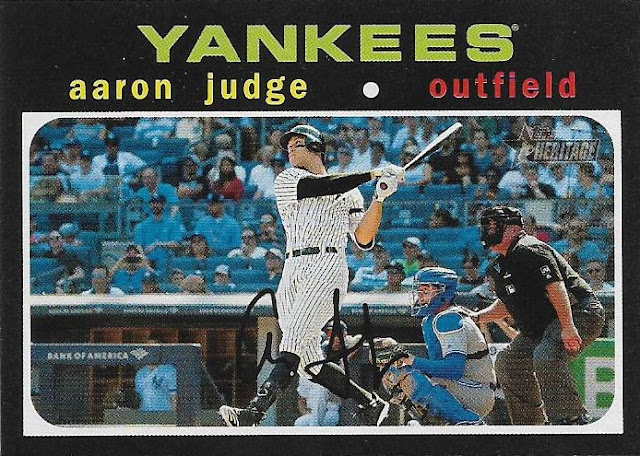 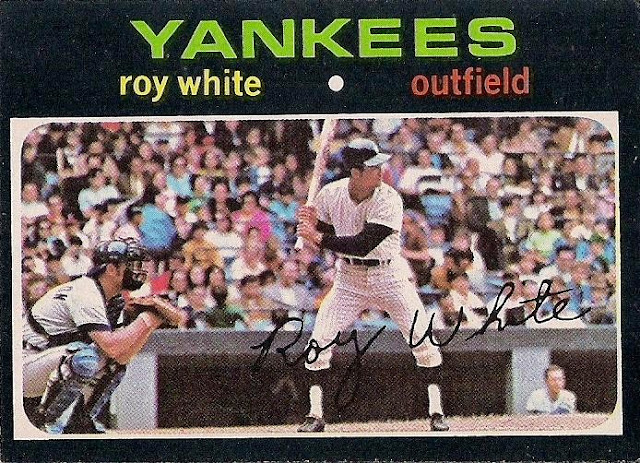 Card No. 395 on both Heritage and '71 Topps show two of the more likeable Yankees players in history. My OCD wishes Judge and White were facing the same way but still a good look. Lot more fans in the stands at White's game, it appears. 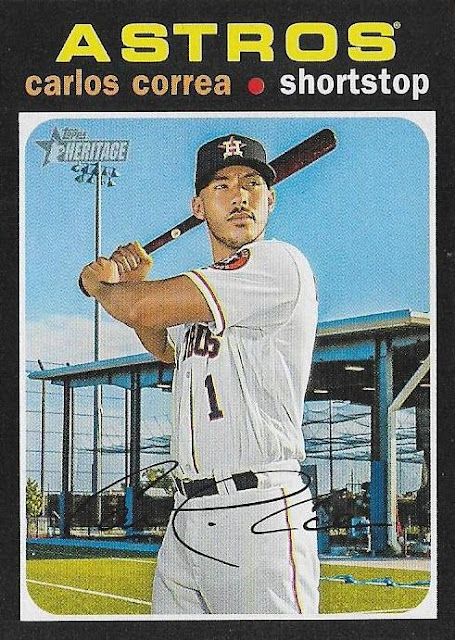 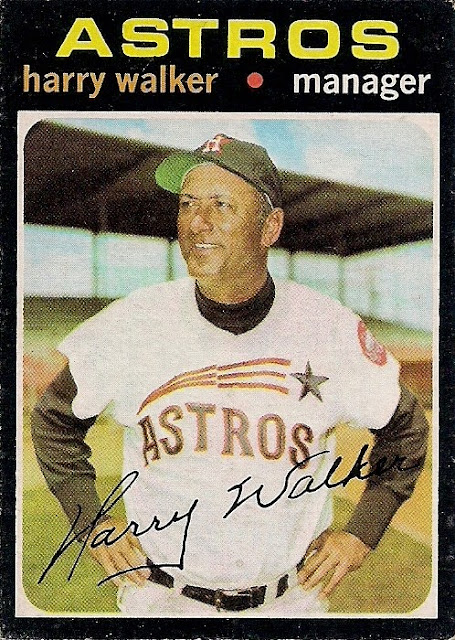 Carlos Correa is paired up with a manager on card No. 312, which is a bit odd. Somewhat similar backgrounds. 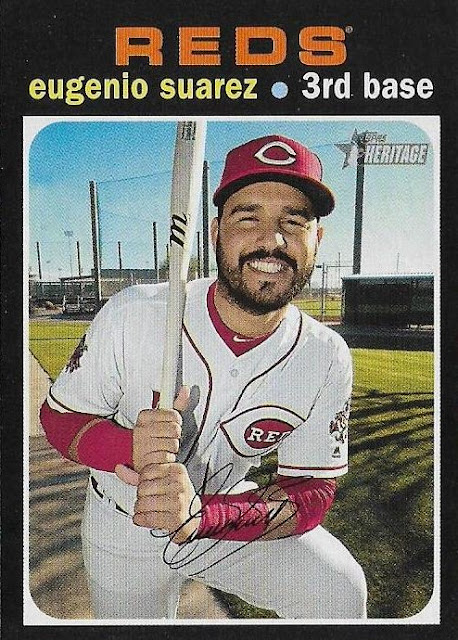 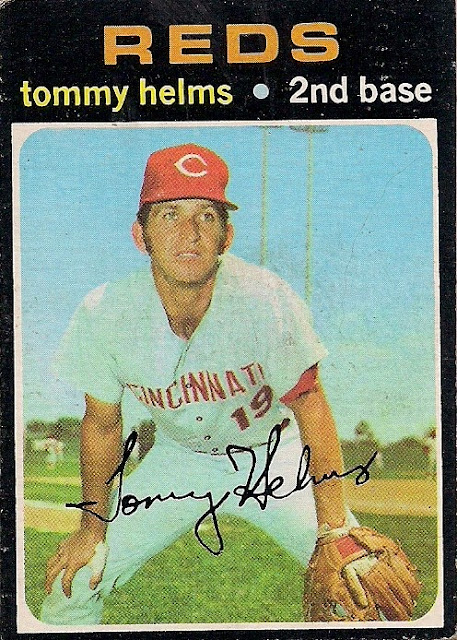 Both appear at card No. 272. Tommy Helms wishes he hit 49 home runs in a season.


So, pretty nice of Rod to send those my way. I do appreciate it and, like I said, one of the coolest-looking tribute sets ever.

It's too bad Topps makes it virtually impossible to collect the brand.

Rod (Padrographs) said…
i bought too much and knew you liked them. Target is the only card shop anywhere near me and I hadn't bought anything for awhile. Enjoy trading them.
March 24, 2020 at 10:06 PM

Nick Vossbrink said…
Oh man I keep forgetting about Pete Hamm. I need to make a 1978-style custom of him.

Sean said…
"Someone with my budget and my card collecting interests would take at minimum 10 years to find all of those short-prints. And I'm not spending 10 years on a modern set."

I think this sums up my views on modern card-collecting - it's just too much. Who could ever complete a set? Or if you do, you have to add, "It's just the base set, or the base cards, not the short-prints." My sons aren't even interested in what we call 'regular' cards. If it's not a short-print, an auto, a relic, they're not much interested.

Also, thanks for writing about card collecting and not the virus thing. You could dub this a "coronavirus-free zone"!
March 25, 2020 at 11:03 AM

RunForeKelloggs said…
I'm not collecting them either. I do like the comparisons with the 1971s. Helms need his MLB and minor league career to surpass 49 homers.
March 25, 2020 at 1:55 PM