Getting more obsessive about an obsessive project 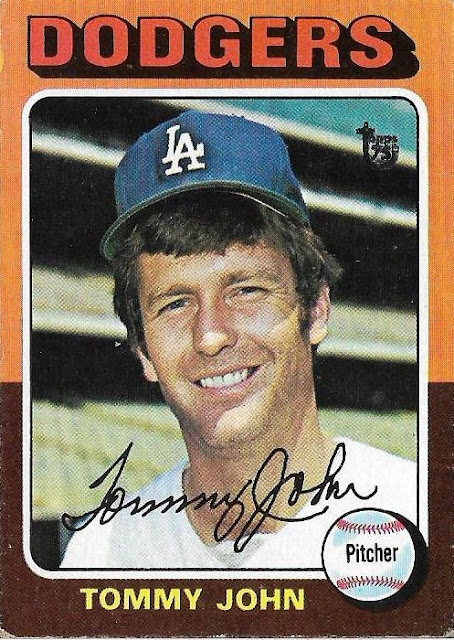 This is the most recent 1975 Topps buyback to land in my collection.

It came from Sportlots, which I find myself frequenting a little more often. The Tommy John card is a pretty good get in this buyback completion attempt, seeing as players whose legacy has lasted beyond their career are kind of difficult to find as far as '75 buybacks go. But more on that later. 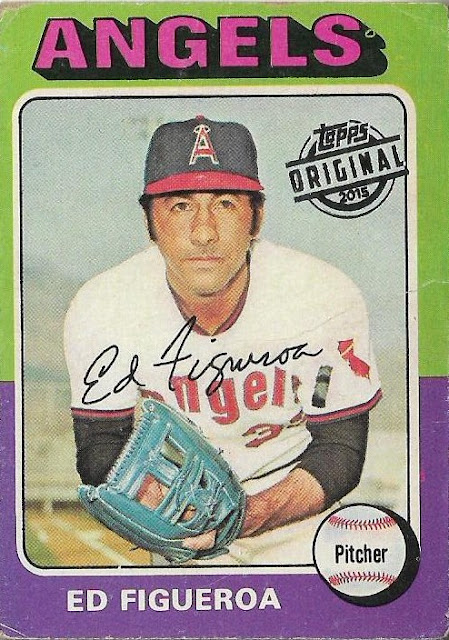 This was the most recent '75 buyback in my collection before Tommy arrived. It came from Bob of the best bubble and is another notable card most welcome in my ridiculous quest.

My first attempt was a bit scattershot. I didn't go too much in depth or exhaust all of the online channels. With this more recent attempt, I tried to be a little more thorough, although I still have some work to do.

I looked on COMC, ebay, Sportlots and Trading Card Database to see what existed for '75 buybacks for 292 cards that I have not obtained. I checked the available inventory. I checked cards that were sold out. I checked completed listings. I checked what was scanned on TCDB. (I wanted to do the same for Beckett Marketplace and Just Commons, but I don't have a handle on how to search on those).

Here is a sample: 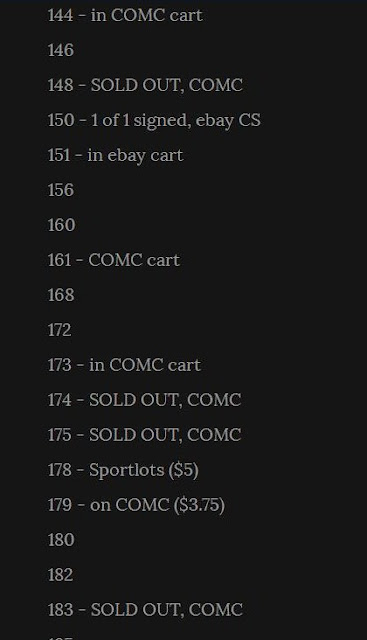 For all of the cards I don't have, I marked the ones for which I was able to find a card, that is either already in one of my online carts or is for sale or is sold out. I even noted super scare ones, like that Bob Gibson signed 1 of 1 that I will never track down.

The numbers with nothing next to them are cards with no evidence of a buyback. That doesn't mean there isn't one. For example, the last time I did this, I found a '75 Carl Yastrzemski buyback. I didn't find that this time. But this is why I will continue to check all the online sites for the '75 BBs, because you never know.

I'm going to repeat myself from the last post just because I found the same cases during this bit of research.

-- There are very few superstars in buyback form. Still haven't found a Rose or Bench or Reggie Jackson. But I did find a Rod Carew and Nolan Ryan.

-- Still haven't found one of the Rookie Prospects cards in buyback form. Seems that Topps finds the rookies too valuable to stamp, knowing that they'll go for high prices regardless. Wish everyone felt the same way about every card so we wouldn't see dumb stamps on cards, but this is the game we're currently playing.

-- Team cards are rare in stamped form but do exist. I have several of them, the Phillies, Cubs, Braves, Twins, Astros off the top of my head. But I didn't find much more than that.

-- Rookie cup players aren't around in stamped form much either. No buyback Hargrove or Madlock or even Larry Milbourne.

-- Not a single checklist stamped. I have seen checklist buybacks from other sets, but not this one.

-- Limited MVP subset cards, although since I wrote the previous post, I've acquired three from that subset so a few are around anyway.

-- I also noted a lack of buybacks for players who found fame later on, whether as a manager or a broadcaster, etc. Players like Dusty Baker, Cecil Cooper and Tim McCarver. Same goes for cult favorites like Herb Washington.

With my updated research, I was able to account for more '75 buybacks than the last time. I approximated about 440 cards in buyback form in the '75 set last time. I'm pleased to say that this time I've accounted for 508 total.

And I have hope that there are even more. While I understand why I was not able to find a Jim Palmer or Tom Seaver or Tony Perez in buyback form, some of the missing players are just ridiculous.

As many times as I saw buybacks for Pepe Frias and Mike Lum and Ken Boswell over and over, there's got to be buybacks for some of those other lesser known guys, right?

So, anyway, I remain undeterred. I have enough '75 buybacks in shopping carts to get me through the next months and probably the next couple of years. Before I know it, the 2024 baseball card season will be here and you know Topps Heritage will be putting out a bunch of '75 buybacks in its set that year (unfortunately several will be signed and exclusive).

This exercise made me feel like I accomplished something -- as research often does -- even if it's a highly unrealistic exercise. But where would collecting be without hope?

Anyway, here are a few other cards that Bob sent to go with the Figueroa buyback: 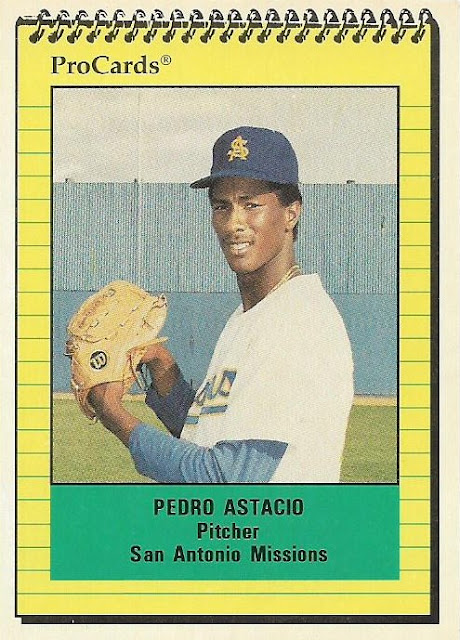 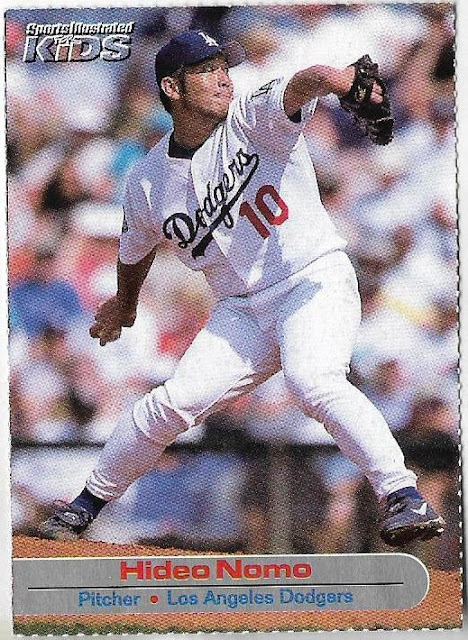 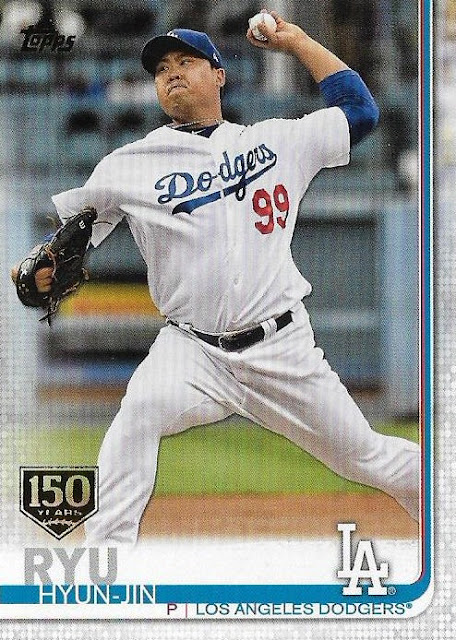 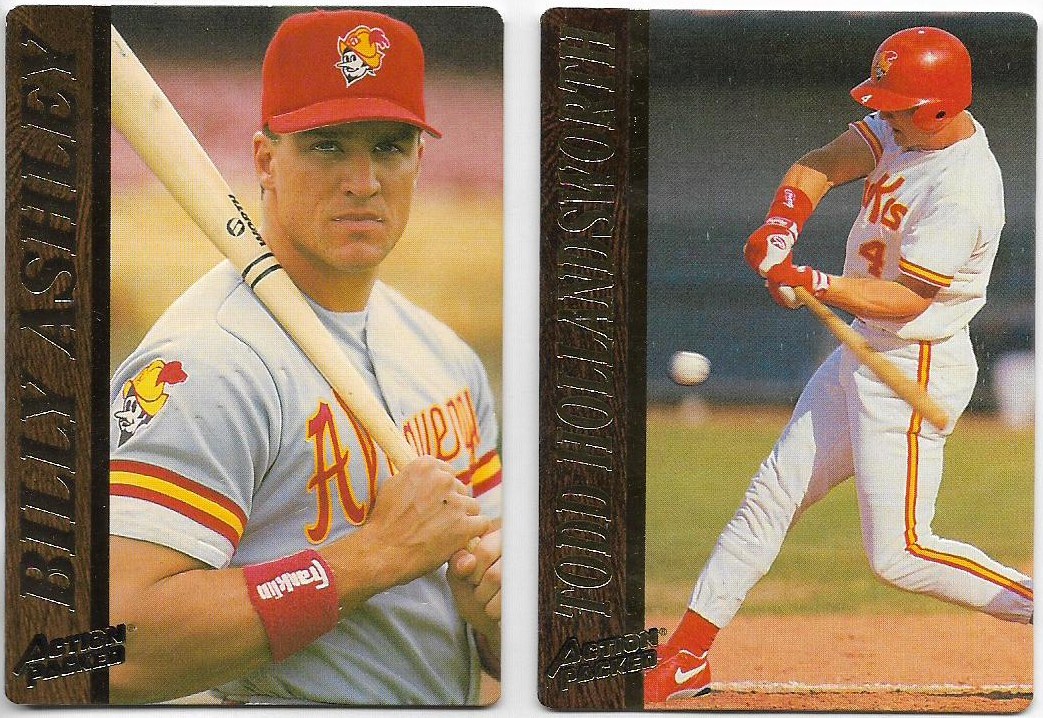 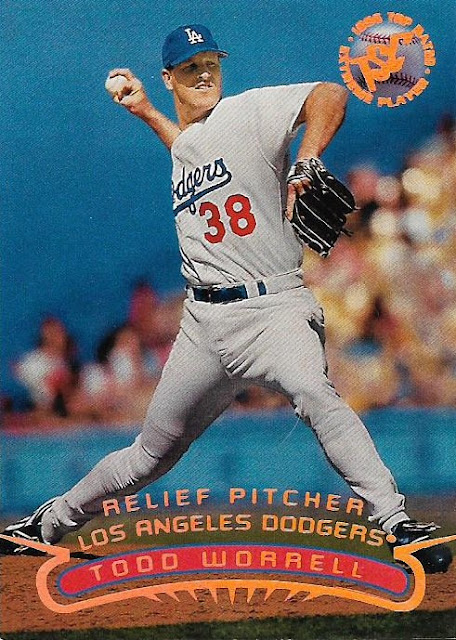 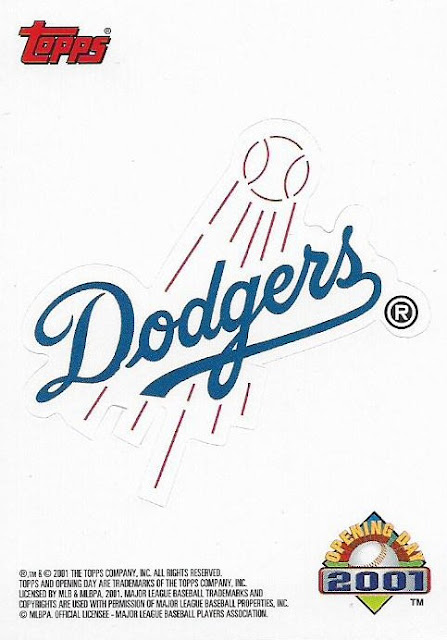 The bottom item is actually logo sticker from Topps 2001 Opening Day. How very Fleer of you, Topps.

I'm quite pleased to have that SI for Kids Nomo. Some of those flimsy, perforated things are difficult to find.

All right, I think I've spent plenty of time on the hobby the last 24 hours. Time to give it a rest.

Base Card Hero said…
That is some serious research! I really want to see you complete this set. Which makes me wonder... has anyone completed a buyback set yet?
March 11, 2020 at 9:02 PM

shoeboxlegends said…
Great post! I'm glad there's at least one other collector out there who's as obsessive about a buyback quest as I am. I'm doing similar tracking for the 1990 Topps set that I'm trying to build in buyback format. Like you, I'm fairly convinced that there are a number of cards from the set that simply don't exist in buyback format.

Fuji said…
You're always one step ahead buddy. As I was reading the post... it hit me that Heritage would eventually reach the 1975 set... which would probably help your cause. Then low and behold two paragraphs later yo mentioned it. Anyways... between all of us looking out for you, 2024 will hopefully put a pretty decent dent in your build.
March 13, 2020 at 12:19 AM