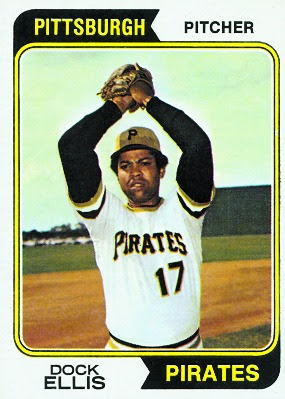 Yesterday, Ryan from Beckett Media announced the old-school Topps designs chosen for this year's Archives set, which will be released in the summer.

The three designs selected for 2020 Archives are:

I don't think I'm saying anything controversial when I state that these are not three of the more popular Topps designs. In fact, with many collectors, these are three stinkers.

But I'm not one of those collectors. Two stinkers? Sure. But three, well that would mean you're underestimating 1974 Topps for about the bamillionth time.

I love the 1974 set. If you've been paying attention to this blog at all, you know that. I've written several odes, including this most recent one that I'm going to tell myself caused Topps to run back into its work office and exclaim "WE HAVE GOT TO PUT THE '74 DESIGN IN ARCHIVES NEXT YEAR!!!" 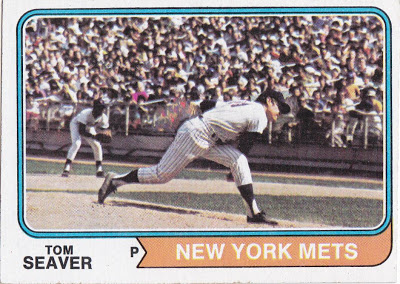 Topps, whether it's been Archives or with any of its old-design tributes, has neglected the '74 design something awful. No, not as much as it's neglected the '78 design, but I'm not going to complain about that now when '74 is finally getting some respect.

Now, as far as the other designs, they're not going to get me to buy Archives. 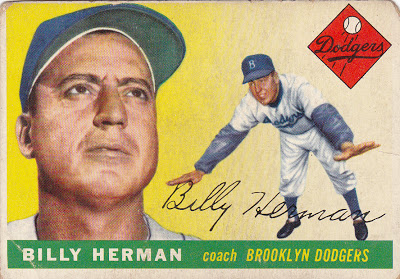 The only 1955 Topps cards that have found their way into my collection have been Dodgers. I own no other '55 Topps. I once was gifted a Warren Spahn from '55 and I traded it away. I once pulled a '55 Frank Baumholtz out of a vending machine at a card show and I traded it away.

To me, the '55 set and the design wasa trial run for the greatness of 1956, and I don't see modern players improving on the look of that set in Archives.

Plus one-third of the set is going to be horizontal and I know that's going to annoy some collectors (personally I don't care). 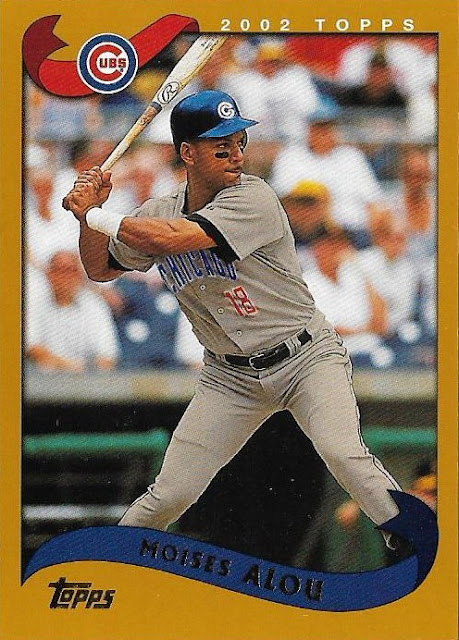 I already feel sorry for the players that will appear on the 2002 design in Archives this year.

The brown mustard design is so unappealing that I have somehow managed to accumulate only ... let me see here ... nine ... cards from the set.

That doesn't include the Dodgers, for which I have the entire 2002 set because design doesn't matter with the Dodgers, it's all just mindless accumulation. See blue, see interlocking L and A, collect.

The 2002 set is so meaningless to me that I have referenced it six times, as far as I can tell, on this blog. That is just about rock bottom when adding up how often I've written about past Topps sets.

I do admire the risk taken with using '02 instead of '03 or '97 or something a bit more pleasing and modern. This also marks the first time Archives has used a Topps design from this century so that's got to count for something.

The best part of selecting these three designs is that no matter which design that Clayton Kershaw appears on, it will be a new addition to my Through The Years collection as I try to accumulate Kershaw on every Topps flagship design.

So, there you go, Topps listening to me again!

But anyway, it looks like when Archives comes around, I'll be collecting just one-third of the set again. 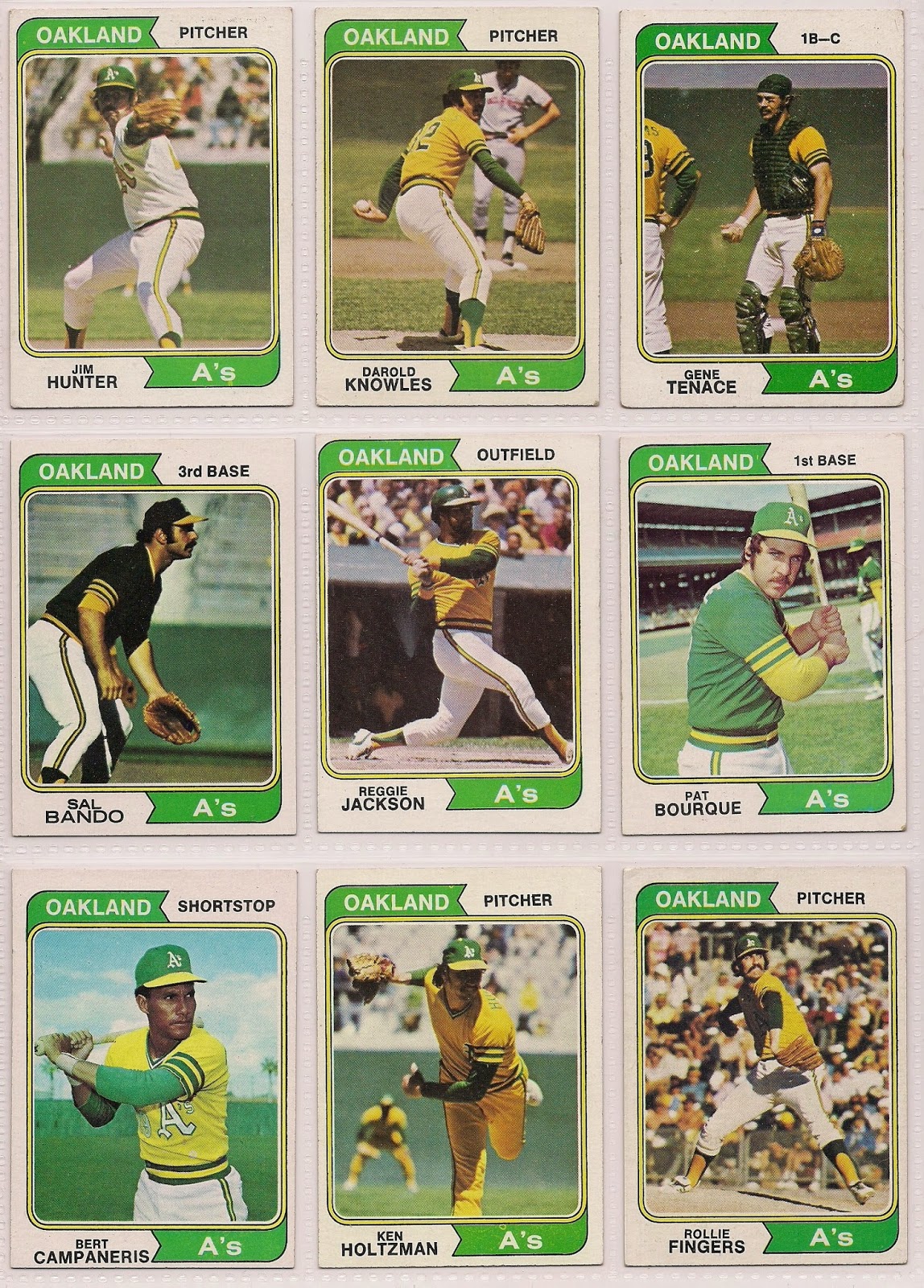 I mean look at that!

GOGOSOX60 said…
After a false start og buying 1972 baseball cards and then shoving them a box only to be thrown out, 1974 was also my first year of buying those 10 cents packs all spring and summer and yes I have them all to this day including an unopened box!!!

Beside this set gave me the history of Hank Aaron cards I never saw.
Hey TOPPS don't forget the red team checklist cards as an insert!!
March 25, 2020 at 9:01 PM

Fuji said…
There is so much to love about the 1974 Topps set. Awesome action shots... including the Fingers you showed off. I also love the Hank Aaron Special, all-star, league leaders, and playoff subsets. The 1955 set isn't my favorite, but it's not terrible either. As for the 2002 design... that would be my least favorite of the trio. I stopped collecting in 2001, so I never bought any 2002. And when I returned to the hobby... there were plenty of other cool sets I missed to chase instead of those gold bordered cards.
March 25, 2020 at 10:29 PM

Brett Alan said…
I quite like the '74 set. I'm only surprised that they're doing it when it's third in line for Heritage. That's got to be the closest they've done Heritage and Archives of the same main design. Good call Jim on the Washington "Nat'l League" cards--wonder if we'll get some sort of tribute to that, or they'll save that for Heritage. Also, this is going to REALLY call attention to the fact that the Angels don't have a city name anymore, unless they completely leave the Angels out of the '74 portion.

I'm very surprised that they're jumping all the way to 2002. I don't have a problem with the design; I don't have many cards from it, either, but that's mostly because I wasn't collecting them and they're not all over the place like junk wax is. What does jump out at me is that 1974 and 2002 are actually a bit similar, with one pennant tail in the upper left and another in the lower right.

The 1955 adds more variety. I don't tend to love horizontal cards, but I like them better when the whole set is that way (and, yeah, that the whole 1955 portion will be that way works). So overall I'm fine with this.

I'd still like to see them do an early Stadium Club design for Archives, and have some fun with the rookie cards on the back.
March 25, 2020 at 11:07 PM

kcjays said…
Brown mustard? I always thought it was pumpkin. Maybe I'll be lucky and there will only be a single Royals players in the 2002 group.

Old Cards said…
I like the 1974 set as well. Unlike you, I was winding down my card collecting days. 1975 was actually the last set I collected, before I jumped back in a few years ago. The A's set you show is actually the first page in my binder. Thanks for highlighting one of the better sets.
March 26, 2020 at 8:19 AM

Fuji said…
Jim from Downingtown - I can't believe I forgot to mention those San Diego/Washington variations. Good call.
March 26, 2020 at 11:00 AM

NPB Card Guy said…
It's probably not a coincidence that I stopped collecting MLB cards in 2002 and concentrated exclusively on Japanese cards.
March 26, 2020 at 8:53 PM

Nick Vossbrink said…
Really feel like Topps missed the boat by not doing 74, 80, and 02 together since those three are basically the same design.

Yeah 2002 is ugly but it's solely because of that awful border color. With a white border it's super nice.