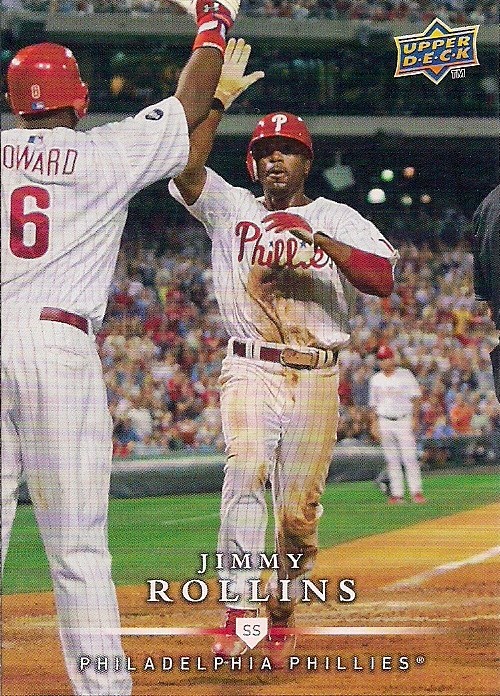 If you think you've already seen this night card featured on Awesome Night Card, then you are very perceptive ... and probably need a life.

The card that was featured then was the 2008 Upper Deck base card. This is the Jimmy Rollins card from '08 Upper Deck First Edition.

I am showing this card because, of course, Rollins is now a Los Angeles Dodger. In a convoluted scheme involving the Phillies, Marlins, Padres and Angels, the Dodgers landed a new shortstop (Rollins), second baseman (Howie Kendrick), catcher (Yasmani Grandal) and assorted prospects that they either kept or distributed to other teams.

The Dodgers also added some pitchers and a couple of other guys since the 2014 season ended. What I usually like to do during the offseason after my team's made new acquisitions is to see what cards I have of the Dodgers' new guys.

Because I'm not a player collector, I don't pay much attention to a player's cards if they're not a Dodger. I accumulate them only through set-building or my habit of buying random packs for reasons that are only known to my psychiatrist.

So it's interesting to see what cards I have of these guys just lying around the house.

I'll start with the players who are just beginning and then build to the more established. 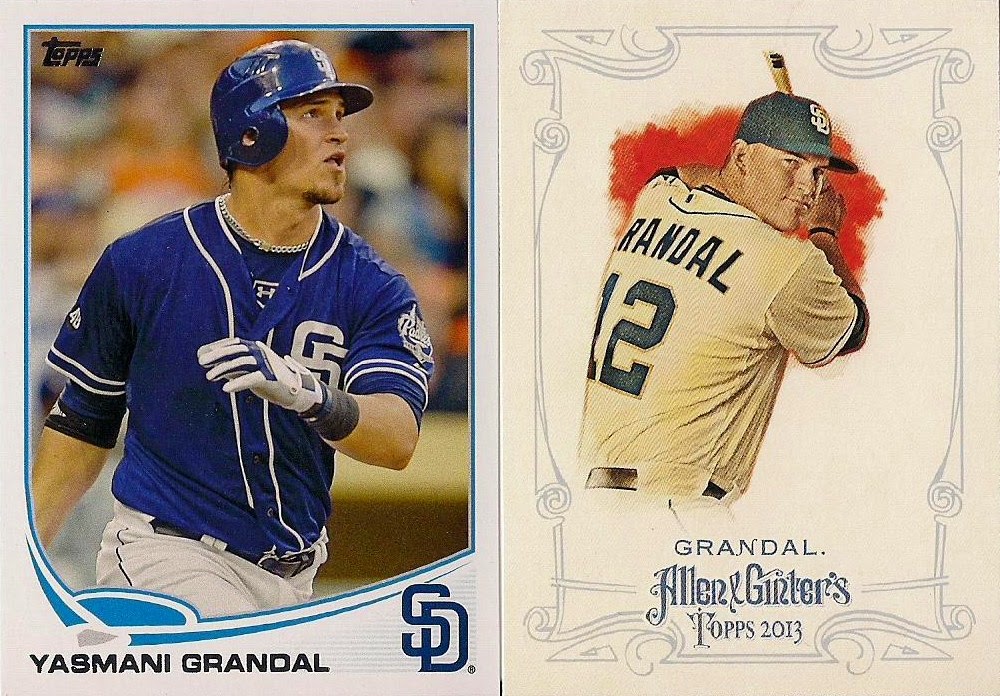 Number of cards I have: 2
What I knew about the guy before he became a Dodger: He was a PED user.
How I hope he helps my team: I like my catchers to hit. This isn't the 1970s. You can't put Steve Swisher back there anymore.

Cardboard claim to fame: I have only two cards of him so his fame is yet to be established as far I'm concerned. 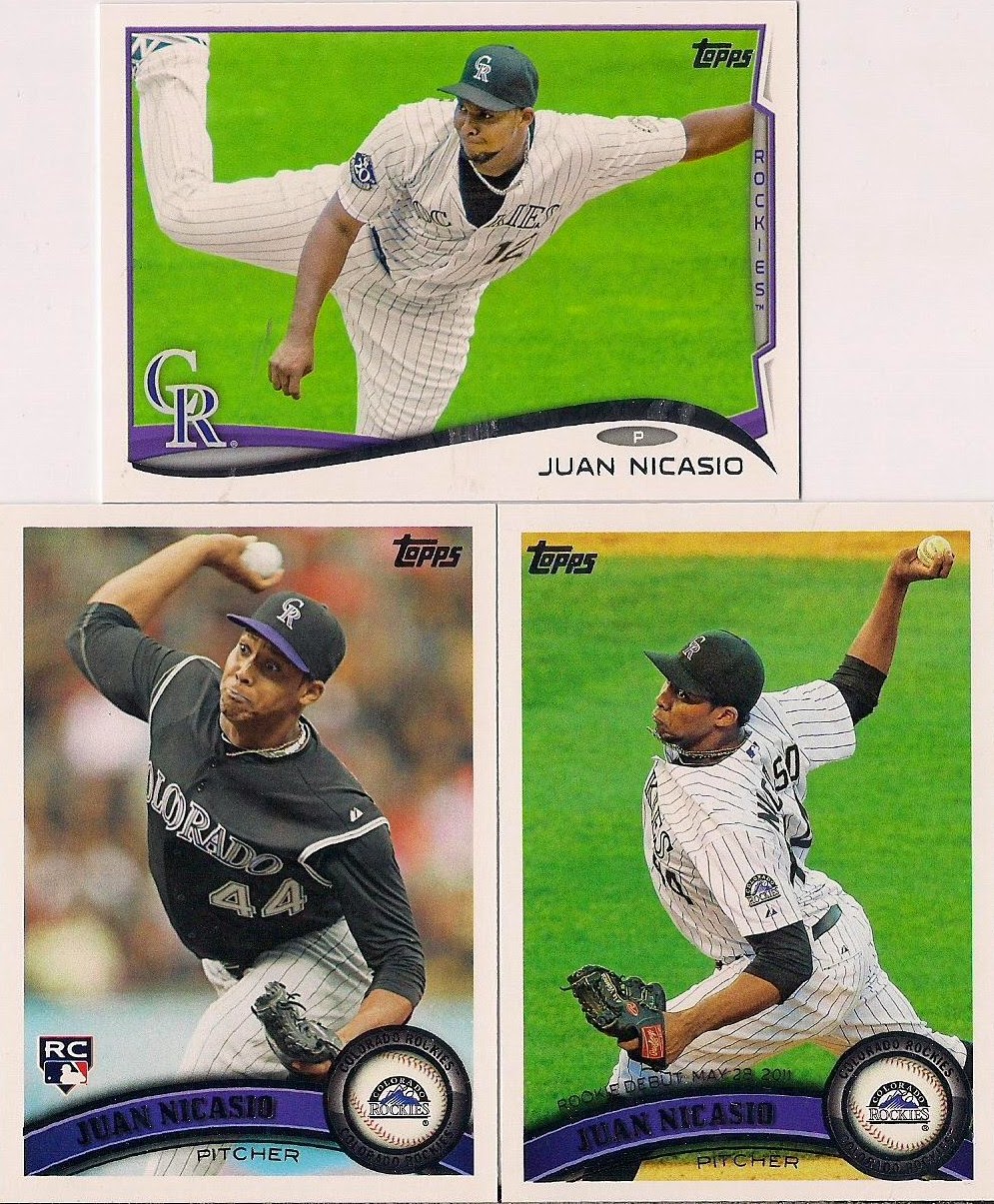 Number of cards I have: three
What I knew about the guy before he became a Dodger: Nothing.
How I hope he helps my team: Well, the bullpen was a disaster last year. Anyone new is better than what was there.

Cardboard claim to fame: He has two cards in the 2011 Topps Traded set, which isn't all that notable because that's what Topps does with rookies these days. But five years from now someone is going to want a full accounting of why in the hell Topps put two Juan Nicasio cards in one set.

Number of cards I have: three
What I knew about the guy before he became a Dodger: Nothing. I've had this terrible habit of not paying attention to the Reds ever since they left the NL West.
How I hope he helps my team: I'm assuming he's some sort of replacement for Andre Ethier or intended as insurance for Joc Pederson, Andre Ethier, Carl Crawford, etc.

Cardboard claim to fame: Nothing that I know. 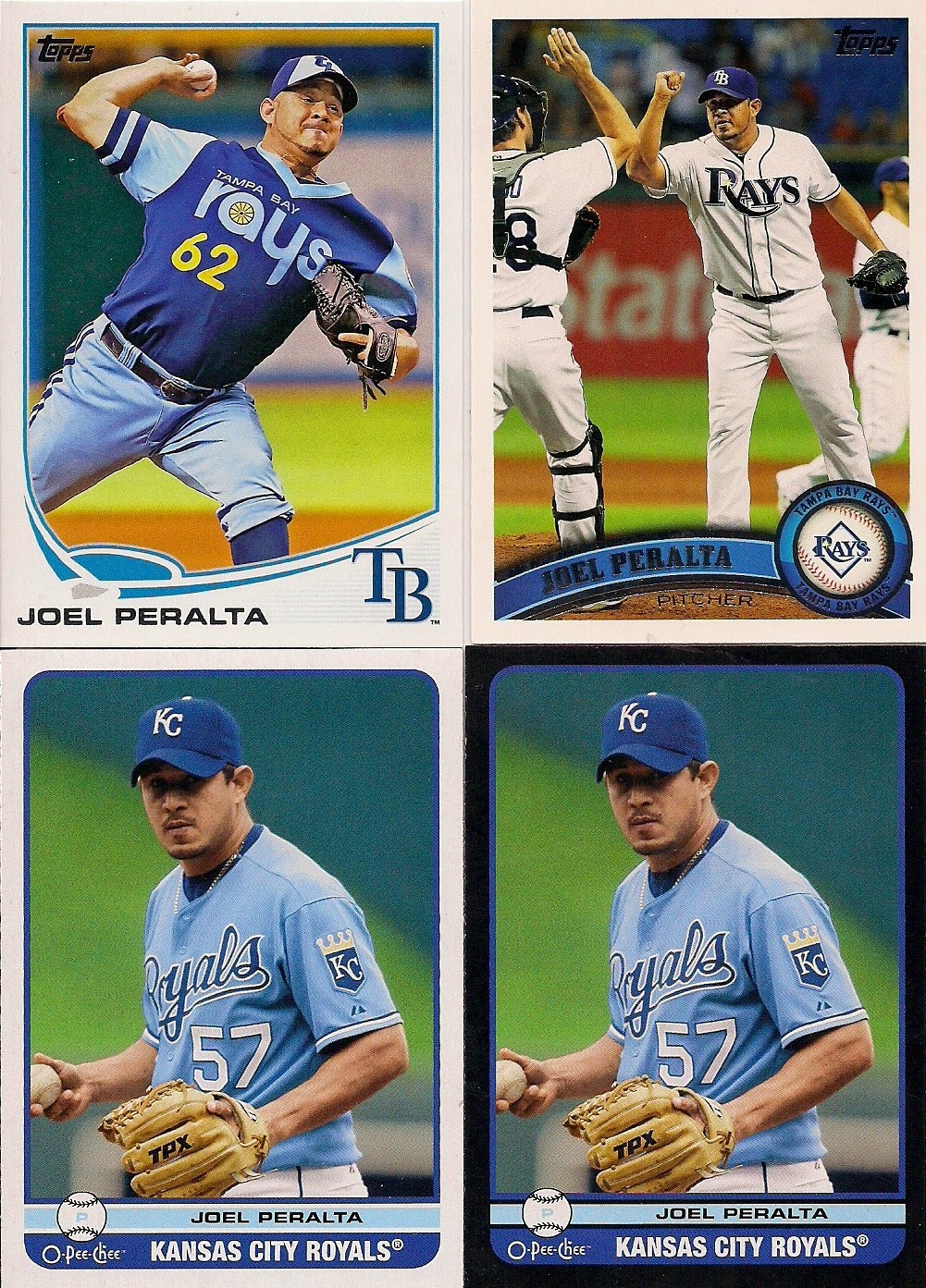 Number of cards I have: five
What I knew about the guy before he became a Dodger: I know him from the Rays and wearing that goofy 1970s San Diego Padres tribute uniform on his 2013 Topps card.
How I hope he helps my team: See what I wrote for Juan Nicasio.
Cardboard claim to fame: His 2013 Topps card.

My favorite card of his: 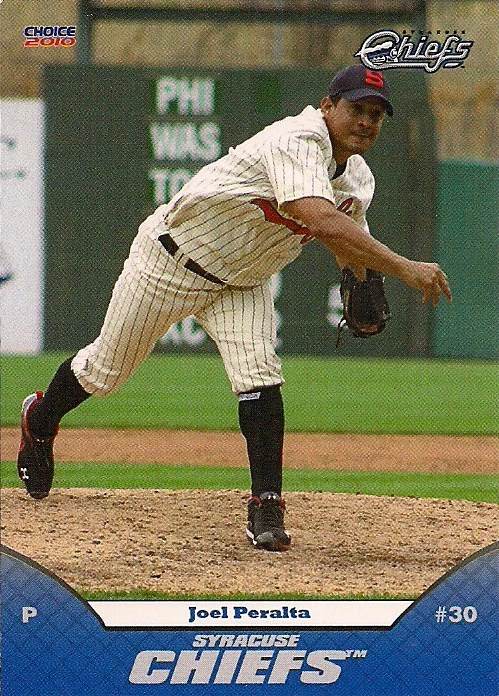 I have a card of him as a Syracuse Chief. 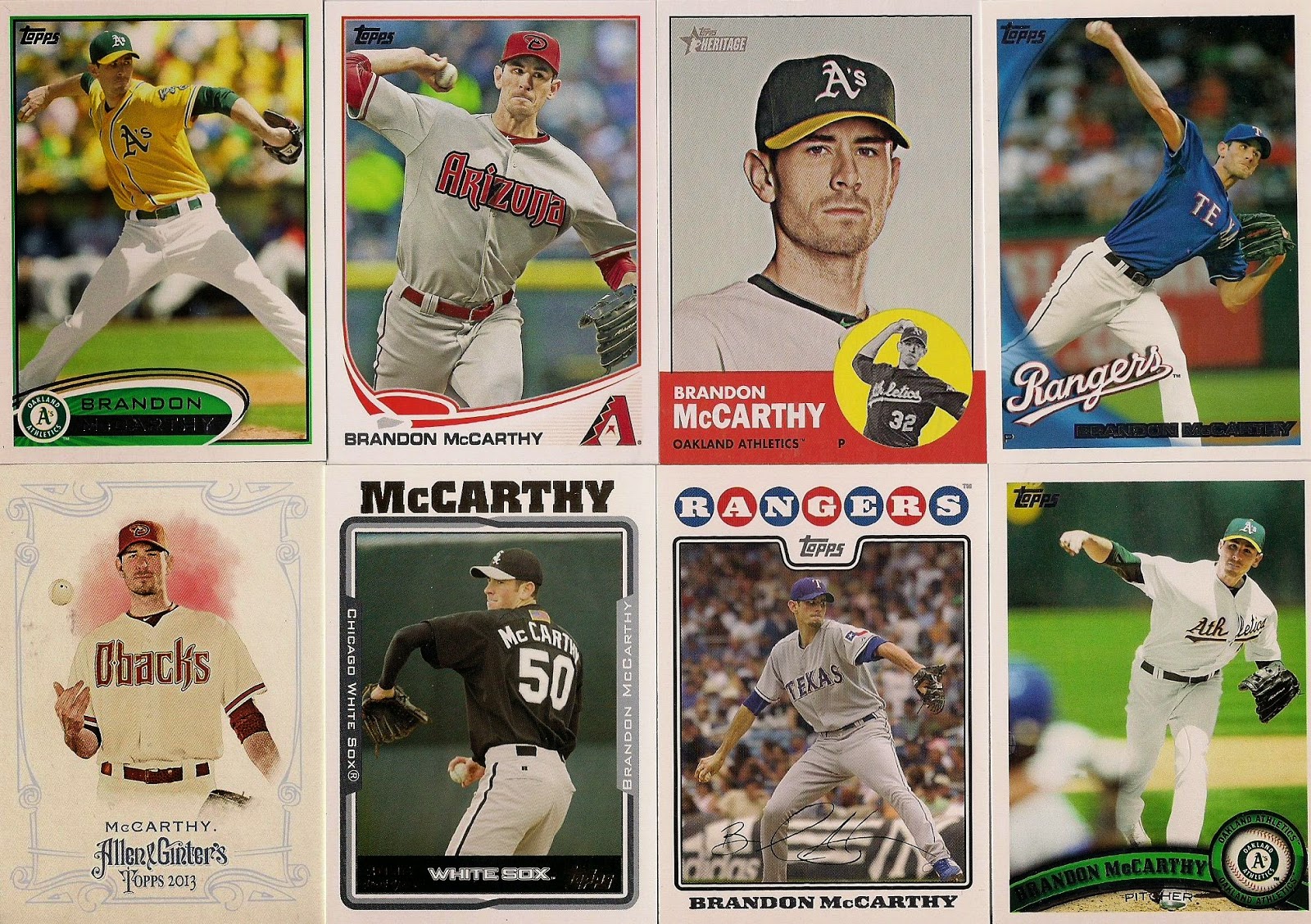 Number of cards I have: nine
What I knew about the guy before he became a Dodger: Switched teams a lot, recently played for teams I hate (Diamondbacks, Yankees), rampant Twitterer.
How I hope he helps my team: If he can pitch better than Dan Haren, then we're good.
Cardboard claim to fame: He is the last card in the 2010 Topps set (top card on the right). 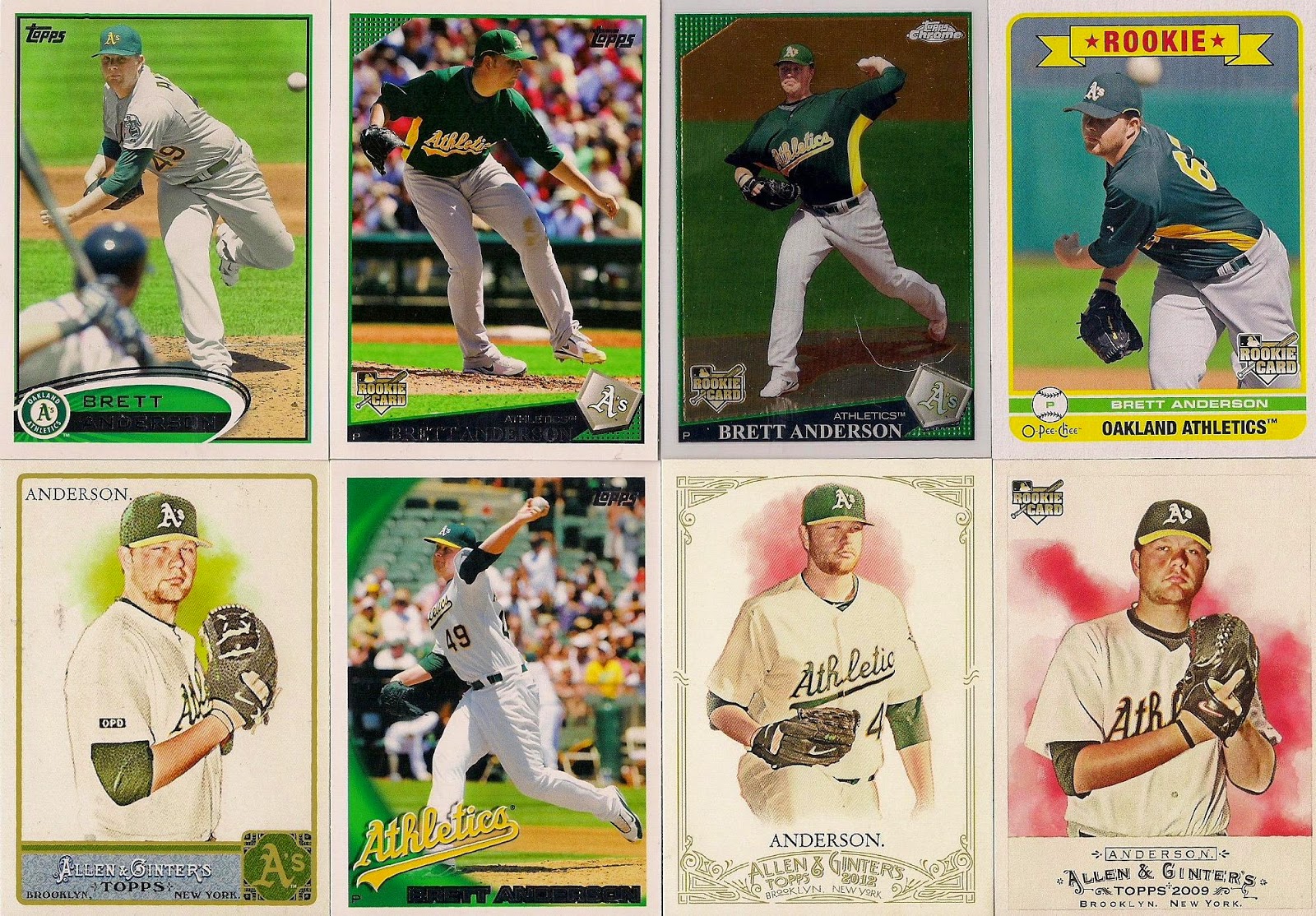 Number of cards I have: 14
What I knew about the guy before he became a Dodger: I can't get rid of his cards because he's an Oakland A.
How I hope he helps my team: I guess the deal isn't official yet, but again, I'm just looking for something better than Haren.
Cardboard claim to fame: Shows ability to stay in my collection no matter how little I know about him.

My favorite card of his: 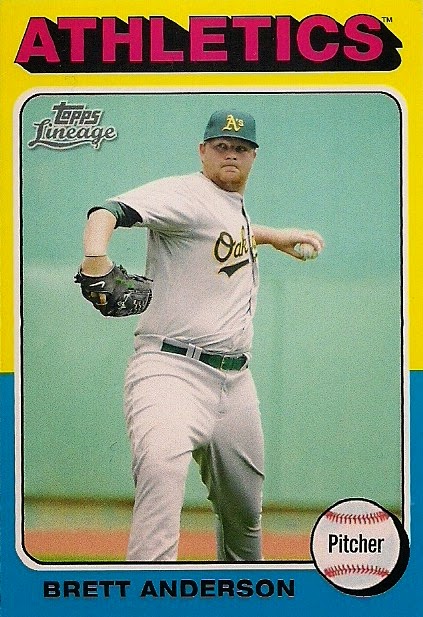 A Lineage mini, of course! 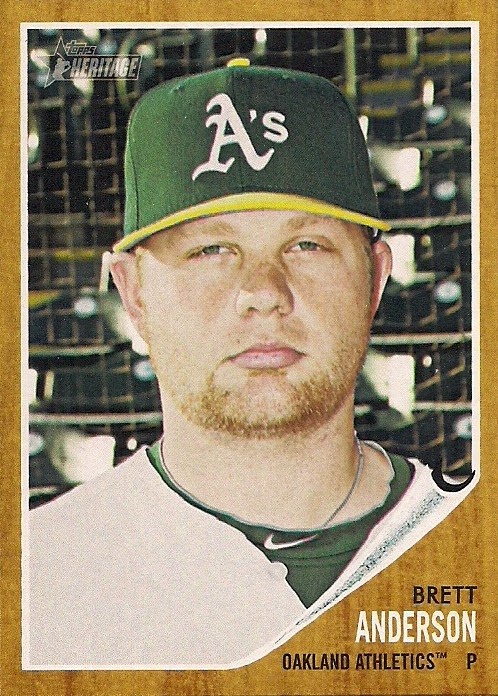 He's never been impressed with you. 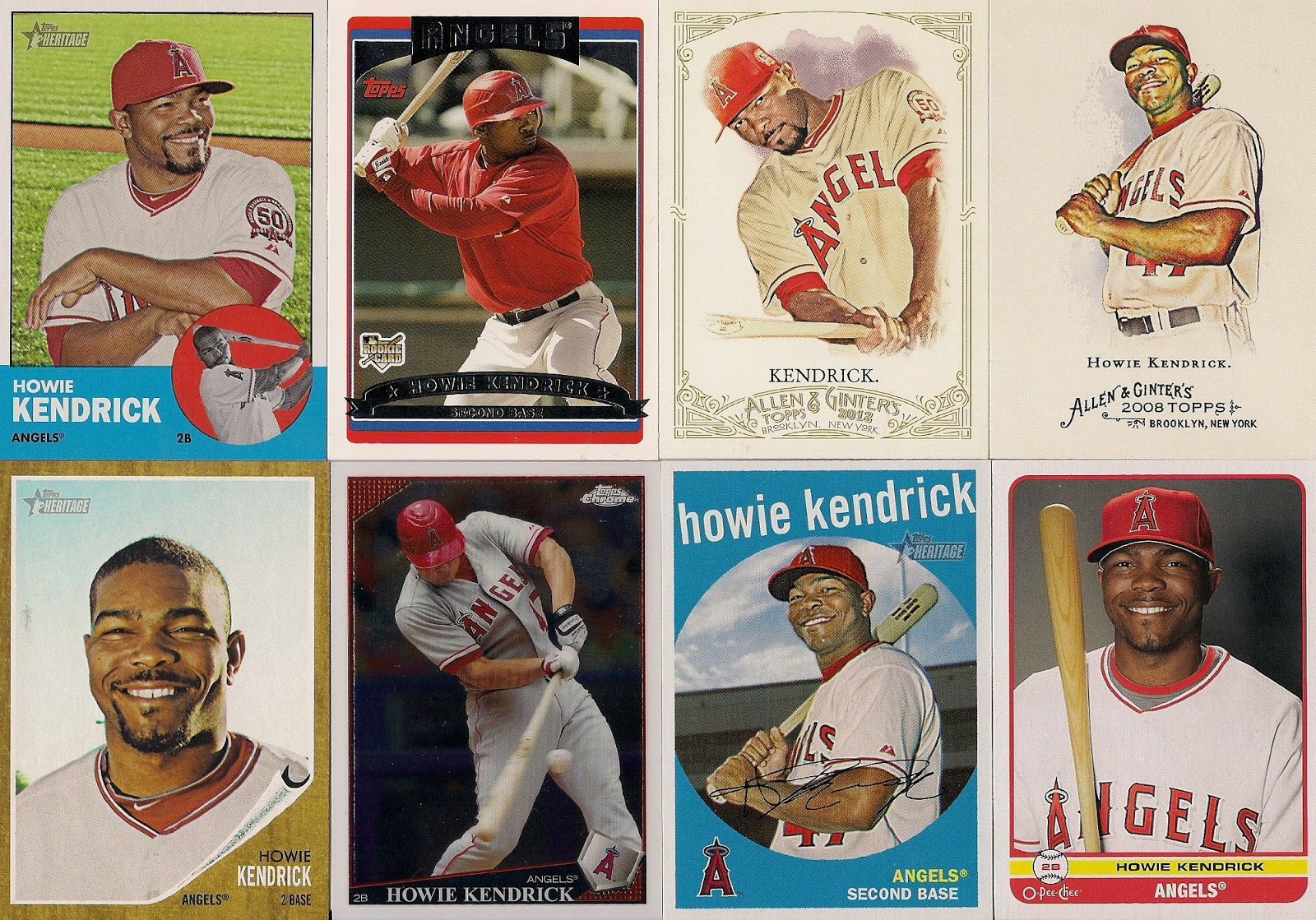 Number of cards I have: 18
What I knew about him before he became a Dodger: Well, honestly, until the last three years or so, I mixed him up with Kendrys Morales.
How I hope this player helps my team: He gives me a lot more confidence at second base than Dee Gordon did.
Cardboard claim to fame: Kendrick is the last card in the 2012 Allen & Ginter set (third card from the left in the top row). 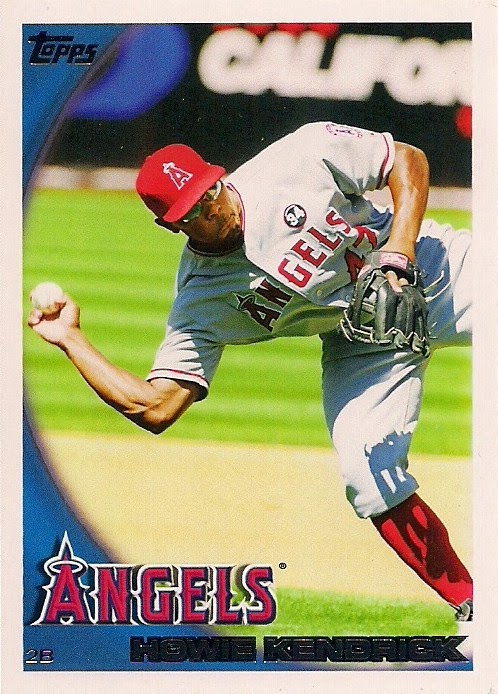 The "wave" on Kendrick's 2010 Topps card is blue while all his teammates feature a red wave. 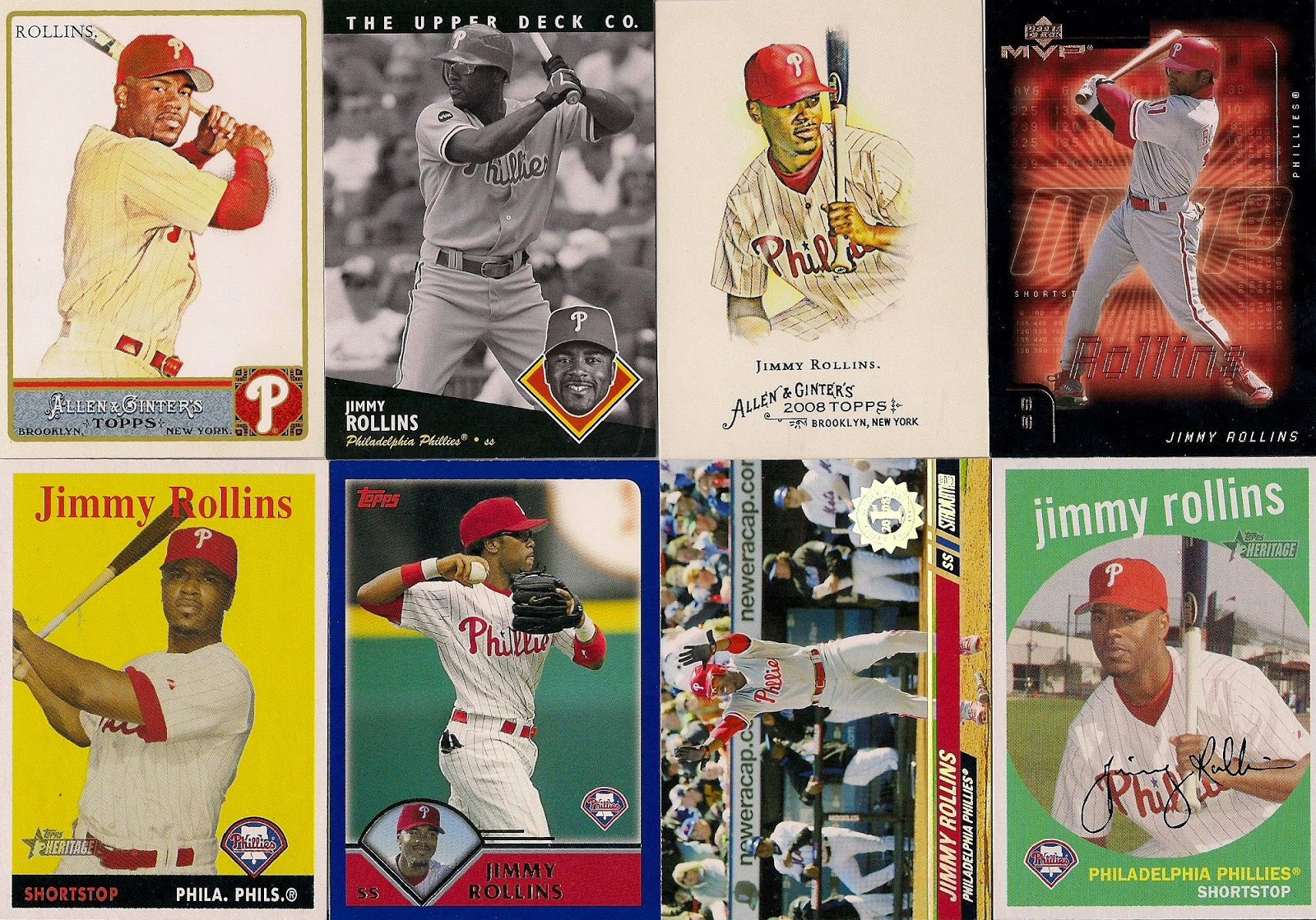 Number of cards I have: 35
What I knew about him before he was a Dodger: One of my favorite non-Dodgers around 2007-09.
How I hope he helps my team: He's a solid fielder and he isn't know for getting hurt, so that right there is an improvement for the Dodgers over the last several years.
Cardboard claim to fame: Rollins also appeared last in an Allen & Ginter set: 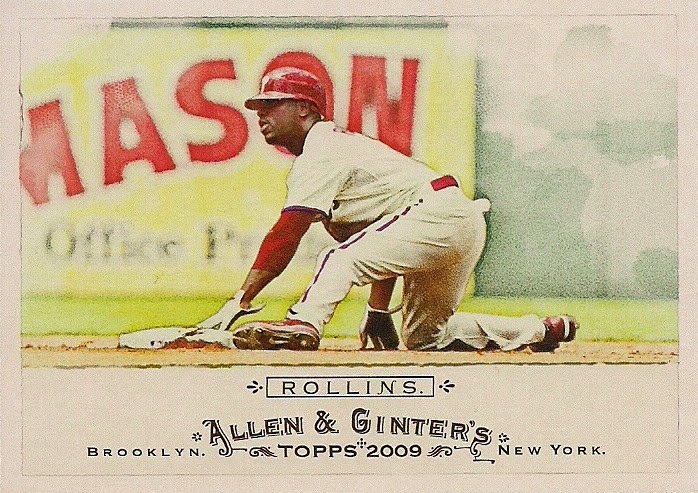 He was the final card in 2009. So the Dodgers' double play tandem are short-prints!

Also, both Rollins and Kendrick have a couple of the better cards in 2014 Topps: 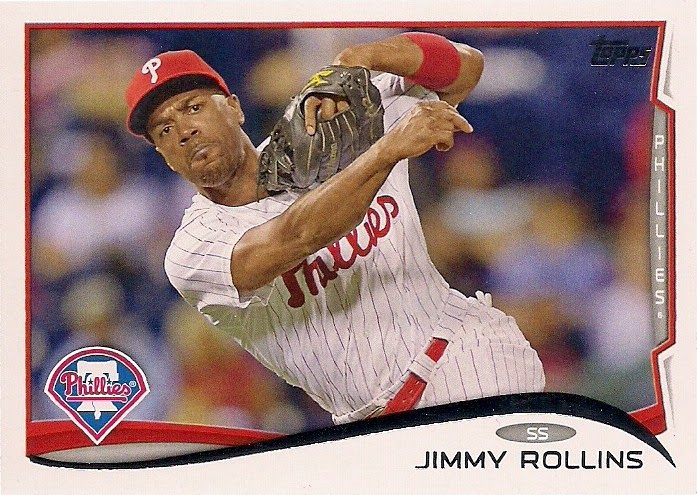 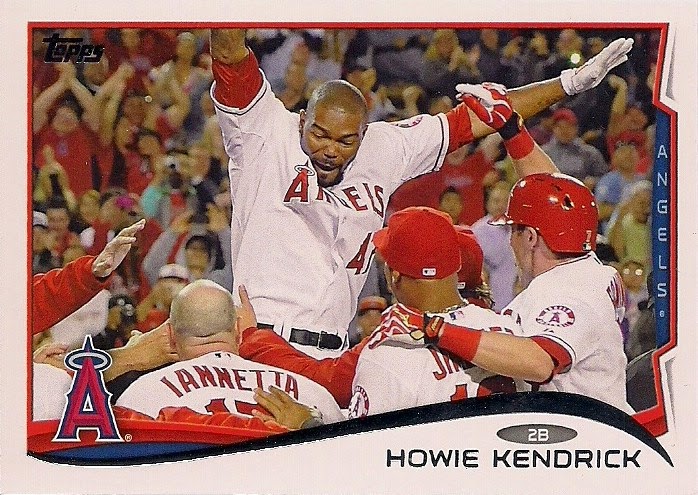 Rollins is one of many players recently who showcase my least favorite part of modern cards: 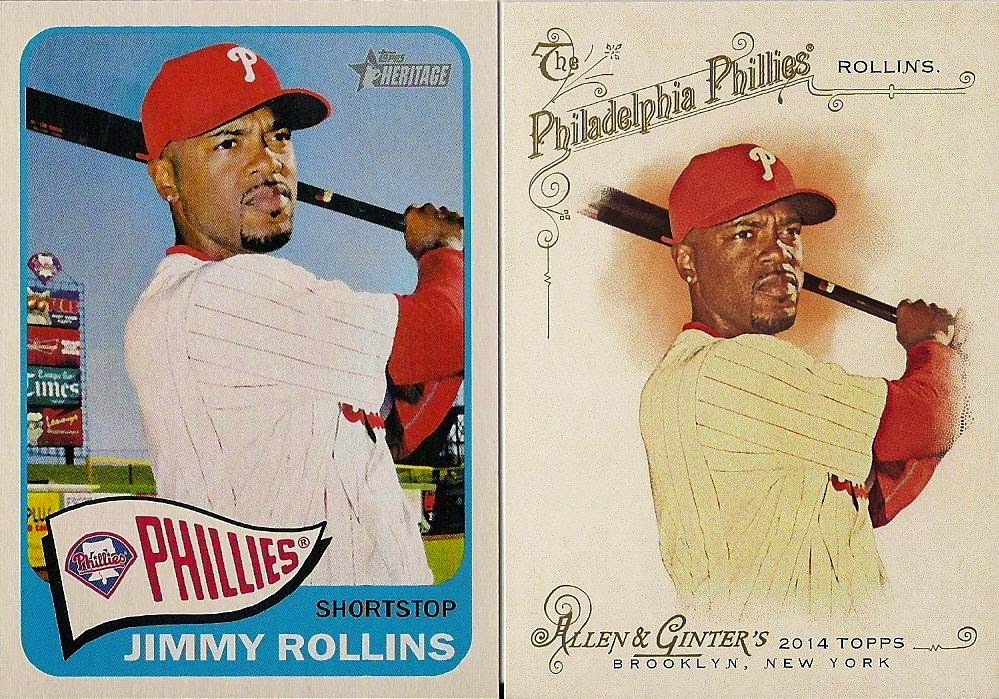 And, in case someone from Upper Deck is looking at this and snickering: 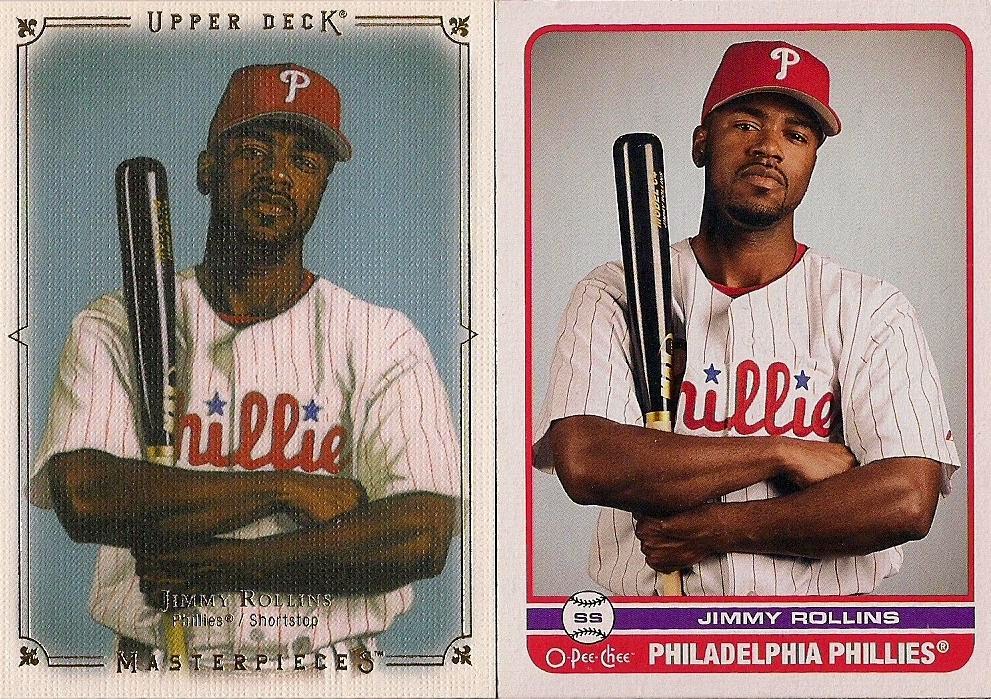 I don't think card companies think we talk to each other. Or buy more than one set. Or observe anything.

I'm hoping the Dodgers feature a couple more changes to the playing roster before the offseason is done. But overall it's nice to see some sort of plan and process involved rather than just accumulating stars.

Whether that works, well, you just got to put your faith in the people in charge.

After all, I didn't even know who Juan Nicasio is.

Anonymous said…
Heisey is a good guy and I hope he does well in LA. He was used primarily as a pinch hitter for Cincinnati. Kind of streaky as a starter, but fairly solid off the bench.
December 21, 2014 at 10:51 PM

capewood said…
I spent all season calling out Topps for using the same photograph in multiple sets. I know UD did it too but I don't think I have that Rollins Masterpiece card.

BobWalkthePlank said…
I liked that the Dodgers got Kendrick. Gets on base a lot more than Gordon.
December 22, 2014 at 7:43 AM

hiflew said…
One odd "did you know" about your new Dodgers is that both Nicasio and McCarthy had really scary injuries by being hit with a comebacker on the mound. I was watching the game in which Nicasio got hit. I thought he was dead or at the very least his career was over.

Anderson is also made of glass, actually that's not true. Glass sometimes stays in one piece. I think a more apt description is that he is made of sand. And not the cool way like the Spider Man villain.
December 22, 2014 at 7:46 AM

Daniel Wilson said…
I know McCarthy did well after arriving New York last season, but he was horrible, absolutely horrible here in Arizona. Let's just say I'm glad that he ended up with the Dodgers.
December 22, 2014 at 9:33 AM

Ana Lu said…
I'm impressed with all the changes that are going on!
I still don't get the more-than-2-teams trades. But I'm used to (european) football schema in which the trades are jsut between 2 teams and dot.
December 22, 2014 at 2:52 PM