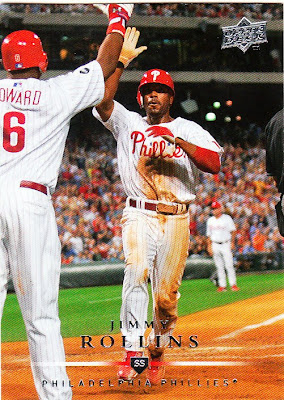 In the last 5-to-10 years, the percentage of night cards in sets has exploded. Reasons for that include Upper Deck's exceptional photography over the years, Topps devoting entire subsets to the All-Star Game, and the general tendency to start sporting events later and later (which is both a blessing and a curse for the night owl).

In fact, night cards are so frequent that I have an unlimited supply. I can also start to consider something that never would have been possible even 15 years ago:

Which player has appeared on the most night cards?

Now, I haven't figured this out. First, I don't have the time for that right now. Second, with the exception of one binder, most of my night cards are scattered about willy nilly. Third, I don't have a lot of cards from the Upper Deck late '90s/early '00s period, where I imagine there were a great many night cards.

But I do have some guesses. Jimmy Rollins, for example, seems to keep popping up on night cards. I like this one from 2008 Upper Deck quite a bit. It's my favorite of the Rollins night cards.

Here are a few others that seem to appear on multiple night cards: 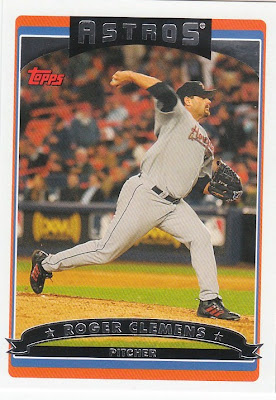 Jerk-face Roger Clemens appears on a bunch of them, unfortunately. In my worst-case scenario, he would appear on the most. Of course, there are all those Barry Bonds home run insert cards, too, which could be considered night cards by some. Fortunately, I don't. 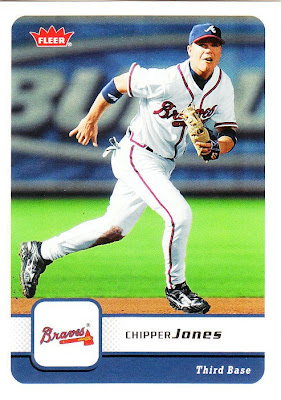 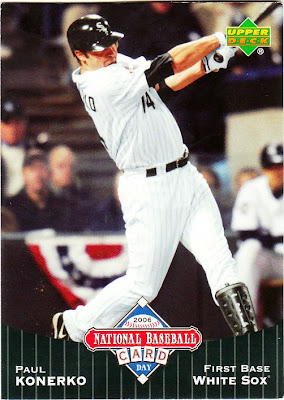 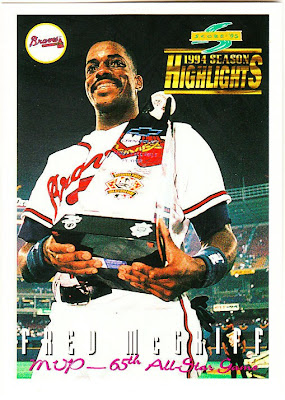 One day I will also figure out who has the greatest gap between their first night card and their last night card. It might be Fred McGriff. He appears on a famed 1989 Upper Deck card, which will one day make an appearance on this blog. This card is from 1995 Score, but I know he's been on more recent night cards.

There are others that seem to reappear at night: Ryan Howard, Vladimir Guerrero, Ryan Braun, Curt Schilling, Nolan Ryan and a few more.

I may not know for sure who has the most night cards in my collection. But you know me. Once I get an idea and it has to do with "the most," I'm all over it. However, it'll have to get in line behind that all-nickname team that I'm still struggling to get off the ground.

You can be sure, however, that I'll get there. And I'll be compiling the list under the lights.

Bo said…
I would imagine there would be a large sample of postseason photos in there, as those games are almost all at night. And what team has been in the most postseason games? ;-)
June 6, 2011 at 11:05 AM