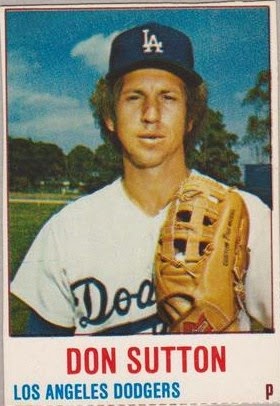 This is a 1978 Hostess Don Sutton card that I don't own. In the last few weeks I've seen two different bloggers post this card, each being acquired at their respective shows in November.

Normally, this would be a sign. It would be a signal that I was to go out and purchase this card immediately. The baseball card gods were speaking to me again.

Unfortunately, that's not possible at this time. Until money can be spent, and I'm hoping by 2015, the '78 Hostess Sutton is going to have to get comfy in his shopping cart residence. I hope he decorates it nicely for Christmas. It will help us both get through.

Meanwhile, one of those bloggers, Bert of Swing And A Pop-Up, sent me some Dodgers to ease the longing.

But he didn't send trading cards. Instead, he sent two standbys of 1970 Dodgers memorabilia -- postcards and 5-by-7 photos.

Since then, I've received several other postcards and 5-by-7's that have both delighted and confused me.

It's impossible to piece together when all of the postcards and 5-by-7's were issued without taking a couple days off to devote to the project. But it's interesting getting a few different pictures of new guys as well as the same guys. 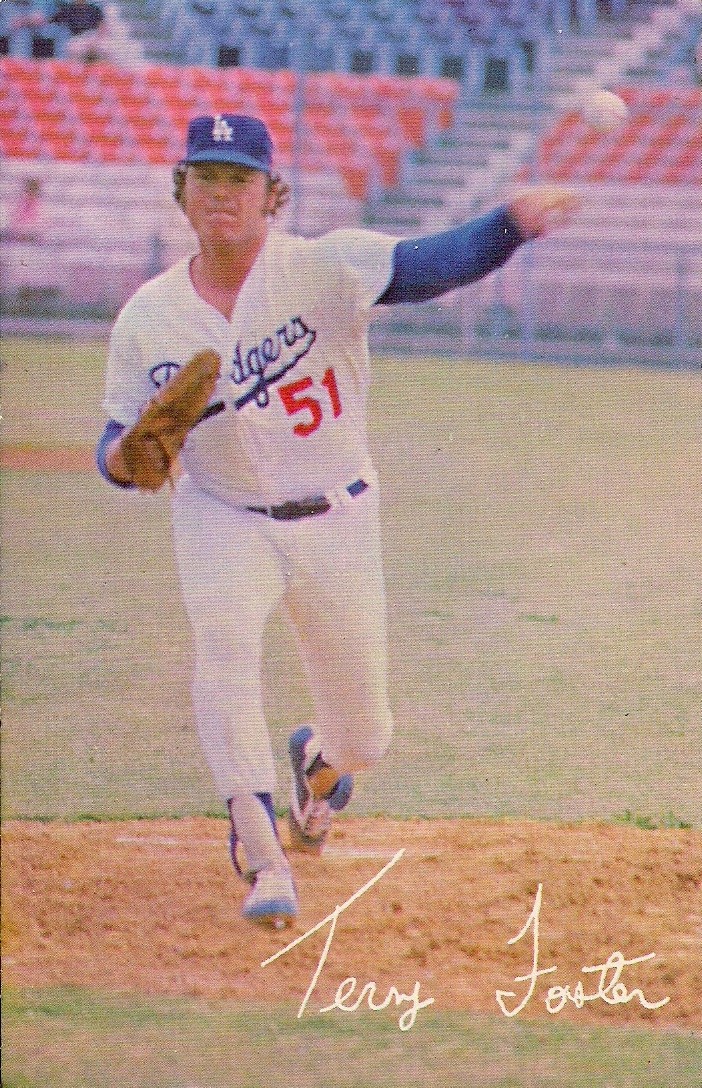 Here is the postcard that Bert sent of Terry Forster, the future Tub Of Goo. It's very interesting to me because it differs from the Forster postcard that I have owned since back in the early '80s. 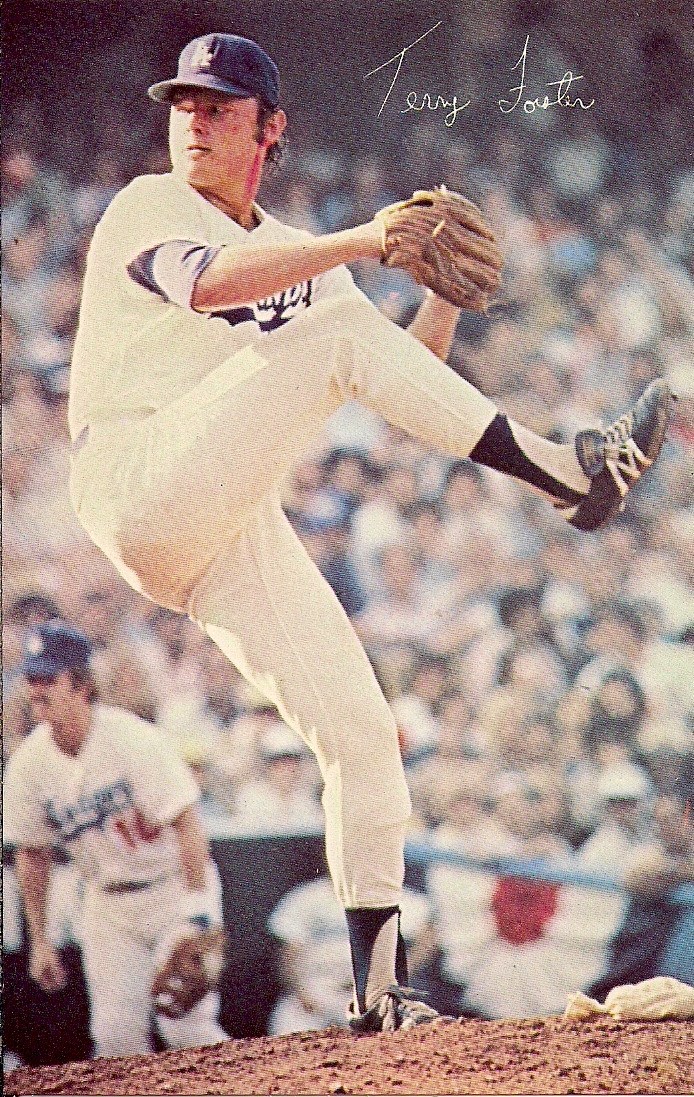 You can see Ron Cey lurking on this one. He'll pop up later, too.

So it's cool to see two different Forsters, but of course the question comes up -- "which one was issued when?" And since there are no copyright dates on the back, I could be asking that question forever. 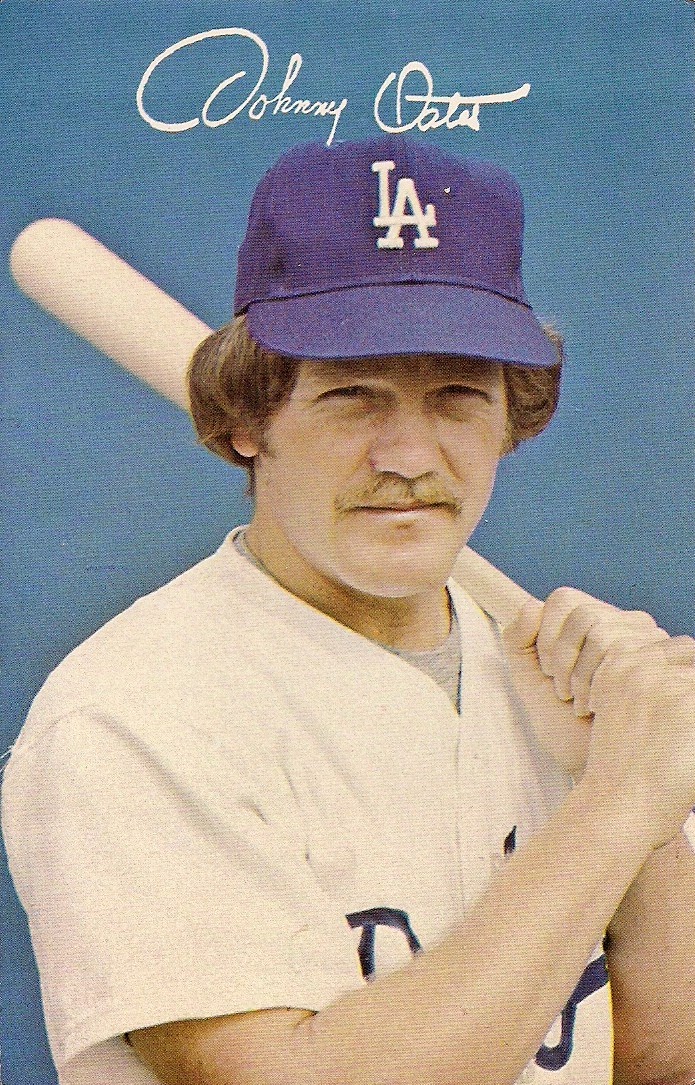 Here is the first Johnny Oates postcard in my collection. Since Oates played for the Dodgers between 1977-79, this card must have been issued in one of the sets from that year. But which one? Who knows. 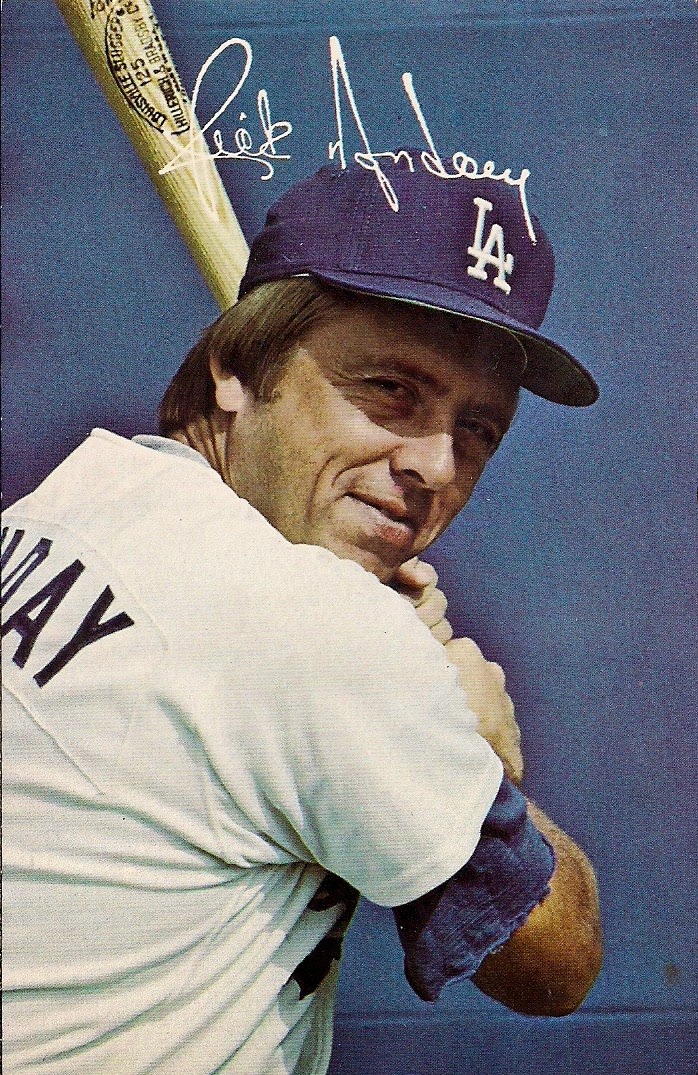 This Rick Monday postcard is new to me, too. Monday was a Dodger from 1977-84. But there was no Monday in the set of Dodgers postcards that I ordered in 1981. Let the guessing games begin. 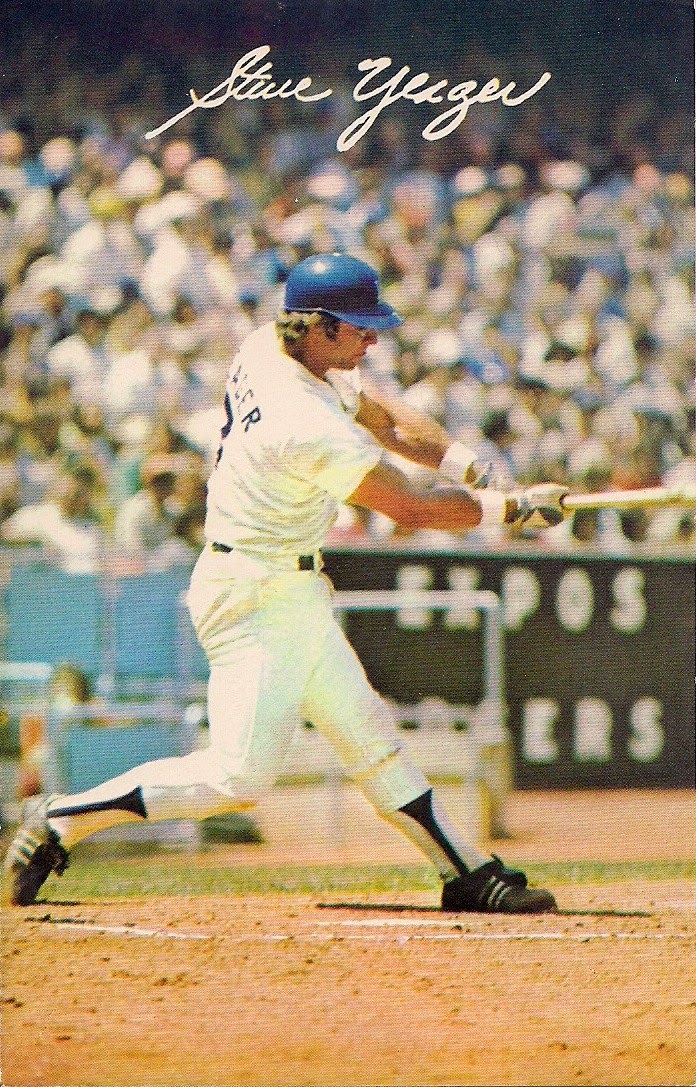 It's difficult to believe there was no Steve Yeager in that initial package of 20 pictures I bought in 1981, but this postcard of the catching veteran from Bert is my first. 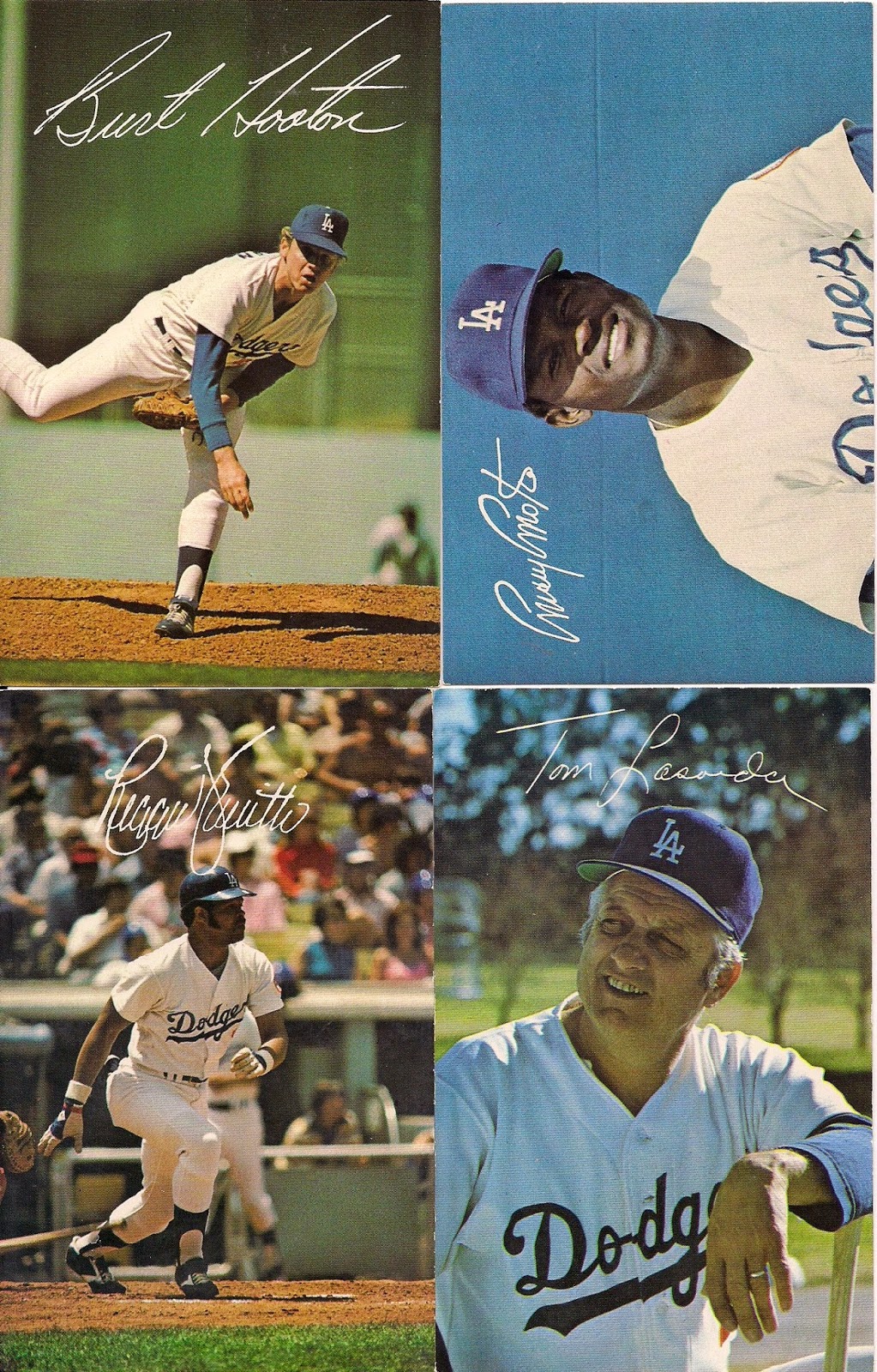 These ones I received I know well as they were in the original package from '81. In fact, I've accumulated a dozen or so postcard dupes if any Dodgers collector is interested in some hand-me-downs. Just give me a month to be able to afford postage. 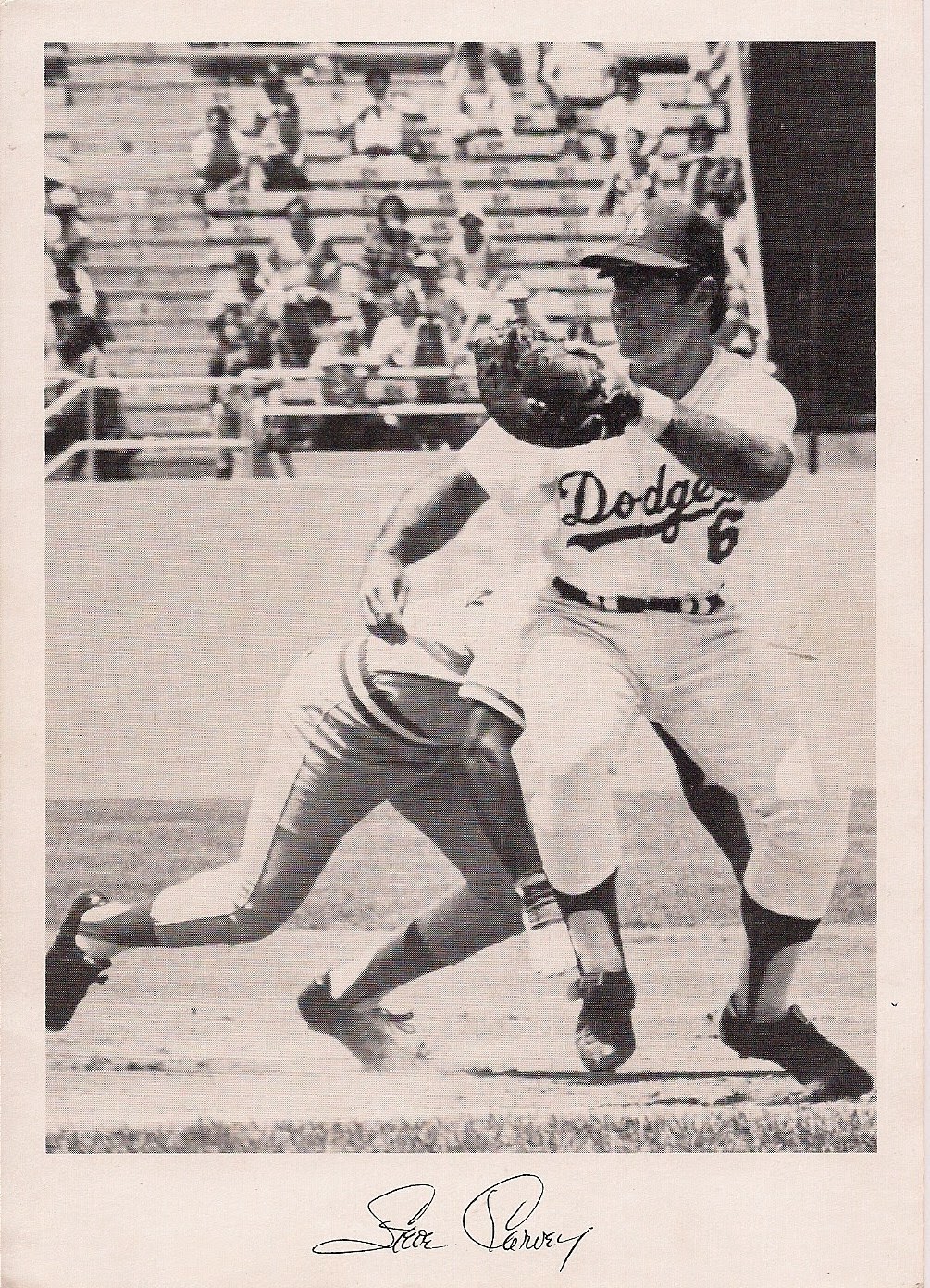 Bert sent five of the 5-by-7 photos. This is the only one that I already had.

These photos are printed on very flimsy stock that was pretty standard back then. But that didn't stop me from thinking these were cool when I first pulled them out of the envelope a few decades ago. 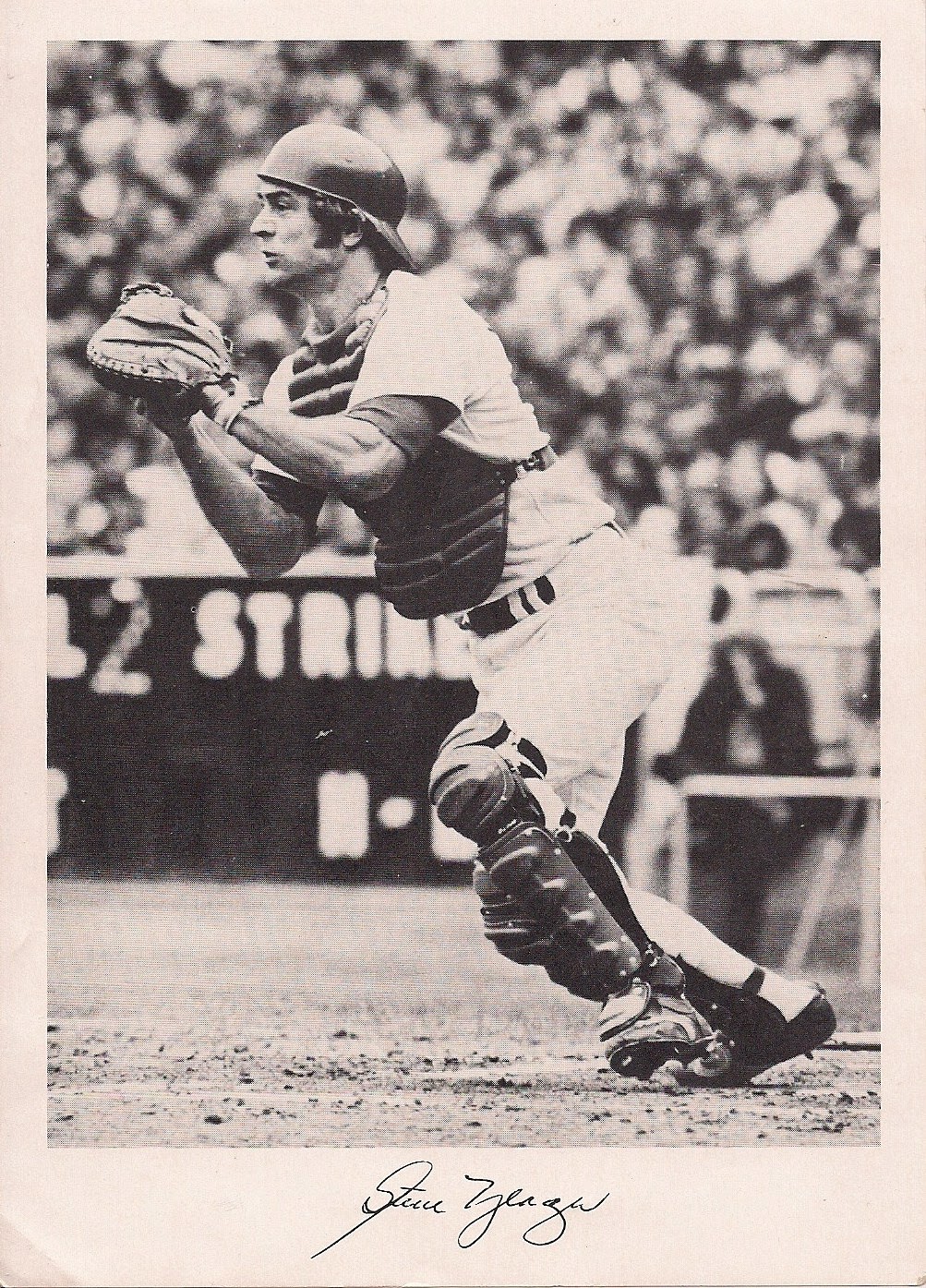 Again, some of the players are the same, but the pictures are different depending on when they were issued. This Steve Yeager is slightly different than the one I owned already. 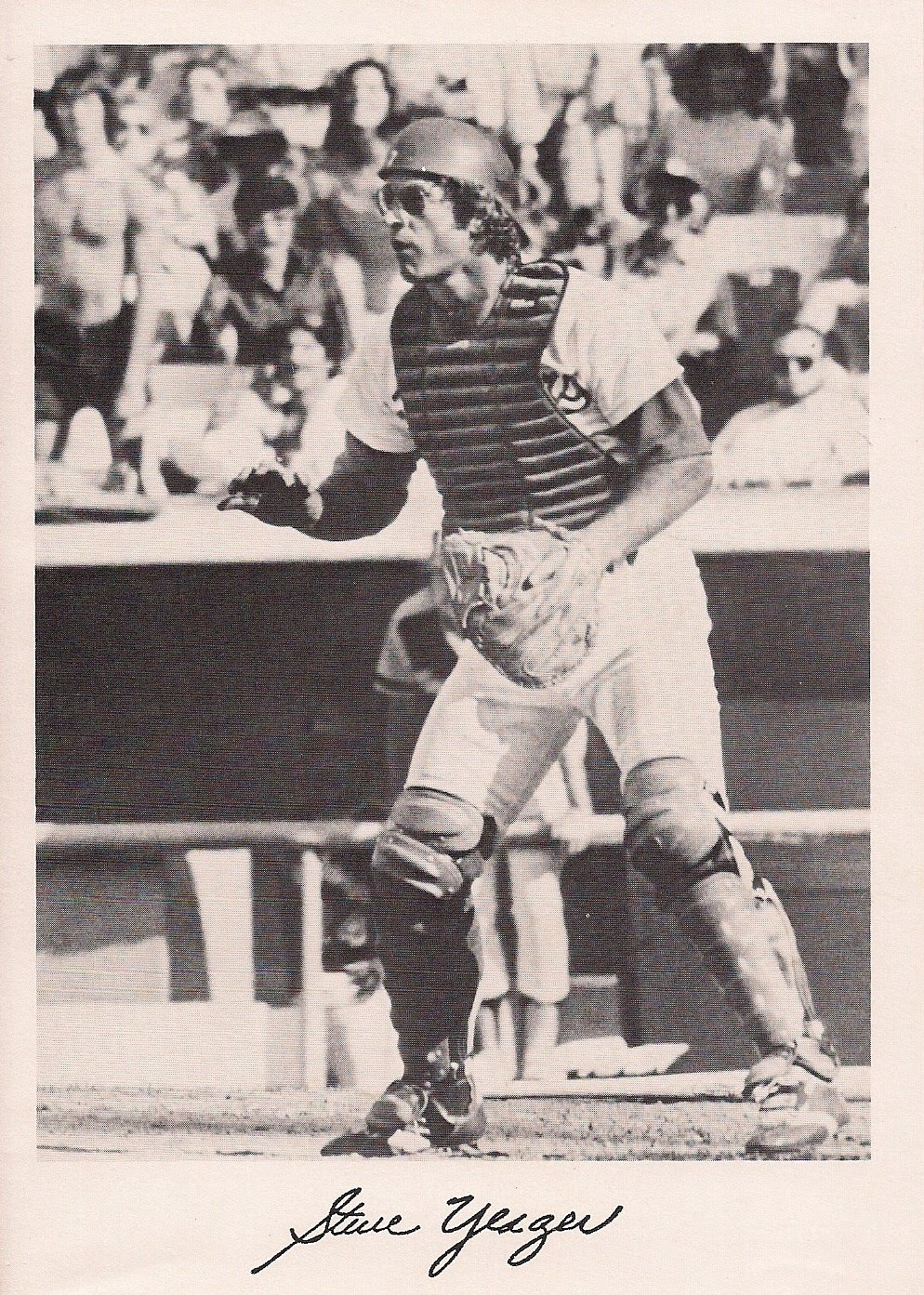 Steve is wearing his trademark shades in this one. 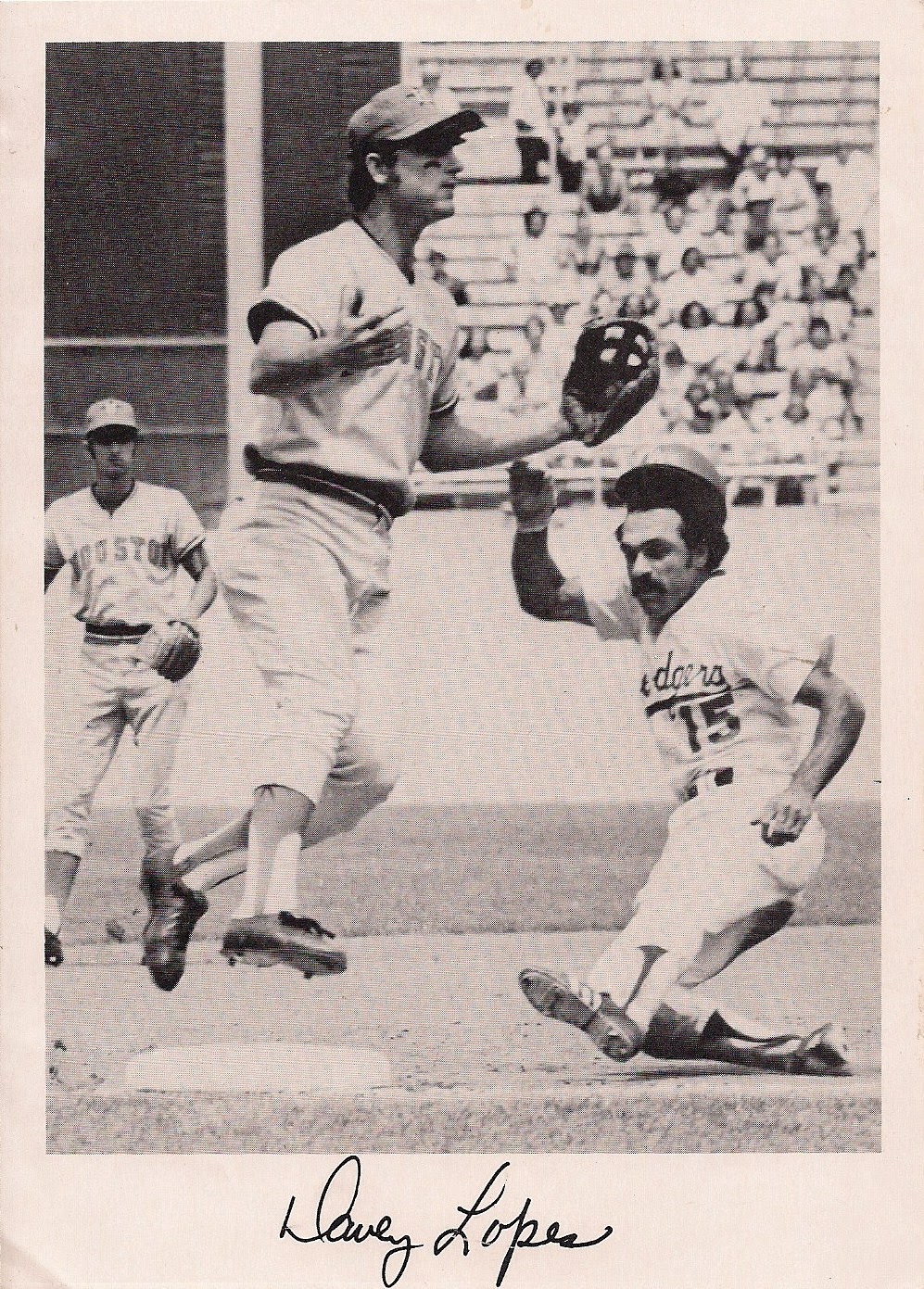 I am guessing that this Davey Lopes 5-by-7 is from around 1975, based on the uniforms that the Astros are wearing. They went to the rainbow-brite unis in '75, so this has got to be a picture from 1974 at the most recent. Cool shot. 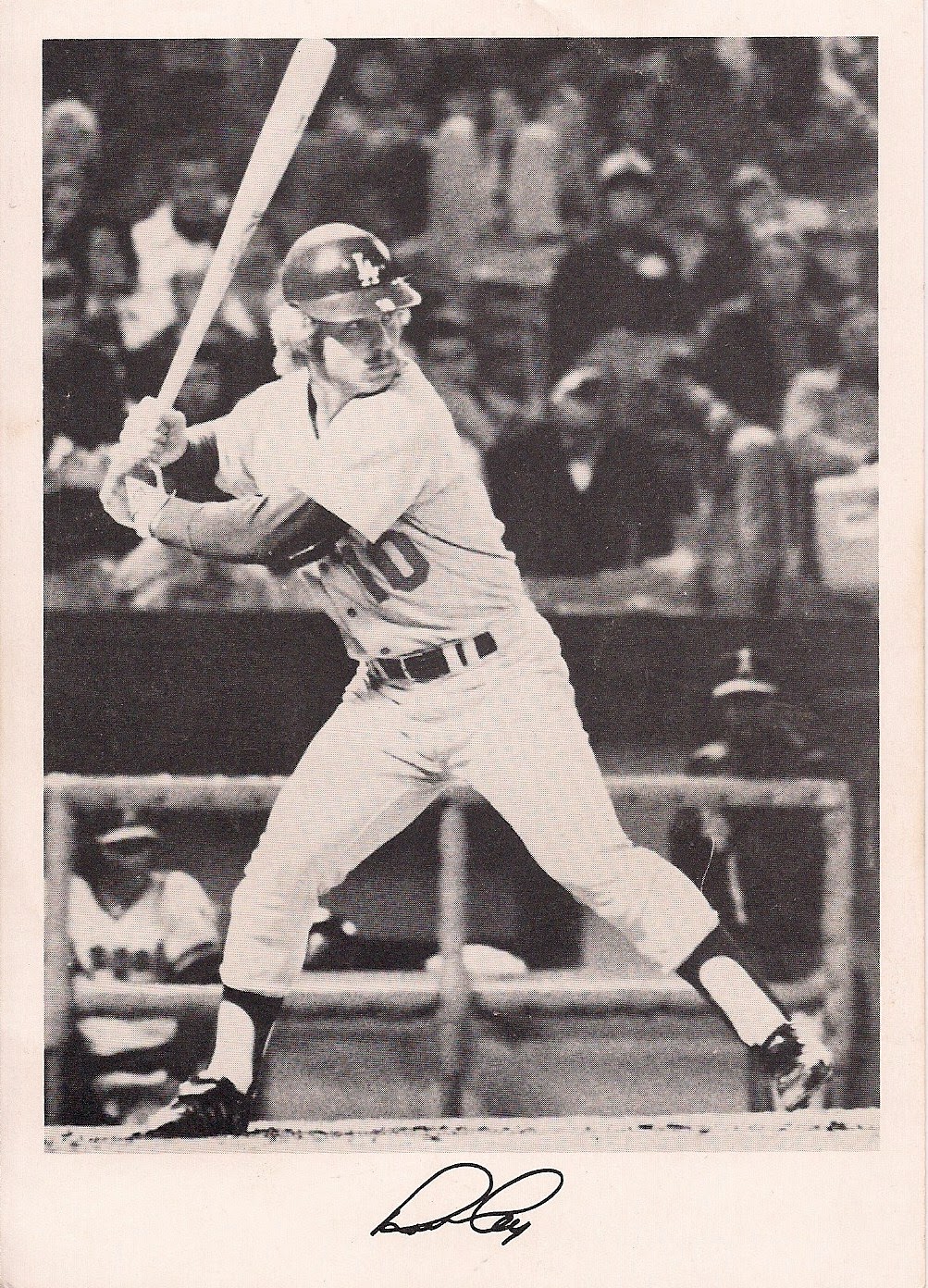 I really appreciate this as it's another Ron Cey in my collection. Notice that the Dodgers are playing the Angels, which must mean it's one of those SoCal exhibition games.

With this Cey, I now have three different 5-by-7s of Cey. Here are the other two: 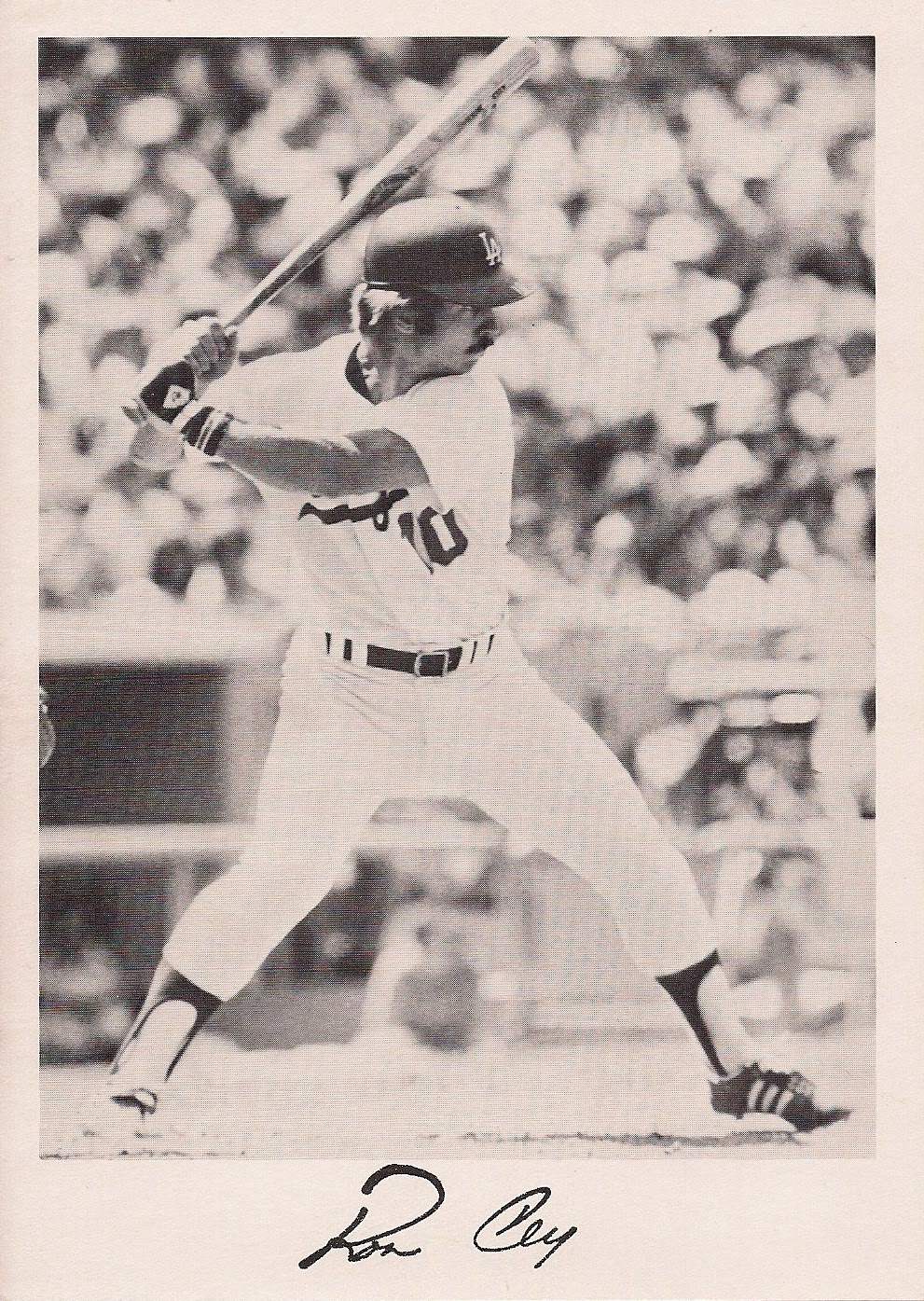 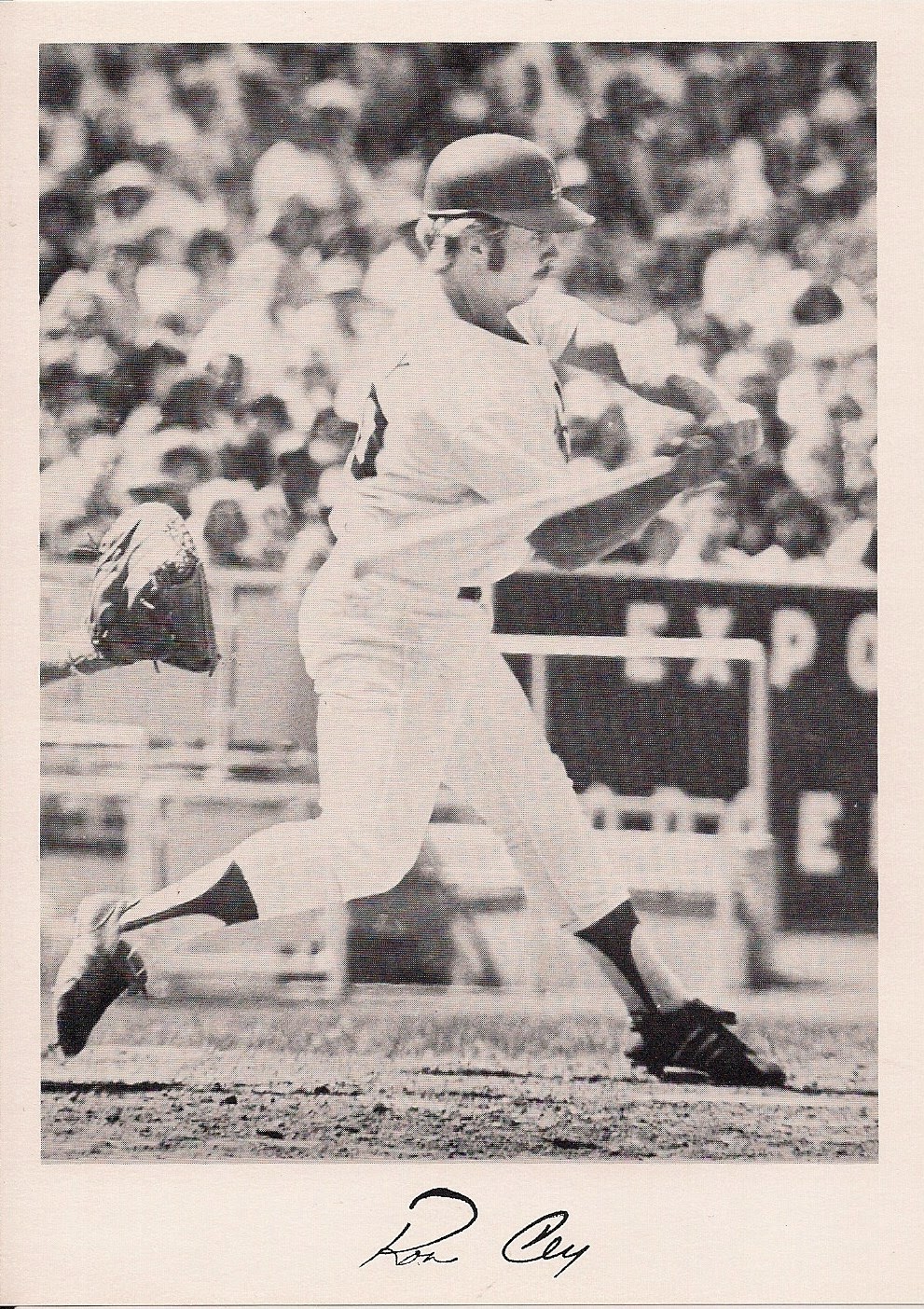 I like the different batting looks, hairstyle lengths and signature scrawls.

Cey is one of only two players for which I have three different versions of the flimsy 5-by-7s.

The other one is Manny Mota.

But you're not going to see a lot of difference between the pictures.

With the Mota that Bert sent me ... 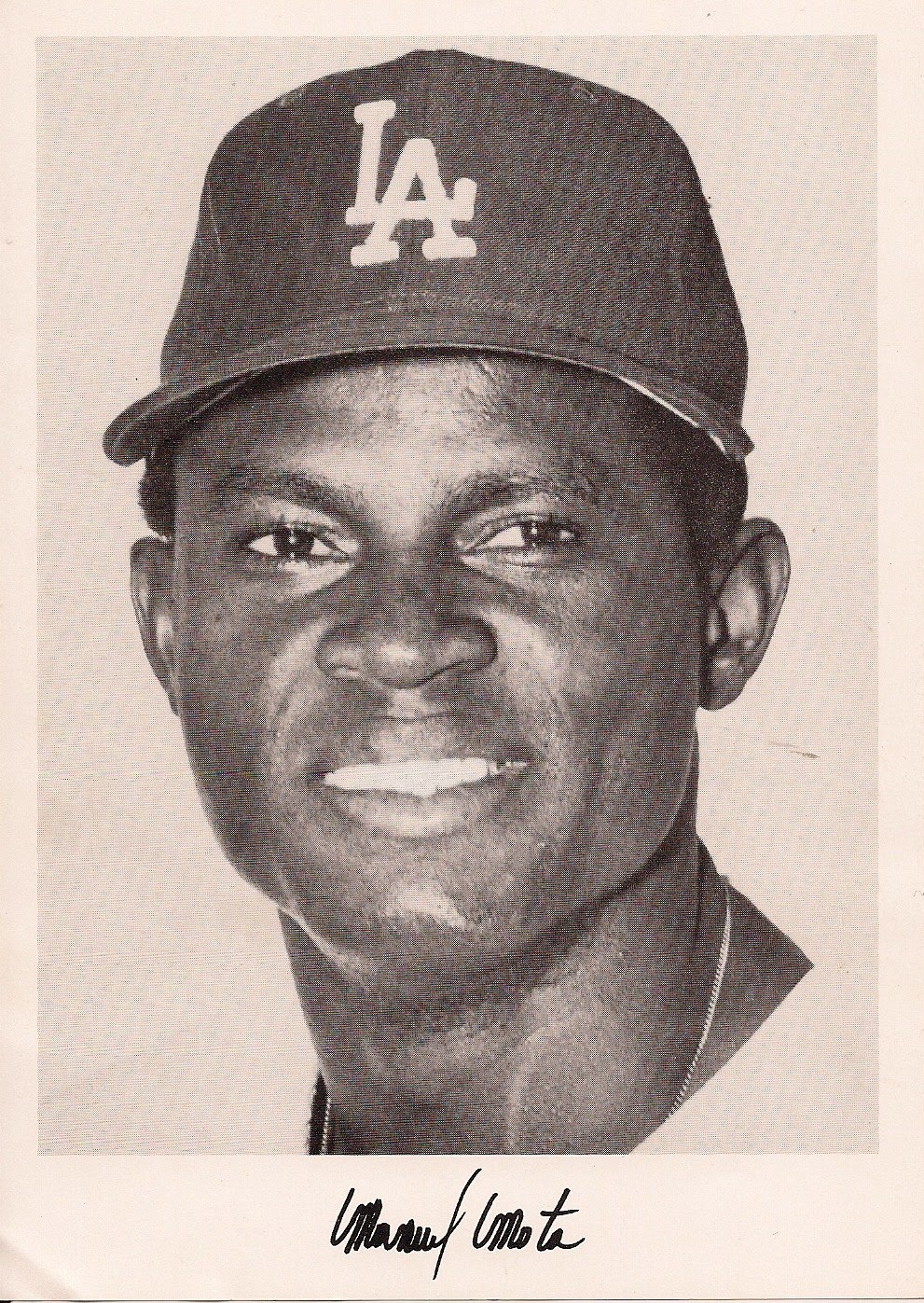 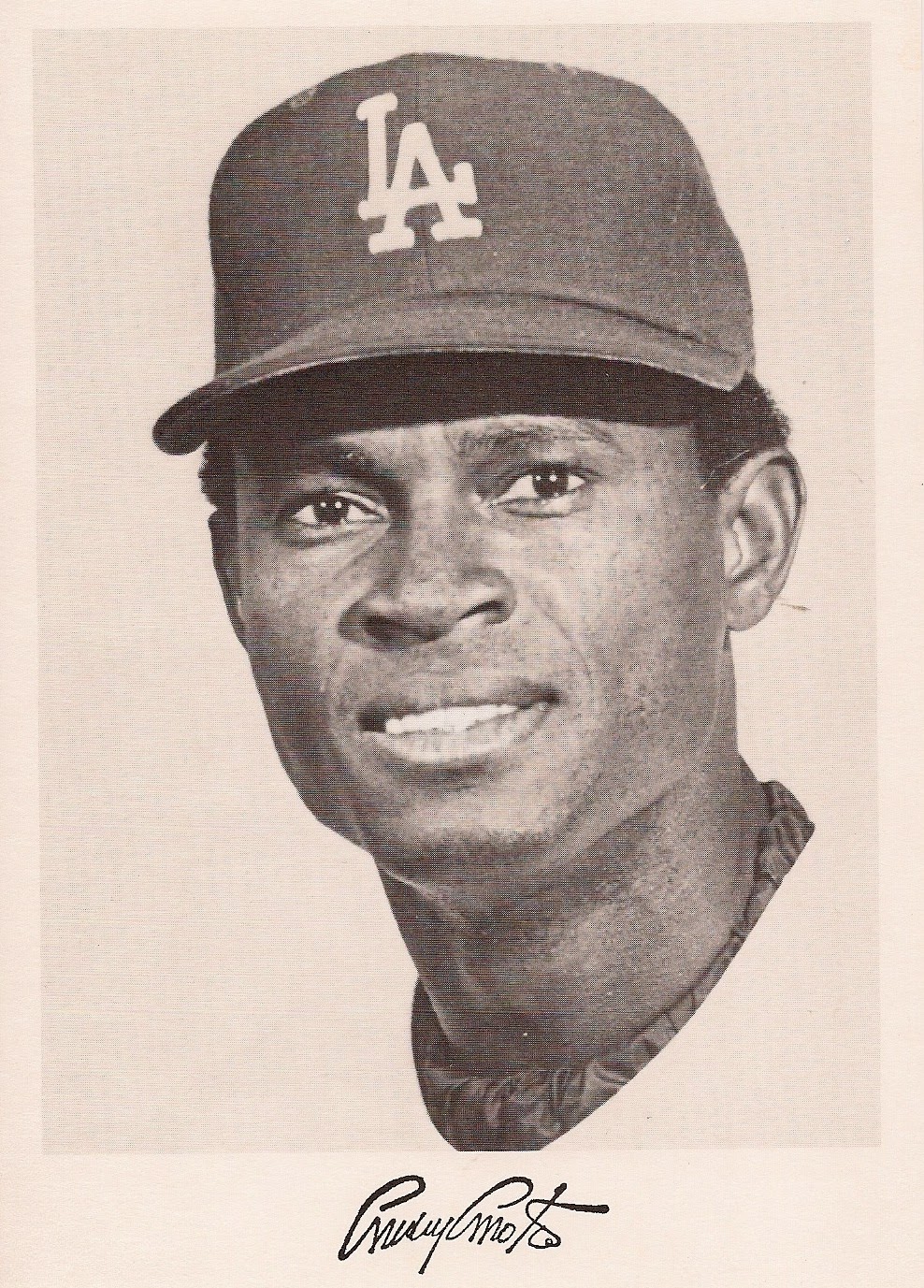 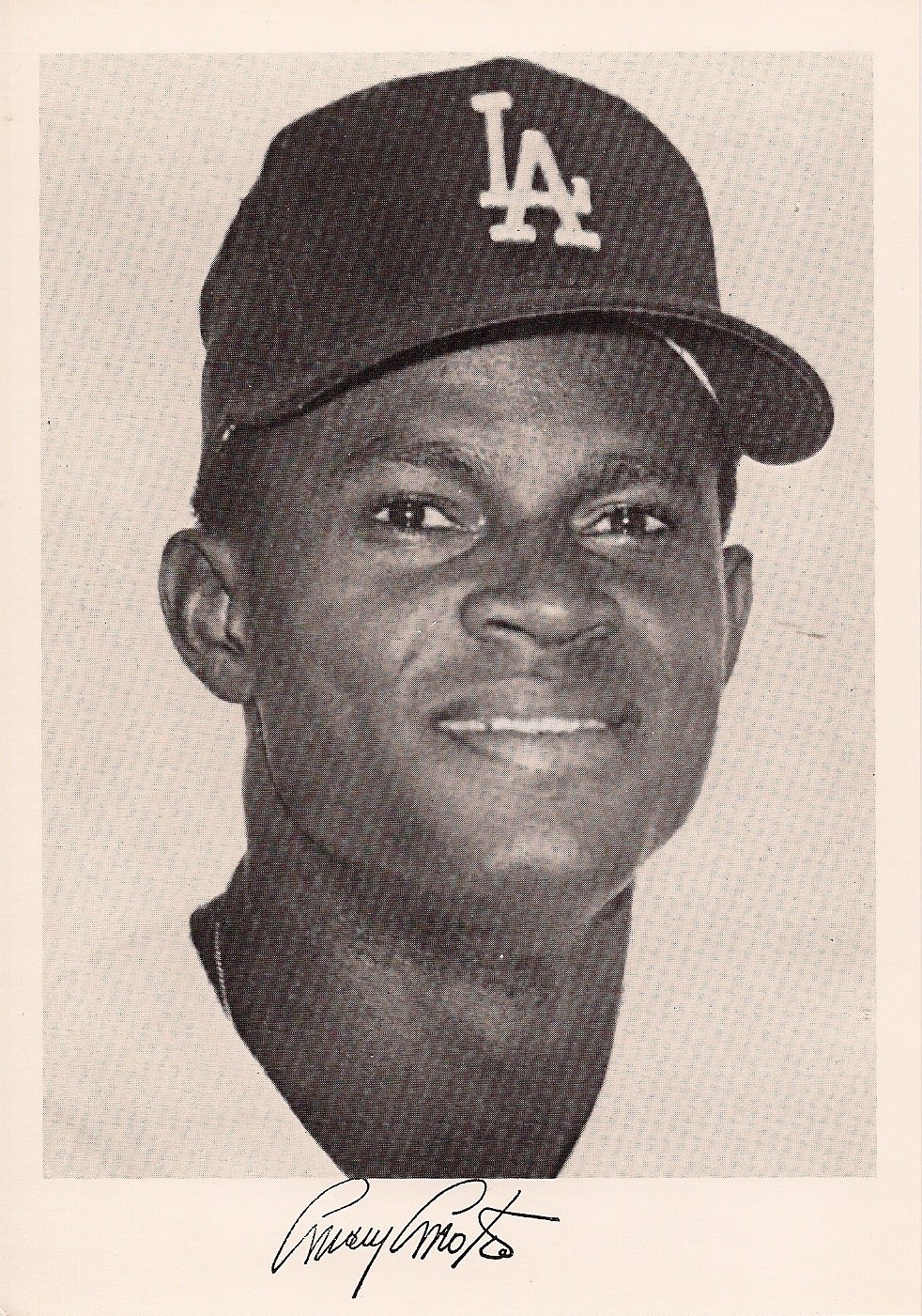 ... I now have his mug shot in triplicate!

I could frame them and put them up over the fireplace like parents do with their kids' school photos.

Actually, I should probably find some pages for these photos. Now that I have more than 60 different 5-by-7s, they deserve to be out in the open instead of tucked away in a yellow envelope.

These are always a nice reminder of the way things were in the '70s.

I'll appreciate viewing these while a sit patiently waiting to press "empty cart" on that Hostess Sutton.

JediJeff said…
"...of Terry Forster, the future Tub Of Goo."

BaseSetCalling said…
I typed some search terms involving the word "vending" into eBay recently and was quite surprised to discover that Hostess cards could have arrived as singles, from vending machines dispensing Twinkies.
December 3, 2014 at 12:09 AM