The Bison has roamed 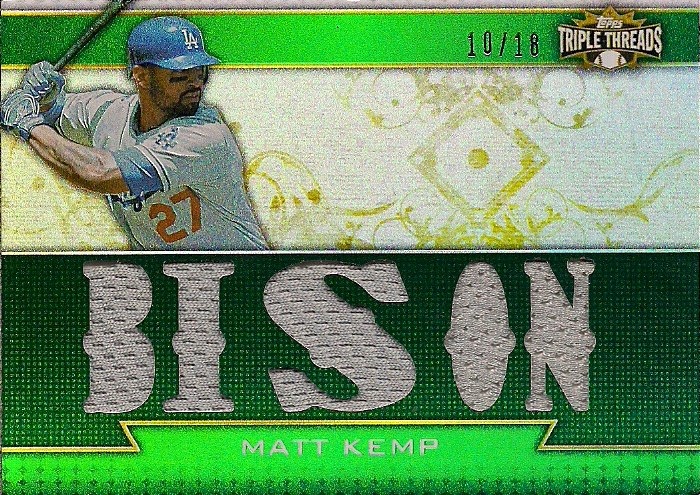 It's interesting to watch fans react to the trade of a longtime star player. In the last 12 hours I've seen every reaction on Matt Kemp's trade to the Padres from grudging acceptance to "it's all part of the plan" to "these guys running the show have no idea what they're doing" to "DEAR GOD, WHYYYYYYY?"

Instead, this appears to be part of a complicated, orchestrated effort to improve the Dodgers on a year-to-year basis and for the long-term. I can respect that. And I can suppress whatever feelings of separation I am currently experiencing.

That said, I am very glad I am not a player collector. I don't think I'd be dealing very well right now at all.

But that doesn't mean I haven't accumulated a lot of Kemp cards during his Dodger tenure. You don't hardcore collect a team and not have a lot of cards of one of its stars. And, so, by my count, I have 316 different cards of Kemp. Probably not as much as this guy, but something sizable enough for me to dazzle you with my favorites.

Here are just a few of my favorite Kemps to recognize all that he gave to the Dodgers the last nine years: 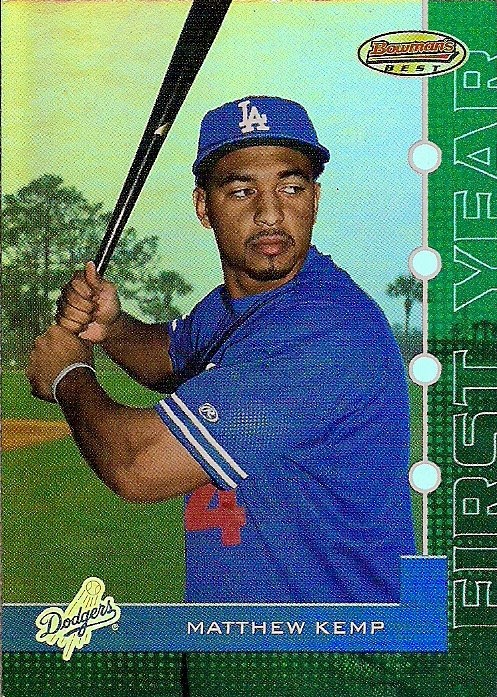 I'll start from the beginning. It's a Bowman's Best card of "Matthew" Kemp from 2005. I have two of these in my binders, which tells you how much this card means. I probably have no more than 10 other cards in which I've stored two of the same item in my binder. 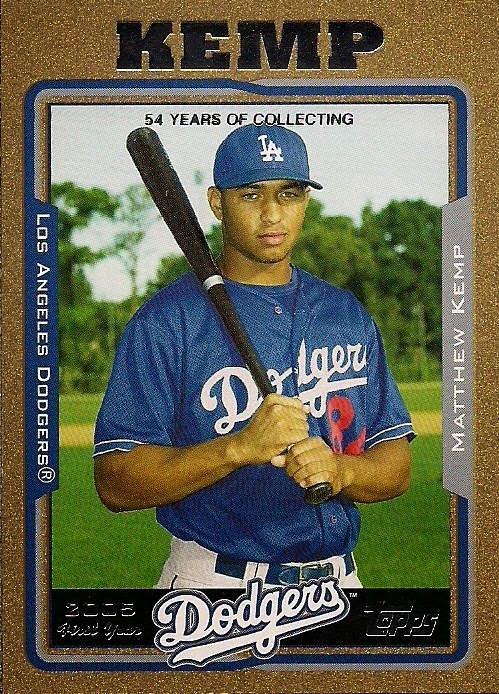 This is Kemp's first Topps card from '05 Updates & Highlights. The gold parallel version. Gold parallels were a lot of fun back then, with sparkles that twinkled back at you as you held it. I'm pretty sure I had no idea of who Kemp was in 2005. Good for the people who did. 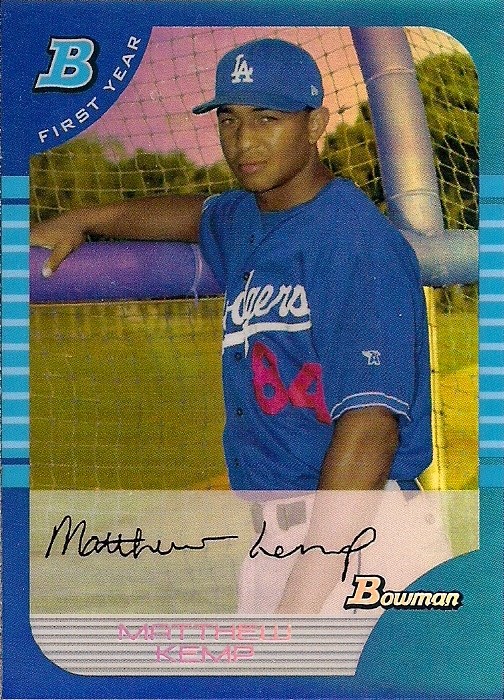 Probably my favorite Kemp card from his first year of cards. Everything blue goes better with the Dodgers. And blue-shiny complements the Dodgers exceedingly well. The back says "goes to the plate hacking." He did that. 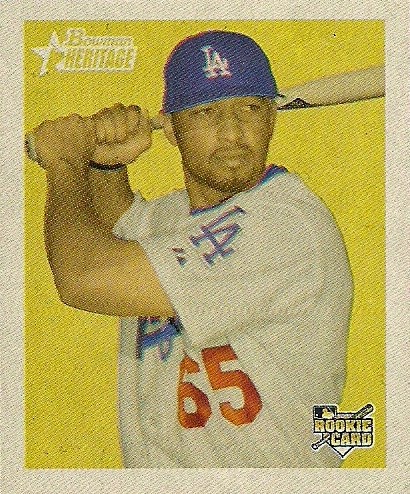 This is the mini version of the 2006 Bowman Heritage set. Since this set mimicked 1949 Bowman, which were approximately the size of the minis, I consider these the proper 2006 Bowman Heritage cards and the "regulation-size" cards ugly behemoths. They are not to be trusted. 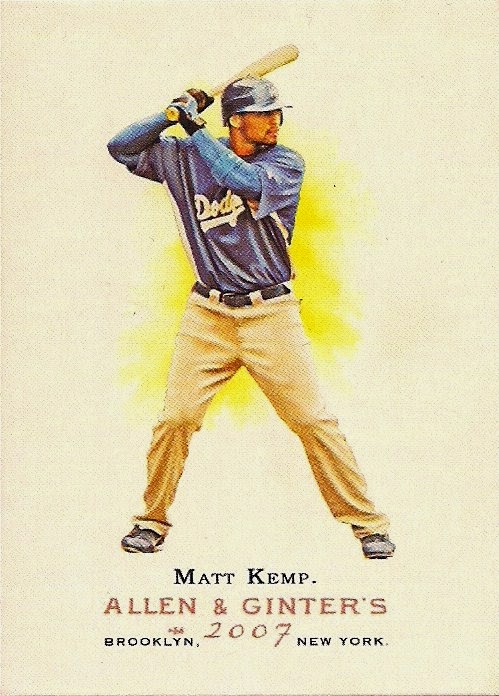 This has always been my favorite Allen & Ginter Kemp card. The full-body Ginters, when the proper size (not too tiny) are fantastic cards. I still lack the mini version of this card. Maybe now that Kemp's a Padre, I can get someone to relinquish. 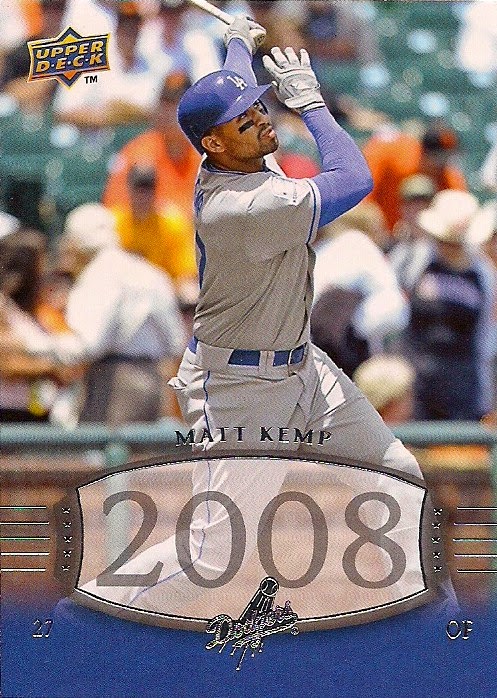 Kemp's power to the opposite field is what I will always remember about his game at the plate. This '08 Timelines card is one of the first to show Kemp's opposite-field swing. It reappeared a number of times since then, but I like this one the best. 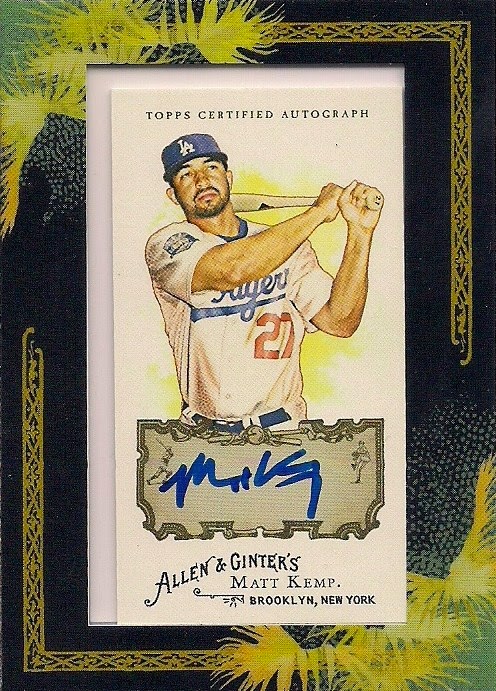 As Kemp grew more and more productive and famous, his autographs were too popular and expensive for me. If I was a player-collector, I'm sure I'd have more. But the majority of my Kemp autographs are from this period, when few cared about him except us Dodger fans who knew he was going to be great. And it's a good thing, too, because the 2008 Allen & Ginter autographs are hard to beat. 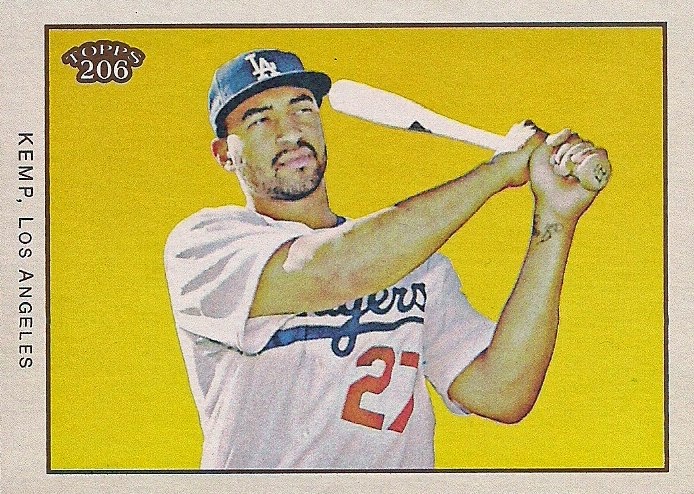 I'm not much for the Topps 206 retro sets. It was best when it was issued in 1909. But this might be my favorite Topps 206 card from 2009. It's a horizontal, which I know throws off some folks OCD because his name is sideways, but I don't care. The photo is too grand. 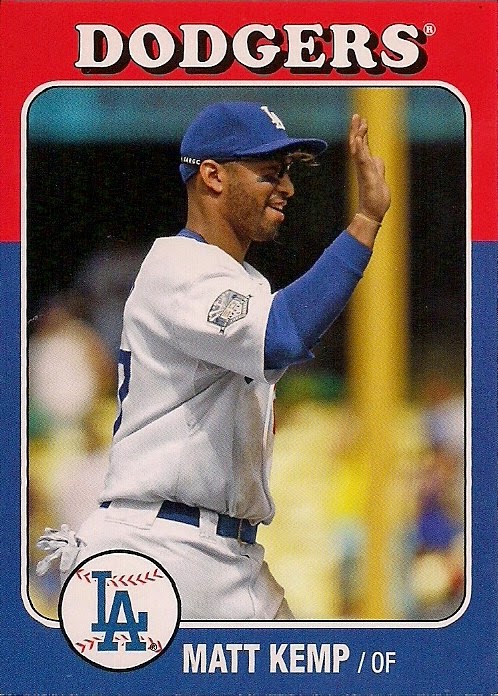 Upper Deck didn't last long pilfering Topps' designs but I will always appreciate seeing Kemp in a 1975 Topps-style design, even if it is a knock-off. This card makes me happy. 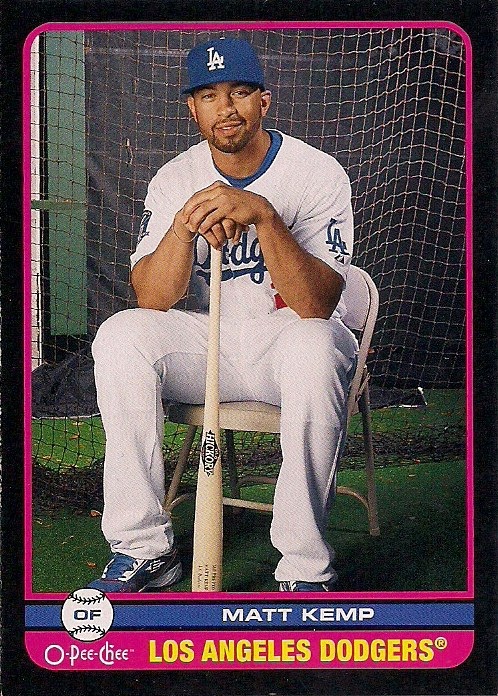 This card, like the one above it, is considered a 2009 O-Pee-Chee card. But they're not from the same set. Because card collecting was weird in 2009. This is a nice portrait shot (on the awesome black-bordered parallels in this set), probably the best portrait of Kemp's on cards. 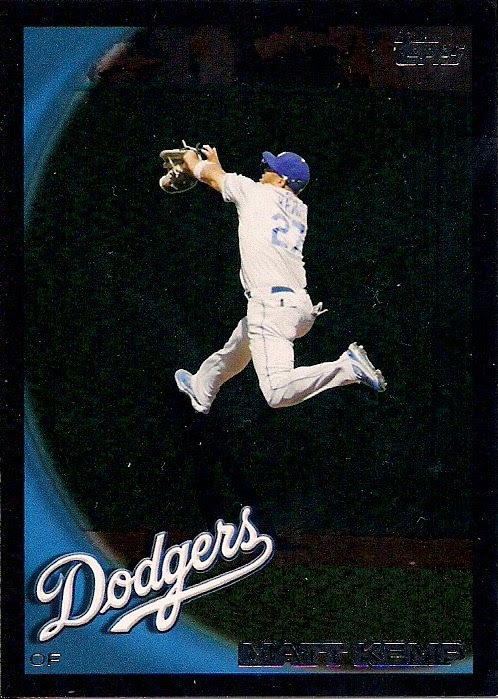 The Topps black-out parallels that lasted from 2009-11 may not have featured the best execution but they made for pretty cool cards. This one from 2010 is goofy and awesome at the same time as Kemp seems to be getting sucked into a swirling vortex. Look at him getting smaller and smaller and smaller! 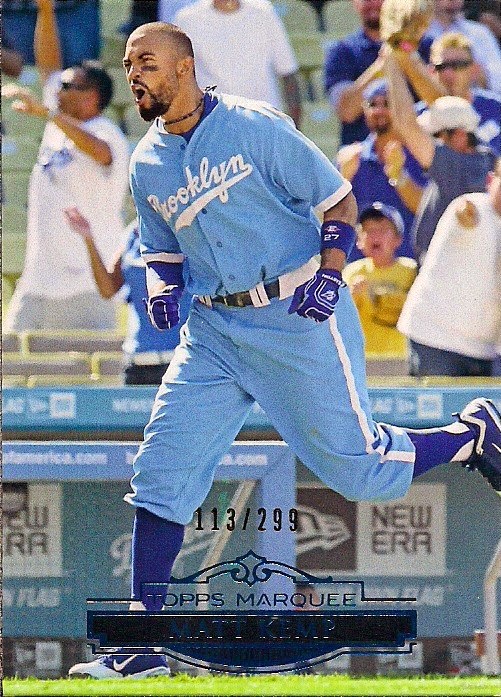 Kemp is an emotional player, as you can see here. For the most part, he keeps it in check (although I'll be interested to see how Kemp and Carlos Quentin reconcile there in San Diego). What I've always liked about Kemp is that he loves the game, plays it with joy and is a genuinely pleasant, right-thinking guy.

That's what I'll miss about Kemp. Being proud that a player like that is on my team.

I'm not really freaked out about losing his bat -- I'm pretty sure he's starting to decline even if no one really notices it for a year or two -- and I'm not freaked out about the team that the new management is creating because I know they're trying to create something great.

It's just that I won't get to collect any more cards like these: 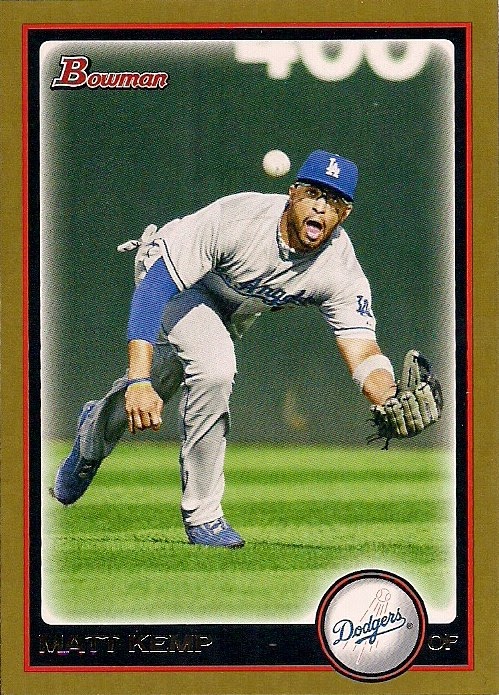 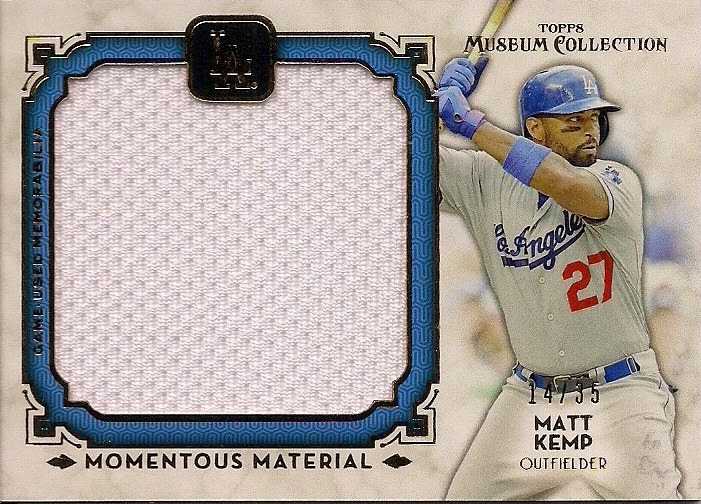 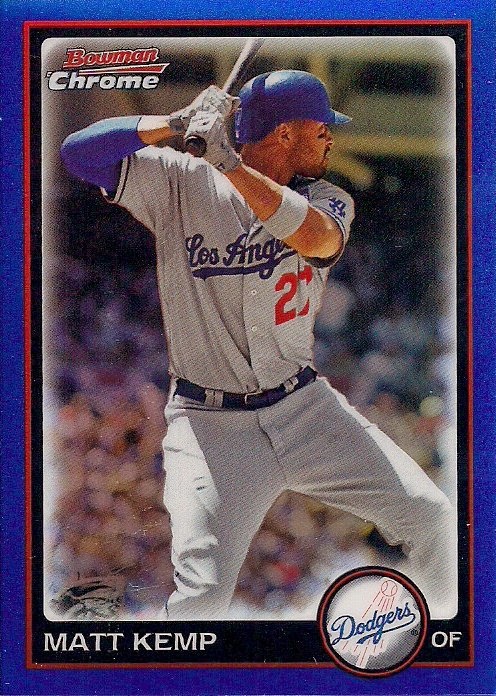 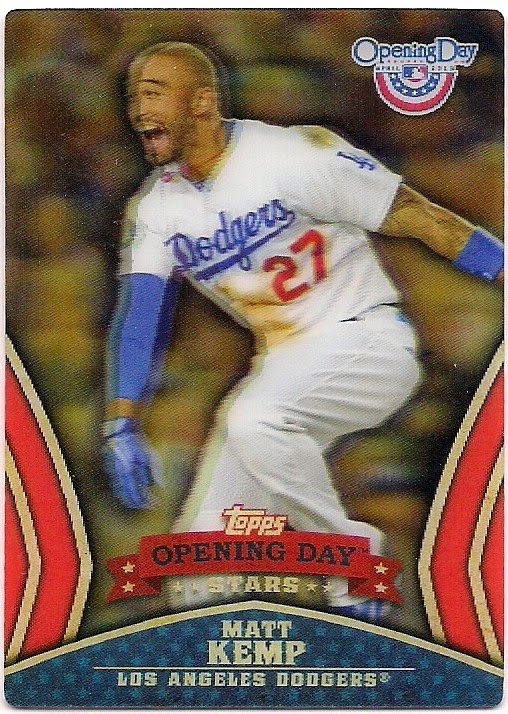 Against the Giants, Diamondbacks and Rockies, that is.

cynicalbuddha said…
When I heard the news, which had been rumors for awhile, I thought I wonder what those Dodger collectors that have Kemp as a major player collection are going to do. I guess it all depends on if you collected him because he was a Dodger or because he was one of your favorite players. If it's the latter I'll assume you're going to keep collecting his cards even though he's in a Padres uni, if the the former there are always tons of cards to collect in his Dodger uni.
December 11, 2014 at 8:00 PM