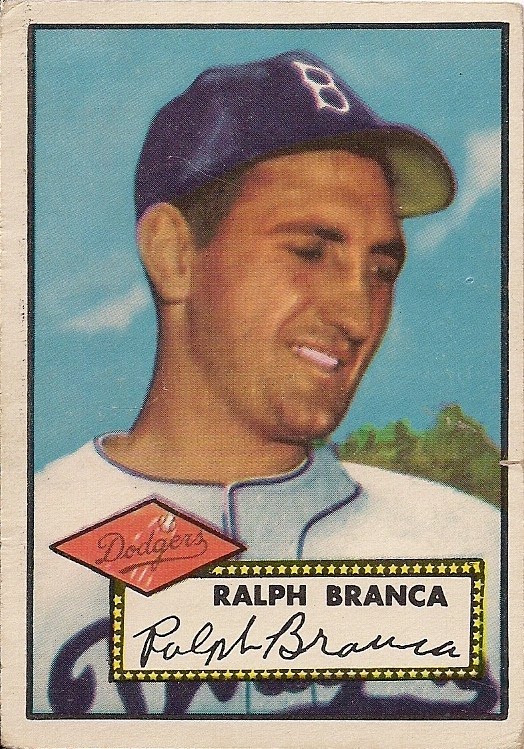 It's yet another chance for renewal. An excuse to forget the past. A dream of becoming a better person.

A new year also offers promise for better card sets. Unfortunately in our current world, where we need to see what's next NOW, we already know what 2015 Topps looks like. We know what 2015 Heritage looks like, too. And 2015 Allen & Ginter. And 2015 Archives. And 2015 Stadium Club. Topps has shown us the future, because we demand it.

In past years, this wasn't the case. There were no bulletins months ahead of time. No advertisements -- at least none that we ever saw. We found out what that year's cards looked like the moment we broke the wax seal on our first purchased pack that January, February or March.

Little did the kids in the new year of 1952 know that a much larger, full-color baseball card set with detailed statistics on the back would be available in the weeks ahead. (Many thanks to Stack22 for supplying this '52 Ralph Branca card to help me illustrate!).

It had to be one of the biggest cardboard surprises ever sprung on the collecting public.

What are some of the other great cardboard surprises?

Well, here's what I think: 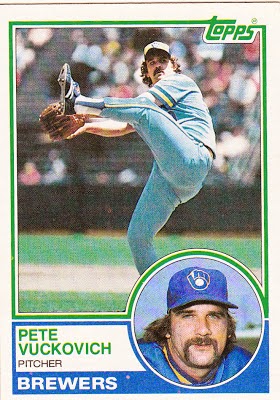 Can you imagine a world without 1983 Topps?

The people who just put 1982 to bed can. I was one of those people. Once I lived in a world that only knew everything right up to 1982 Donruss, Fleer and Topps. Hockey sticks and baseball bats and blurry photos. But nothing newer.

We had no idea what was coming.

The surprise ahead was one of the best-looking sets ever made. Virtually every card featured a large action shot, with the perfect complement of a mug shot inset. It was a riff on the 1963 Topps set, except improved and modernized.

No one could help but compare all sets that came after 1983 Topps to 1983 Topps. And they almost always fell short. 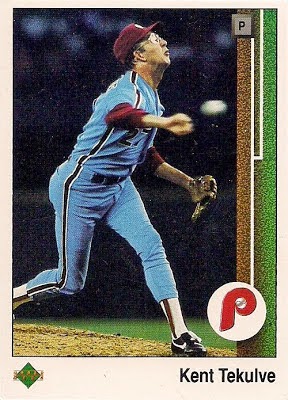 I was a little out-of-touch as a card collector in the late 1980s so it's entirely possible that Upper Deck was blaring the fact that it was issuing a new card set out of a bullhorn on every street corner in 1989.

But on New Year's Day 1989, I had no idea that a fifth card company was about to join the four that we knew (plus Sportflics).  And I had no indication what Upper Deck was until the first time I saw packs on shelves, who knows when that was ('89 Upper Deck was not readily available at my stores of choice).

Upper Deck would change the way people collected cards for decades and continues to leave its mark even after losing its MLB license. Collectors who found Upper Deck in 1989 couldn't help but notice the difference, from the innovative photography to the color photos on the back to the tiny hologram on every card. 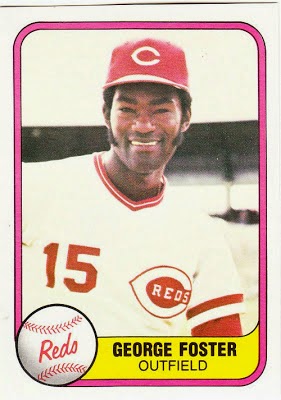 The previous year, I tried to complete the entire 1980 Topps set and I grew sick of seeing those little pennant flags on every card. I came up a few cards short and it was so disappointing that I really needed those few months of no cards (remember the days when you couldn't find baseball cards from October to December?) to recuperate.

I had no idea what had gone on while I was recovering from the 1980 collecting season and even before that. Lawsuits and licenses and unions. Companies had sued for the right to offer card sets for sale, but the news wasn't in my local paper.

Instead, I found the news in the gum aisle at the local corner store. Next to the new 1981 Topps cards were card wrappers that said "Fleer" and others that said "Donruss". We couldn't imagine what this was. But we bought them because it seemed like something kids should buy. And we soon found out that now we had to try to collect three sets instead of one.

You think I thought I was tired of collecting cards in 1980? 1981 was that times three. 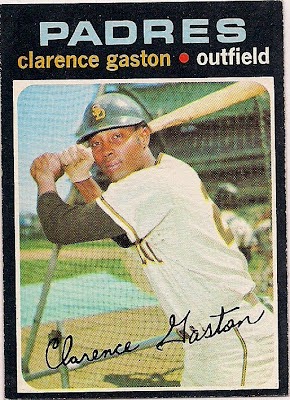 I am sure those who were kids in January 1970 were blown away by the gray bordered Topps set that year. But those borders faded into the background the following year.

Who had any idea on New Year's Day 1971 that these groovy black borders would pop out of packs? And what about all the action photos? Who saw that coming? The early '70s was just one surprise after another because just one year later, the psychedelic tombstone set would make its debut. 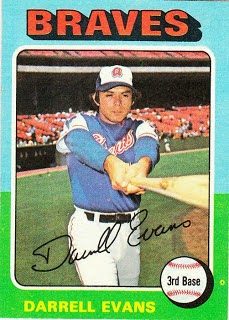 This was my first year buying cards so I'm not the right guy to convey how much of a surprise Topps minis were in 1975.

But I'm sure there were collectors at the start of 1975 who were expecting your average 660-card set just like the previous couple of years. But instead, they received a super colorful set that -- at least in some places in the country -- had a mini version, too.

Perhaps there were collectors out there that hated this development. But I've never found one. And you certainly won't hear me complaining about it.

Anyway, those are just some of the biggest cardboard surprises that have appeared in a given year. I know there are others -- the first autographed cards, the first relics, the first chrome cards, etc.

I hope that 2015 has some cardboard surprises, too, even if we already know what the designs look like. It's the new year! A clean slate! We deserve some surprises.

Anonymous said…
For me, 1988 Score was a much bigger deal than 1989 Upper Deck. '88 Score was on the same level price-wise as the other guys, but Upper Deck cost at least double (maybe triple? I can't remember) per pack. I had very few UD cards, but collected the entire '88 Score set by hand (the first time I had ever done such a thing). Perhaps it was the appearance of Score that made Upper Deck a much lesser story in my mind, even if UD scored the ultimate rookie card with Griffey at #1.
December 30, 2014 at 9:59 PM

Cardboard Jones said…
I, too, miss that anticipation. My daughter, who collects American Girl Dolls, has that same excitement today as she awaits the big announcement tomorrow morning for the Girl of the Year. I guess we're collecting the wrong things, guys.
December 30, 2014 at 10:13 PM

Matt Runyon said…
I remember being the first kid in the neighborhood to bring home the 1976 baseball cards. We used to badger our fathers every day starting in the first week of February to take us to the nearby convenience stores in hopes of being the first to see the new cards.
December 30, 2014 at 10:21 PM

Fuji said…
One of my favorite cardboard surprises was Sportflics. I found some in my local pharmacy and was amazed by the mylar wrapper and the sample card on their display box. I think there were only three cards per pack, but they were more expensive than Topps, Fleer, and Donruss. Looking back... it was my first premium pack purchase and I loved them.
January 1, 2015 at 11:32 AM