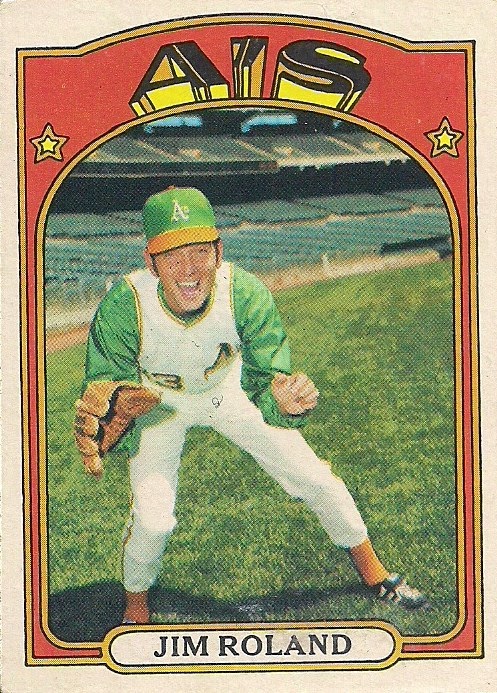 I'm finally getting around to naming a second player as a Legend Of Cardboard. The first selection happened so long ago that I think I need to go over the ground rules again.

A Legend of Cardboard is not what some not-so-clever writer would call Hank Aaron. Sure, Aaron is one of the best who ever played, but he was not a legend of cardboard. He was a legend of the game.

No, a Legend of Cardboard should be someone who is barely remembered by the average baseball fan. He is a player who did not place his indelible stamp on the game, but, gee golly did he ever attract notice with his baseball cards.

And that is why Jim Roland is the next Legend Of Cardboard.

Roland was a starter turned reliever for the Twins and the A's and a few other teams at the very end of his career. He put together a couple of adequate seasons in the late '60s and early '70s. But like most relievers from that time period, he was forgotten as soon as he retired. Unless you're a veteran Twins fan or someone who knew the guy personally, anyone under the age of 50 likely doesn't know Jim Roland.

That's a shame because doesn't his 1972 Topps card make you want to get to know him?

Roland appears so happy -- it is one of the happiest cards that I have ever seen -- that he looks as if he's about to break out into an old soft shoe dance routine. The card wins me over instantly. I am drawn to it and I'm sure kids opening fourth-series packs in 1972 automatically nominated the card one of their favorites. Why, don't ask me, ask him.

The broad smile, the open arms, the green windbreaker under the A's vest-style uniforms, the off-center picture drawing your eyes to the vast empty stadium behind Roland, all combine to make this a memorable card. 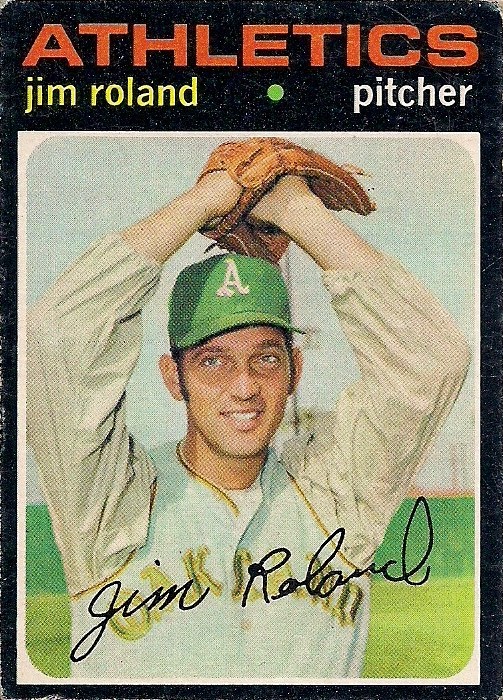 It's your standard photo except for the fact of when have you ever seen a baseball player wearing a white windbreaker on a baseball card?

As a collector of '70s cards, which are filled with players fashioning windbreakers under their uniforms, I know my windbreaker colors. Lots of blues, blacks and reds. But white? This is new. And memorable.

Are there any other cards of players wearing white windbreakers? Possibly. But the only one I know of is Jim Roland. 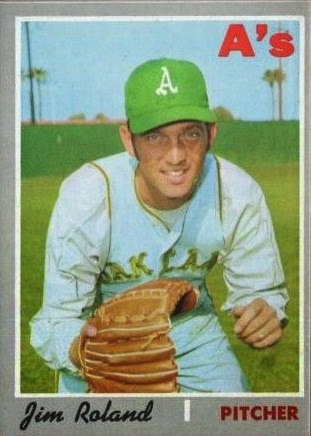 See? There he is again on his 1970 Topps card in his Jim Roland-brand white windbreaker.

Roland's cards immediately preceding the above three are very mediocre. He appears in the 1968 and 1969 set with the Twins in the pitching poses you've seen a thousand times before. There isn't even a white windbreaker to break things up.

Well, when I saw it for the first time last summer, I fell in love. 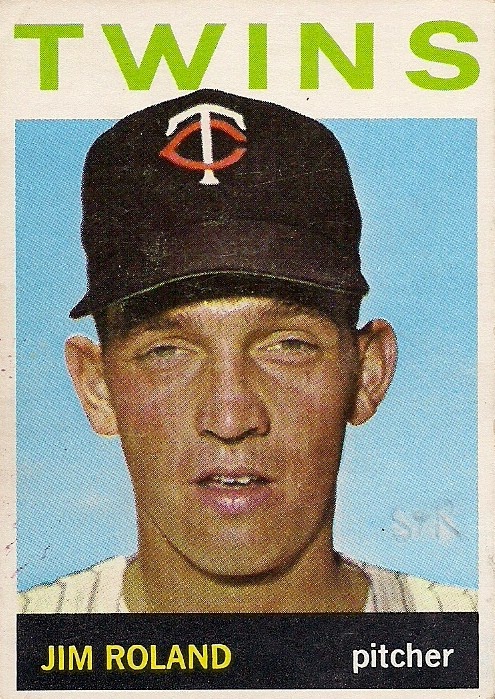 Have you ever seen a player look so witless on his own piece of cardboard?

This is a gem. I'm sure Mr. Roland was a sharp individual right until the day he died all too soon, but this card does not get that point across.

However, it IS instantly memorable. And that's the purpose of the exercise.

Out of Roland's seven pieces of cardboard, three make me sit up and say "Wow! I want that card."

So, welcome Jim Roland, a Legend Of Cardboard.

You can't say you've never heard of him now.

Nachos Grande said…
I would like to nominate Jose Rijo for this... I was going to write about his cards - and even pulled a bunch of them but I never got around to it.
December 1, 2014 at 7:37 PM

Jim from Downingtown said…
That 1964 pose is a classic!

AdamE said…
If we are making nominations I nominate Bill Ripken bassist you know why.
December 1, 2014 at 8:34 PM

Jordan said…
Reminds me. Every Topps card of Garrett Atkins as a Rockie features him smiling, even if it's not even a closeup. Every one, you can clearly see an incredibly white smile peeking through. And yet the moment he's traded to the Orioles, he stops smiling.

AthleticGigantes said…
I wish I could say that I remember Roland as an 8 year old especially since I grew up in Oakland and this was the year I discovered baseball and baseball cards! Given that Roland only pitched 2.1 innings for the Swingin' A's not too many people can blame me. I don't remember this card either during a trade session with friends on the playground but none the less it magically takes me back to those days. Did anyone notice that Topps used pictures from the same photo session for the 1970 and 1971 cards? I've not seen pictures of other A's players using a white wind breaker in my A's memorabilia. Cool.
December 2, 2014 at 2:32 AM

Anonymous said…
After Parks and Recreation, Legends of Cardboard is my most favoritest series.
December 2, 2014 at 8:31 AM

Ana Lu said…
I might me smiling happily in the first card but the last one is the gold one! Totally in love right now.
December 2, 2014 at 8:46 AM

jacobmrley said…
Maybe it is too obvious for your obscure-minded exercise, but I would like to nominate Lowell Palmer for inclusion in this series.
December 2, 2014 at 6:01 PM