Turn to your right, Mr. Carlton 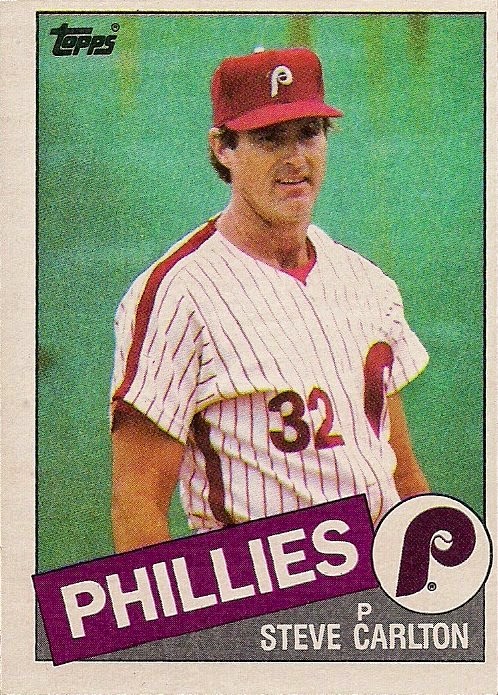 So, writing three blogs is kind of pain in the ass. It requires quite a bit of devotion and sacrifice and I would be lying if I said I didn't think every now and then about returning to just one blog.

But if I wrote just one blog, I'd be eliminating a considerable source of material. I get ideas, man from the other two blogs. Maybe they're not the most fantastic ideas -- it's not like receive a Christmas break, you know -- but they amuse me.

Carlton, if you remember his greatest days, was one of the most prominent players in the major leagues in 1984. His team, the Phillies, had just appeared in the World Series the previous year. Meanwhile, Carlton enjoyed status as both a solid star of the game and one of the all-time greats, as he was climbing the list of the most prolific strikeout pitchers. He was everywhere.

Yet, he wasn't the most available player in baseball. I don't know what his relationship with Topps was but he sure wasn't talking to the media then.

Perhaps Topps wasn't able to get a lot of pictures of Carlton that year, which would explain what you are about to see.

In 1984, for whatever reason, Topps issued a mind-numbing 18-card subset addressing MLB's active career leaders in a number of categories. I've always regarded this as one of the dullest subsets of the 1980s (I know this statement will automatically cause someone to comment how much they love it and how they met their first girlfriend through this set and how it saved their nephew from a burning building, but it's still dull). It drones on and on  -- much like this post. 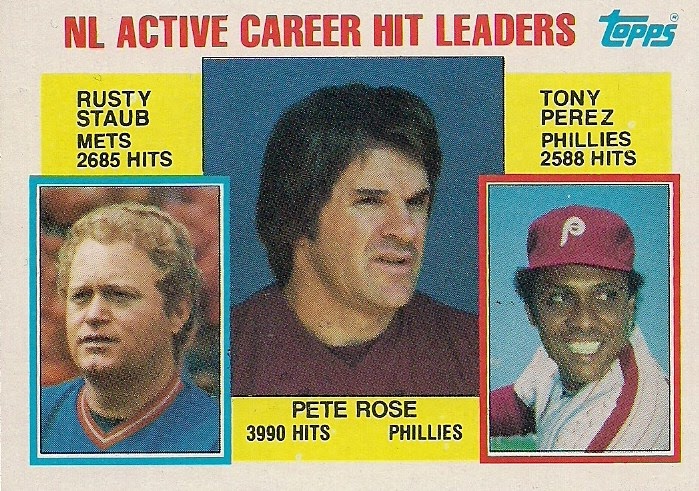 That's the basic format, a Olympic pedestal design with a whole lot of mug shots staring back at you. Oh, and lots and lots of yellow. Bleah. 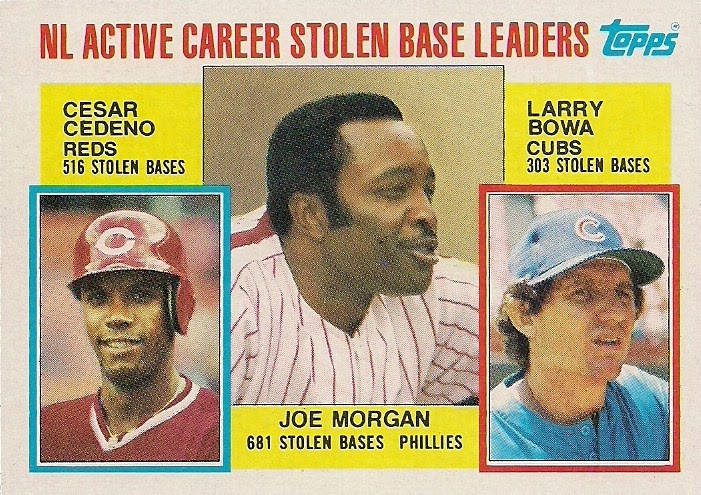 Although it's nice to get an extra card of Cesar Cedeno, or Larry Bowa as a Cub, there is a lot of repetition in this set. 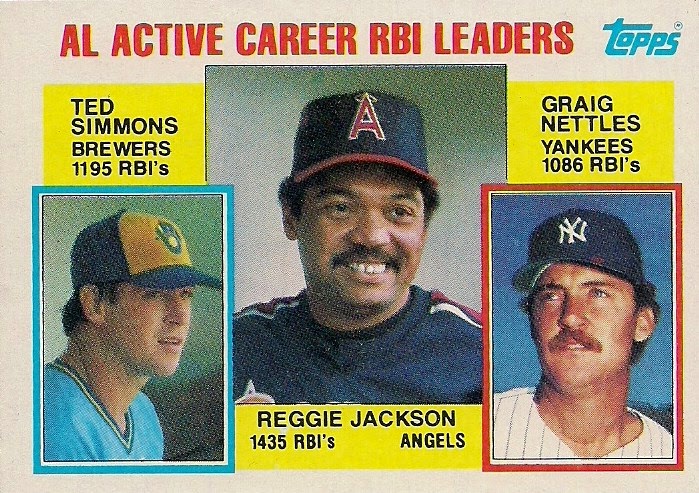 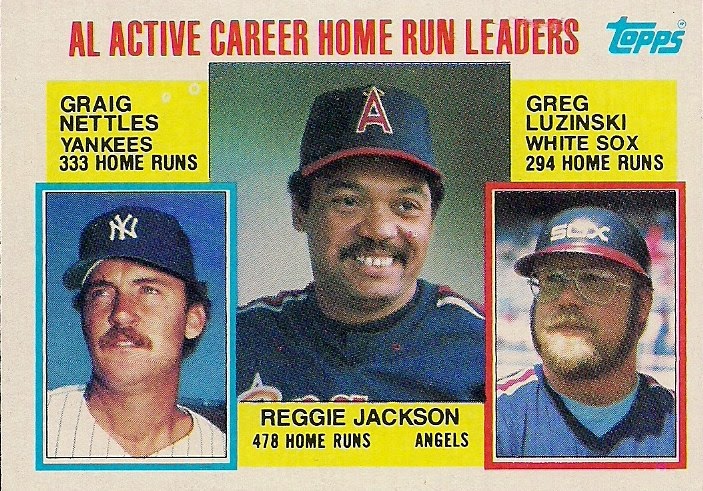 Perhaps the most notable repetition in this subset involves Steve Carlton. He appears in three successively numbered cards in this exact order:

That's a whole lot of Carlton turned to the right (and Seaver facing forward).

But that's just part of it.

Carlton appears quite a bit in other parts of the 1984 set, because like I said, he was both an All-Star and career standout. 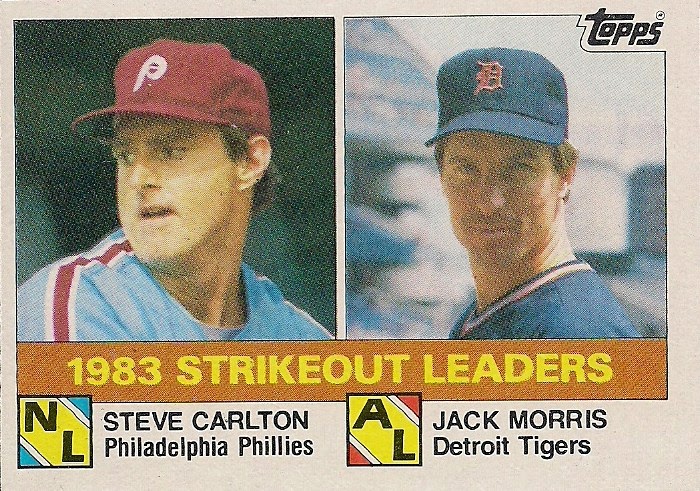 and a season highlights card ... 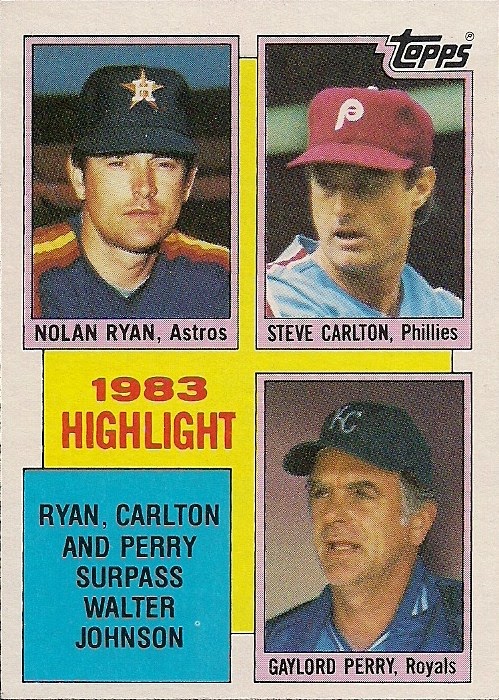 Now let's go to the cards in which Carlton is the only player featured. 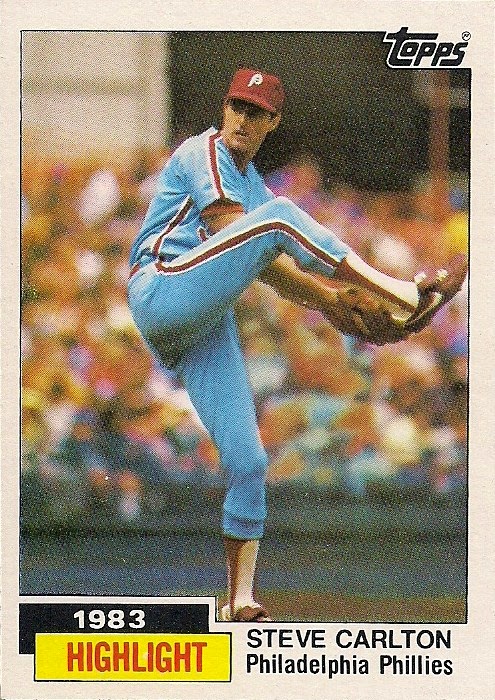 Here he is on another highlights card in the middle of his wind-up -- probably as he was in all of those head-shot photos too -- turned to the right. 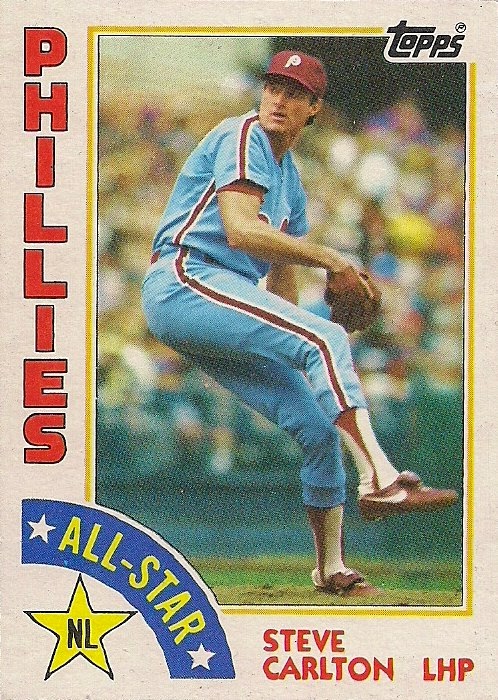 Now the All-Star card. And the LHP is facing to the right again in mid-windup.

OK, now all that's remaining is Carlton's base card.

Let's see what he's doing there. 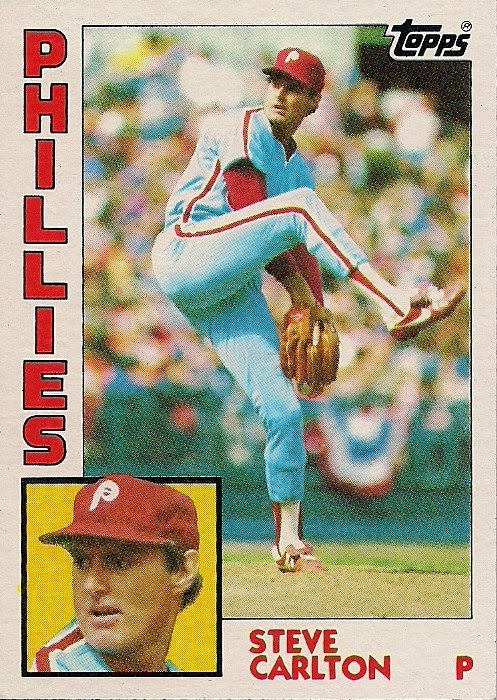 Why am I not surprised?

Even on the inset photo, he's turned to the right.

So, if you've kept track, that's nine different images of Carlton that very well could be from the same game, the same inning, the same wind-up (note he's in a road uniform in every photo).

I doubt that's the case, at least as far as the same wind-up. But it's obvious that Topps had difficulty getting multiple pictures of Carlton that year, or at the very least, they could only shoot him in action.

It probably wasn't the greatest time to decide to run an 18-card subset on active career leaders. 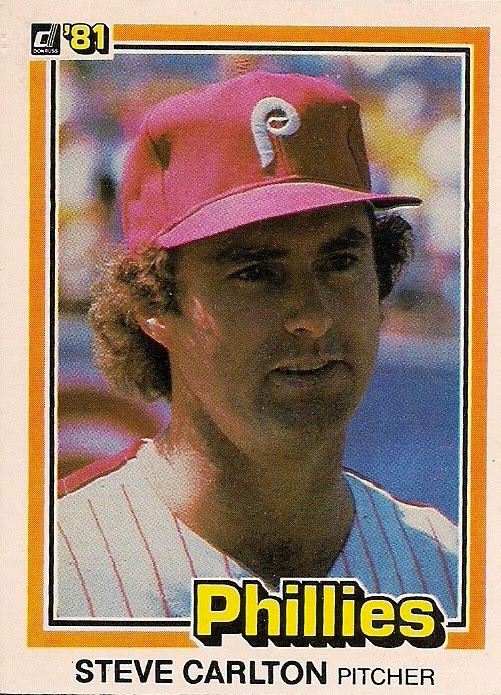 Oh, sure, now you turn to the left.

Anonymous said…
The base card is definitely a different inning at least than the Highlights and All-Star...SLEEVES!!!
December 18, 2014 at 7:39 PM

deal said…
I am the person that loves the Career Leaders set. Since it came the yr after the Wheeze kids - 4 Future HoFs Carlton, Schmidt, Perez, Morgan Plus Rose at the end of their careers the subset is loaded with Phillies.

I have also always wanted to post about the1984 Carlton Trio. Thanks.

Fuji said…
You've got some amazing eyes. I f'n collect Carlton and I never noticed this. Anyways... the 1984 Topps Steve Carlton base card is such an awesome card. Yeah it would have been nice to have him look forward for his portrait... but the beautiful action shot makes up for it.
December 20, 2014 at 10:38 AM

View From the Skybox said…
I was working on my '84 set last night and also noticed how dull that "Active Leaders" subset is. For one, it takes up nearly an entire binder page front and back (yes there are more than 18 cards, but that's how they landed chronologically). No subset should go on that long. Add to that that the same photos of players are used in consecutive cards, most noticeably (for me) that dorky Nolan Ryan glamour-shot. The design is bleh too, but that kind of sums up a lot of '84 Topps.
December 20, 2014 at 2:11 PM