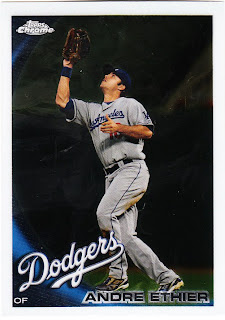 I am in the midst of questioning my modern card-purchasing habits, as you may have gathered by some of my recent posts.

What I would like to do is adopt a hit-and-run policy for next year's product. That is, buy a few packs of base, Heritage, A&G, etc., to get an idea of what is involved and to satisfy the occasional pack-opening urge. But that's it. I'm reasonably sure that is what I'm going to do.

What I would also like to do is prevent myself from wasting gas in order to buy cards.

As you may know, current cards are basically available now only at large department stores, unless you're the lucky sort surrounded by card shops. While there are two Wal-Marts and a Target within 7 miles of me, they're not conveniently placed. The closest Wal-Mart and Target each sit at the end of a long strip of road filled with fast food places, grocery stores and chain outlets. They are at the end of this road. Not the beginning.

That means if I want cards (and I would never go to one of those stores solely for cards. Heh, what kind of fool would do that? How desperate do you think I am? Heh), I have to drive past all of those stories and all of that traffic for five miles just so I can get a blaster of junk. All the while I am wishing that the two drug stores that are practically around the block from where I live would sell cards like they used to do not even 20 years ago.

So, yeah, I think I'm done being the modern card's monkey.

I will sample modern cards on my own time from this point forward, and avoid the heartbreak of a long distance relationship.

I know some of you have already figured this part out. Good for you.

Meanwhile, the latest chapter of my decision to forgo the inconvenience of modern cards has come in the form of Topps Chrome.

I really like shiny. You know that. I also kind of like the value packs that Topps is waving in front of the faces of collectors who like shiny.

So I've bought a handful. Not a lot. 'Tis the season for saving, you know. Just more than I should.

But all I truly care about are the Dodgers, because I'm not collecting the set.

I've pulled one Dodger. One. That's disgraceful considering the stack of Chrome that's sitting on my desk right now.

It's called trading with bloggers. Perhaps you've heard of it.

I was able to land the Andre Ethier chrome card from Marie of A Cardboard Problem in exchange for the way too many Yankees I've pulled out of Chrome already. It just happened to be my 100th Ethier card, by the way.

Also, Brian from Play at the Plate had no trouble pulling Dodger Chrome cards, so he sent me these: 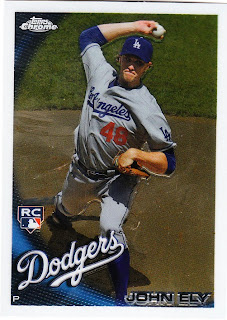 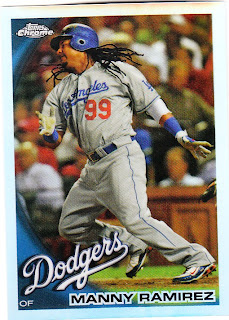 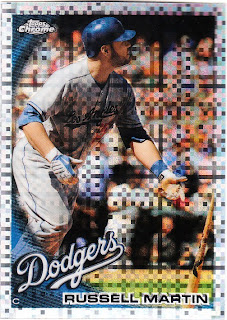 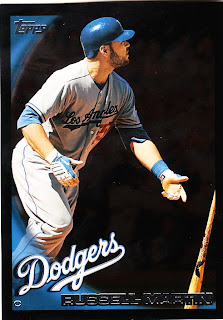 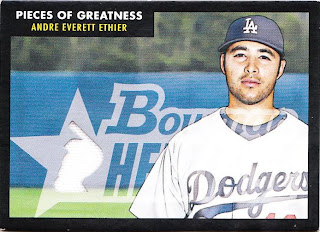 Sweet Mother of Shiny! Them's some great cards. I remember when Brian pulled the Ethier card. I made a crack about the jersey piece flipping off Ethier. It still looks that way to me. But I'll gladly take the card.

Lastly, I worked a deal for more shininess with Jon of Community Gum.

His note said "enjoy the chrome progression," because the 3 cards were a base Chrome, a refractor and a blue parallel.

Unfortunately I can't enjoy the chrome progression because the dog got ahold of one of the cards. It fell on the floor as I walked into the house.

I wish I would have scanned the remains to show here. He chomped through the top loader and everything. But I already threw it out.

Fortunately, it was the Ely card, which I already received from Brian.

Here is the rest of the progression: 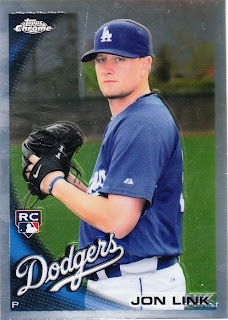 I never thought I'd ever have a Jon Link card. He's the other guy the Dodgers got from the White Sox in the Juan Pierre deal. 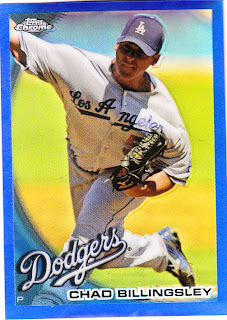 That's the prize of the bunch. Dodger blue refractors rule. I think I might have said that before.

So, that's how I'm getting my Chrome Dodgers, through the mail.

I just might be getting the majority of my cards that way from now on. It's the kind of long distance relationship that I can handle. One that doesn't involve stop lights and crappy drivers. And I won't hate myself in the morning.

But if that drug store around the corner suddenly gets cards, forget everything I said.

Nachos Grande said…
I've pretty much been relegated to buying all my packs/boxes off of the internet since I only have Wal*Mart within 50 miles of me...and that Wal*Mart stuck the cards way back in the toy section - and they only have ONE end of ONE lousy row with cards, most of which are either crappy Upper Deck base cards or even crappier repack boxes.

PS: I think you wanted an unclaimed card from me from my recent group break - which one was it? I think the email got lost in my inbox (apologies for that).
October 26, 2010 at 11:28 PM

Play at the Plate said…
For the record, I in no way intended that to appear as if I was flipping you off. Or did I...?

Jason C. said…
I have a Topps chrome orange refractor of Matt Kemp I can send your way for any chrome orioles you have in your stack.
October 27, 2010 at 12:52 PM