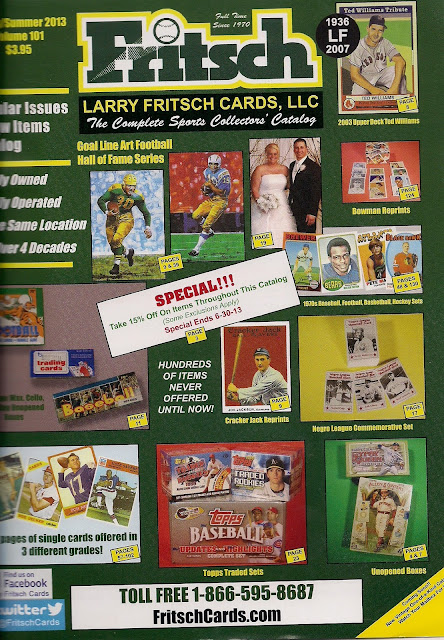 (Disclaimer: This is not an endorsement of Larry Fritsch Cards. This is merely another tired nostalgia piece from night owl).

The Larry Fritsch Cards catalog arrived in the mail the other day.

It shows up maybe a couple of times a year. But this time it filled me with such joy and nostalgia that I had to announce it on Twitter.

What I received back in return were a couple of nods from doddering folk like me, a couple of "huh?"s, and mostly silence. Twitter isn't the right place for something like this.

Before online shopping, before Amazon and ebay, poor ancient folks like me would run to mail-order catalogs for cards. There were several places to find them, but for me, Fritsch was the easiest place to find them.

Fritsch cards is where I bought my '75 George Brett rookie. It's where I grabbed my first few 1972 Dodgers. But I would only order a few cards at a time. It's all I could afford. Fritsch was always too expensive for my tastes. 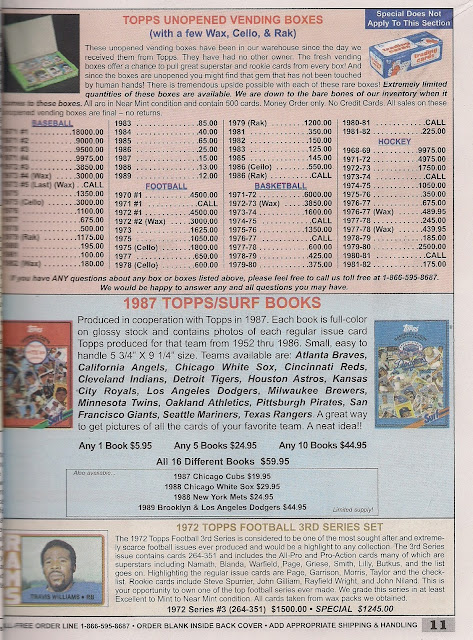 So instead, I would plop down $5.95 for a 1987 Surf Book of the Dodgers and be happy with that. I've gotten my money's worth. I consult that Surf book often. 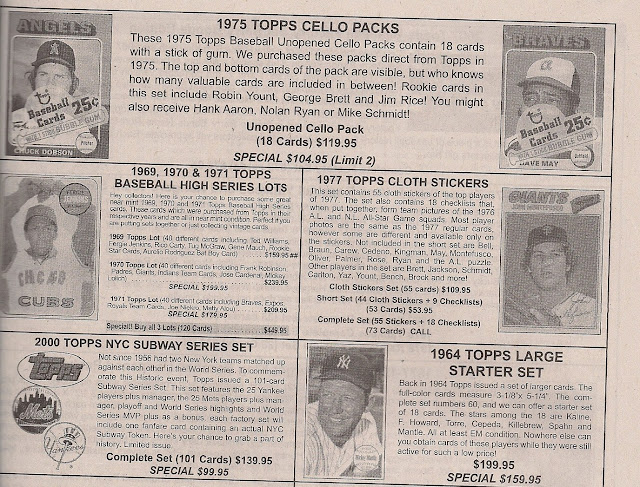 It sure is tempting to revisit the ritual of opening a cello pack of 1975 Topps as I did back when I was a 9-year-old. But $120 for 18 cards of joy sounds pretty obscene. 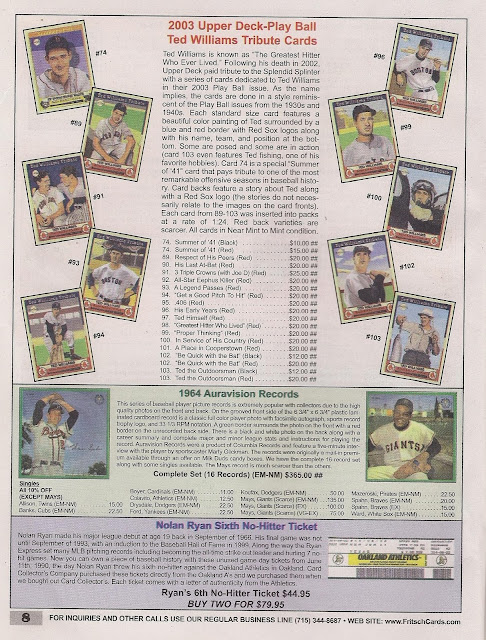 Even without being able to afford much, the catalog has always been fun to look through. Who knew Upper Deck made a Ted Williams Play Ball tribute set in 1993 (edit: 2003)? And what are 1964 Auravision Records? (I think that Nolan Ryan sixth no-hitter ticket ad has been in there since the day after Ryan's sixth no-hitter). 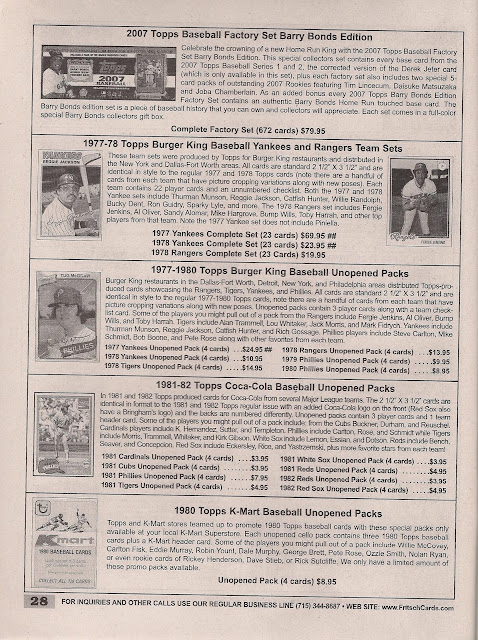 Obtainable Dream Page? That would be this one.

No, not the Barry Bonds set. I'm talking about the desire of every late 1970s collector. Burger King and Coca-Cola sets. Unopened packs! I read every word on pages like this. 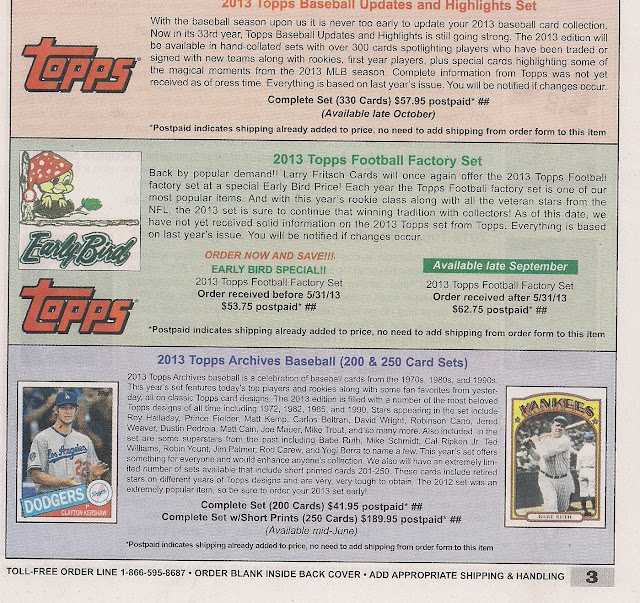 There is plenty of the very newest, too. I don't think I've seen that Kershaw Archives card advertised before.  The back advertises 2013 Allen & Ginter. Special for $95 a box. Not bad. 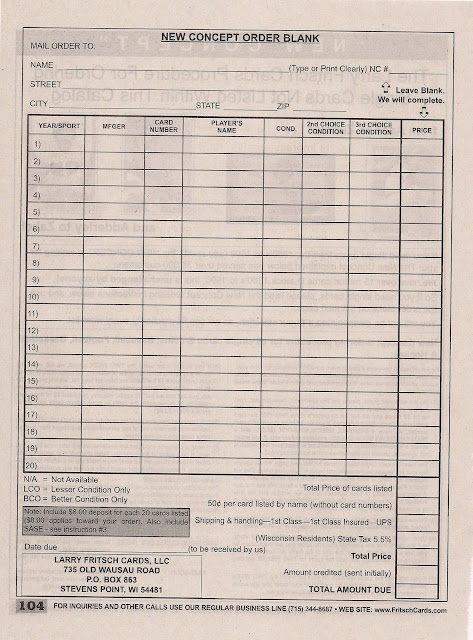 But this is what I utilized the most often in the 1980s and even into the early '90s. When I was first trying to complete Dodgers sets from the late '60s and early '70s, I'd order them with this form. I'd write down the cards I wanted with my choice of condition and mail it off. Fritsch would send it back signifying whether they had each card (in most cases they did) and the cost. Then you sent in your payment for the ones you wanted.

It seems clunky by today's online standards and is definitely a lot more expensive. But there was a certain charm to it and I looked forward to getting the mail twice. Once when the form came back and then again when the package showed up. 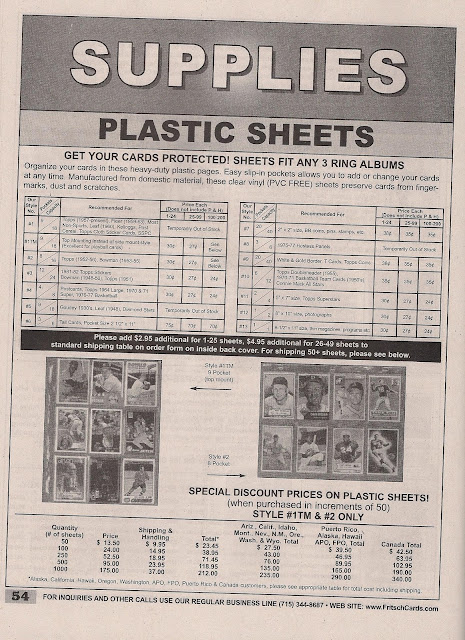 Each catalog is separated by sport and there is also a section for supplies. In the past I have ordered sheets and binders. This is the place where I once saw '75 mini pages. It's rather amusing that they have been temporarily out of stock of the most common page type for at least the last 6 catalogs. 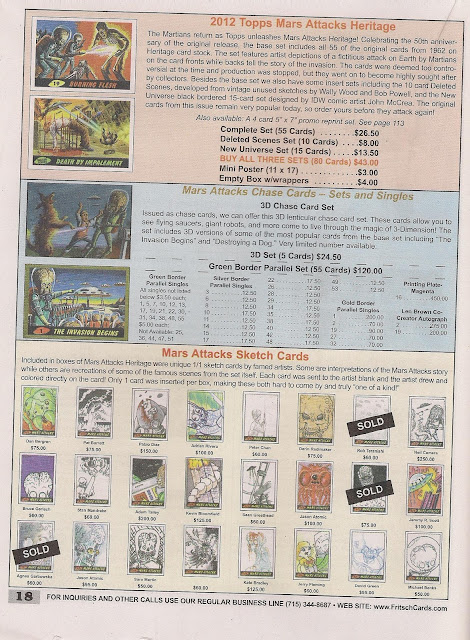 Even by today's standards, this catalog does pretty well with variety. Mars Attacks Sketch Cards? They're here. Just about every reprint set? They're here. 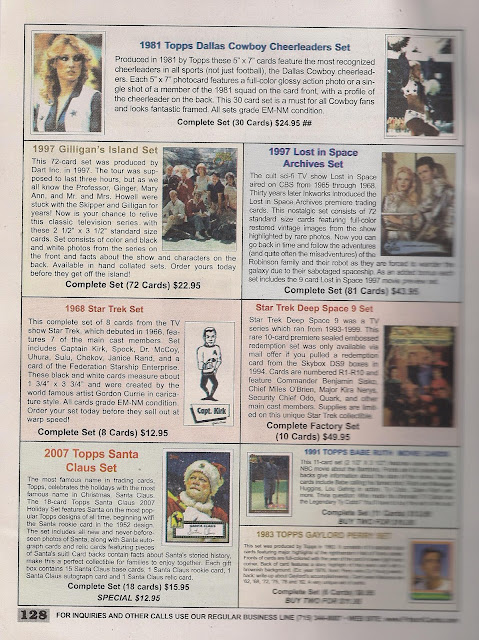 There are plenty of nonsports sets. In fact, there is one here that I ordered way back when.

Yup. What teenage boy didn't love the Dallas Cowboy Cheerleaders when they were at their absolute most famous.

Five-by-Seven glossies of all the cheerleaders? Sign me up!

I totally remember the cards of both girls you see pictured here in their super-80s makeup. But I have no idea what happened to this set. It's hard for me to believe I got rid of it willingly. 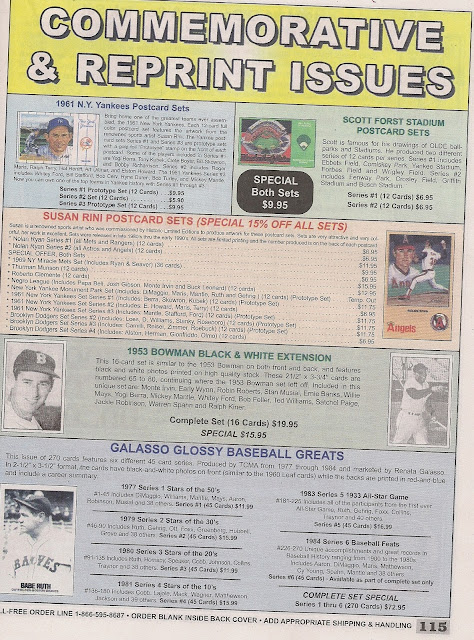 I found myself leafing through this catalog wishing I could find something cheap so I could order something for old-times sake.

And I did find a commemorative set that I haven't seen anywhere else that is very cheap. I think I will actually order from Fritsch Cards for the first time in ... geez, it's got to be at least a dozen years or more.

And I'll wait by the door and my heart will skip when I see the return package.

So, that, kids, is what a mail-order catalog is like.

Stop looking at me with your pathetic face.

Commishbob said…
The Fritsch catalog was the best thing around for a long time. I bought some TCMA sets thru him. Then I started finding better prices in the hobby publications like BCN and SCD and discovered local card shops.

I downloaded and scrolled thru one of these about a year ago, just for fun. If Fritsch doesn't sell it, it probably doesn't exist.
March 29, 2013 at 3:40 AM

Laurens said…
I liked the novelty of Fritsch selling a certain kind of men's magazine back in the late 1990's perhaps - even if there was no pictures, just a list of what was available.
March 29, 2013 at 3:57 AM

(For those of you who don't know what I'm talking about, I'm acknowledging the reference Night Owl made in the subject line... or at least I hope I am.)

Man, I must've spent hours and hours poring over the Fritsch catalog and others like it. For some reason... maybe the prices... it never occurred to me to actually order from the catalog, it was just another form of looking at the Sears Christmas Catalog... I want that, and that, and that... That would be cool, but OH! I WANT THAT!
March 29, 2013 at 6:50 AM

BaseSetCalling said…
Just be careful around any cans now.

Fuji said…
Huge fan of Fritsch catalogs... they're the best bathroom reading material around. Hopefully I receive my catalog soon.

Huge fan of those Burger King & Coca-Cola Topps sets myself. And those Auravision records are great collectibles. I picked up a Koufax at the flea market a while back. One of the coolest oddballs in my collection.
March 29, 2013 at 10:19 AM

cynicalbuddha said…
Oh yes, I'm sure my catalog will be in my mailbox when I get home today. I've been on the Fritsch mailing list forever, even though I haven't bought anything from them in years. But I did go to college in the town they're based out of..Stevens Point, Wisconsin. I remember looking up their address and doing a drive by years ago. No store front just a none discript house on a tree lined street. I still don't know how they can compete in this day and age of the internets and ebay, but I'm still glad they're there, even if their prices are always on the high end. I use to get all my Packer police sets from them back in the day and I think that's why I'm still on the mailing list. Fuji's right too get bathroom reading, at least until my new REA catalog gets here next month!!!!
March 29, 2013 at 12:49 PM

night owl said…
@Laurens ~ The listings are still there.

@shlabotnikreport ~ You acknowledge correctly. Millions of people look at this catalog everyday.
March 29, 2013 at 12:53 PM

AdamE said…
A guy like me would know there was a Ted Williams Upper Deck Tribute Set in 2003 (not 1993). It isn't actually a set in itself it is high number short prints from 2003 Upper Deck Playball. I pick one up when I see one priced right. They have the best artwork of any painted/drawn set outside of Masterpieces. M7y favorite is the one with the fish, it was the very first one I bought.
March 29, 2013 at 1:53 PM

sg488 said…
We used to get his catalog in the 70s,it was about 50 sheets stapled together.My friend and I would laugh at how overpriced everything was.Anything could be found cheaper in SCD or card shows(not to many back then ).Still cant beleive Fritsch is still in buisness today with all the compition there is.
March 29, 2013 at 4:57 PM