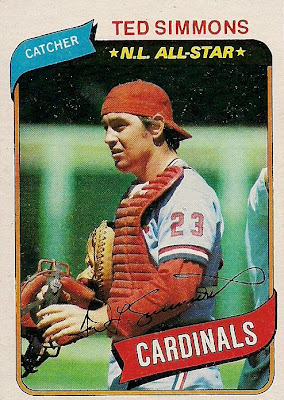 I kind of gave the '80 Topps all-stars the shrug-off in this countdown. Only the Nolan Ryan card made the top 20. In my view, the 1980s all-star cards just can't stack up with the earlier all-star cards.

I don't dislike the 1980s all-stars. In fact this Ted Simmons card is unbelievably fantastic. It's just that by 1980, I was a teen and a six-year veteran of collecting cards. The all-star players were no longer mythical gods to bow down before as you gave thanks that you were deemed worthy to obtain their card. Instead, they were cool finds that got me a step closer to completing the set. "YES! #450! The George Brett card! I NEEDED that number." Functionality had replaced mythic wonder.

This countdown is more about mythic wonder than functionality.

But really you could put the Simmons card at No. 1 and you wouldn't get an argument from me.

On we go with my haphazardly thought-out countdown: 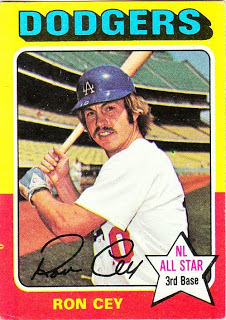 What's this? My favorite card of all-time ranked just fifth? How does this make sense?

It doesn't. But I'm trying to be at least a little bit objective here. I'm biased enough on everything else on this blog. The Cey card is fantastic for every reason I've gone over repeatedly. But it's not quite as fantastic -- objectively speaking -- as the cards that I will show next.

That said, The Penguin could whip the next four guys with one flipper tied behind his back. 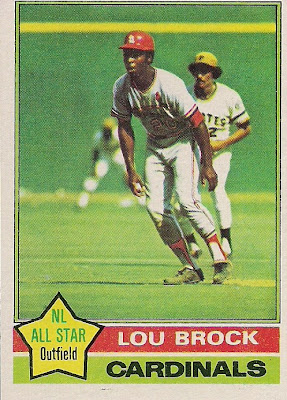 For whatever reason, there just weren't a lot of "players on the basepaths" shots on cards 35 years ago. There still are relatively few, when you compare them with other kinds of action pix. Add that to the fact that this photo sums up Brock perfectly, particularly for the time, and this card is one of my favorites ever, all-star star or no.

As for the Pirates guy behind Brock, I believe I figured it out once before. In fact, I may have figured it out incorrectly and then someone corrected me, or I corrected myself, or ... hell, I don't know, I just don't have time for all that, figure it out yourself if you're that fired up about it. 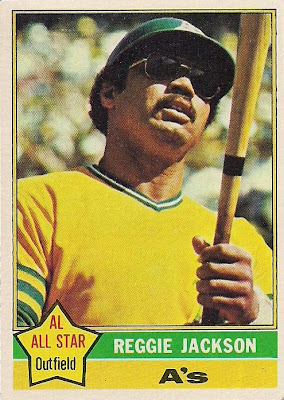 This card rights a wrong in the 1975 set. As you know, Jackson did not receive the all-star treatment in the 1975 set even though he was a starter in the 1974 game. It pains me to admit that because I look at the 1975 set as the most perfect set of all-time. It can do no wrong.

But Topps sure made up for it with this card. If this card does not say "1970s superstar funkgod of slugdom"   then I don't know what to tell you. This was before Reggie become a Yankee and completely lost his cool factor. 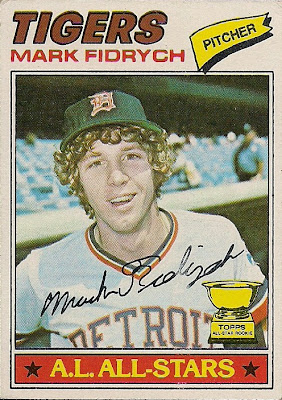 If you ask me, too much has been made of Mark Fidrych's one-year-wonder, hobbled-by-injury career. Sure, he could have gone on to achieve great things in the major leagues.

But he had already achieved something great. Something almost impossible. He is on a card with both the all-star banner and the rookie cup. He got both. In his first year of showing up on a bubble gum card. Sports fans, that is more impressive than winning 20 games, batting .400, capturing the World Series, pitching 25 years in the majors, being elected to the Hall of Fame, having the most beautiful wife and adoring kids that make all your neighbors positively sick ... COMBINED.

Just try to go out and do the same. Without using photoshop. 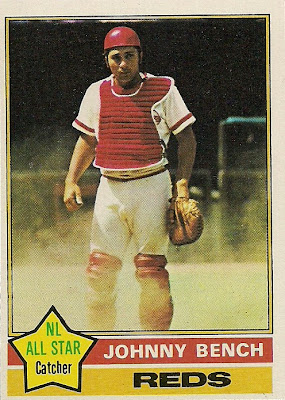 When I see this card, I hear the theme music to "The Good, The Bad and The Ugly."


Then I hear the "Lonely Man" theme to the end of the Incredible Hulk TV show.

The ability of this card and photo to combine both with an all-star logo makes it my favorite all-star card of the golden age.

Once again, I would love if Topps returned to that age and put an all-star notation on the base card of the all-star starters.

No more all-star filler as we see today.

carlsonjok said…
Whenever I see that 1976 Bench card, I hear Vince Guaraldi.

gcrl said…
the 1980 roy smalley card is one of my favorite all-star cards, but i understand the approach you took to this list.

while i was happy that topps went to separate all-star cards in 1982 (so that steve garvey wouldn't have to suffer the indignity of having no all-star banner on his base card while pete rose got the glory on his) i do wish they would go back to the way it was done from 1975 through 1981.

Nick said…
Your top two are probably the same as mine, although I probably would've put "The Bird" at #1.

It's Jackie Hernandez and the photo is probably from 1973.

majpasqua said…
The 76 Brock card is my favorite card of all time!!! I remember as a kid seeing it in a hobby shop in the Exton Mall and saying " I must have", but I didn't have the dough. (I think it was two bucks!) Went back the next week and there it was. Mine for the taking. I thought that was Frank Taveras behind Brock.
March 15, 2013 at 4:54 PM

Dave said…
I've never seen the 1976 Brock! Another anonymous Pirate-in-the-background I don't own! Defiantly has to be Jackie Hernandez. The Roberto Clemente #21 memorial patch on his left arm dates the photo from 1973... and if memory serves me right, the only Pirates who wore a number ending in "2" was Hernandez and #22 Richie Zisk. And that is NOT Richie Zisk covering second. Funny, Topps recycled another 1973 photo on Richie Hebner's 1976 card too.
March 15, 2013 at 7:02 PM