Not gonna fight it no more 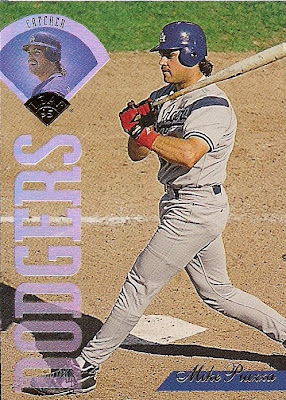 I never thought of myself as a Piazza collector. I don't really player-collect, per se. And Mike always had so many enthusiastic card fans that there was no way I could consider myself one of them. Not that it's a competition, of course.

Even as my Piazza collection grew and grew and grew, I resisted saying that "I collect Piazza." The phrase sounds weird anyway, like I'm going to pull up to his home with a dump truck, lower the dumper thing, roll Mike into the back and haul him off to the collection. (I'd never do that, Mike. Please don't sweat it).

If I collected anything player-wise, it was Cey or Kershaw or Koufax or Hershiser or Nomo. Yup, definitely, Nomo, because that's the player that appeared on the most cards in my collection.

Cards on Cards sent me nine Mike Piazza cards I didn't have. Totally out of the blue.

And now he's gone and done it.

I now have more Mike Piazza cards than I have cards of any other player.

Don't ask me the total, because I'm almost positive that it is wrong.

Let's see some of those disturb ... er, lovely cards. 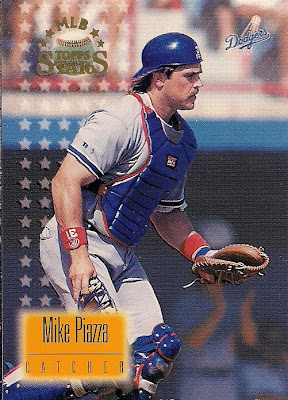 Here is Mike as a Star. A Topps Star. 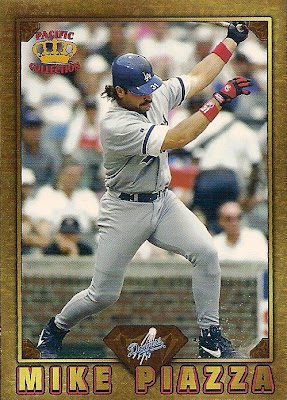 Here is Mike on Pacific. Which automatically means he speaks Spanish. 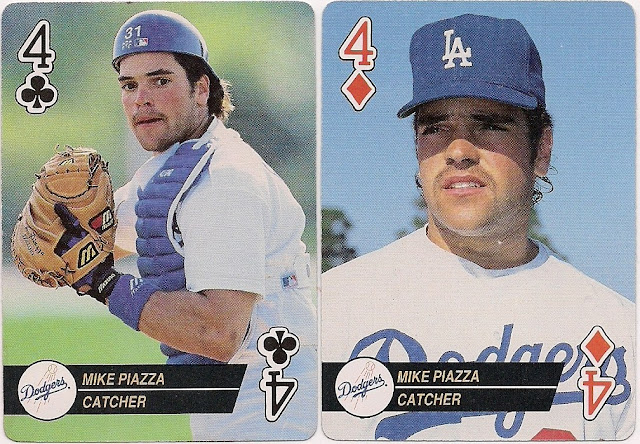 This is Mike coming up Aces. Or Fours. 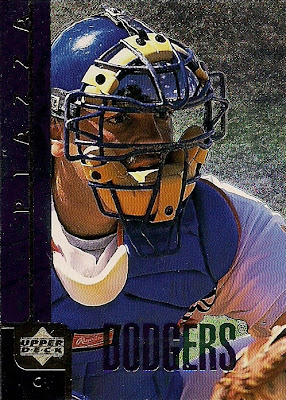 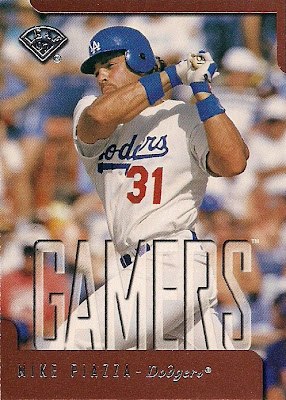 Mike as a Gamer, which always gives me flashbacks to my high school baseball coach during tryouts when he'd proclaim someone a "gamer," which meant "good gosh that kid has no talent but he ran hard anyway." 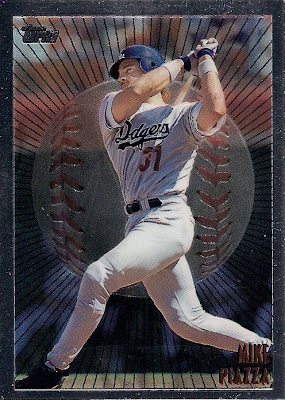 A Finest Mike with a ball rising behind him. This reminds me of the Peanuts comic in which everything Charlie Brown sees is a baseball, including a baseball rising in the sky like the sun. 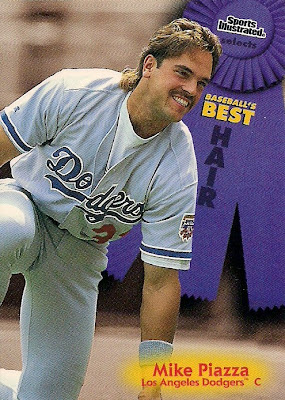 And this is the best Mike of all. This is what I missed by not collecting in the '90s. Apparently Sports Illustrated was handing out Best Hair ribbons. On the back, SI calls Piazza a "hair crazy player." I am now embarrassed for everyone who collected in 1998.

Add all those cards up and you come up with a number in the high 300s, almost 400. It's a number true Piazza collectors would spit upon, but it's still more cards than I have of any single player.

Which means, I guess, that I accumulate Piazza cards very well. Whether it's actively or passively.

I'm OK with this. I'm not going to fight it like I once did. Besides, I expect Kershaw to surpass everyone in two or three years anyway.

Does this mean you can see Piazza added to the "Players I Collect" page?

Too many cards to type.

dayf said…
One of the stranger moments in my life is when I realized I had more Chipper Jones cards than Greg Maddux cards.
March 29, 2013 at 8:46 PM

BASEBALL DAD said…
It's always better after you admit it.

For me there's no doubt,it's Thome.

Sport Card Collectors said…
I have this same problem. I have more cards of other players or teams than I do of the ones I collect. Nice collection. I am a huge 90's card fan.
March 30, 2013 at 6:10 AM

madding said…
The nickel and dime boxes at card shows I go to are almost always chock full of '90s stars where they once probably tried to fetch at least a buck a card. I never mind scrounging up a pile of Piazza cards because so many people (that have blogs, anywasy) seem to collect him.