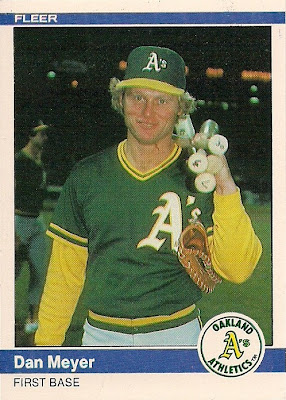 Dan Meyer is carrying 19 home runs in a single hand on this card.

The numbers on the bats that he is holding correspond with the uniform numbers of the players on the 1983 Oakland A's. No. 30 is starting catcher Bob Kearney. He hit eight home runs in '83. No. 3 is designated hitter Jeff Burroughs. He hit 10 home runs in 1983.

No. 7 is Dan Meyer himself. He hit one whole home run in '83. I can see why he grabbed the other bats. Maybe some slugging would rub off on him.

But the reason this card is here, other than it is an awesome night card, is that the other day on twitter people were ranking the 1980s Fleer sets in order of preference.

This is an everlasting fun little exercise, so I shall do it here for posterity:

I don't think Fleer ever really mastered a set during the 1980s, but I sure do miss them.

Nick said…
My top two are the same as yours, I've always thought that '84 was Fleer's finest moment.

Once a Cub said…
Is that a really a 3 on the bat? Looks more like a 6 with an underline (to differentiate from a 9)?