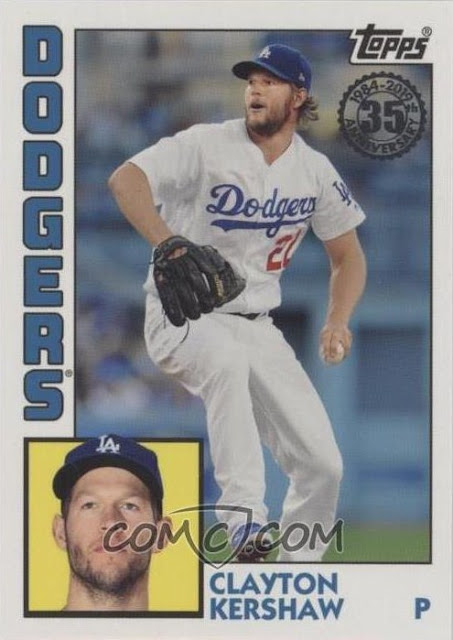 A year-and-half ago I wrote a post about attempting to find a card of Clayton Kershaw in every Topps flagship design, from 1951 to the present. It was my spin-off on his quest to do the same with the now-retired Joe Mauer.

At the time of that post, I had compiled 38 of the Topps flagship designs bearing Kershaw's image.

Since then, obviously, I've added a 2019 Topps design to my Kershaw quest. I also have placed the above card in my COMC cart because it shows him on the 1984 design and I still haven't landed one of those (gee, I wonder why, make a few 100 more insert series, Topps!!!)

But even though the '84 design isn't quite in my collection, I've still managed to add the following designs since I wrote that original post:

That's pretty good, considering I haven't been trying all that hard, other than simply wanting every Dodger card I can find.

So let's go through the years again with every design that I own featuring Kershaw. Then I'll whittle down the list to what's left.

Phew! That was a lot of scanning.

But that gets me to 44 different Topps flagship designs for Kershaw. It will be 45 when the 1984 design arrives.

As you can see, some of the cards don't exactly replicate the original flagship design (looking squarely at you, 1978). I could have mixed it up even more by adding some more parallels and other wackiness. But if I can tell what design is being referenced then that's good enough for me.

Going through these makes me realize again how better Heritage is at producing a quality card than some of the other tributes, such as Archives. That's why when I update this series again as Heritage goes through the '70s, I'll swap out those mini '71 and '72 versions, etc.

So, here is what designs are left on the list:

I'm depending on Archives for a number of these. (Archives let me down by not putting Kershaw on the '73 or '86 design when it had a chance. Same with '93, somewhat). I would think that the '56 design is coming to Archives soon -- unless Topps is afraid of creating a three-cartoon strip for each card.

But I'm going to stick with Topps because that makes most sense to me.

If any of this makes sense.

Old Cards said…
Fantastic year by year lineup. For a set collector, you sure are putting together a nice player collection. My collection is by year, but I have been thinking about reorganizing it by player lining them up just like you did with your Kershaw cards. This may give me the motivation to do it. Sticking with Topps makes a lot of sense to me.
November 7, 2019 at 7:41 PM

Chris said…
I'm wondering how long this will take given Topps' habit of recycling the same designs, but I think that there will come a day when one player has a card that represents every flagship set. The '91 Kershaw stands out to me in particular; everything about that card stays true to the original set.
November 7, 2019 at 8:52 PM

Bo said…
Sure looks like this Kershaw guy has been pitching for a long time. Decades in fact, though he seems to have slowed down over the last couple decades, just popping up occasionally. Kind of a pitching Minnie Minoso I guess.
November 7, 2019 at 9:36 PM

Brett Alan said…
I'm pretty sure Mike Trout actually does have a card on every Topps design, thanks to the special subset in Topps Transcendent last year. Of course, the ones in Transcendent are going to be super rare and expensive. Odd note--the 1974 design Trout has the city name space blank, because Topps didn't want to get into whether they're the Los Angeles or Anaheim Angels. https://www.blowoutforums.com/showthread.php?t=1276529
November 8, 2019 at 2:49 AM

Fuji said…
This is super cool. When things settle down for me, maybe I'll try this project out with Mr. Padre or Rickey.
November 8, 2019 at 8:38 AM

Lee Hero said…
Amazing idea. Looks like you have a great jump on the Kershaw Topps portfolio. I would think Jackie Robinson or Koufax would have high counts as well.
November 8, 2019 at 11:37 PM