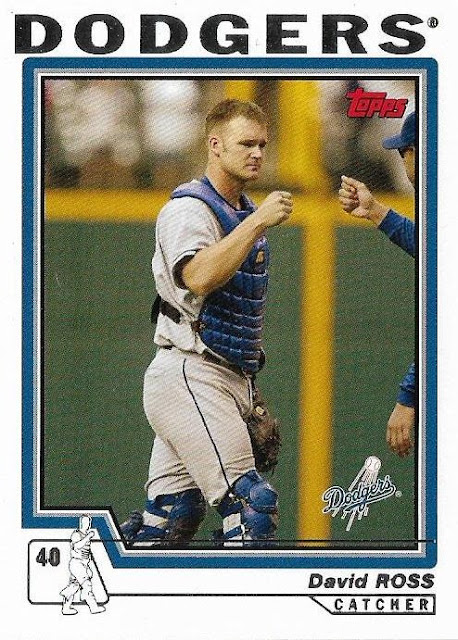 2004 marked my return to collecting after nearly a decade away. But my sole focus that year was trying to complete the 1975 Topps set, the set that first drew me into the hobby nearly 30 years prior.

Aside from one particular set that I'll get to in a moment, I had no idea what current cards were like in 2004. I didn't care about them and for all I knew, the only companies offering up cards at that time were Topps, Donruss, Fleer and Upper Deck (I was essentially right, but ask me the same question any year between 1995 and 2004 and you'd get the same four companies for an answer. I didn't know Pacific was a card company until probably 2008).

However, looking 15 years back on the hobby now, I have to say that 2004 was somewhat of a high-water mark for collecting over the past 20 years or so, probably even longer.

When I look back on some of my favorite card sets of the last 30 years, it's amazing how many of them were created in 2004. I think you can attribute that to competition among card companies, but that same competition was there for a lot of the years before '04 and I don't see so many of my favorites packed into any other year.

Let's review why I think that year deserves a proper 15th anniversary salute.

First, there is Topps' flagship set for the year. I rather like it. It's clean, it's somewhat classy, it features the little character in the bottom left that doesn't mean much but it's a nice touch. The player's uniform number is on the front, which is something I didn't know I needed until that set. And the photos are satisfying, even though you have to find some of the players with a magnifying glass, the images are so small. 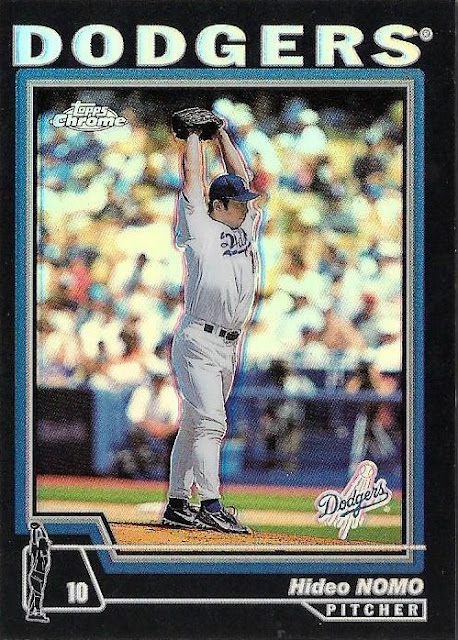 Chrome is Chrome just about every year. But sometimes it can stand out -- particularly the colored parallels. You need big borders for the proper fabulous effect and '04 Topps boasted bodacious borders. The black refractors look tremendous, you don't need me to tell you that. Probably the best ones ever made. 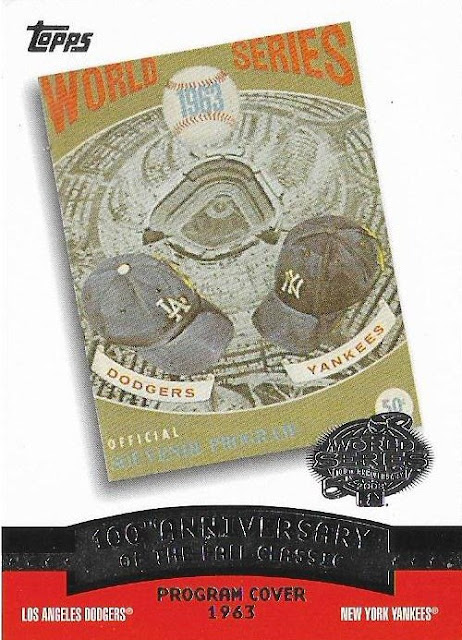 2004 Topps also contains one of the most inspired insert sets since insert sets were a thing. The World Series program insert set is so popular that I constantly run into brick walls when trying to add these cards to my collection. But I hope you can see why. Many card collectors are also fascinated by annual periodicals. These cards combine both and it's near genius. 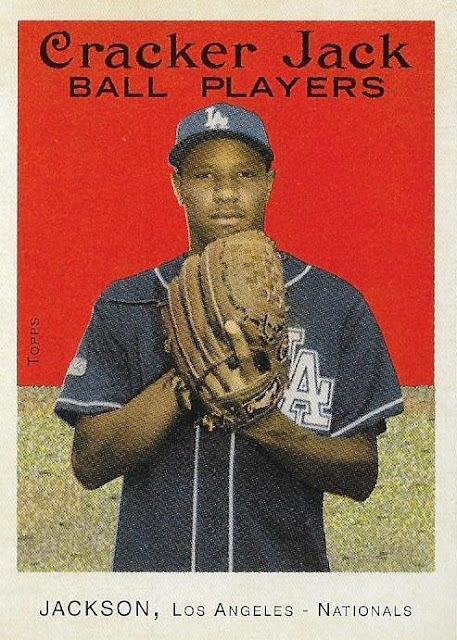 "Borrowing" from old card sets was all the rage at this time and I can't think of a better old set to mimic than the 1914 Cracker Jack set.

I've said many times that my interest in early 20th century cards is pretty low. When people break out their T-Two-Whatevers and everyone oohs and aahs, I try not to shrug my shoulders. They just don't do it for me -- I need something more than "good god, that's ancient!"

Cracker Jack fills that column. It's an ancient set that is probably the most eye-catching of that time period. I have loved it from the time I was a teen. I've never been able to land a card from that set, but that's what makes Topps' remake so special. They are pretty cards. 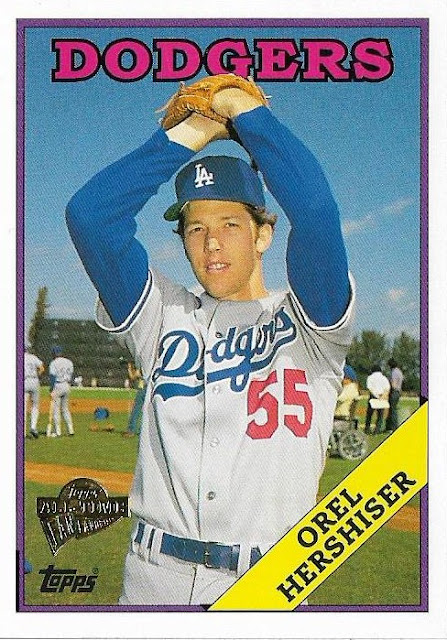 This is the modern set that first drew my eye in 2004. Somewhat amazingly, I discovered the Fan Favorites brand in a Kmart toy department in Buffalo that summer. I had no idea what I was looking at, but I knew I had to sample them.

The set -- although I didn't know it then -- hooked me on current cards, although that wouldn't take effect truly until another two years. The All-Time Fan Favorites set, which ran from 2003-05, remains my all-time favorite retro set and the '04 set in particular means the most to me. 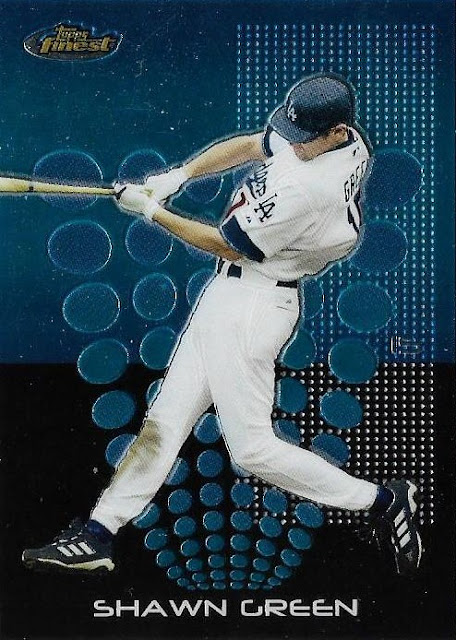 I know I like Finest more than a lot of collectors. But not every Finest design does it for me.

However, the 2004 Finest design is the one I like the most -- BY FAR. (2003 is cool, too). I love the colors, I love the bubbles emerging from the depths. Every card feels like a cold bubbly at the bar at midnight. Just beautiful and so much shinier than this scan is able to convey. 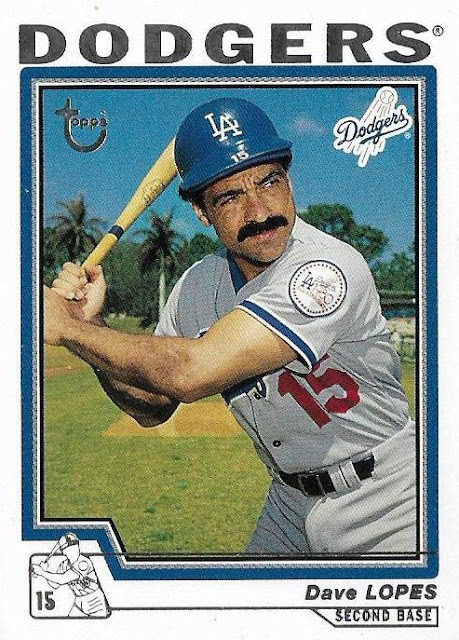 I am pretty sure that the first time I saw 2004 Topps Retired Signatures it nearly broke my brain. Old-time players on the current year's design? Whaaaaaa?

But it's a sensational idea. Topps, of course, has beaten this to death in the years since, but usually in some scattershot fashion. It's never been as good as '04 Retired Signatures. 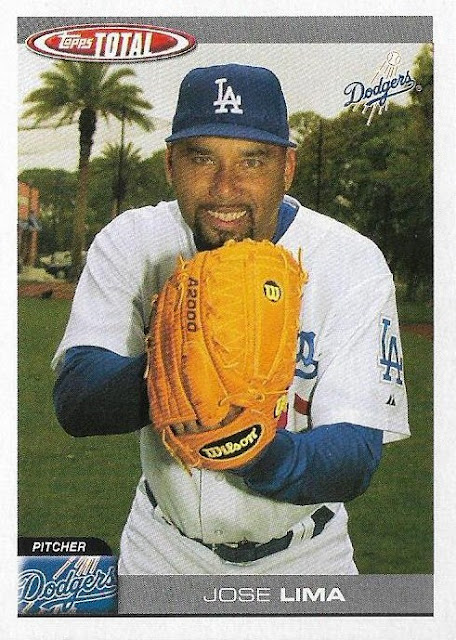 Throwing a bone to Total fans because I can't say Total ever stood out for me (possibly because I wasn't collecting then).

But I need to mention that in 2004 you were still able to find a set with multiple middle-reliever cards. And they each got their own card!

So, that was just Topps that I listed. They were really on their game. But I'm not done yet. 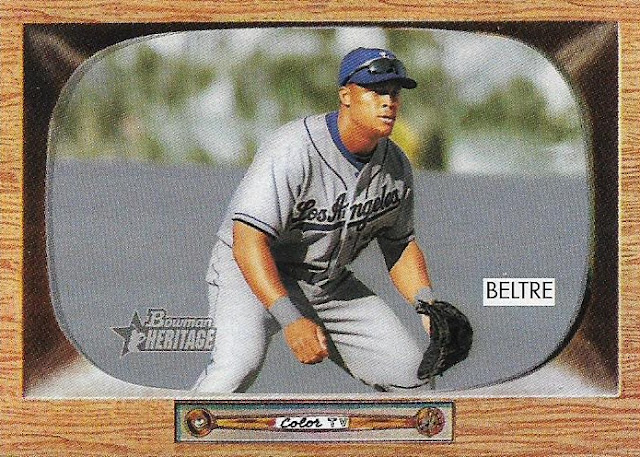 Bowman's Heritage line selected the 1955 Bowman design for the 2004 set. It's the most memorable Bowman set of all-time if you ask me. Probably not the best, but no one is going to miss it, that's for sure. 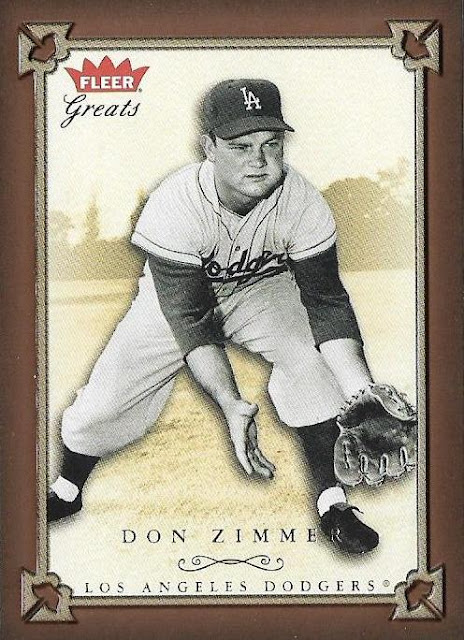 Fleer churned out several Greats of the Game sets during the retro craze that began at the turn of the century. All of them are pretty cool, but the 2004 set is easily my favorite look for the base cards. 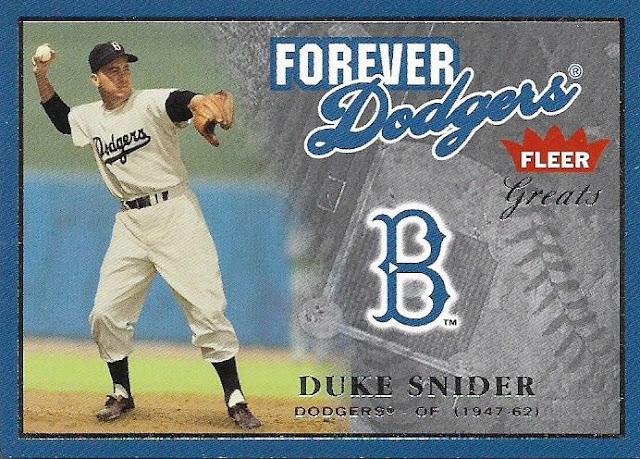 Also, these particular inserts are about as pleasing a design as I've ever seen. 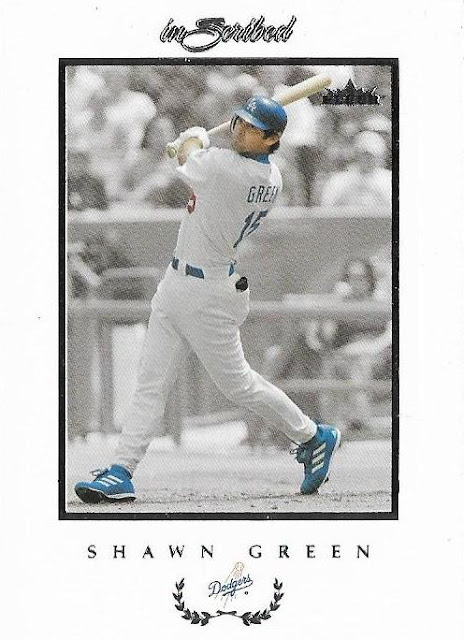 People make a lot of noise about the fanciness of a lot of high-end sets both currently and in the past. Much of the time I don't get it. They don't look particularly classy to me. 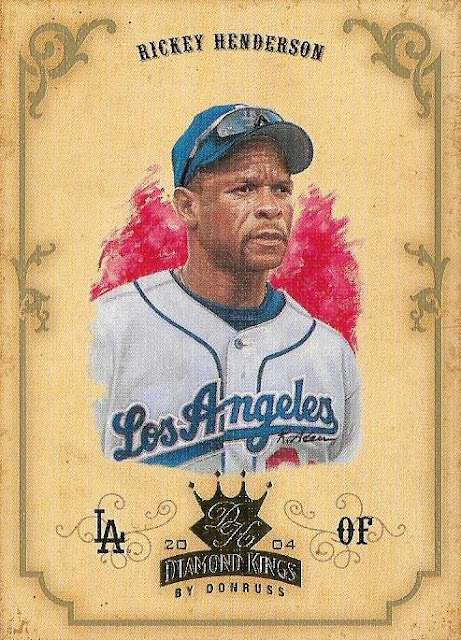 Also not normally a fan of Diamond Kings sets. But this is about the best-looking thing DK ever did. It was kind of ruined by an uptilllion number of parallels, but I'm focusing on the overall feel of the set here. 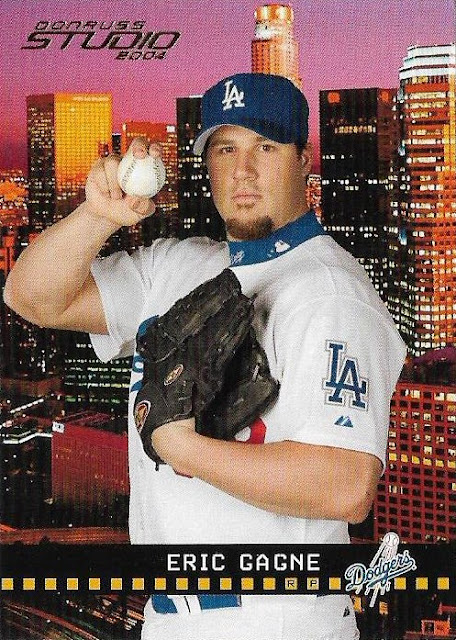 Studio I could take or leave. But the 2004 cards featuring the player in front of his team's night-lit skyline appeals to the night owl in me. Best-looking Studio set since the players were posed in front of their lockers. 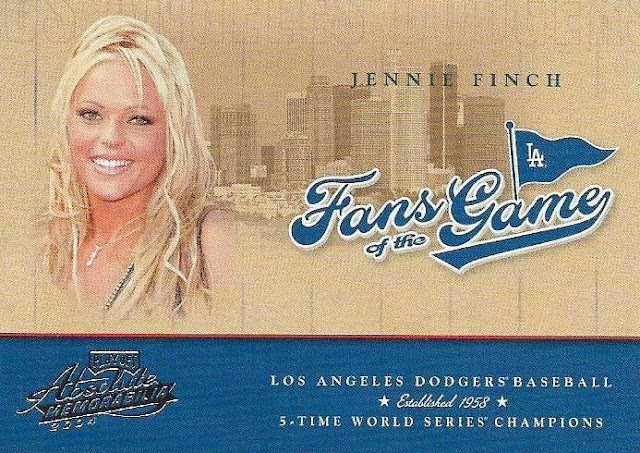 One of the early sets that brought celebrities into baseball card collecting. I'm all for that if it's done right. Donruss threw these cards into multiple sets, which had to be pretty annoying in 2004, but fortunately I wasn't collecting in 2004! I can just cherry pick the stuff I want, 15 years later. 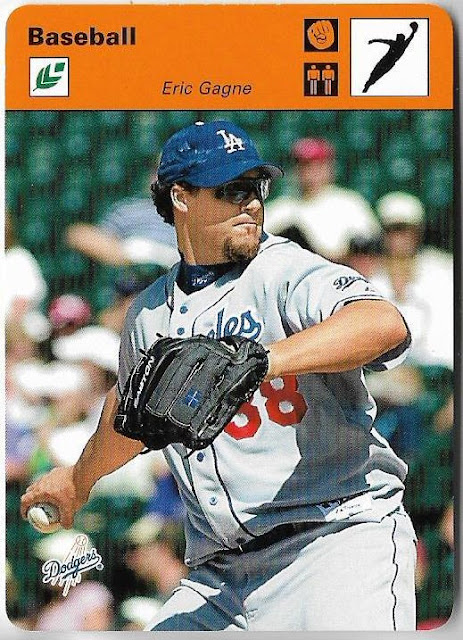 Again, love these 2004 Leaf tributes to the 1970s Sportcaster cards. Don't love how difficult they are to find.

Lastly, I don't want to leave out Upper Deck.

For me, Upper Deck put out fairly run-of-the-mill sets in 2004. I think Topps rolled right over them that year (Upper Deck also issued possibly the worst-looking set of '04, the Play Ball set where every player's face appears 15 minutes away from melting). 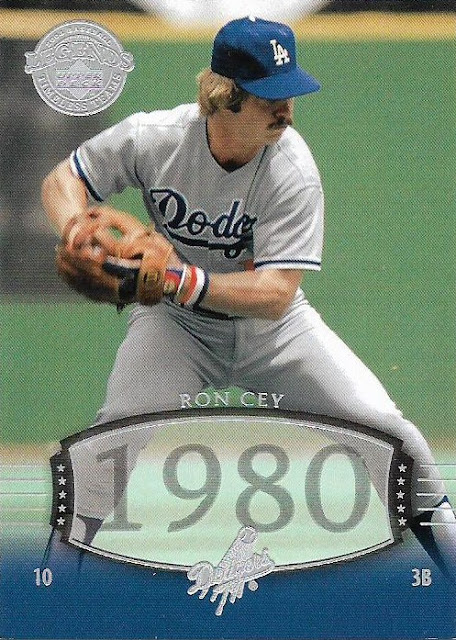 Timeless Teams is one of the greatest retro sets of that period and full of players I grew up with. Yeah, there's a lot of repetition and the photo time period doesn't always match up with the year. But I will not quibble about a set with new Ron Cey cards. Or new cards of Rudy May, Elrod Hendricks or Manny Trillo. Timeless Teams had them all.

So, in retrospect, the 2004 card season was pretty damn good and I kind of wish I was collecting modern cards back then.

But for the most part, I've made up for lost time, at least with the Dodger cards from that year anyway.

Johnnys Trading Spot said…
That seems to be the year that is popping up a lot in the discount boxes, and I love it.
November 8, 2019 at 9:35 PM

Nick said…
Oddly, 2004 Fleer Greats of the Game is one of the sets I credit with getting me back into baseball cards. The clearance bin at my local Target (back when Target had clearance bins) was packed with old packs of those right around the time I was returning to the baseball side of the hobby in early 2006 or so.
November 10, 2019 at 12:29 AM

Fuji said…
The 2004 Topps flagship design is one of my favorites from the past two decades... and right up there with the 2008 and 2015 designs. I wasn't collecting in 2004, but I have accumulated singles from a lot of the sets you've listed in this post. I really enjoy those Sportscasters and Timeless Teams cards too.
November 10, 2019 at 11:09 AM