One card in a PWE means everything 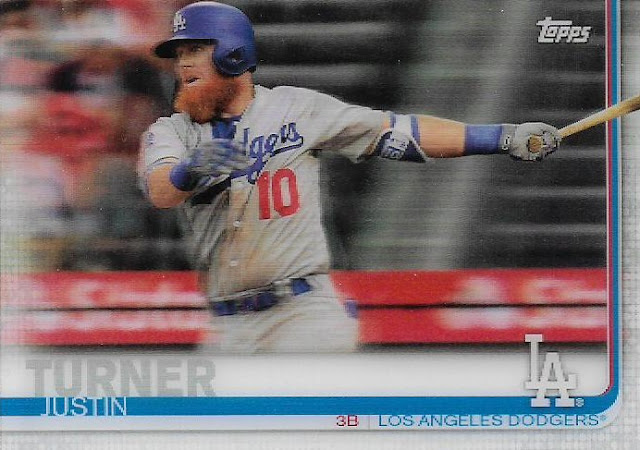 Even though the PWE has become much more prevalent in card exchanges through the mail -- who can afford postage prices anymore -- I still see a bit of attitude about it from time to time.

Mostly this is in reference to ebay sellers and their lame packaging. Those complainers have a point sometimes. But other times I look at it and think, "it's a plain, white envelope. That's perfectly legitimate for one card."

PWE's can pack a surprising punch. Also, there's something meaningful about a PWE that other packaging doesn't possess: "Here's something that I found just for you -- one card -- and I just had to send it."

I received three such PWE's recently.

One of them contained the card above. It came from R.C., who got in on Topps' online 3-D promotion before the cards sold out.

The 3-D effect is almost impossible to show on a scan, and I don't do gifs, but, trust me, it's quite effective. It has an updated Sportflics effect, except without the annoying "three guys on one card" theme. I actually think it looks more like a Kellogg's 3-D card as far as the actual player image. The 3-D effect though is much improved over those wonderful Kellogg's cards.

I really appreciate getting a cool card like this. And, for the record, I'd like to say that R.C. does not live in the Chicago area at all, like I mentioned in my last post. He said that my comparison would be like "calling Albany an NYC suburb," and as an upstate New Yorker I was instantly horrified. We hate it when non-New York Staters lump us in with NYC all the time. Sorry about that R.C. 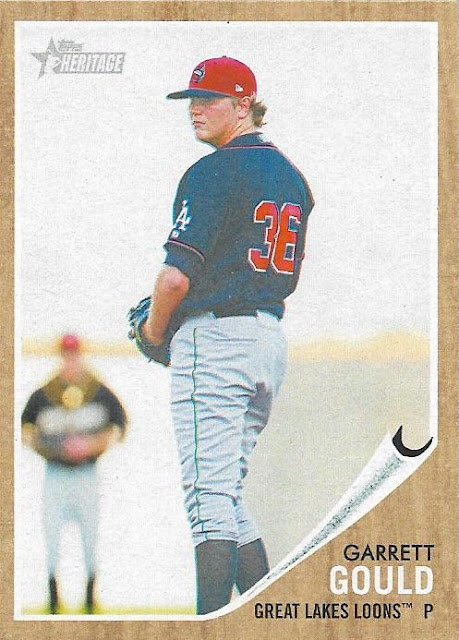 For the next PWE card, I have to show you this card first.

It's from the 2011 Heritage Minors set. Garrett Gould was a Dodgers minor leaguer at the time, a former Top 10 prospect before arm problems and the California League's high altitude wore him down.

This is what the green-tint variation looked like in the minor league set: 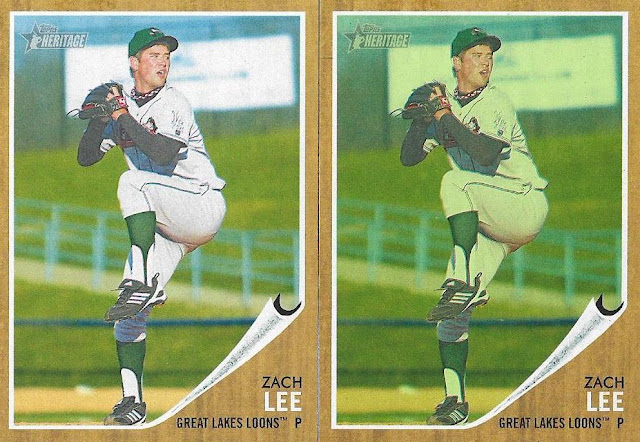 It's rather subtle, although the fact that Zach Lee is wearing green and there's a bunch of green behind him somewhat dilutes the effect.

But Topps also issued red-tint variations, which wasn't a thing in 1962, but that's the variation world that we continue to live in.

Now the card I received in the PWE: 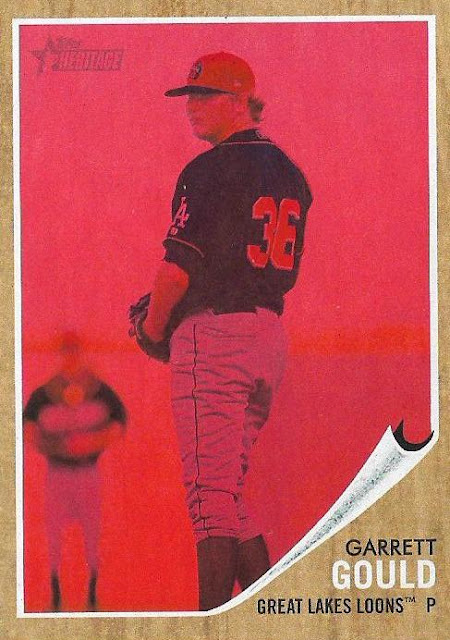 That practically knocks you over.

That's not subtle at all. This card came from Matt, who runs Summer of '74 but is mostly on Twitter. The red tint was so drastic I just had to have it. No wonder Gould had arm problems. Pitching inside a 1,000-degree fire will do that.

OK, last PWE and I have no idea who sent it.

The card arrived in an envelope with no return address. I sort of recognize the handwriting, but since I'm not putting handwriting samples in my address book of fellow card collectors, I still have no idea.

I did have a couple of suspected candidates but then I tried to read the postmark that's a bit obscured by stamps. It says, Shreveport (Louisiana?) and now I definitely have no idea. 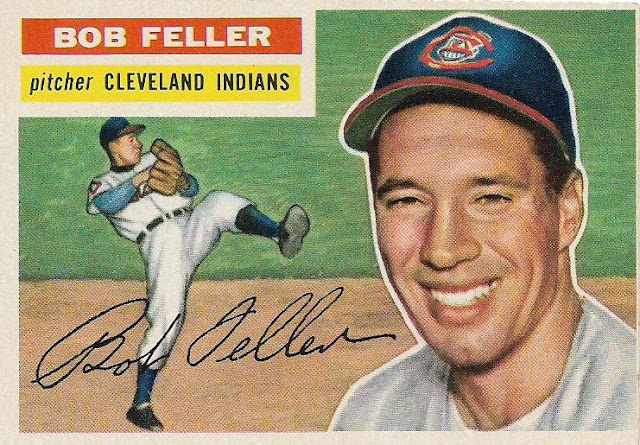 That is one of the many "heavy hitters" that I still needed from the 1956 Topps set. It's in magnificent shape with crazy sharp corners. It's amazing what you can get just because the card's a little off-centered.

This is the stuff that shows up in a simple PWE.

And it can mean just as much -- even more -- than a yellow mailer or a big box or even a case of cards shipped to the house.

Nick said…
I just bought a copy of that same '56 Feller at the card show this past weekend, though your copy is in MUCH better shape than the one I picked up.
November 27, 2019 at 7:59 PM

Clark said…
Never thought of the PWE from your perspective! Great post! We feature more modern cards on our website at fivecardguys.com but we're starting to get into more vintage ones too.
November 27, 2019 at 10:33 PM

Mike the History Teacher said…
The Feller card is really, really nice -- the design as well as the condition. You got me interested in '56 Topps when you named it the best set a few years ago. I think I have only four or five cards from the set in my collection, so I'm not even thinking about starting to try to complete a set. But there's something about the combination of the action and mug shots that make it a beautiful card to look at.

An older gentleman who sometimes substitute teaches at my school owns several complete sets from the mid and late 1950s, and many of the cards are originals from when he was a kid. ("My mother was the only one who didn't throw away her son's cards," he told me.) When he found out I collect, he brought in his '56 set to show me. I was in awe as I went page by page through his binder. It was the first time I'd ever seen a complete set that old. The colors -- on both the fronts and the backs of the cards -- jumped off every page. NOC, I know you still have to snag most of the "heavy hitters" in order to finish this set, but I know you will, and I'm looking forward to one day reading that post.
November 27, 2019 at 11:53 PM

RoundtheDiamond87 said…
I ship up to 4 cards in a PWE using semi-rigid holders, and taped within a tri-folded sheet of paper for a smooth ride through the sorter. It keeps the costs down for everyone.
November 28, 2019 at 7:09 AM

Fuji said…
When it comes to care packages or eBay vendors who offer free shipping and state they're sending the cards in a PWE, I have zero complaints. Care packages are bloggers being generous and if they want to ship in a PWE, it's their prerogative and I'm grateful for whatever anyone sends. However... it's a little annoying when you buy a card on eBay and pay $4 shipping and they end up PWE'ing it.