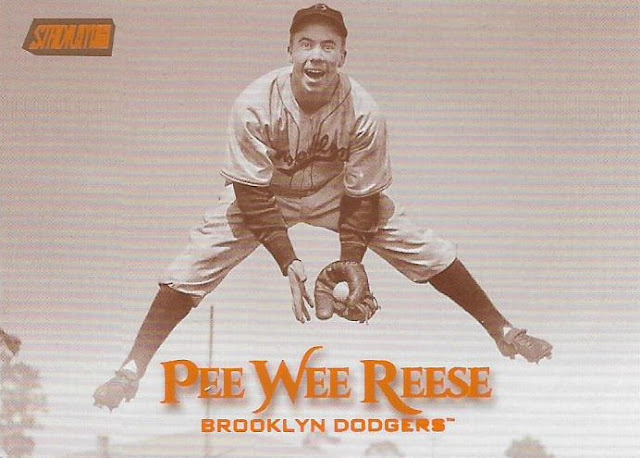 I haven't gotten very far on my research of legends players in Topps products over the years.

I still plan to get as exhaustive as I can but for now I'm going to focus on one guy and one year only.

I'm happy that Pee Wee Reese is back as a legend in Topps products in 2019.

If you've been paying attention over the last few years, only certain legends players show up in products year after year after year. Players like Hank Aaron, Cal Ripken, Sandy Koufax, Reggie Jackson and Jackie Robinson are consistently in sets every year, so consistent that you'd rather never pull another new card of theirs again.

But then there are legends players that when you pull their card, you all of a sudden realize that you pulled their card before -- like six years prior -- and you hadn't pulled one since then, until now.

That was the case with Pee Wee Reese.

Reese is probably my favorite Dodger from his era. He was a somewhat underappreciated star player who helped change the course of baseball history without being a focal point. I love it when I find cards of his for my collection.

I don't know how retired player license contracts work, but given that Reese isn't the only one who has suddenly appeared again after being absent for several years -- Gil Hodges is another one -- there must be some sort of rotating system for some of the legends names.

But I'll leave that for my research down the line. Meanwhile, I'm just happy to have this parallel of one of my favorite 2019 images.

It came in yet another package from Marc. Good thing, because I've been pulling Astros cards like crazy lately.

Marc kept the cards to stuff from the last couple years and Dodgers mostly. Cool with me.

Let's see some of the stuff that I don't even buy anymore: 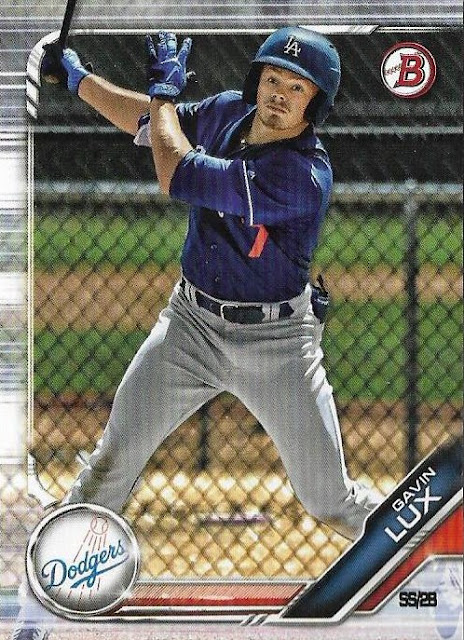 Starting with a Bowman Prospects card of one of the Dodgers' many young stars. Expect to see Gavin Lux in a ton of products and inserts next year. 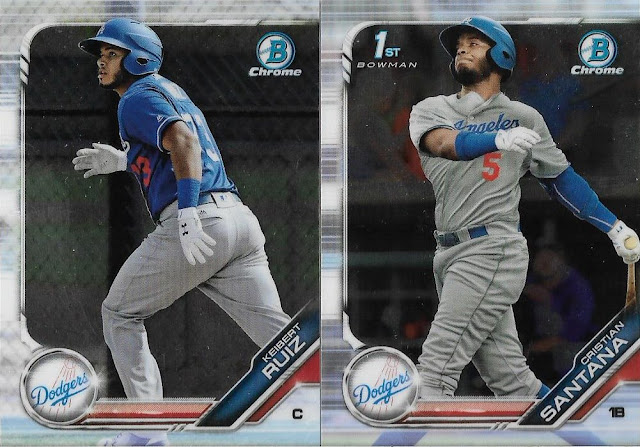 More Bowman. More stuff I ignore on store shelves. This is Bowman Shiny, which is what I like to call Chrome now because it sounds more friendly. Bowman needs to be more friendly. 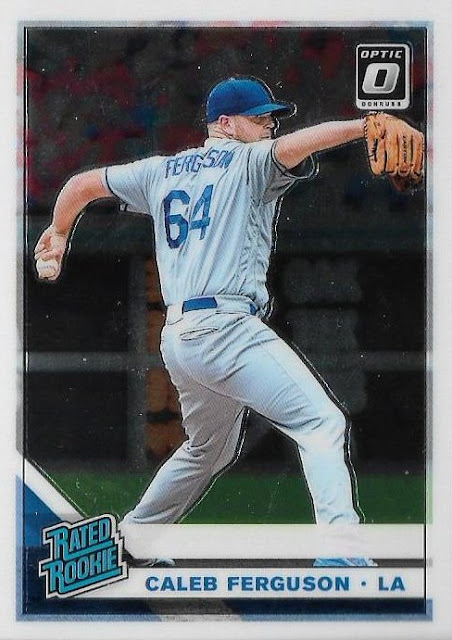 Still with products I don't buy on my own. Caleb Ferguson has set his personal best for most cards appeared on in a single year. I guarantee you, for the rest of his career, he will never break his 2019 record. 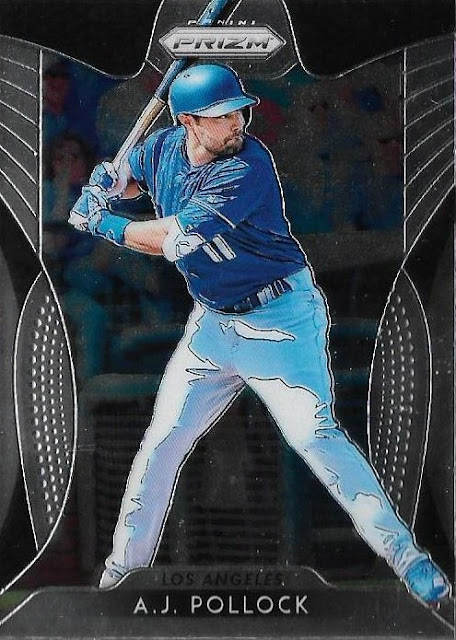 Gah. The less said about this the better. 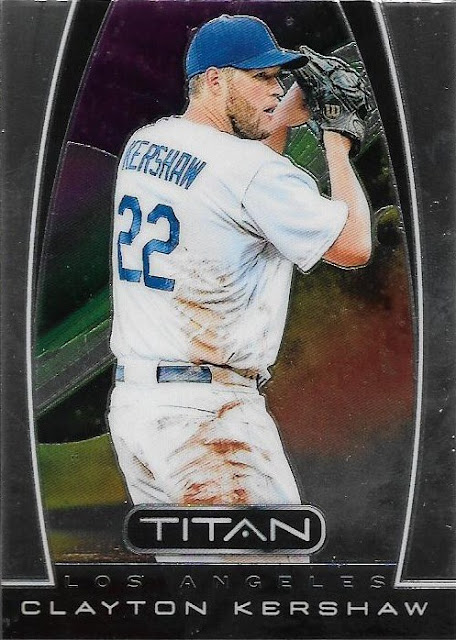 For people like me who don't know Panini cards all that well, random Chronicles cards can be a mystery. Is this a card from the Prism set? The Donruss set? The Optic set? No, you fool, it's one of the many unrelated Chronicles cards.

Now you can see why I gave up on attempting to collect all the Dodgers about five years ago. 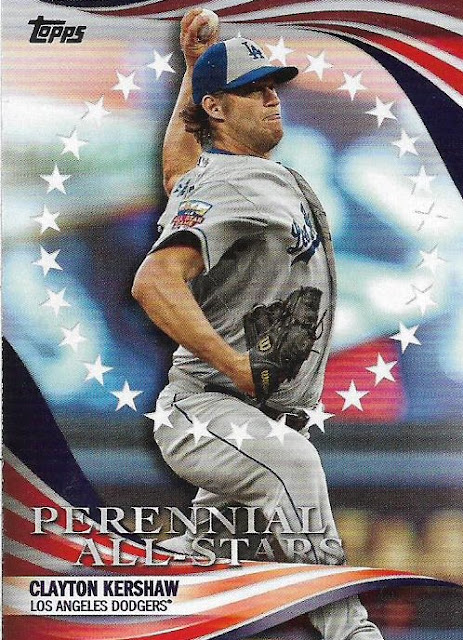 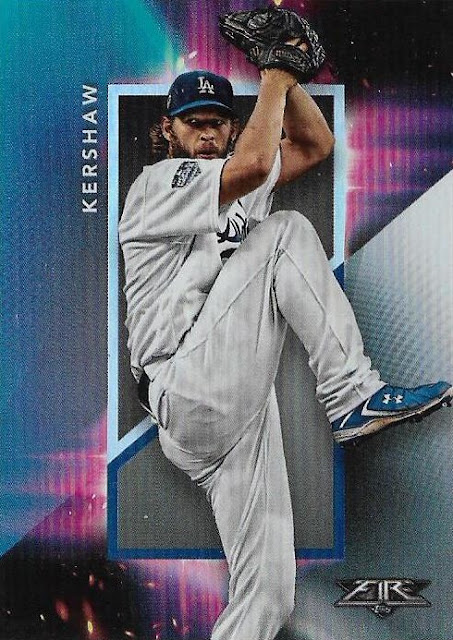 These are the other Kershaw cards from the package that are new to my collection. The Topps Fire cards from the En Fuego insert set are pretty nice, though they look a lot like these: 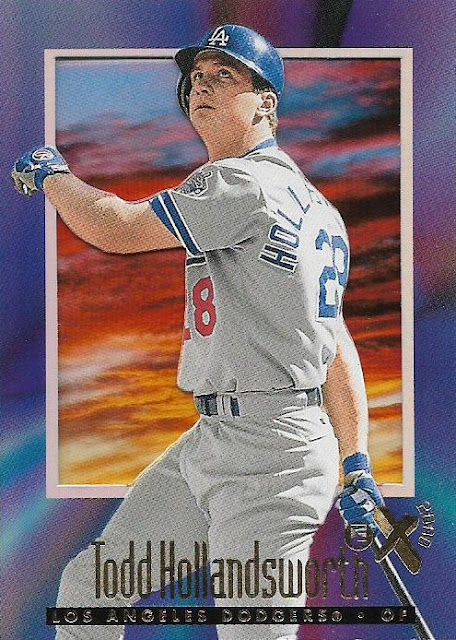 Obviously the '97 EX is more impressive. 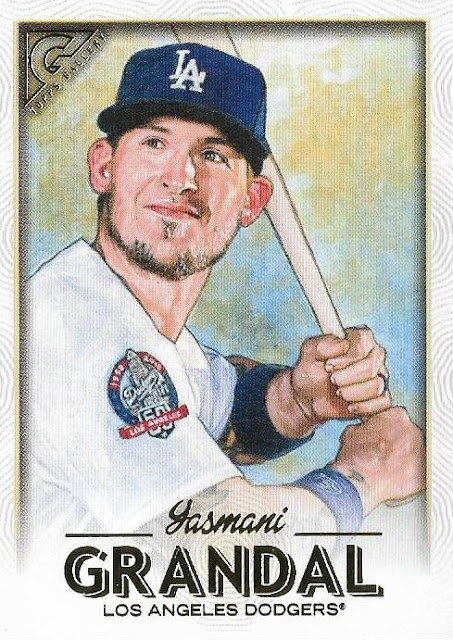 This was Yasmani Grandal's reaction today when he signed the richest deal in Chicago White Sox history. That sounds all kinds of wrong, but I'm not a White Sox fan. 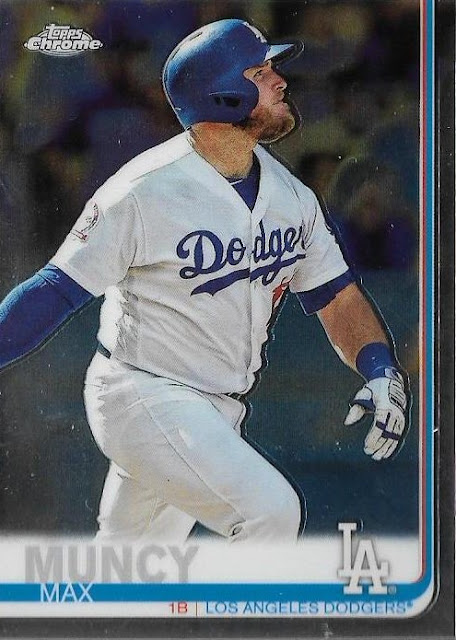 Six months ago I was railing about how Topps refuses to make Max Muncy cards. Now I'm sick of this image. #ThanksTopps 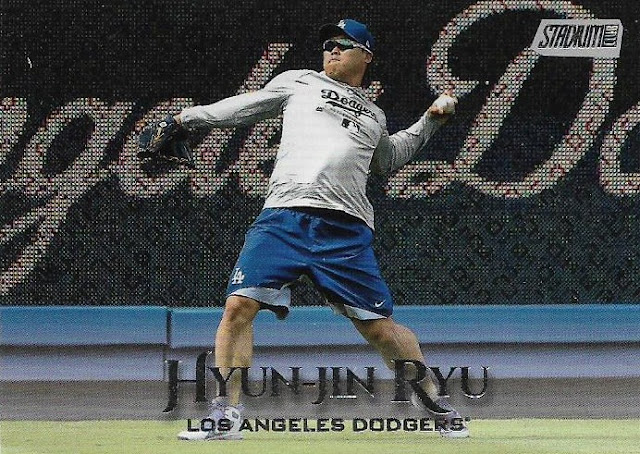 The Dodgers' biggest free-agent name. All I need to complete the SC team set now is Kiké Hernandez. 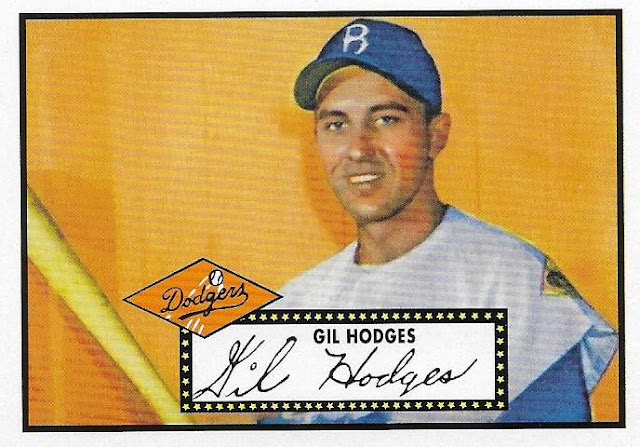 There's Gil Hodges now on one of those We At Topps Reprint Old Cards Until Time Ends cards. I still don't have his '52 Topps card so I guess I shouldn't complain too much. 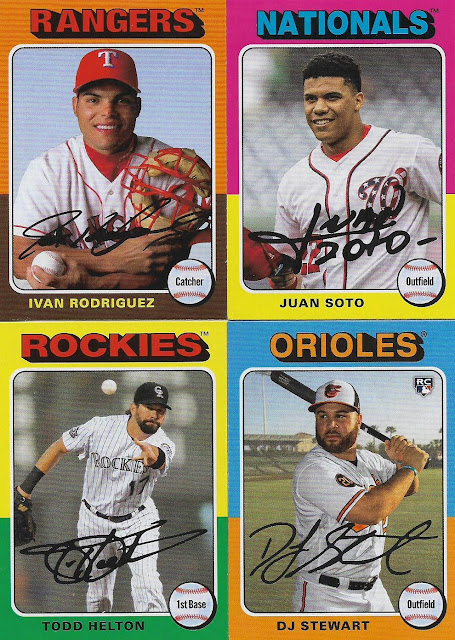 Somehow, Marc managed to escape this scourge with these four cards. I now need just eight of the '75-designed cards to complete that portion. Yes, Judge and Ohtani are two of them, of course.

Many thanks to Marc for even more goodies. I hope to finish off the legends-on-cards research before the end of the year, but you know how that goes. You should know anyway.

Billy Kingsley said…
If the licensing works like the NBA and NASCAR, they have to sign each person individually that is not currently a member of the Player's Association or equivalent, but the photos come along with the sport's license. If it works like hockey they need both the retired player's association AND each individual person. I don't know if MLB is the same as either of those or it's own unique thing.

I know Panini generally only puts in retired players if they are willing to sign autographs or have passed away before Panini got the license..
November 21, 2019 at 10:22 PM