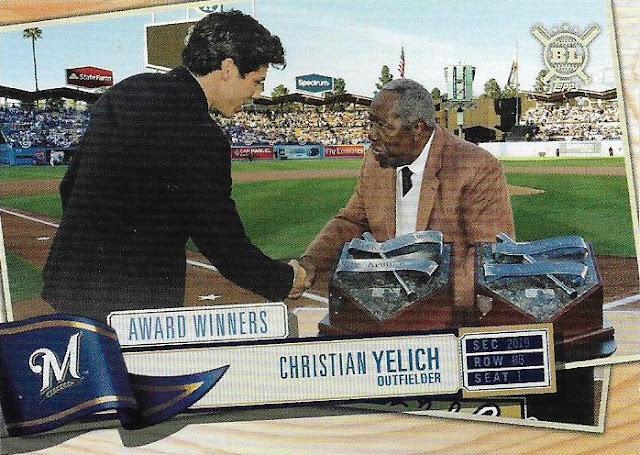 I'm still a little bit obsessed with the "new" sorting method for my sets -- sorting them by last digit instead of first digit.

So I decided I'd continue the experiment with the 2019 sets that I'm organizing this month. November is the month when I start "putting away" the year's current sets, which means cataloging, sorting and stashing. Why not try each method and time myself with each set?

So the latest set is 2019 Big League. Here are the times for the old way (hundreds, then tens, then ones) and then the new way (last digit, then middle digit, then first digit):

That 14-minute mark is the shortest time frame yet in the few times I've done this. So I'm curious to see how things will go with future 2019 sets.

The reason why I'm curious about this sorting method is because -- I LOVE SORTING.

In fact, this is the very sentence I practically said out loud when I read a post yesterday titled Sorting Sucks.

It absolutely does not suck. It's one of the most amazing parts of this hobby.

Not only is it as therapeutic as a walk around the neighborhood, but it is so blasted satisfying when it's finished. I find the process thoroughly enjoyable and it's also not so brain-consuming that you can't do anything else while your sorting. You can watch a game or a show and sort at the same time!

This is how much I love sorting: 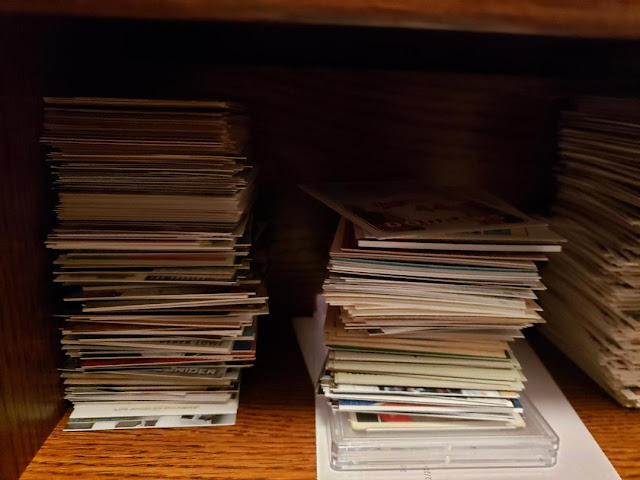 That is a portion of my card desk where I stack new Dodgers cards. They're stacked in order by year and then set and then alphabetically because ... SORTING!

Once I have just about four different stacks of maximum height, then I get to put them in my Dodgers albums, which is a whole other wonderful sorting process.

It takes several months to get to four different stacks, because I'm not rich nor do card shows want to visit me. So I do this particular sort maybe twice a year.

That is not often enough for me.

Many times, I will glance at these stacks, hope that they've grown far enough that I can start a sort, and then am disappointed that they're still the same size. That's how much I want to sort them. 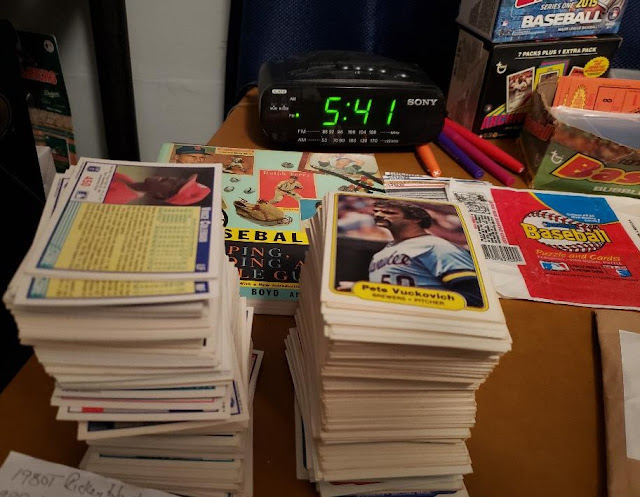 Here are two stacks of cards from two different sets just hanging out on a corner of my card table.

They are waiting for when I have a binder each for the 1991 Score set and 1982 Fleer set. I don't have those now (right now there are some '82 Fleers jammed in with my complete '81 Fleer set and I'm afraid that binder is going to burst).

Every time I go into my card room (which is still awesome by the way), I wish I had those new binders so I could start the respective sorts into the pages, sending each card to their destined home and gaze upon how wonderful they look all together.

But I am sad. Because there they sit. And I don't get to sort. 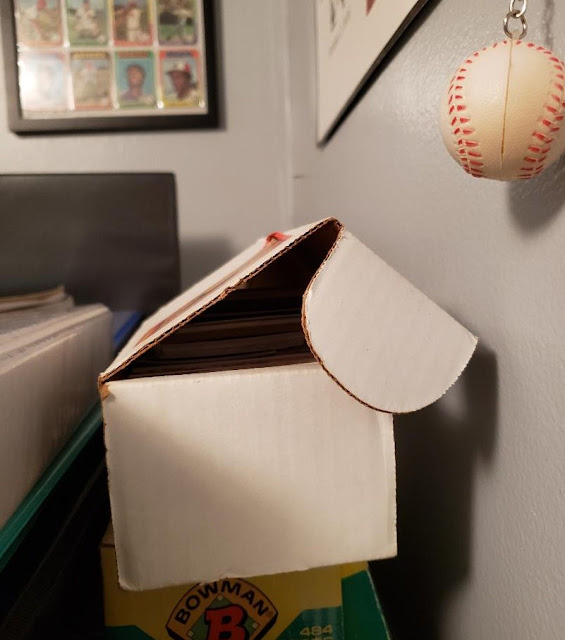 Here is a box of hockey cards. They sit in a box because, sadly, again, I don't have a binder for them yet.

It annoys me enough that I've stashed the box to the back of the shelf, behind some binders, so I don't have to look at it when I walk into the room. Because seeing it will make me sad that I don't get to sort. 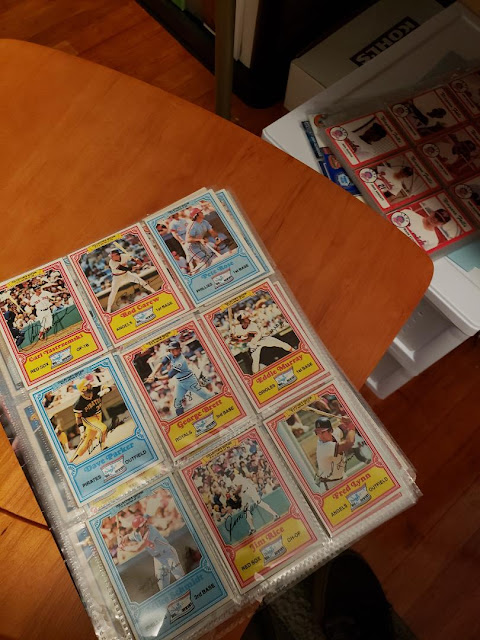 More pages without binders. They're basically sorted already. But it's not until you get them into a binder that you know whether they really belong together or whether certain cards should be moved somewhere else to create a better presentation. That's the beauty of the sort!

So, when someone says "sorting sucks," no, I have no idea where they're coming from. I enjoy sorting because it's a process, it's a journey.

I get receiving a giant box of cards and being overwhelmed by the whole thing. "This is going to take forever," is often the thought that I have.

But after a few moments, I calm down.

The next thing I think is:

And off I go. Happily.

Laurens said…
Sorting is grunt work activity that still says I like collecting, even when it gets tedious.
November 22, 2019 at 9:56 PM

JediJeff said…
Does your town not have a Goodwill with 99 cent binders? I have way too many binders I need to fill. I have the cards. Just need the pages.
November 22, 2019 at 11:24 PM

Billy Kingsley said…
The only time it's not fun is when you knock over a stack and they OF COURSE all land on the corners. And that seems to be the only way a card ever lands.
November 23, 2019 at 12:28 AM

HockeyFan said…
Sorting rules when you know all the cards are for your collection and you just have to put them in the correct box/binder. But if you have a huge box of cards that you only bought because the price was low, then I can see how someone might dread sorting a box that will mostly contain base commons that you have no interest in.
November 23, 2019 at 2:12 PM

night owl said…
I try to be more efficient then that. I'm not going to buy lots where there's a chance I won't be interested in most of the cards.
November 23, 2019 at 3:00 PM

cynicalbuddha said…
I totally agree. Sorting and collating is therapy for me. Nothing better than building a set and the satisfaction when it's done. It's hard for me to resist a large, cheap box, I'm talking monster box size, of random cards. the joy of searching though the box looking for stuff for my player and team PC's, cards I might need for various sets and then of course what gets put out for trade fodder. It's boom or bust sometimes. Sometimes is chrome refractors and sometimes is 2012 Triple Play, but you never know.
November 23, 2019 at 3:12 PM

Fuji said…
Wow. Cardboard blasphemy. I like it. Maybe that should be my new blog name. I figured I'd get some blowback from that post, but I wanted to keep it real. Sorting has been a huge part of my collecting since I was a kid. Organizing my baseball cads in a variety of ways, along with building sets allowed me to channel my OCD. And throughout most of my collecting history, it's been very therapeutic.