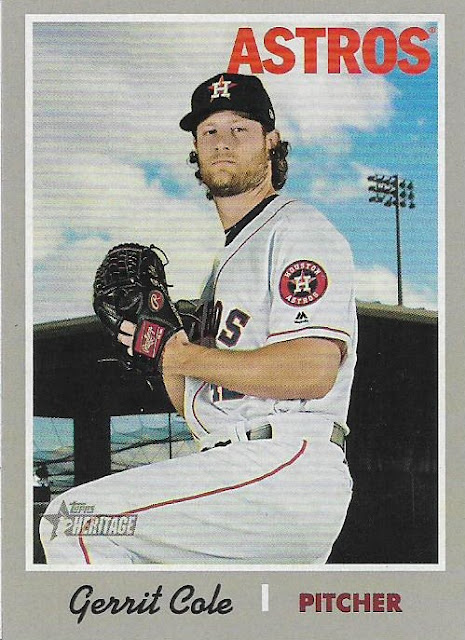 That means taking them from the stacks of 2019 cards that have built up on my card desk since last winter and moving them to boxes or binders. Spoiler alert: only sets that I particularly enjoy get the binder treatment and none of the 2019 cards will see the inside of a binder.

I always start with 2019 cards that I know I will not purchase again in a moment of weakness in the retail aisle. And, sadly, because I do love the brand, Heritage is getting that box treatment right now.

While inventorying what I have of '19 Heritage, I discovered something that I hadn't noticed, nor had read anyone mentioning: 2019 Heritage marks the return of full names on the backs of Heritage cards.

That means we get to read the full names of current players on Heritage backs this year for the first time since 2008 Heritage when it copied the 1957 Topps design.

Don't you remember the great deal of fun you had back in '08 reading about players' full names? 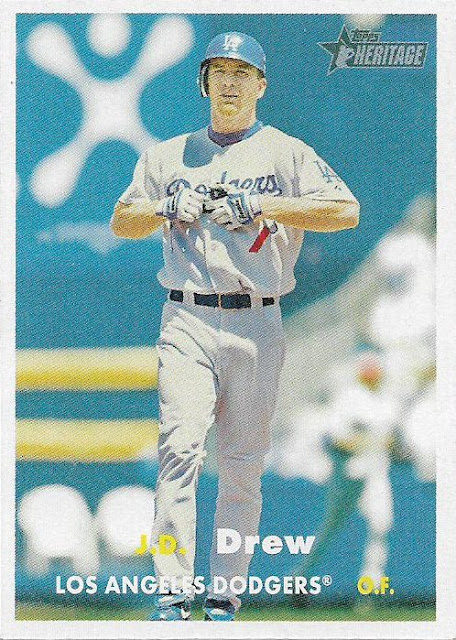 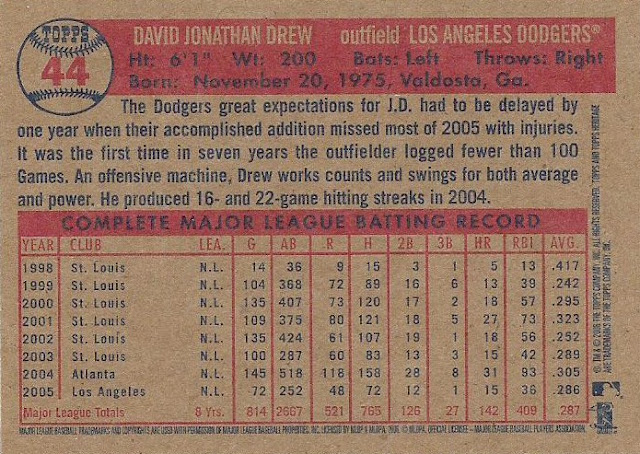 How does the family explain that?

So, anyway, there was hilarity like this on every 2019 Heritage card back, right?

Full names -- and specifically middle names -- have gotten fairly bland over the years. It's bad enough everyone's first name is Justin or Austin or Cole but the middle names don't even stand out. 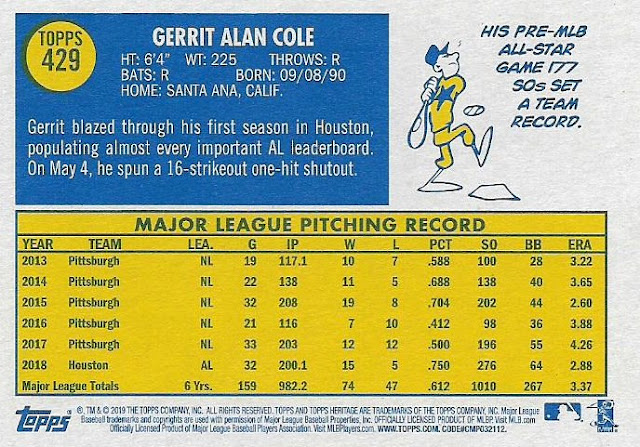 Gerrit may spell his first name with just one "T" but that middle name is as straight-ahead as grounder up the middle.

I could find very few of the middle names that stuck in my head while collecting cards as a kid in 1975. There is no Cyril or Duffield or Le Franco or Trumpbour.

I grew up with those unusual names and memorized them from the backs of my cards. Fritz Peterson was actually Fred Ingels Peterson and Mac Scarce was Guerrant McCurdy Scarce. Holy cow! How the heck do you pronounce that??? 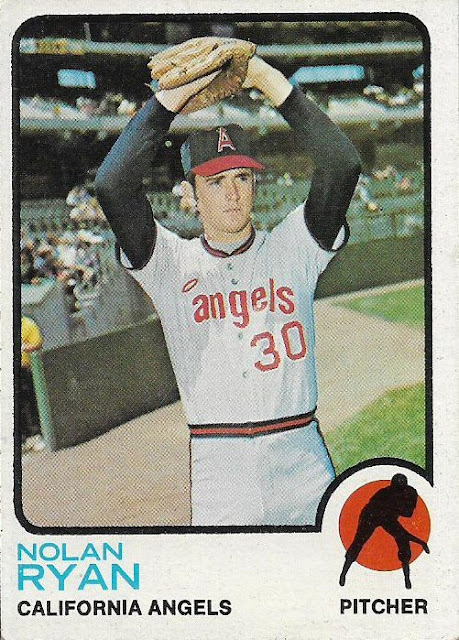 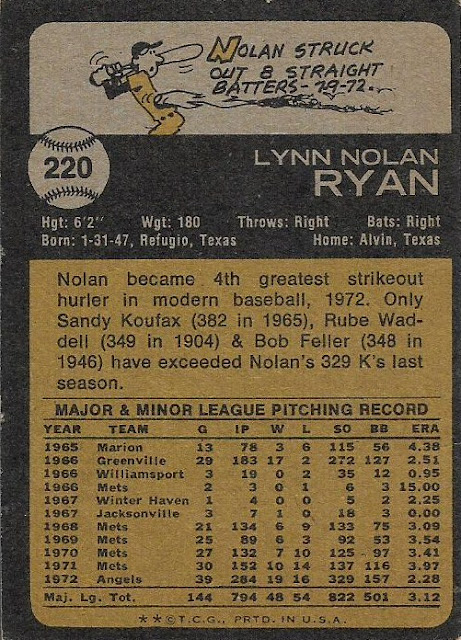 And Nolan Ryan was actually LYNN Nolan Ryan. Every kid knew that.

Going through those 2019 Heritage cards I couldn't find a lot of players with different given first names than what showed up on the front of their cards (Although I was somewhat inexplicably relieved to learn that Dansby Swanson's first name is really his middle name and his given first name is James).

I did find a few Dodgers. 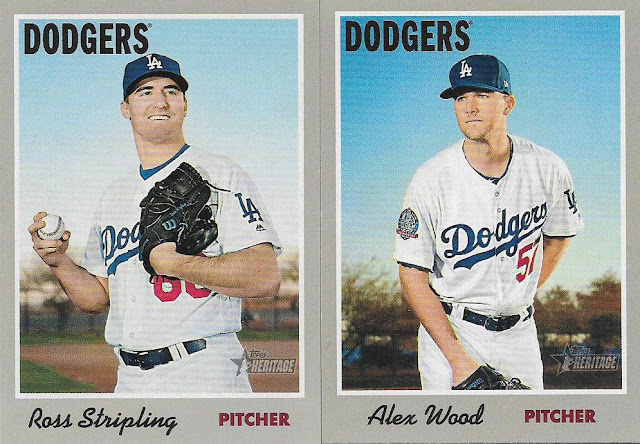 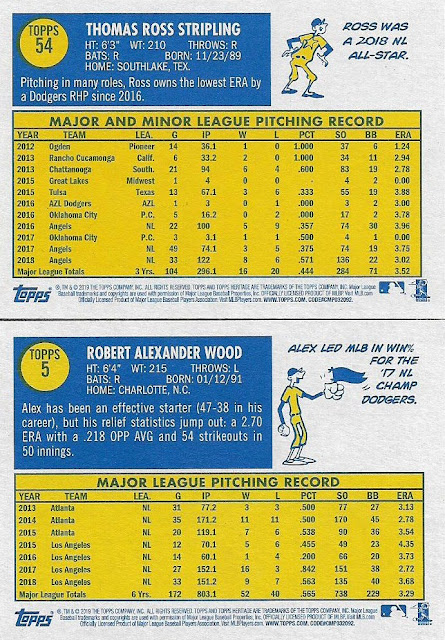 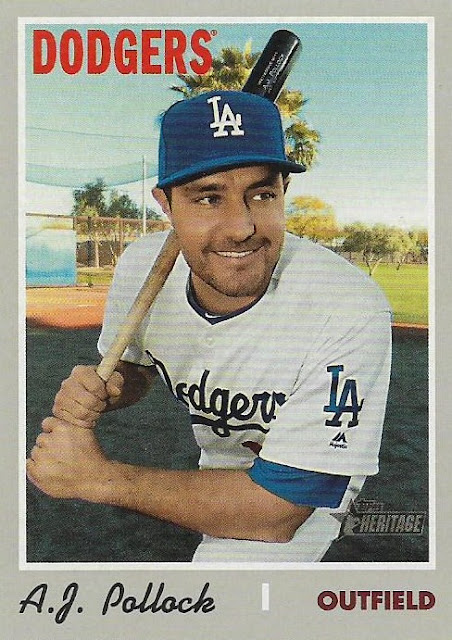 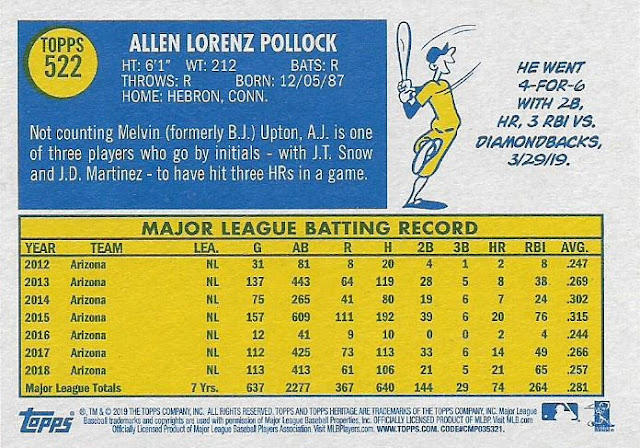 A.J. Pollock is actually Allen Lorenz Pollock and I don't know how you get "A.J." from that.

The point though is there was once a time when I knew the full names of a lot of baseball players because of what was listed on the back. It's why it's still so much fun to say "Reginald Martinez Jackson" or "Michael Jack Schmidt" or "Peter Edward Rose."

After Topps stopped listing the full names of players, Donruss took up the very worthy habit. From 1981 through 1992, Donruss mentioned full names for every player, so I could extend the full-name knowledge that began with knowing that Toby Harrah's actual first name is "Colbert" by knowing that Vince Coleman's middle name is "Maurice".

Today, we don't have any idea what players' full names are -- or at least I don't. The only one we know is C.C. Sabathia, where those initials have sat there and taunted us for years until you finally obsess: "well, they've got to stand for something" and, of course, everyone is thinking the same thing because everyone knows that it's: 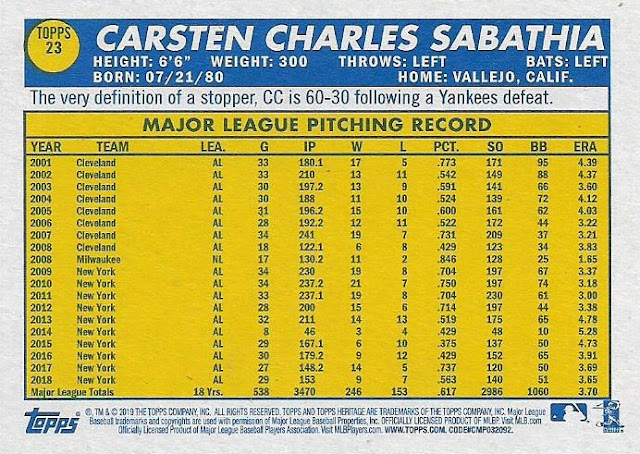 But try to come up with another full name of a current player. I can't. Not for anybody.

Ever since that first year I collected cards I've known that my favorite player, Ron Cey, was born Ronald Charles Cey.

But I didn't know the full name of my current favorite player, Clayton Kershaw, until I turned over his 2019 Heritage card. 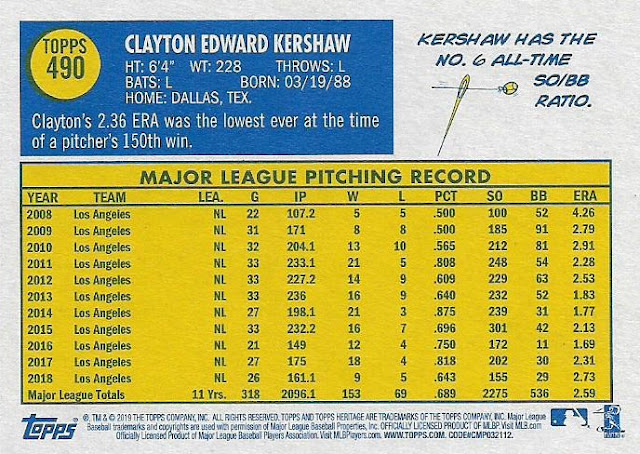 OK, that's not exactly Trumpbour or William Wattison Horton but at least I know.

Now in the box you go.

buckstorecards said…
They also do the same on Heritage Minors 2019. Which you might be seeing an example of later this week. No spoilers!
November 4, 2019 at 7:39 PM

Zippy Zappy said…
Regarding A.J. Pollock I think it's because his dad is also named Allan. Meaning it's actually Allen Jr. Lorenz Pollock.
November 4, 2019 at 7:42 PM

Zippy Zappy said…
Incredible, I spelled Allen wrong and then correctly in the same comment.
November 4, 2019 at 7:43 PM

Brett Alan said…
My middle name is as straight-ahead as a grounder up the middle. I feel as though I should put that on a t-shirt or something.

Zippy beat me to the idea that AJ Pollack probably comes from “Allen Junior”. I can’t find anything confirming or denying that, but his Wikipedia page does mention that his father is named Al.

What I really want to know is, do we have any stealth Georges? It’s a long tradition in baseball to have superstars named George who aren’t called George, from Rube Waddell to Babe Ruth to Tom Seaver to Ken Griffey Jr. But I’m guessing we’re not going to flip a card over and see “George Michael Trout” (um, wake him up before you go-go?) or “George Jose Altuve”. Are there any stealth George guys out there now?
November 4, 2019 at 7:52 PM

Johnnys Trading Spot said…
Names can be a funny thing. But what's in a name? It's just a name, something you can change if you like. For instance, My "full" legal name is John Frank Miller, Jr. However, my father is not John F. Miller. His name was Harold Bailey McIntyre, my mother's name was Margie Lea Hall. It's a long story (not too long really but definitely TMI). But the John Frank Miller I was named after....well that really wasn't his real legal name.......It was actually Mueller, which he took back several years before his death. Like I said, names can be a funny thing.
November 4, 2019 at 10:33 PM

Mike the History Teacher said…
I didn't know this -- I had to go to B-R -- but Tigers reliever Buck Farmer is actually George Runie Farmer.

Nick Vossbrink said…
As someone who blogged about the way Topps handled the double Latino surname situation I was hoping to see Topps do the same thing with Heritage this season. But they didn't. Nor did they switch the Chinese and Japanese names around to be surname first.
November 5, 2019 at 12:12 AM

Fuji said…
Before publishing this comment I was confident that I learned Nolan Ryan's full name from his 1981 Fleer card, but after checking on COMC, I noticed that Fleer didn't include Lynn. Then I noticed that Donruss did... which is probably where I learned that little piece of trivia when I was a kid.
November 6, 2019 at 12:06 AM