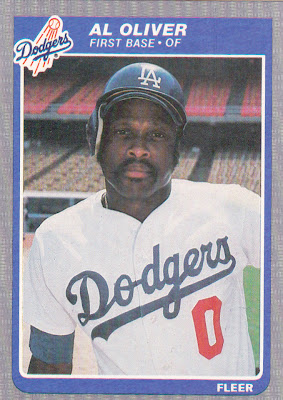 I have little time for a work-intensive post (i.e. lots of scanning) today. But I do have random thoughts bouncing around in my brain -- ones that actually have to do with card blogging -- so I'm gonna post them here. You can all get a look at what's going on inside my head together.

Yes, I teed that one up for you.

Randomness 1: Al Oliver is posted here because I've decided to take steelehere's suggestion and do a series on Dodgers uniform numbers, number by number. The suggestion was to start at No. 1, but Oliver wore number zero for the Dodgers, and I can't forget him. So there. I've already started. Al Oliver wore No. 0 for the Dodgers. That was easy.

But the other numbers won't be as easy. There's a fair amount of research, and I guarantee I'll get something wrong. Also, the No. 10 worked so well because I could attach a pretty girl to the post. I doubt I can do that every time. Despite what AdamE insinuated, I try not to be rabidly gratuitous. But I'll try to make them interesting.

Randomness 2: You may have noticed the polls on Topps' biggest one-year improvement and biggest bust languishing on the sidebar. I haven't forgotten about them. I still do intend to do a post on the results. I just haven't figured out exactly what. I also want to do the same thing for the other card-makers. So I'll tend to those polls, just don't you worry your pretty little heads about it. 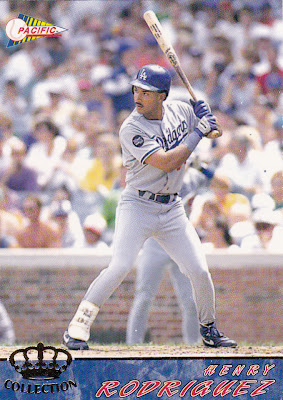 Randomness 3: Remember all those '94 Pacific Dodgers that I received from GCA? Well, he has a lot more '94 Pacifics than that. He's more than happy to unload them in a trade in your favor. Just send him an email at: qaplagca@yahoo.com. He'll wipe out your team set needs in no time.

Randomness 4: I've made a few small tweaks on the blog. Blogger has FINALLY provided a whole list of fonts. I have wanted this since my blog began. So, I've made some font changes and altered a few other small things in a bid to make the blog even more night owl-ish and writer-ish. I know this means nothing to those using Google Reader.

I'd like to do a little more, but the polls don't cooperate with the template designer function. Either I have to rid myself of polls altogether (perish the thought!) or tinker no more. But for the time being, I'm happy. 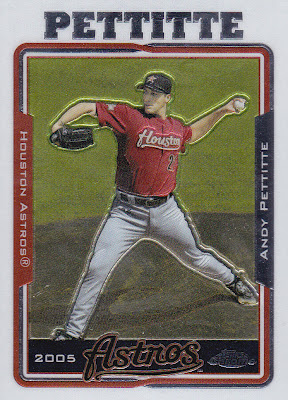 Randomness 5: I recently received a pile of Chrome from The Angels, In Order. He was giving away shininess! Can you imagine? I can't resist free Chrome. I got a bunch of cool cards, some of which I'm squirreling away for future posts and some for future trades.

By the way, the more I look at 2005 Topps, the more I like it. I absolutely hated it when it first came out. But now each time I come across a random 2005 card, it instantly draws my eye. I don't know why, but I'm starting to think Topps did a really fine job with that set. 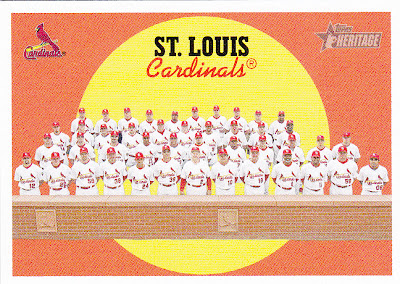 Randomness 6: After making my discovery of players with no lower extremities on the Dodgers Heritage card in the last post, I had to go through all the other team cards from '08 Heritage to see if Topps pulled the same thing with the other cards.

I don't know if I have all the team cards (there were several in the Update set, which I collected very sporadically), but just about all of them were perfect. All bodies intact. The only one that looks suspicious is the Cardinals card. The first guy in the second row appears to missing some legs. But I'm not 100 percent sure.

I guess that makes the Dodgers special. But you already knew that.

Randomness 7: This may be of interest to only me, but that's never stopped me before. A week ago, I wrote a story on an area umpire who was selected to work the Little League World Series next August. This is a big deal, because there are only eight umpires in the country and 16 in the world who get to ump the Series each year.

Well, a couple days ago, I received a thank you note in the mail from the umpire. Every once in awhile you get a thank you note or email after you've written something. It's not super rare, but it's unusual enough that you really appreciate it each time it happens.

But this one came with something else. The umpire had baseball cards -- glossy, fancy cards -- printed up of himself. He autographed one with a black Sharpie, slipped it in with the note, and sent it off to me. He has no idea that I'm a card collector, and also no idea how cool I think that is.

I won't show the card here because he's not a public person.

But thanks, Randy. Good luck in Williamsport.

Feather Chucker said…
That second card is strange. You'd think a professional photographer would have noticed the guy in the background. The batter looks like he has 4 legs.
January 22, 2011 at 6:05 PM

AdamE said…
Don't worry I'll forgive the no hot girl picture for this post cause I really don't want to see the girl you rate as a zero.
January 22, 2011 at 7:03 PM