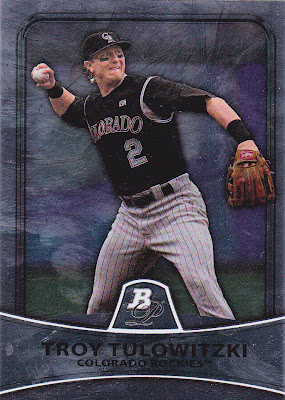 This is not out of the ordinary for me. I work nights, and sometimes the greatest part of my job is the fact that I can shop when no one else is around. This comes in handy particularly at Walmart, which appears to be inhabited by exactly 1,846 customers at every hour of every day.

The shocking thing to me is not the number, but how much each customer is purchasing. Their carts are perpetually loaded, in every check-out line, every time I walk in there. Picture little old me with a few toiletries and a rack pack of cards. Now picture someone so large that driving an SUV is a necessity. And they are buying twice their weight.

I hate entering Walmart between the hours of 8 a.m. and 10 p.m. (sometimes you'll get lucky and there is a little window of unimpeded shopping around 5:30 p.m. Sometimes).

But a Walmart at 2 a.m. is glorious. Wide aisles devoid of screaming kids and cursing adults. No inane cell phone conversations to hear. No loud teenagers to ignore. Just the humming and banging of cleaning machines and employees loading stock. It is eerie, intoxicating, and best of all, the store is 100 percent MINE.

Only one register is open, but that's all you need. I know the guy who runs the register on a first-name basis. He looks like Borat. But he's much crankier. He has to stop what he's doing -- usually unloading a pallet of anvils or something -- to ring up my pathetic purchase. He doesn't crack a smile the entire time. There was a particularly cute young lady in front of me this time. Didn't crack a smile with her either.

But I don't care about employee-customer interaction. The best part is I'm in and out of that line in 90 seconds or less. I didn't think that was constitutionally possible in Walmart.

Leave it to cards to muck the whole thing up.

Unfortunately, the one part of my 2 a.m. visit to Walmart that remains the same is my mental approach in the card aisle.

There wasn't anything very interesting there, which I knew would happen going in -- it's the reason I haven't bought many new cards since early fall. Yet, my brain is obsessed with buying something NEW and DIFFERENT. There are card sets that have items that I collect -- for example More Tales of the Game in Topps Update -- but I won't touch them because it's not NEW.

And that is how I ended up with an $8.99 rack pack of Bowman Platinum.

I've been tempted to buy this stuff for months. Even after I saw what it looked like on the blogs I still wanted to buy it. I don't collect football cards, so the concept of Bowman Platinum was new to me. When I bought the pack and opened it at home, I was unimpressed. 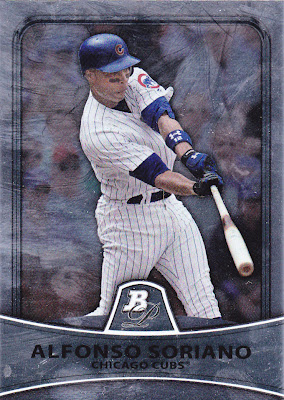 Foil-board-ish stuff. Yuck. Why do they keep doing this? It should have died with Upper Deck.

I've read reports that these cards are "sharp," and "slick." I have no idea why they'd say that. I've also read people apologizing because the cards scan crappily and look better in person. No they don't. They look as crappily as they scan. 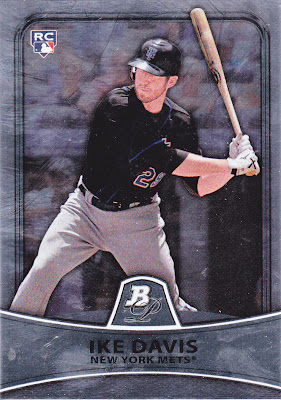 I've never been into the "silver" cards. I think it's a concept that should have stayed in the 1990s. It's another one of those cards that you have to tilt for best results. But unlike chrome it looks cheap. 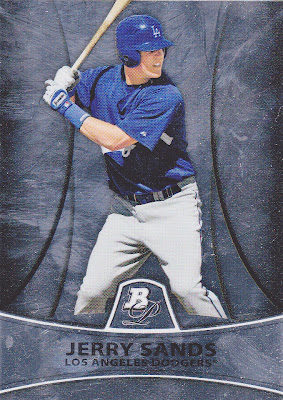 I did get a Dodger (prospect). Yay! 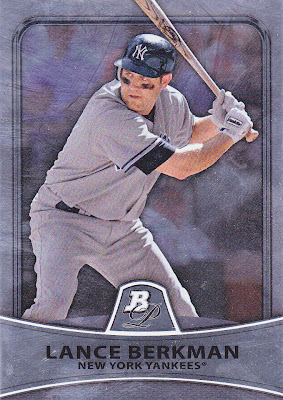 Out of the three packs the rack pack, I pulled two doubles, including Fat Elvis here. Boo! 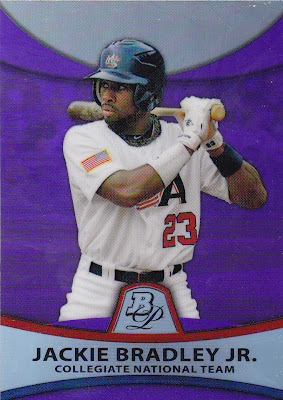 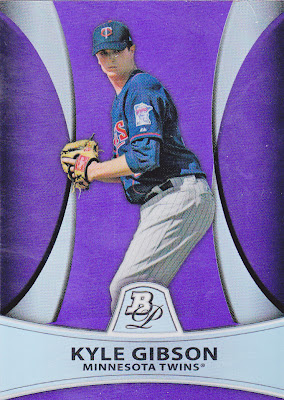 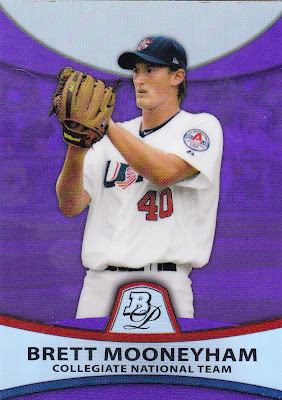 These cards, however, actually are sharp. They're the three exclusive refractors I pulled out of my rack pack.

All in all, this set is best avoided, just like everything that's sitting there on the shelves waiting for the 2011 cards to show up.

Shopping at 2 a.m., however, is pure brilliance.

SpastikMooss said…
Walmart at 2AM is indeed bliss. I remember several years back, in my undergrad glory days, there was almost nothing to do in our college town after 1AM. The last (read: only) bar closed at 1, the only food open past 1 was a 24 hour 20 minutes away...we were pretty much stuck.

Except for good old Walmart of course. As long as we had one DD and a couple bucks, Walmart with no one in it was awesome. We'd play Guitar Hero, buy 2 foot long submarine sandwiches for ourselves...man...those were the days.
January 11, 2011 at 9:25 PM

AdamE said…
My local Wal Mart has a $50 minimum on it. Meaning you can't check out with less than $50 in merchandise.

I'm a late night shopper also. Late night or early morning. WM is dead at 5AM every time.

Our night cashier is a memorable guy also. I wouldn't want to guess his weight but I don't think I would be far off if I guessed two of me. If I happen to be buying any kind of candy or snacks his eyes light up and I'm afraid my stuff will end up in his mouth rather than in my bag. Nice guy though.
January 11, 2011 at 9:29 PM

Spankee said…
I was thinking the same thing as SpastikMooss. I haven't done a 2am Wal-Mart trip since college. Those were the best of times.
January 11, 2011 at 9:50 PM

Captain Canuck said…
shopping at walmart at 2am here is called Breaking and Entering. And will result in being arrested and subsequent jailtime.

The Angels In Order said…
My local Wal-Mart stopped selling cards - too many kids, or collectors, tearing into packs and taking the good cards out. Another on the way to work just plain creeps me out, and the third near work usually doesn't have anythnig decent. I've done much better at Target in broad daylight.
January 11, 2011 at 9:57 PM

steelehere said…
Based on his minor league stats so far, I'm predicting that Jerry Sands will be one of your future Dodgers that you collect.
January 12, 2011 at 1:30 AM

Play at the Plate said…
Your giddiness at the emptiness of the store overwhelmed your common sense to stay away from that rack pack. Hopefully you can hold out for a 2011 product.
January 12, 2011 at 1:56 AM

Orioles Magic said…
I can't say I ever make it to Walmart that late at night, but I know that Friday and Saturday nights around 10-11 are a solid choice for stress-free shopping at my local mega-gigantic Wal-Mart.
January 12, 2011 at 1:08 PM