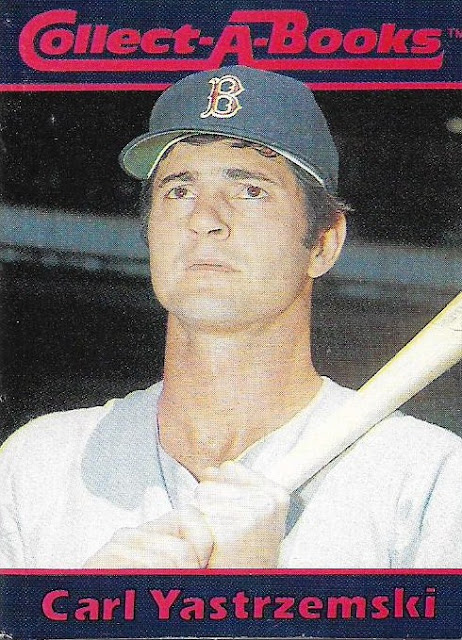 I am not a dedicated player collector because it doesn't fit into how I view baseball and how my collection reflects the history of baseball. Set collecting and team collecting, I believe, do a better job of telling you what's going on in the sport in any given year. And that's important to me.

(Confession time: I didn't pick exclusively Dodgers because my Dodgers collection is a bit, shall we say, "advanced" and the chances of claiming dupes were excellent).

I selected Carl Yastrzemski for one of my choices. Growing up in the '70s, Yaz was the elder statesman on a team that my family followed quite closely. The first Yastrzemski card I ever saw was his glorious 1976 model and there are many tributes to it on this blog. Pulling his card between 1976-83 was always a treat. He was pretty much the Red Sox to me.

Of the handful of Yaz cards Jeff sent me was this Yastrzemski 1990 CMC Collect-A-Book. I love these and they don't receive enough praise and adoration.

The Collect-A-Books were everything you wished your card could be. It included a variety of information on that player in a variety of styles. 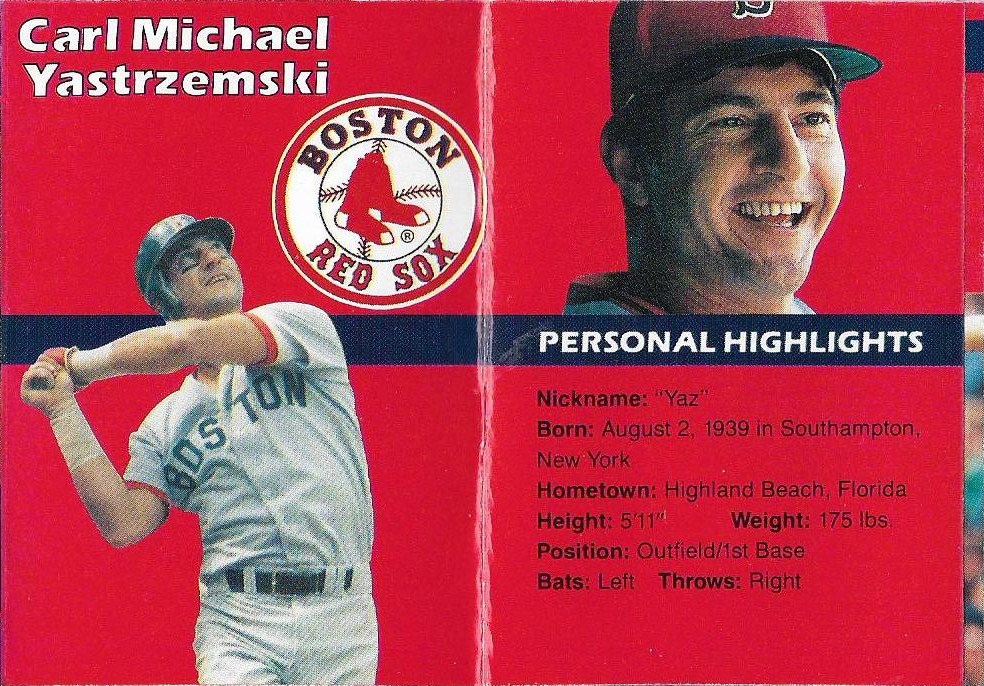 Open the first page of the book and you receive the player's full name, a team logo, an action cut-out and profile cut-out and vital stats. Plus that gleaming red background. 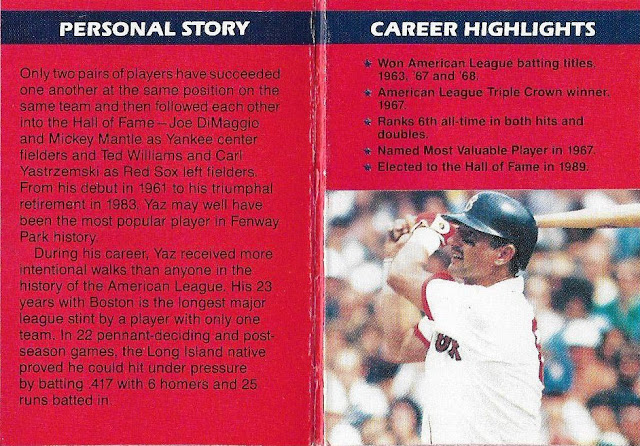 On pages 4 and 5 is a lengthy biography, career highlights and an action shot. Is that Yaz with a mustache? 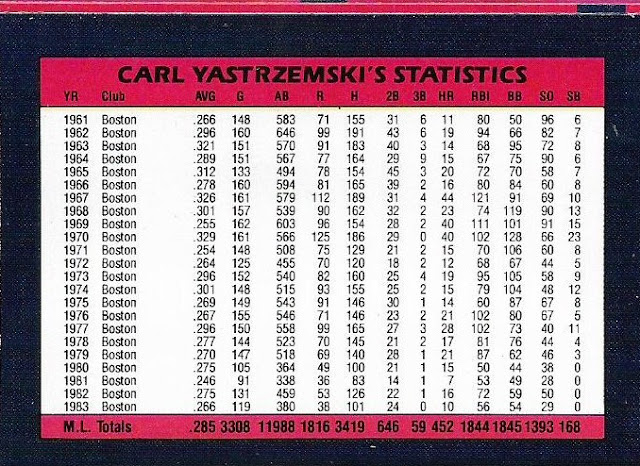 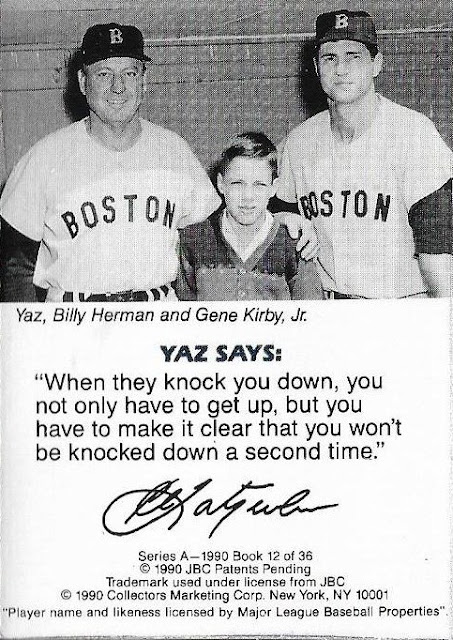 Page 7 features yet another photo and lucky Gene Kirby Jr. gets in a Collect-a-Book. The book also includes a message from Yaz and his signature. No, Yaz is not recommending you charge the mound. 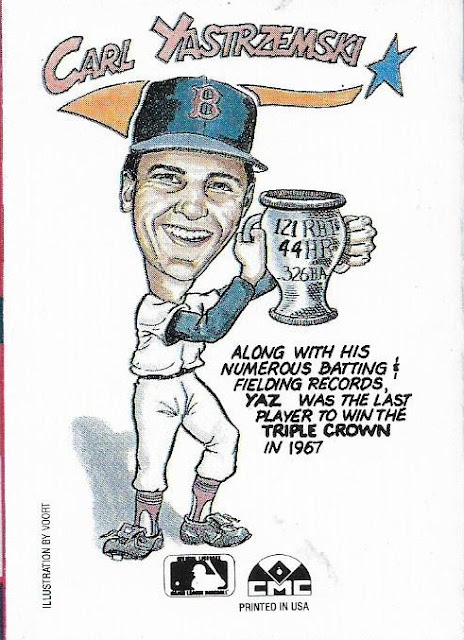 The back cover showcases a cartoon by well-known sports cartoonist Kenneth Vandervoort. I like the back covers to these Collect-a-Books. For my Dodgers, I try to collect two versions so I can store one with the cover facing out and one with the cartoon facing out.

All right, that's a lot on just one card and I didn't even discuss how they were made. Fortunately, the SABR card blog can take care of that for you. 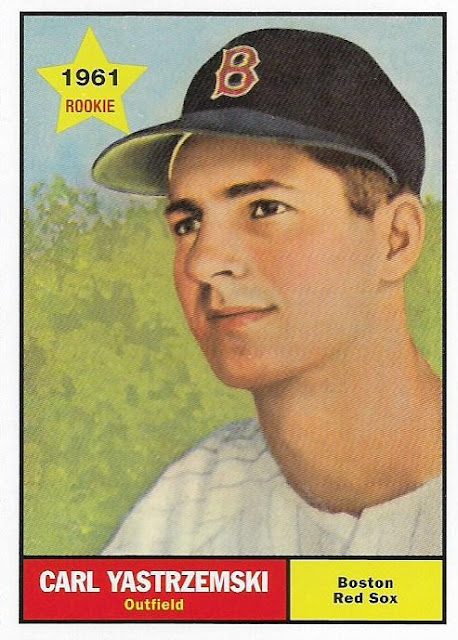 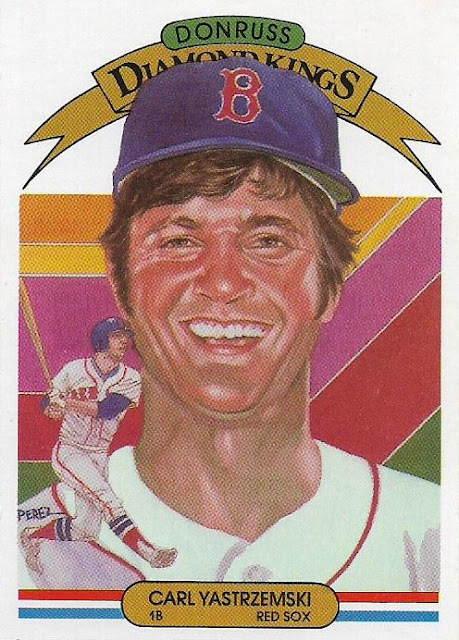 Those are the more conventional Yaz cards that arrived. The Diamond King is from 1983 Donruss. For my money only the '82 and '83 Donruss Diamond King sets are worth my hard-earned cash.

Also, don't freak out, the other card is not a pristine copy of the original '61 Yaz card. 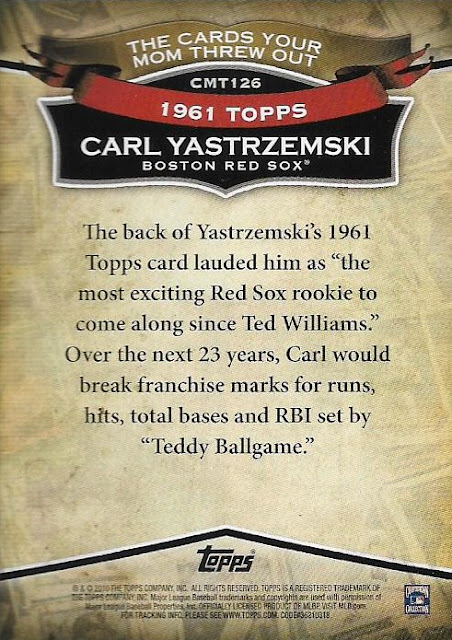 It's a card your mom threw out.

It's been a long time since I added any card to my 2010 Topps binder.

OK, I could go on and on about Yaz, but there are two other players I selected in Jeff's giveaway so let's get to those. 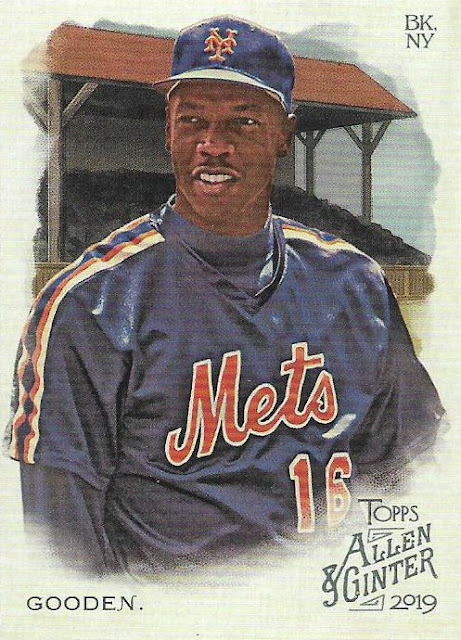 I have no choice in the matter. Gooden debuted in striking fashion when I was 19 years old (Gooden and I are the same age). You get attached to young players like that when you're that age. And I've always loved dominating pitchers. Nobody dominated like Gooden did in 1985.

The Mets of those days went head-to-head with the Dodgers in many important games and I'm happy to say the Dodgers came out on top in many of the biggest. But the days that Gooden started were always scary. I'm just happy he never no-hit my team. 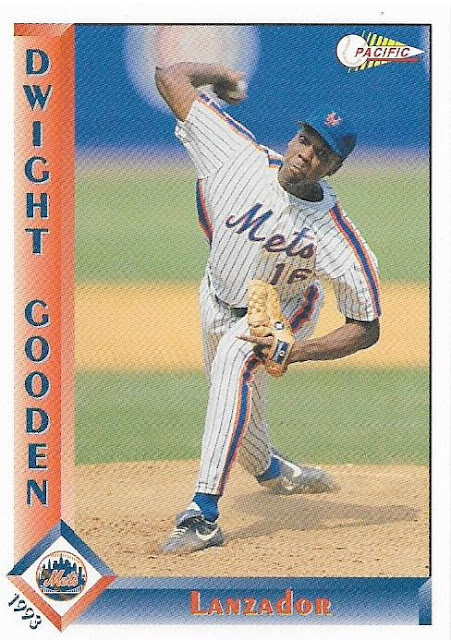 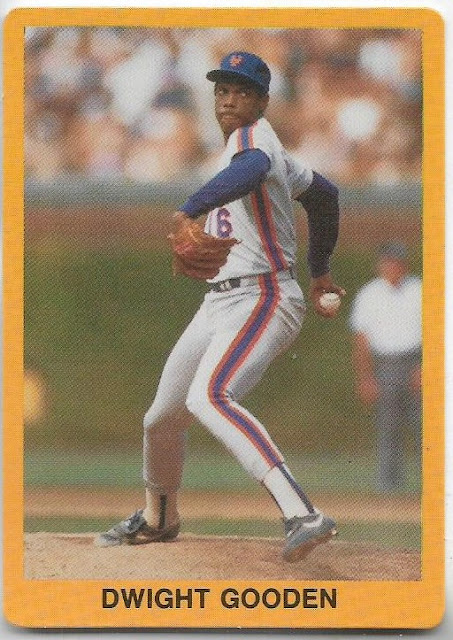 A couple more Goodens, one from 1993 Pacific and one a Broder card from 1989. These are perfect. I was half afraid I'd get a Yankee Gooden card.

OK, now for the guy I actually come the closest to player-collecting. 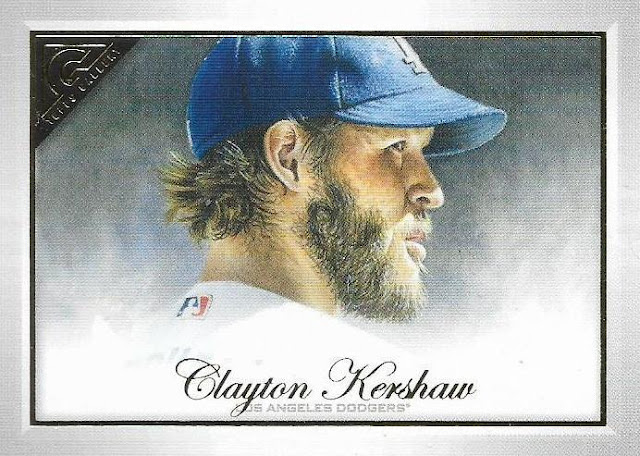 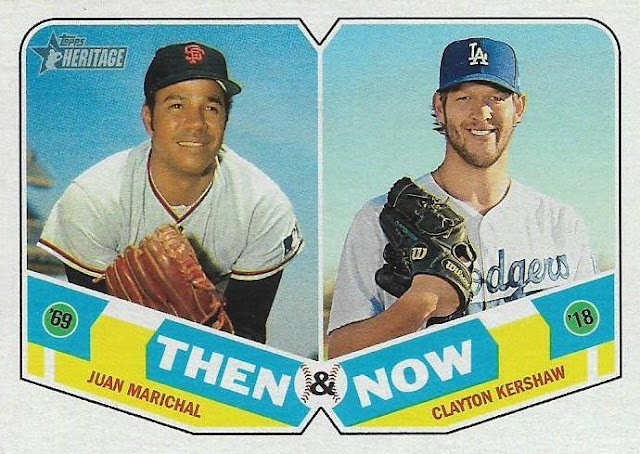 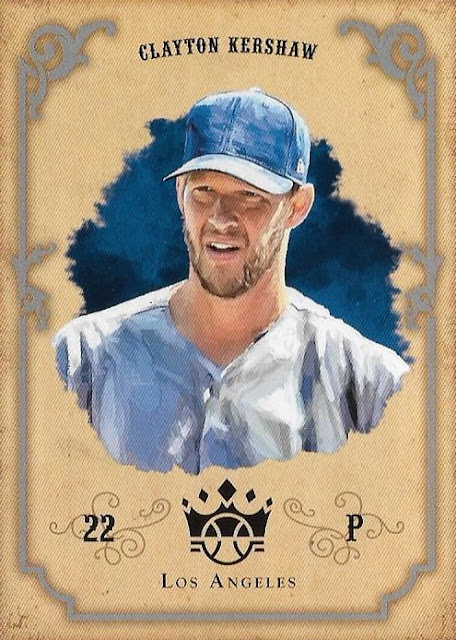 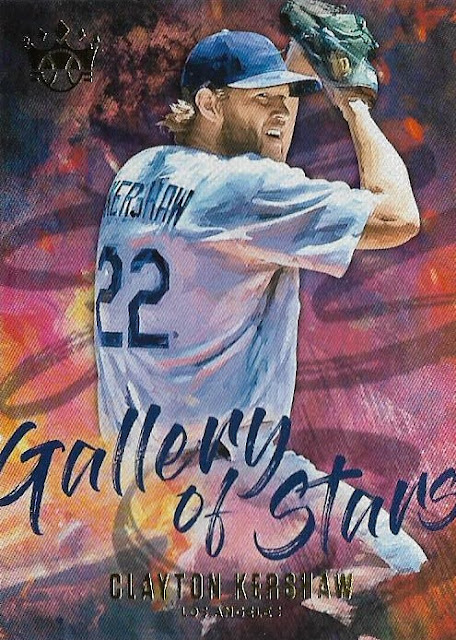 I couldn't avoid every Dodger on Jeff's list! I wouldn't be able to forgive myself if I passed up on a free Kershaw card that I needed.

It turns out I had three of the four cards sent but the last one is a new one! Yay!

Assembling some key players from other teams is fun, but I don't have a dedicated place for them like I do for my sets or team sets. I'll never create a binder titled "These Are Guys I Like" or anything like that. Instead, they'll probably go in a box with their respective set.

Maybe one day I'll create a page of nine for every key player from the '70s and '80s. OK, now that's a good idea. I like that one.

Let me file it behind the 48 other collecting tasks I have.

Jeff B - Wax Pack Wonders said…
Glad you liked the cards! Honored by an entire post centered around them! Those Collect-a-books are great, aren't they?
July 7, 2020 at 9:16 PM

Johnnys Trading Spot said…
Coming from a guy with a 1000+ PC guys, in addition to set building and team collecting I don't seek them (PC guys) out either. When I'm digging through dime boxes, I pull them, and I haven't done that in 6 months. And yeah, those guys are in my PC, lol.
July 7, 2020 at 9:36 PM

Old Cards said…
Yaz! What a great choice. I followed his career and collected his cards during the 60's. I agree with you on player collections, but Yaz is an exception for me as well and as a result, I have many of his cards from the 70's and 80's, which I have added to my 60's cards of him from my childhood.
July 7, 2020 at 10:19 PM

Commishbob said…
Yaz is one of those guys that seems to be universally liked by fans. Him, Brooks Robinson, Hank Aaron, Al Kaline...you'd never hear an unkind thing either from them or about them. The '60 Yaz is my favorite card in that set I think.
July 7, 2020 at 11:07 PM

Billy Kingsley said…
People like you and I who collect the sports, rather than just one person or team, are technically player collecting everyone in that sport. I do three sports, and yes, I must be crazy.
July 8, 2020 at 12:15 AM

Nick said…
Those Collect-A-Books are legendary to me, because they combine my two favorite hobbies: cards & books!
July 8, 2020 at 2:27 AM

Chris said…
Excellent player choices, I would have considered all three myself. Kershaw is one of a dozen non-Red Sox I collect, though I'm not much of a player PC collector.

Fuji said…
A. I love those Collect-A-Books. I've accumulated both of the MLB sets. I'd love to eventually collect the other sports too and display them in a binder for easy access.

B. I was just thinking about doing a Page of Nine project with my Oakland A's and San Diego Padres PC's... where I pick my nine favorite cards of a player and put them into a 9-pocket page.
July 8, 2020 at 10:56 AM