More cards of me 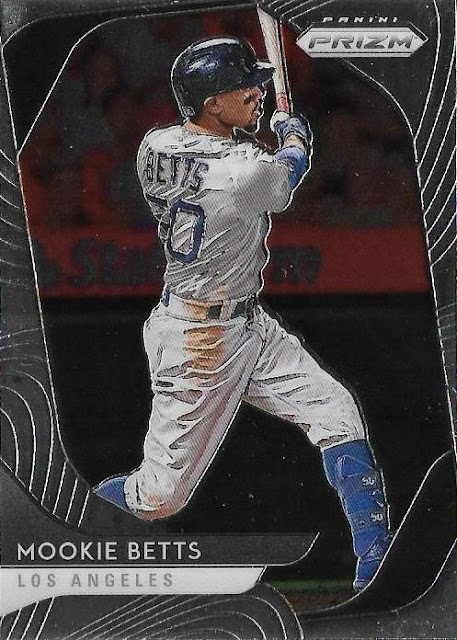 How about that Mookie Betts?

I spent a good while last night reveling in everything that people had told me all spring and into the summer:

a) Mookie Betts will never play for the Dodgers

b) Enjoy Mookie Betts' 60 games with the Dodgers.

Ha, ha! I have news of a 12-year deal for you as my response! And as for never playing for the Dodgers, perhaps you missed last night's game, in which he was instrumental in the Dodgers' 8-1 opening victory.

Just about anything good that happens this month I consider a birthday gift. It's pretty much a birthday month when your birthday is in July. I've still got stuff coming from birthday money I received, and vacations allow me to enjoy my birthday and then extend that through more time off.

And then people send me packages, which sometimes I have a sneaking suspicion are birthday-related.

Last week, while I was away for a couple of days, an envelope arrived shortly before my birthday from Rod of Padrographs. There were no birthday greetings, but I still have my suspicions. First, there was that epic birthday package from Rod last year. Second, there were several different custom cards in this package featuring, namely, me: 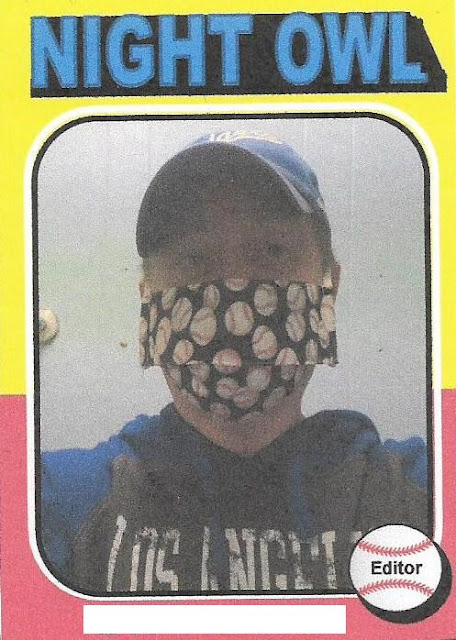 All of them use the fantastic '75 Topps design and all of them feature masked me, the photo Rod asked for a couple of months ago. All of them also show my full name which nobody needs to see in a public forum (excluding newspapers, of course).

There are several different card versions of the wording, some say "Night Owl" and some have the name of the newspaper I work for, which I guess would be my "team".

Rod asked me to autograph one of the copies, which I will be happy to do. I've autographed a couple of other cards that show me in the picture, so apparently this is a thing now. I think I have at least one or two other custom cards of myself. This card blogging is a weird business. 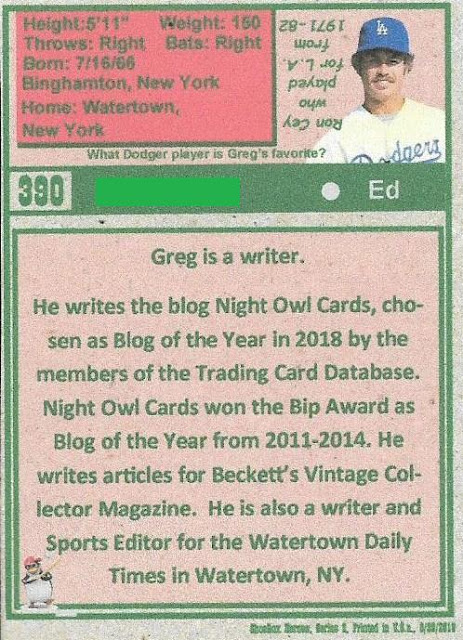 Rod also created a 1975-themed card back, because he doesn't half-ass cards like some major card company I know with their online card backs.

I like that the card features Ron Cey's card number in the '75 set and the trivia question and the write-up is completely accurate. The vitals, however, contain quite a few UERs. That's not my height (I wish), nor my weight (closer, but, again, I wish). Also, I am a lefty. That is not my birth year nor where I was born. But how could Rod know? I don't write everything about me on here.

This is a nice addition to my custom card collection, but Rod added a few modern day Dodger card collectibles, too, many of which were new to me. 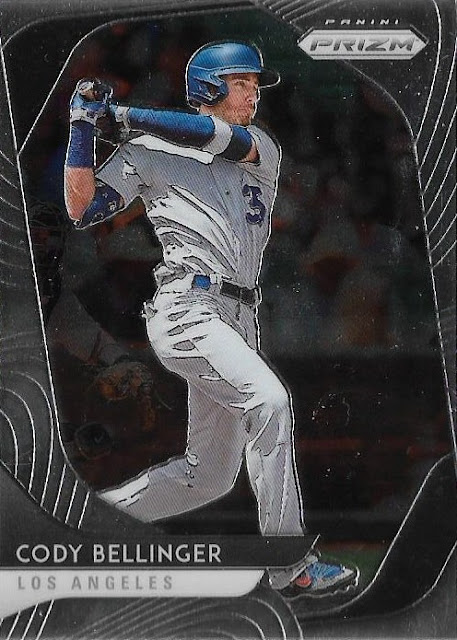 The Betts and Bellinger are my first 2020 Prizm Dodgers. The Betts is the only thing that will keep me from confusing this year with any of the other Panini Prizm years. Such a redundant-looking set. I'll never understand the enthusiasm. 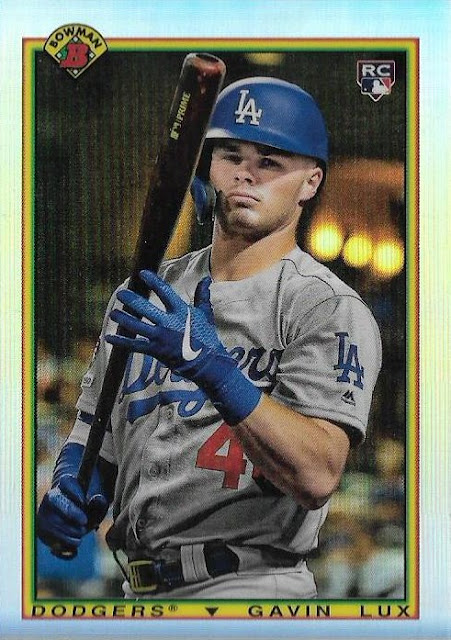 An impressive send by Rod here. Bowman is dressing up 1990 Bowman this year by issuing the design as a chromed-out insert. I have to say, it works. 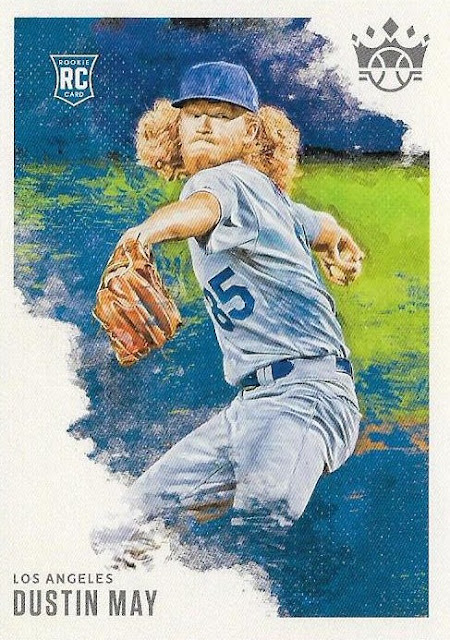 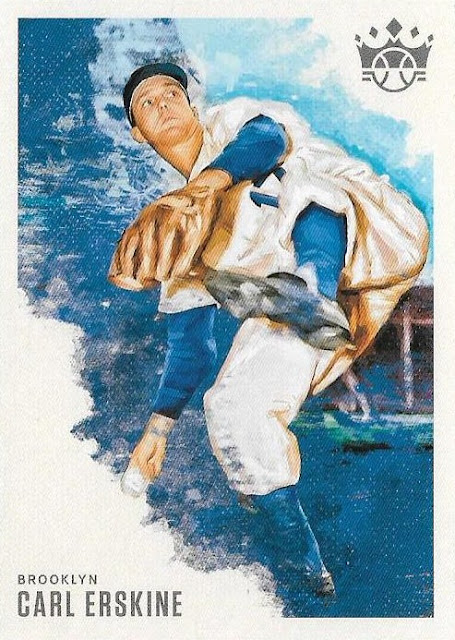 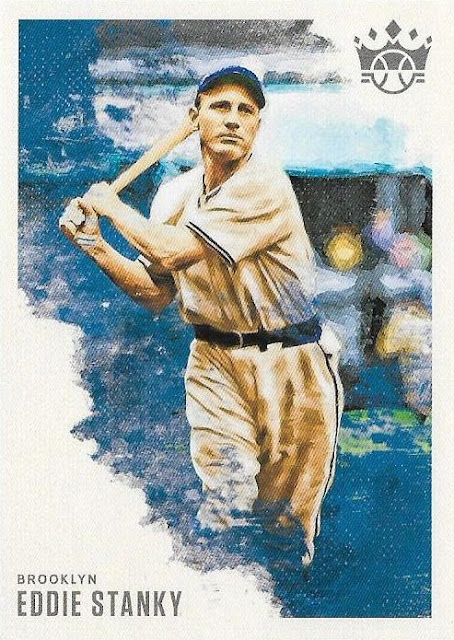 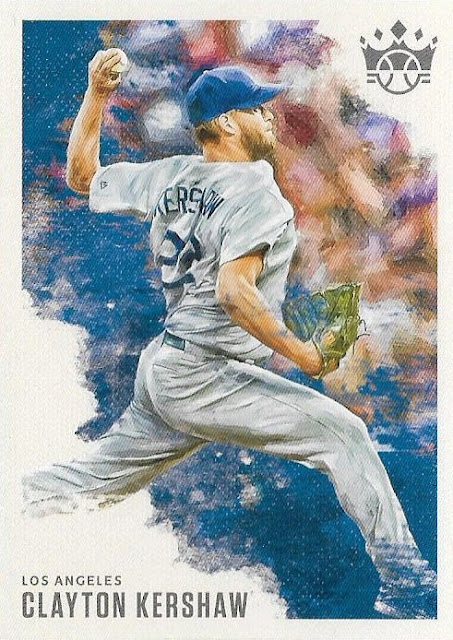 My first in-person look at Panini Diamond Kings as well. I was trying to determine the other day why these stand out a little bit over past Panini DK sets and then I figured it out: This set has borders!!!

It really makes it more pleasant to the eyes. 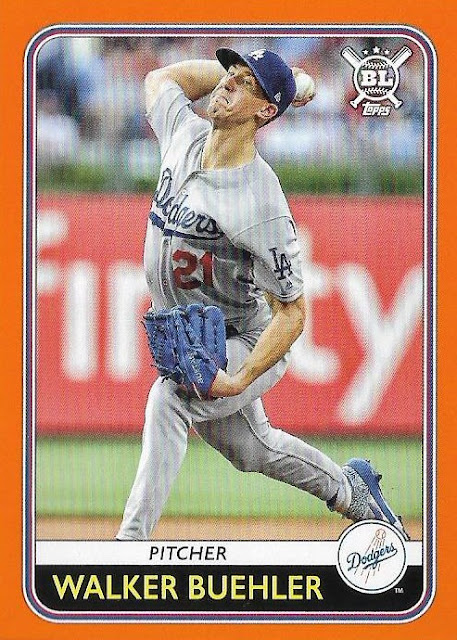 Here we go, this is a set that is my style. The orange parallels from Big League are coming in quick! 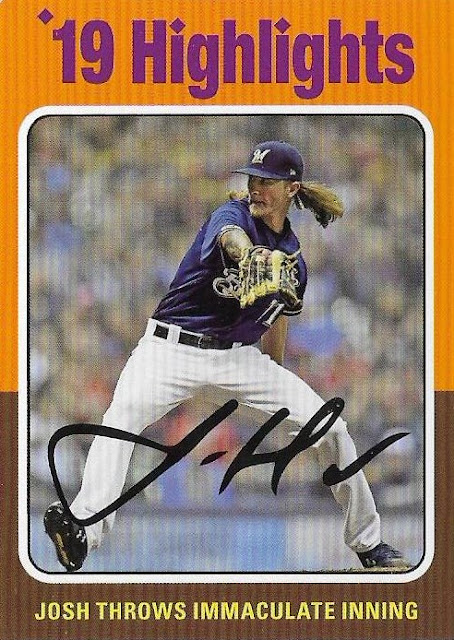 More orange. When I collected the 1975-themed portion of last year's Topps Archives set, I didn't include finding the separate '75 Highlights-style cards but I've got a few since and I might as well get them all now. 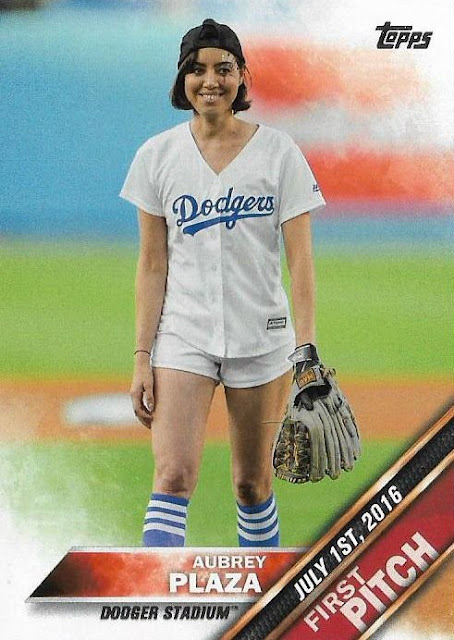 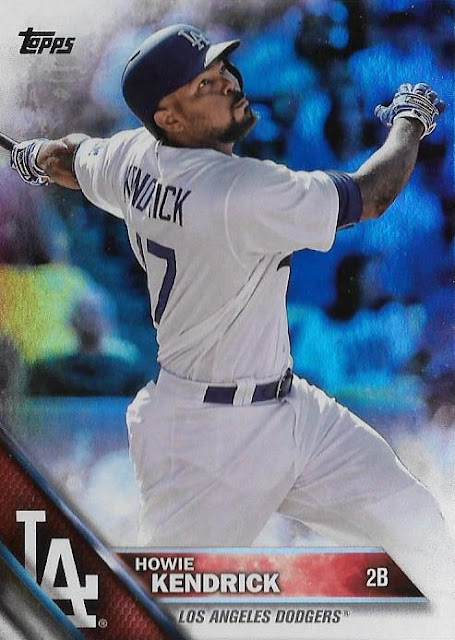 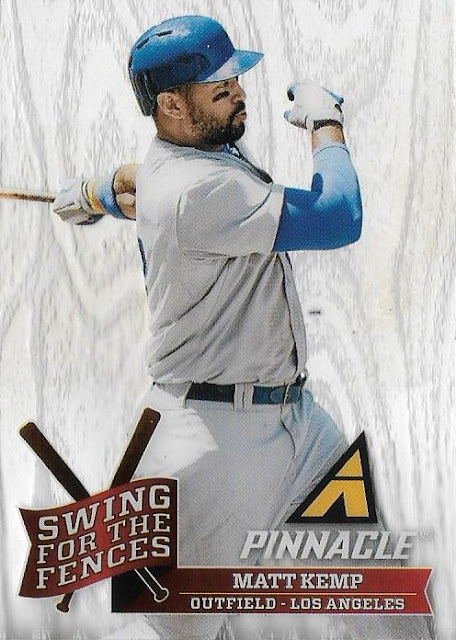 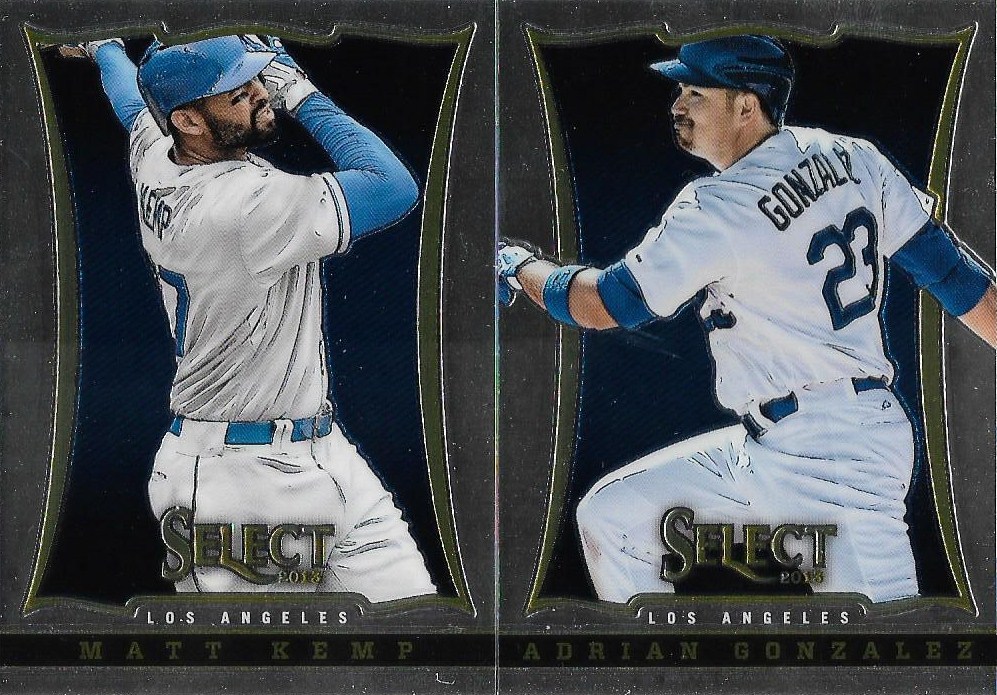 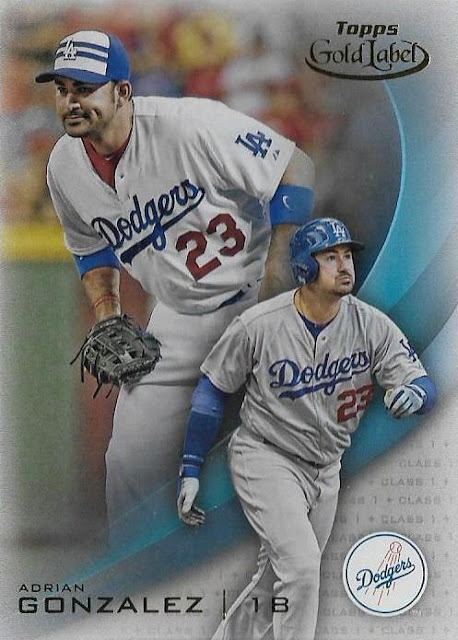 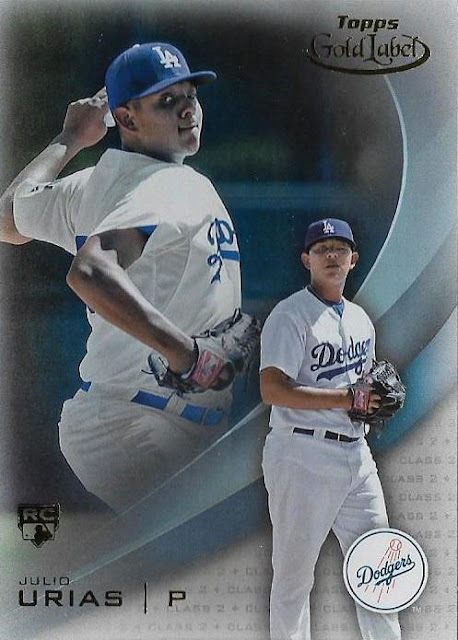 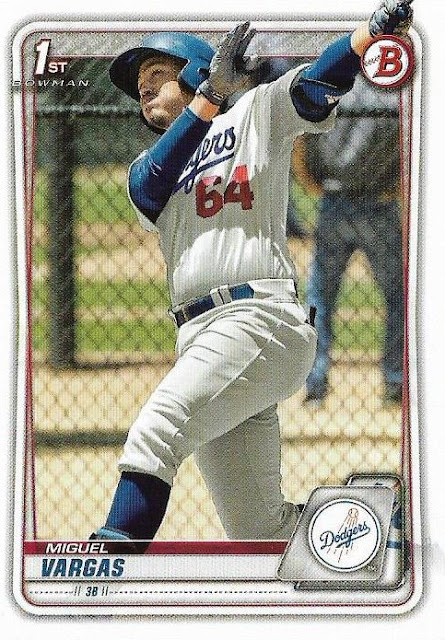 A few more cards that I needed that unfortunately I don't have a lot to say about. Simply happy to have them, even the Panini ones that cut off the tops of players' heads. 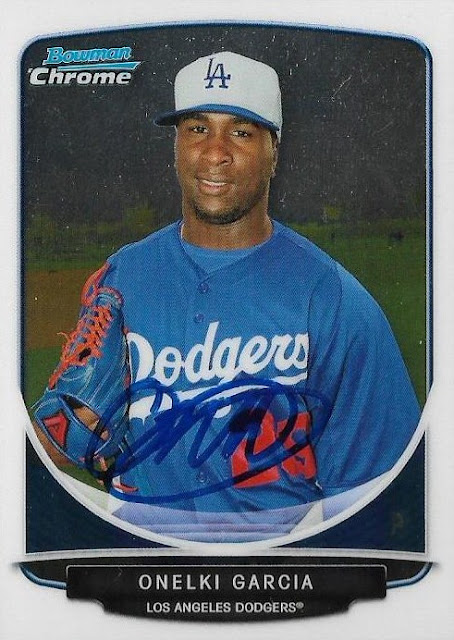 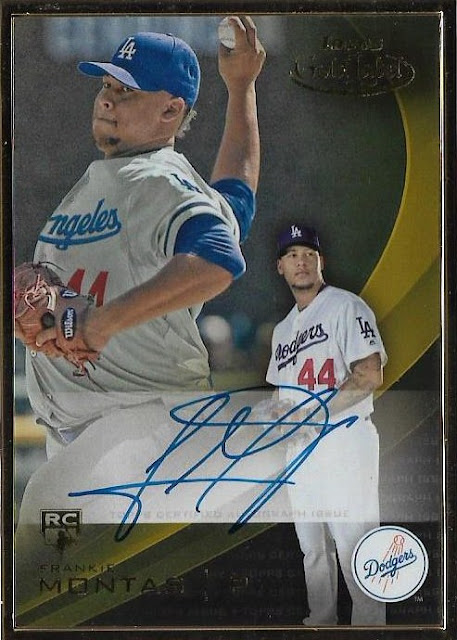 Rod is one of the foremost autograph collectors in the card blogosphere. I'm not surprised he had these couple to spare, of Dodgers short-timers. The Frankie Montas card is super fancy, with a metal gold frame and all. Seems like a lot of noise for someone who NEVER PITCHED FOR THE DODGERS.

Many thanks to Rod for the personalized custom cards. I'll get that return envelope out to you, hopefully shortly. There are games to watch now, you know.

Rod (Padrographs) said…
I was making some deductions from various blog posts that I read. Glad you liked the cards and thanks for the shout out.
July 24, 2020 at 9:21 PM

Fuji said…
Only learned about Aubrey after seeing that First Pitch card (started watching Parks & Rec after that) a few years ago. She's one of the funniest actresses I've ever seen.
July 24, 2020 at 11:44 PM

Zippy Zappy said…
I feel as though this is the fourth time you've posted a Miguel Vargas while claiming it is new to you.

Also I guarantee that you'll start to mistake that Mookie Prizm as more and more LAD era Mookie Prizm cards get released between now and whenever the LAD GM or LAD president of the future decides to trade him and the few years remaining on his deal to the Mariners.
July 25, 2020 at 2:01 PM

night owl said…
Rechecking my inventory, it appears this Vargas is a dupe. But it's the first one. It may seem like four because Bowman loves to create several iterations of the same card and confuse the hell out of everyone.
July 25, 2020 at 2:32 PM

Angus said…
It was always fun when the wrestling companies would exaggerate the size of the wrestlers. If so-and-so is 6'2, then buddy must be 6'11.

Seeing your height listed as 5'11 makes me wonder how big I am all of a sudden!